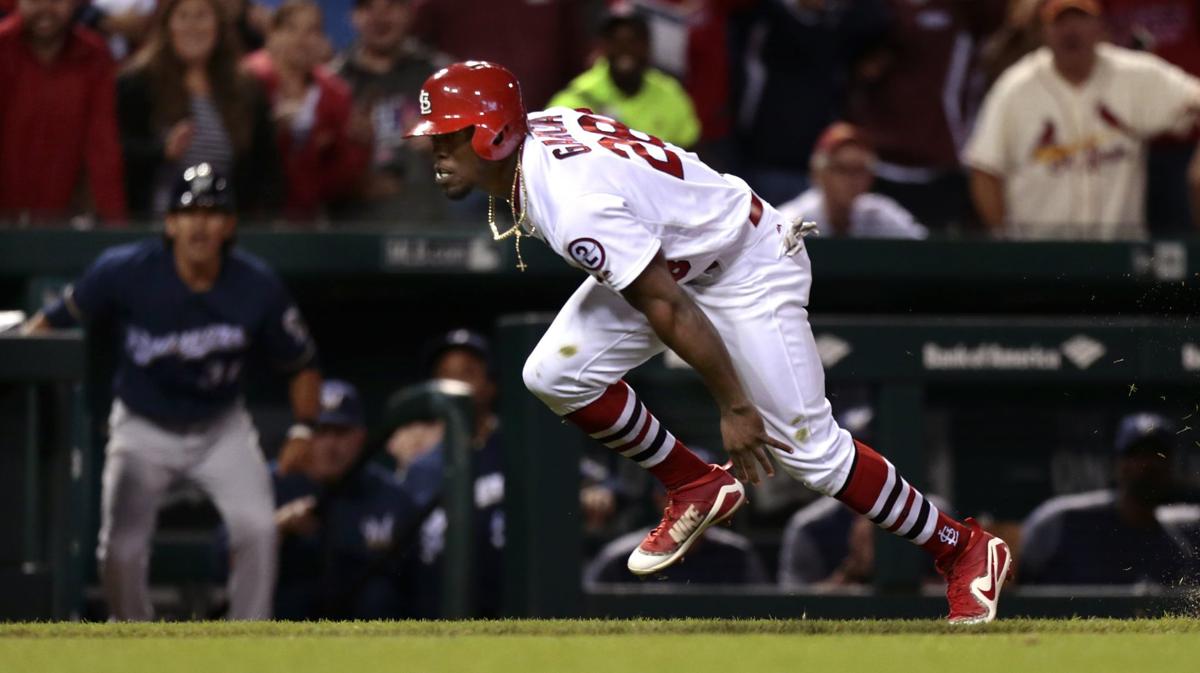 Cardinals pinch-runner Adolis Garcia tries to regain his footing after falling between third base and home in the eighth inning of the Sept. 26, 2018 game against the Brewers. Garcia was tagged out at home. Milwaukee won 2-1. Photo by Robert Cohen, rcohen@post-dispatch.com 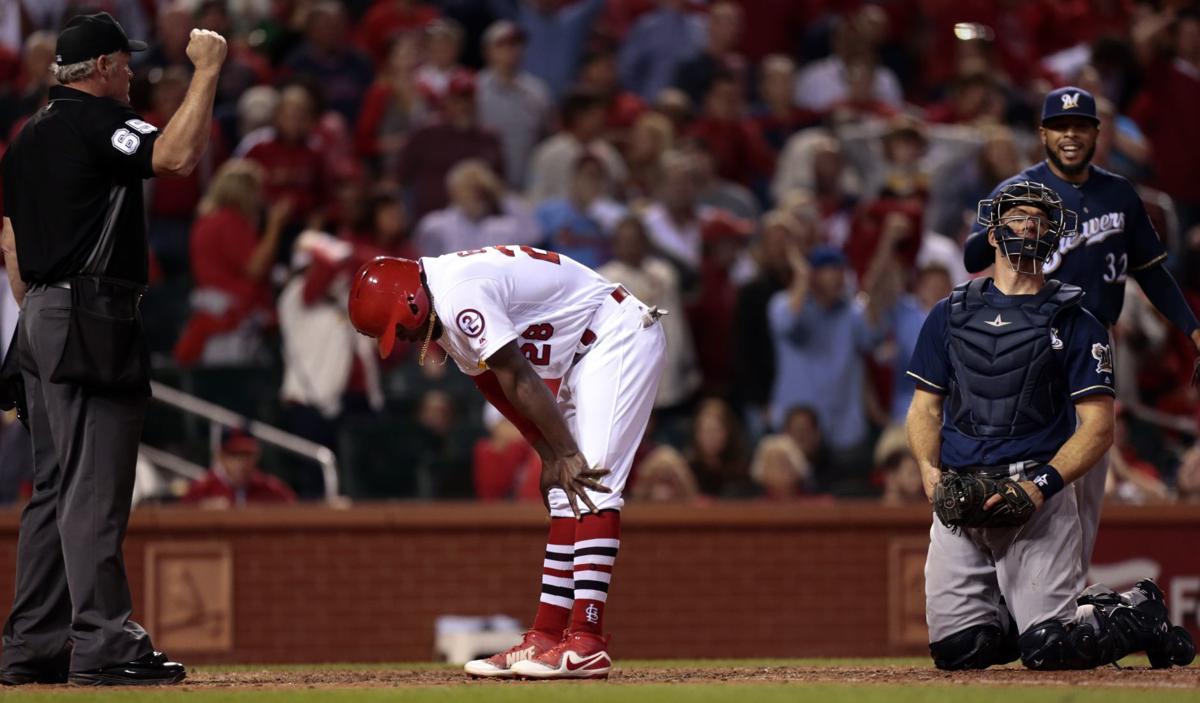 St. Louis Cardinals Adolis Garcia is out at home plate after a tag by Milwaukee Brewers catcher Erik Kratz after losing his footing running home in the eighth inning at Busch Stadium on Wednesday, Sept. 26, 2018. Photo by Robert Cohen, rcohen@post-dispatch.com

The Milwaukee Brewers clinched a playoff spot and dealt another blow to the Cardinals' postseason hopes on Wednesday, coming away with a 2-1 victory before 40,644 in the series finale at Busch Stadium.

With the series sweep, the Milwaukee improved to 92-67 and have assured itself of at least a spot in the NL wild-card game.

Wednesday's crowd of 40,644 pushed the Cardinals' attendance for the season to 3,403,587. They top the 3-million mark for the 15th consecutive year and for the 22nd time overall. It's the ninth-highest attendance mark in franchise history.

The Cardinals rank third, behind the Los Angeles Dodgers and New York Yankees, in MLB attendance this season and, with 95.6 percent, are No. 1 in stadium capacity sold.

The Brewers broke on top Wednesday with a run in the third inning.. Christian Yelich walked with one out, took third on a Jesus Aguilar hit and scored when Travis Shaw blooped a single to right. On the play, Jose Martinez made a strong throw to Jedd Gyorko at third, cutting down Aguilar as he tried to go first to third.

The Cardinals, who were held without a baserunner by Milwaukee starter Jhoulys Chacin through the game's first three innings, responded in the fourth to even the score at 1. Matt Carpenter led off with a walk and raced to third an out later on a shot past third from Paul DeJong. After Marcell Ozuna walked to load the bases, Jedd Gyorko tied it with a sacrifice fly to left.

On Tuesday night, Gyorko went 0 for 3, leaving the bases loaded twice and stranding eight runners in a 12-4 loss.

In the Milwaukee fifth, after starter John Gant retired Lorenzo Cain to open the inning, lefty Chasen Shreve took for Gant and promptly walked MVP candidate Yelich. Righthander Dakota Hudson entered and got Aguilar on a tapper in front of the mound, but Shaw followed with another run-scoring bloop hit, this one to left, that put the Brewers back on top again at 2-1.

The home team threatened in the sixth. With one out, Martinez reached on a dropped fly ball by Ryan Braun in left and DeJong was hit by pitch. But Ozuna's liner to second resulted in an inning-ending double play.

With two out in the bottom of the eighth, Carpenter walked and was replaced by pinch-runner Adolis Garcia. Martinez followed with a topper down the third-base line for a hit. The throw from third baseman Mike Moustakas was wild past first, but as Garcia came around third, he fell after losing his balance and was thrown out at the plate on a relay from second baseman Hernan Perez to catcher Erik Kratz.

The Brewers, who stranded eight runners, outhit the Cardinals 5-2, getting two hits and two RBIs from Shaw. Chacin (15-8) and four Brewer relievers combined for the two-hitter, striking out nine, walking three and hitting one man. Jeremy Jeffress finished up, picking up his 17th save.

GANT GETS START IN HOME FINALE

Coming off 6-4 and 12-4 losses, the Cardinals  look to salvage the final game of the series with the Milwaukee Brewers when the teams square off at 6:10 p.m. Wednesday in the final regular-season game at Busch Stadium in 2018.

The Chicago Cubs (91-66) lead the NL Central; they're ½-game ahead of Milwaukee and hold a 4½-game lead over the Cardinals.

To close out the season:

• The Cubs host Pittsburgh (80-76) Wednesday and Thursday before taking on the Cardinals.

Simply put, the Redbirds have some work to do. And will also need some help.

“At this level, when the guys over there click like they did, there's not much you can do,” Cardinals second baseman Kolten Wong said. “It's one game _ they're all important games right now _ but we still have four games to go. For us, this has been a whirlwind of a year; we're still confident in ourselves, feel we have a lot more to give... With this schedule, it's all about earning it right now. You look at who everybody else is playing the rest of the season and ours is definitely the toughest. That's what we want. If we can make it to the postseason, we want to have these games kind of break us in for postseason baseball.”

Wong added: “Obviously, we're not excited with the way this series has started, but we're still in it. We're still confident in each other, ready to go out there and compete every single day. It's just a matter of putting some things together and getting back on the roll that we've been on.”

“I think if you look at it, this team's in a pretty good spot, won 14 of its last 18 series,'' the manager said from the dugout before Wednesday's game. “This team, like any team, is going to have a little adversity. You look at it, we've answered the bell in resounding fashion pretty much every time. We're embracing it and looking forward to tonight.”

On Wednesday, the Cardinals will turn to righthander John Gant to start the regular-season home finale. He's been quietly solid this season, going 7-6 with a 3.53 earned-run average, but the 26-year-old has not completed five innings in three of his last four starts.

“I expect him to throw strikes, to control counts,'' Shildt said. “The thing about John that's so wonderful is that he's got multiple pitches. He's been working his fastball, he's got a breaking ball, he's got a changeup, so, righty or lefty, he's got weapons for each of them.”

The Brewers, who have won their last three, will counter with righthander Jhoulys Chacin (14-8, 3.61), who has a 6.10 ERA in 10 career games against the Cardinals. But on Aug. 19 at Busch, the 30-year-old threw six scoreless innings, allowing four hits with three strikeouts and no walks, in a 2-1 Brewers victory.

Shildt said he had no regrets about being tossed Tuesday following the ejection of Matt Carpenter in the seventh inning.

“I'm a big control-your-emotions person; one of the few times you'll see me get a little sideways about anything is if you mess with the people I care about and I feel there's some injustice taking place,” Shildt said. “You don't mess with family. It doesn't happen a lot but when it does you handle it appropriately and still be in control of your emotions while being assertive in the way I felt.”

Cardinals pinch-runner Adolis Garcia tries to regain his footing after falling between third base and home in the eighth inning of the Sept. 26, 2018 game against the Brewers. Garcia was tagged out at home. Milwaukee won 2-1. Photo by Robert Cohen, rcohen@post-dispatch.com

St. Louis Cardinals Adolis Garcia is out at home plate after a tag by Milwaukee Brewers catcher Erik Kratz after losing his footing running home in the eighth inning at Busch Stadium on Wednesday, Sept. 26, 2018. Photo by Robert Cohen, rcohen@post-dispatch.com