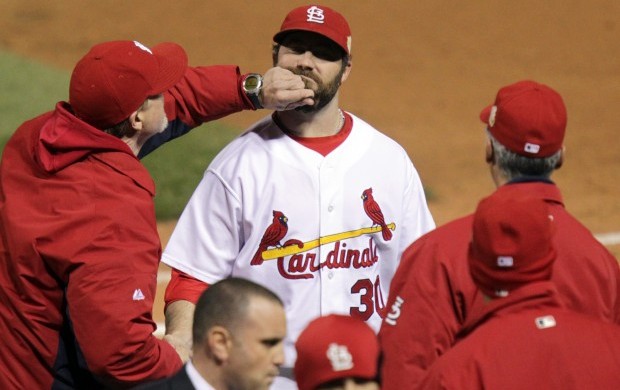 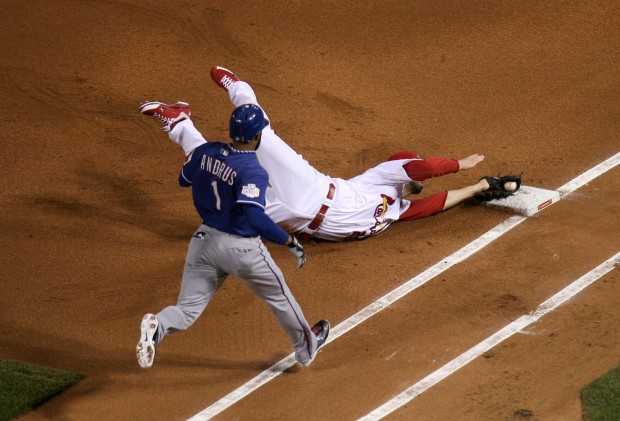 First baseman Albert Pujols tosses the ball to pitcher Chris Carpenter, who beats Elvis Andrus with a dive to first base for an out during the first inning of Game 1 of the World Series between the Texas Rangers and the St. Louis Cardinals Wednesday, Oct. 19, 2011, at Busch Stadium in St. Louis. Photo by Laurie Skrivan, Lskrivan@post-dispatch.com

On a four-letter night spelled c-o-l-d, Chris Carpenter responded to the first question of a closely matched World Series.

He answered loudly, sometimes profanely and once with his face planted beside the first-base bag. Ultimately he held the Texas Rangers' offense long enough to see a sixth-inning pinch RBI and three innings of shutout relief translate into a 3-2 Cardinals win in Game 1 at Busch Stadium.

For the seventh consecutive game the Cardinals scored first. For the fourth time this postseason they won with Carpenter on the mound. And once again they stifled an intimidating opponent by whipsawing them with their bullpen.

"Got to give them credit, they beat us," Rangers manager Ron Washington said. "We didn't give that game away tonight."

If not for catcher Mike Napoli's two-run, game-tying home run in the fifth inning, Carpenter may have produced his second scoreless outing of the postseason.

Instead, he settled for a historic win on a night that drove him to scream in frustration, make a leaping catch before diving for a first-inning out and succeed without his full arsenal.

"It was a great performance," manager Tony La Russa said. "They have a very good hitting team. If you don't make a lot of pitches they're going to bang your around."

A central question after alternating between brilliant and abbreviated starts his last four outings, Carpenter provided six reassuring innings on an unforgiving night that began with the temperature at 49 degrees.

Carpenter missed with consecutive pitches to the first four hitters he faced. Three of the Rangers' first six hitters reached. Yet a first-inning assist from catcher Yadier Molina that snuffed Ian Kinsler on a botched hit-and-run for the game's first out and a second-inning double play averted damage.

The Cardinals escaped Carpenter's five-inning outing in Game 3 of the National League championship series with a 4-3 win. His right elbow since became the subject of much attention, swelling enough to cause concerns about his fitness to pitch a possible Game 7. The Cardinals eliminated the scenario via a 12-6 win over the Brewers in Game 6.

La Russa had insisted during the NLCS that he would pitch Carpenter on three days' rest. He insisted that he harbored no concern if Carpenter was needed on Monday. Finally, he simply handed his ace the ball on six days' rest.

Carpenter responded with the Cardinals' first quality start since his three-hit shutout of the Philadelphia Phillies in Game 5 of the Division Series.

The Cardinals opened the series' scoring with a two-run fourth inning that began with Wilson plunking first baseman Albert Pujols on the left foot followed by left fielder Matt Holliday dropping an opposite-field double to advance Pujols to third base.

Right fielder Lance Berkman exploited the chance with a righthanded cue shot that appeared to bounce in foul territory then squib past first baseman Michael Young in fair territory, scoring both runners.

The Cardinals had more chances against the lefthander Wilson, who walked six and hit a batter in addition to surrendering four hits. They produced baserunners in every inning except the seventh. In four of the first five innings, the Cardinals' leadoff hitter reached against Rangers starting pitcher C.J. Wilson.

The Cardinals have won each of Carpenter's four starts this postseason. He has received three of the decisions, moving him past Bob Gibson for most postseason wins (eight) in franchise history. More important than a career record was the staff ace pushing his team to its first series-opening win this month.

Carpenter helped himself by making a diving catch of Pujols' first-inning feed from the first-base hole. Carpenter's dive left his right hand and head exposed as he tagged the bag with his glove while shortstop Elvis Andrus rumbled by.

Pujols assisted Carpenter on his final out when, with the tying run at third base, he stopped Michael Young's grounder and threw to Carpenter covering.

After experiencing a six-game NLCS that produced one quality start for either side, the Cardinals stopped Rangers lefthander C.J. Wilson one out short of reaching the threshold.

Third baseman David Freese ran his postseason hitting streak to 11 games when he launched a one-out double to right field then took third base on Wilson's 0-2 wild pitch against Molina.

Wilson erased Molina for the inning's second out before all but intentionally walking eighth place hitter Nick Punto to set up a tactical exchange. La Russa pinch hit Craig for Carpenter and Rangers manager Ron Anderson to counter with hard-throwing beanpole Alexi Ogando.

Ogando quickly pushed ahead of Craig, blowing a 97-mile-per-hour fastball by him for a second strike. However, Craig, who may become La Russa's silver bullet in this series, won the duel by lining a ball to right field that Cruz had deflect off the tip of his glove and his left instep.

"He was my best pitcher I felt in that situation," Washington said about Ogando. "You have to give Craig credit. He beat him."

Craig's RBI put the Cardinals ahead by one run and made Carpenter the pitcher of record. La Russa then introduced his bullpen into a game that ended with three dominant frames.

Fernando Salas wobbled during the seventh inning but was bailed out by lefthander Marc Rzepczynski striking out consecutive pinch hitters. Octavio Dotel and Arthur Rhodes worked a quick eighth inning before Motte finished.

First baseman Albert Pujols tosses the ball to pitcher Chris Carpenter, who beats Elvis Andrus with a dive to first base for an out during the first inning of Game 1 of the World Series between the Texas Rangers and the St. Louis Cardinals Wednesday, Oct. 19, 2011, at Busch Stadium in St. Louis. Photo by Laurie Skrivan, Lskrivan@post-dispatch.com