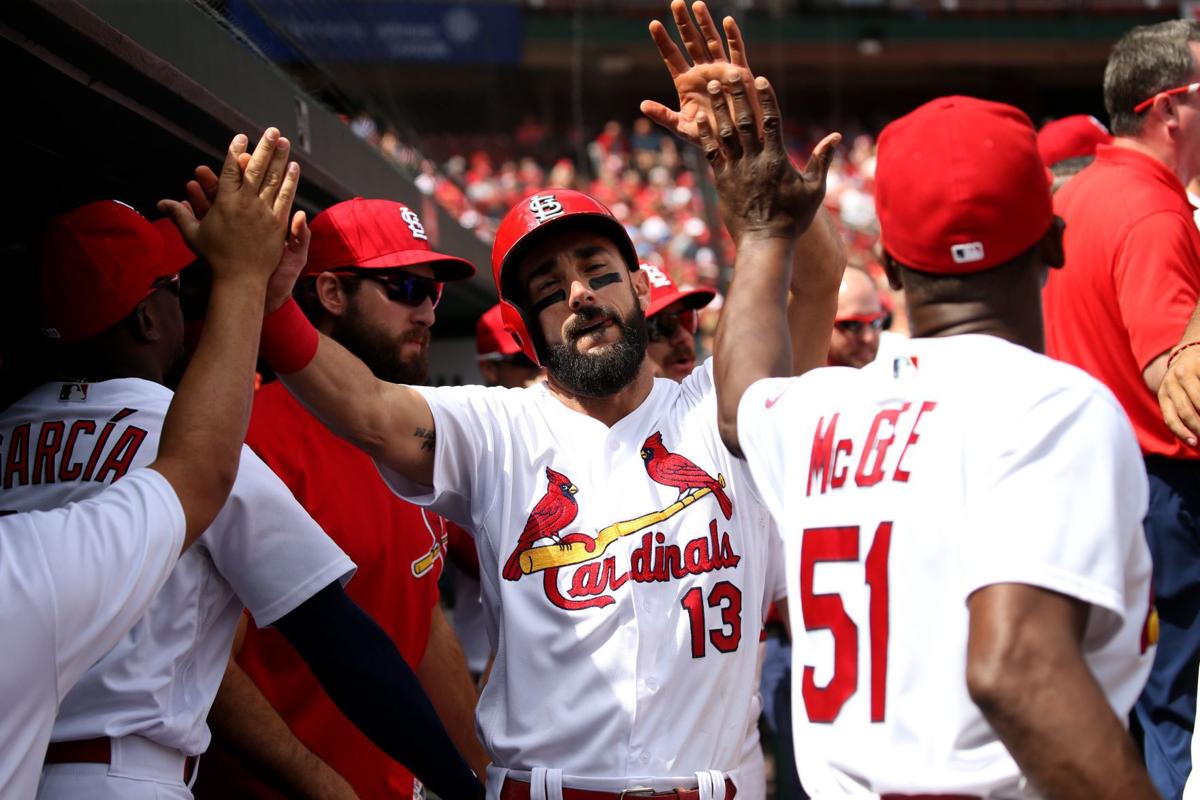 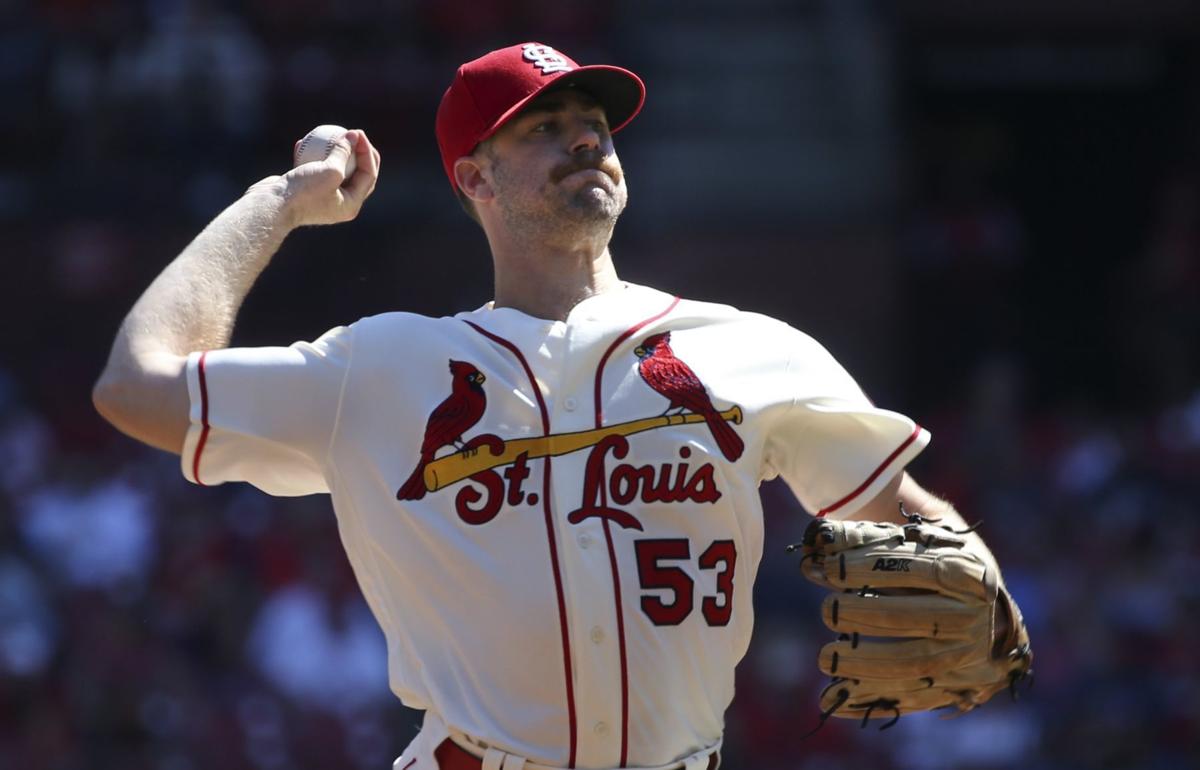 St. Louis Cardinals starting pitcher John Gant (53) throws a pitch in the first inning during a game between the St. Louis Cardinals and the Los Angeles Dodgers at Busch Stadium on Saturday, Sept., 15, 2018, in St. Louis, Mo. Photo by Laurie Skrivan, lskrivan@post-dispatch.com

Matt Adams, sent up as a pinch hitter with two on and two out in the eighth inning of a 3-3 game Friday game, looked behind him toward the dugout at Busch Stadium when the San Francisco Giants brought in lefthander Tony Watson, who had fanned Adams six times in 11 career at-bats with just two Adams hits to offset those whiffs.

But righthanded-batting Yairo Munoz, who might have hit for Adams, had had to come into the game at second base in the top of the inning when Kolten Wong left with cramping. The Cardinals were left with three righthanded options _ backup catchers Francisco Pena and Carson Kelly and rookie Adolis Garcia, who was two for 16.

So Adams stayed. And Adams starred. Adams fisted a two-run double past third baseman Even Longoria to drive in both Harrison Bader and Munoz as the Cardinals remained on the right path to the wild card with a 5-3 win over the Giants.

One of the advantages of a 14-man bullpen for September play is that none of the relievers should be all that tired and you can use them as early as you want to. Exhibit A is the Cardinals’ relief corps, pressed into service beginning in the third inning Friday night after starter John Gant had walked three consecutive San Francisco batsmen to force in the tying run.

Veteran Tyson Ross, who hadn’t pitched in eight days, entered the inning to record a strikeout to end the inning and fanned three more while pitching 2 1/3 scorless innings. Rookie Dakota Hudson, who had worked only 1 2/3 inning in a week, struck all three men he faced in the seventh.

Fireballer Jordan Hicks, who had pitched only twice in 12 days, gave up two runs in the seventh but John Brebbia, used only twice since last Thursday, also struck out the side in the Giants’ eighth. And Carlos Martinez, celebrating his 27th birthday, recorded his fourth save as a sellout crowd of 45,892 got its money’s worth.

With the schedule shortening to nine games, six of which are at home, the Cardinals' route to their first playoff appearance since 2015 has gained clarity.

They are, squarely, in a race for the second wild-card berth with the team that does not win the National League West.

The Los Angeles Dodgers' sweep of the Colorado Rockies this week moved LA ahead of Colorado in the NL West standings and allowed the Cardinals, with two wins in Atlanta, to increase their lead on the Rockies for the second wild-card berth. The Cardinals have a 1½-game lead on the Rockies. They trail Milwaukee by three games for the first wild-card berth. The Cardinals can keep pace with the Brewers this weekend and have a crack at catching them when they visit for a three-game series to close the 2018 home schedule next week.

The most direct path to the postseason is vs. the Rockies at this point.

The Cardinals need only to have the same record as Colorado from here and they'll secure a berth in the postseason. Colorado faces Arizona while the Cardinals host the Rockies' rivals, the San Francisco Giants.

Back from his break in Atlanta, Matt Carpenter is leading off and playing first for the Cardinals. Their biggest hurdle in this series might be the first one as Carpenter will face in the bottom of the first inning lefty Madison Bumgarner. In nine starts against the Cardinals, Bumgarner is 4-5 with a 4.61 ERA -- though the bulk of that damage has been done against him at AT&T Park in the Bay Area.

At Busch Stadium, the lefty has been more MadBum-er.

Carpenter is one of the Cardinals with success in limited at-bats against Bumgarner. He's three-for-five with two doubles, and the only times Bumgarner has retired Carpenter it's been by strikeout. Cleanup hitter Marcell Ozuna is four-for-12 against the Giants' lefty with a home run and three strikeouts. There will probably be some strategic pitching around Ozuna given how the Cardinals have set up the lineup and who is immediately behind the Cardinals' left fielder. Jedd Gyorko has the most experience against Bumgarner --- and he least success. He's struck out seven times in 18 at-bats. He has three hits in those at-bats. All singles.

Additionally, Jose Martinez and the Cardinals have worked out an agreement to offer specially priced tickets for the upcoming series against the Brewers that will aid Martinez's efforts to help his home country of Venezuela. Political strife, violence, and socioeconomic crises have engulfed Venezuela, and for much of the season Martinez has tried to come up with ways to assist or draw the Cardinals into a cooperative effort.

The Cardinals are offering $10 tickets, and according to a release on the subject are pledging 75 percent of the sales to Martinez's "relief effort." The team is partnering with Charity Navigator, an organization that works with more than 110 countries.

Charity Navigator will distribute in Venezuela what the ticket-sales program is able to generate for Martinez.

Tyler O'Neill's first career game-winning home run vaulted the Cardinals to a 5-4 victory against San Francisco at Busch Stadium in what could be Adam Wainwright's final start as a Cardinal at the ballpark.

BenFred: Time to admit Brewers topped the Cardinals with their trade for Yelich?

Luke Voit has homered his way onto the front of the New York City tabloids and into the fickle hearts of Yankees fans.

As the Cardinals pursue a berth in the playoffs for the first time since 2015, the bat acquired to drive them back to October has arrived, as advertised. Marcell Ozuna has hit with more power more consistently since treatment in late August for his shoulder injury.

ATLANTA • After Matt Carpenter salvaged a three-strikeout game Tuesday by taking a walk and scoring a run, manager Mike Shildt asked him to st…

St. Louis Cardinals starting pitcher John Gant (53) throws a pitch in the first inning during a game between the St. Louis Cardinals and the Los Angeles Dodgers at Busch Stadium on Saturday, Sept., 15, 2018, in St. Louis, Mo. Photo by Laurie Skrivan, lskrivan@post-dispatch.com