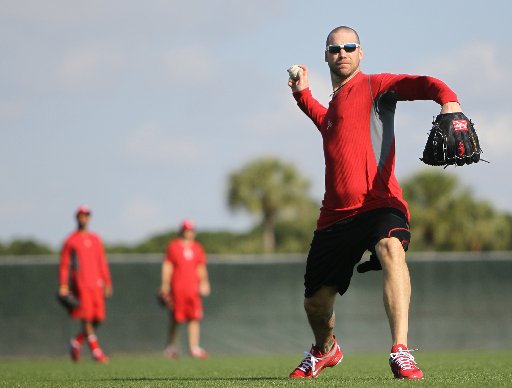 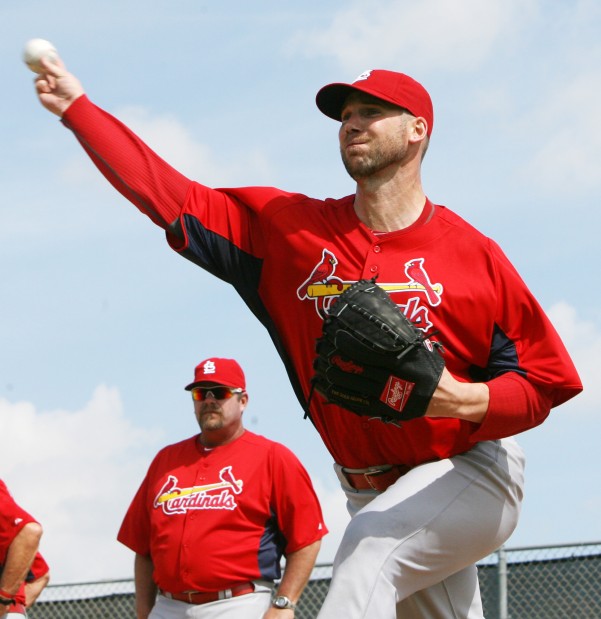 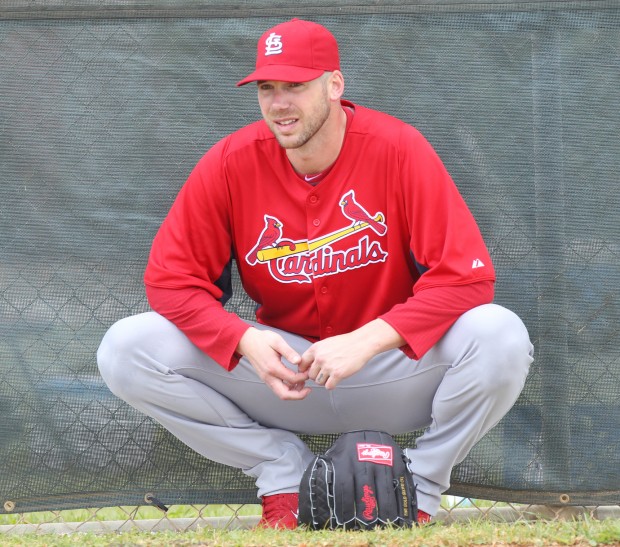 Cardinals pitcher Chris Carpenter has proved the skeptics wrong before by returning from injuries and returning to form. Can he do it again? (Photo by Chris Lee, clee@post-dispatch.com)

As recently as last weekend the Cardinals advertised hope that Carpenter would be available to make an April 4 Opening Day start against the Miami Marlins. That responsibility now appears to rest with Kyle Lohse, who worked against the Houston Astros in Kissimmee on Tuesday.

Lance Lynn now occupies Carpenter's turn in the rotation. Lynn made his second spring start on Monday and appears increasingly likely to carry that role into the season. General manager John Mozeliak acknowledged Wednesday morning that Carpenter is highly unlikely to be available by then.

Asked if recent developments have heightened his concerns over a pitcher who has experienced a series of significant medical issues before and during his nine-year term with the club, Mozeliak answered "yes and no."

"Yes, in the sense that he was still going to be able to start the season with us. I think the probability of that is unlikely," Mozeliak said.

"No, in the sense that he's had this in the past as he has been able to pitch eventually. So whether it's rest or some sort of treatment program that we've done in the past to get him back, it does not appear to be... anything surgical or we know that if we have to take that next step, he's done for the year. None of that is on the table."

Manager Mike Matheny confirmed this morning that Lohse will indeed serve as the Cardinals' Opening Day starter with Jake Westbrook set to start against the Milwaukee Brewers on April 6. Adam Wainwright is slotted to work the defending world champions' April 13 home opener against the Chicago Cubs.

Mozeliak described Carpenter's return as "precautionary" while conceding that the issue appears similar to the nerve-related condition that ended Carpenter's season in 2004 and 2008 and flared again in 2010. The 2004 incident prevented Carpenter from appeared in September, preventing him from appearing in the playoffs. In 2008, the condition forced Carpenter to abort his comeback from elbow ligament replacement surgery the previous summer. Carpenter is consulting today with the same group of specialists he visited following the '08 season. Surgery was offered -- and ultimately rejected -- as an option at that time. Mozeliak insisted this morning that surgery is not currently under consideration.

"We're optimistic, but we need the next couple days to happen," Mozeliak said.

The Cardinals, in turn, must determine who replaces Lynn as their primary righthanded set-up man for closer Jason Motte. The club currently is more inclined to go with an ad hoc arrangement based on match-ups and availability.

Carpenter, who turns 37 next month, shouldered a league-high 273 1/3 innings during the regular season and playoffs last season. Taking that workload into account, Carpenter arrived in camp committed to a modified schedule that would allow him one or two fewer exhibition starts than the remainder of the rotation.

However, two weeks from the season opener, Carpenter has yet to make a Grapefruit League appearance. Today's return to St. Louis, where he will be examined by specialists, represents further complication to a program that no longer appears to offer him sufficient time to meet the season.

Neck discomfort began plaguing Carpenter about three weeks ago. The Cardinals publicly voiced relief when the 2005 NL Cy Young Award winner was diagnosed with a bulging disc rather than a nerve issue.

Carpenter resumed a throwing program following a 13-day shutdown last week and appeared to work without discomfort during Sunday's session against hitters. Carpenter threw two 20-pitch "innings" during the session and impressed all onlookers. However, as the Cardinals headed north to play the Atlanta Braves and Astros on a two-day trip, Carpenter felt renewed pain while trying to toss on Monday.

Mozeliak and Matheny voiced full confidence Carpenter hadn't been pushed in his return.

"Our medical staff is not going to put him on the field if it thought it was going to put him in harm's way," Mozeliak said. "He showed all the strength he needed. Anybody who watched him throw realized he looked fine."

Matheny has yet to offer his rotation for the season, though many within the clubhouse are under the assumption Lohse will make his second Opening Day appearance for the Redbirds. Lohse became de facto Opening Day starter in 2008 after Adam Wainwright's appearance was rained out after four innings against the Colorado Rockies.

Lohse, Waino will do the honors

Submit Cards and MLB questions for the P-D baseball writer in Jupiter, Fla.

Matheny says Waino’s selection reflected a “reward to him (and) our fan base.'

The Houston Astros are still near and dear to Cardinals slugger Lance Berkman.

Cards Talk: Sound off about Carpenter and the rotation

Cardinals pitcher Chris Carpenter has proved the skeptics wrong before by returning from injuries and returning to form. Can he do it again? (Photo by Chris Lee, clee@post-dispatch.com)