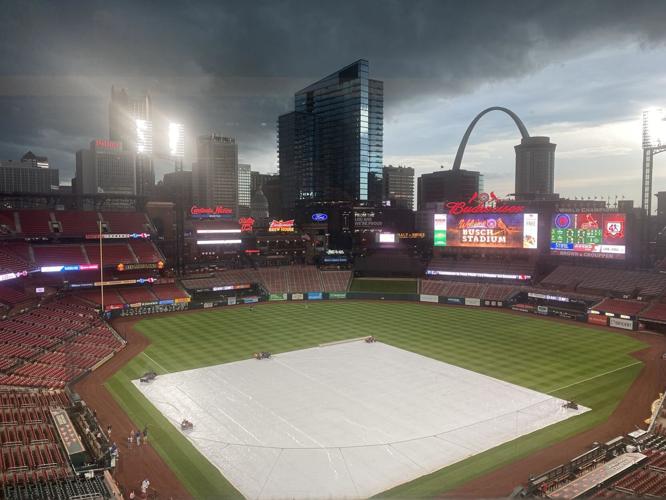 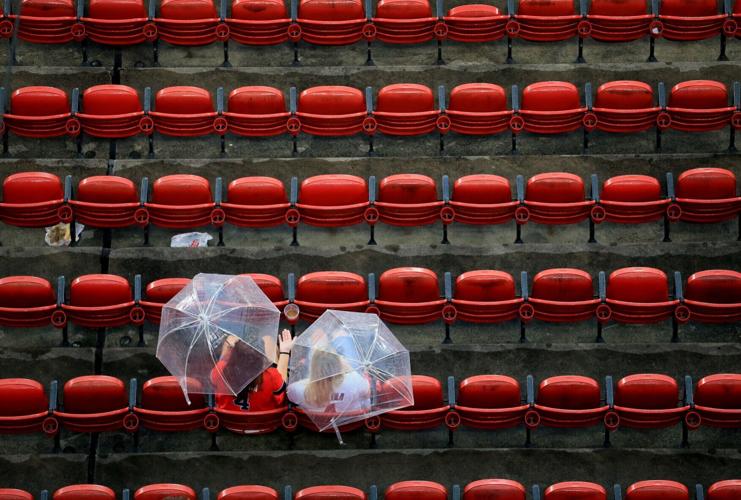 Cardinals fans take shelter under umbrellas as they wait in their seats during a rain delay at Busch Stadium in St. Louis. The scheduled game, against the Cubs, was postponed to Thursday.

The Cardinals will play the rain-delayed Wednesday game as a matinee 18 hours after the original start time. The second game of the doubleheader is scheduled start at 6:45 p.m.

The Cardinals have overhauled the lineup compared to the one posted for last night's game.

One notable change: Andrew Knizner will be taking over behind the plate in place of Yadier Molina. Many teams use both catchers in a doubleheader to lessen the physical toll on the player.

The move takes advantage of Knizner's play when paired with today's starter Miles Mikolas. It is also Molina's preference to catch the new guy, Jose Quintana, who will be making his first start as a Cardinal in game two.

Mikolas and Knizner have found a groove as battery mates this season.

In 14 starts and 90+ innings total, Knizner has helped Mikolas achieve the lowest opponent batting average of any Cardinals pitcher this season. He also pitches for a better walk/strikeout rate when throwing to Knizner.

Marcus Stroman will be the starter for the Cubs instead of pitching the evening game as originally scheduled. Justin Steele was scheduled to pitch yesterday, but the Cubs moved him to their weekend series against the Miami Marlins.

The switch means the Cardinals won't see a left-handed pitcher; the team has beat up left-handers regularly this season. It also means  Albert Pujols is no longer in the lineup; Nolan Arenado will take over at the DH spot in his stead. Nolan Gorman will get the start at second base and Brendan Donovan is in at third for Arenado.

The only remaining similarities between Wednesday's lineup and the rescheduled lineup are Paul Goldschmidt batting third and playing first base and Dylan Carlson leading off and playing center field.

Due to the doubleheader, the Cardinals and Cubs have agreed to add a 27th man to their active rosters. James Naile is now on the Cardinals roster and will be available out of the bullpen today.

RHP Miles Mikolas (7-8, 2.87 ERA): Pitching for the first time on home soil since June 16, Mikolas has been significantly better at home this season, allowing hitters to only hit .142 when pitching at Busch Stadium. Mikolas is 4-2 when starting a home as well.

RHP Marcus Stroman (3-5, 3.99 ERA): The WBC star has been on a tear in his last four starts. Allowing just two runs since returning off the IL in early July, Stroman has also gone six innings in each of his last two starts. Earlier this week Stroman announced he would be pitching for Team Puerto Rico at the World Baseball Classic in March, a change of teams after winning the tournament in 2017 with Team USA.

Thursday vs. the Chicago Cubs: Jose Quintana (first start as a Cardinal) vs. Marcus Stroman (3-5, 3.99 ERA)

Check back here throughout the evening for immediate coverage of the game and any news that surfaces from the Cardinals' pre-game activities. We will publish expanded game coverage online Wednesday night, and also in the pages of Thursday's Post-Dispatch.

After a night to forget in the series opener, the Cardinals look to bounce back in a battle of the southpaws.

The Cardinals look to do something they have never done in their storied history in their Sunday matinee, sweep the New York Yankees .

Jordan Montgomery makes his Cardinals debut as St. Louis looks to swipe a series win from the Bronx Bombers for the first time since 2005.

In an afternoon getaway day matchup, the St. Louis Cardinals look to leave the high altitude of Colorado with their fourth straight series victory.

The Cardinals and the Colorado Rockies meet for the first time this season at the mile high ball park.

The Cardinals host their historic American League equivalent, looking for their first win against the New York Yankees since 2014.

Cardinals fans take shelter under umbrellas as they wait in their seats during a rain delay at Busch Stadium in St. Louis. The scheduled game, against the Cubs, was postponed to Thursday.