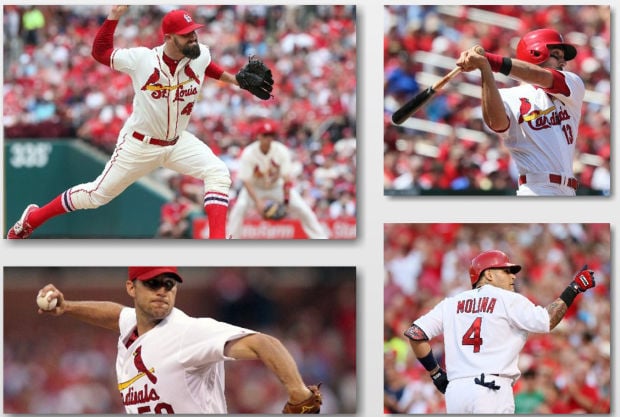 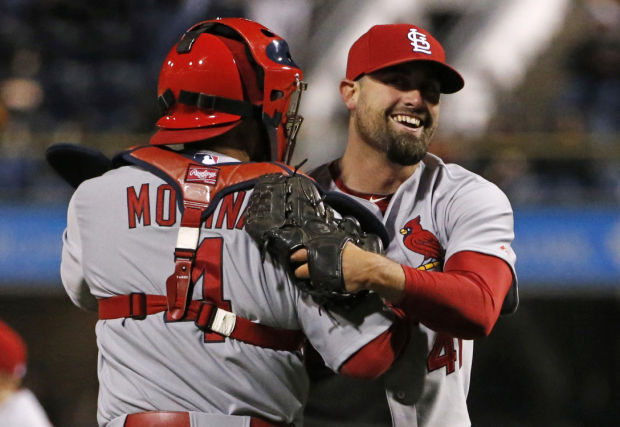 St. Louis Cardinals relief pitcher Pat Neshek, right, celebrates with catcher Yadier Molina (4) after getting the final out in the ninth inning of a baseball game against the Pittsburgh Pirates in Pittsburgh on Saturday, April 5, 2014. The Cardinals won 6-1. (AP Photo/Gene J.Puskar)

ST. LOUIS • When Cardinals manager Mike Matheny gathered his team for a meeting shortly before first pitch Sunday so that he could announce and congratulate the players selected to the All-Star Game, he saved the surprise for last.

Yadier Molina was the fan's selection.

Adam Wainwright was selected by his peers.

Matt Carpenter will go as a manager's choice.

Pat Neshek will be going home.

The Cardinals put four players on the National League roster for the 2014 All-Star Game, which will take place later this month at Target Field in Minneapolis. Signed to a minor-league contract in February, put on the opening-day roster in April, and moved into a setup role in May, Neshek will return to his hometown Twin Cities as a first-time All-Star. Matheny, who will skipper the NL team as the manager of the reigning pennant-winner, selected Neshek to be in the bullpen. The full roster was announced Sunday evening.

“It was great to get the opportunity to come in and pitch those big innings. I think it starts there,” said Neshek. “I had success a little bit like this early in my career with the Twins. I thought it was still in there, but you never know. It's crazy to see what it blossomed into. I thought there was a chance. Baseball doesn't really make a spot for setup guys. I knew the reality.”

For Molina, the NL leader in votes a year ago, this will be his sixth consecutive All-Star Game appearance. It is the fourth time in his career that the fans have elected him to the NL's starting lineup.

Wainwright has been elected twice before, including last year when he chose not to skip his final start of the first half and went to the All-Star game without appearing in the game. Carpenter will be appearing on his second consecutive All-Star roster in two years as a regular.

The fan election of Molina and player selection of Wainwright gives Matheny the chance to start both players as the NL's first-pitch battery. It is something that he has wanted to do if Wainwright and Molina had the production to merit it.

“There's some thought to that,” Matheny said. “I still have time.”

Matheny explained that Carpenter's versatility was part of his selection. Asked if last year's turn as a MVP-caliber player for the NL champs also was part of the invitation, Matheny said he tried to focus mostly on what players had done so far this season and this season alone.

The midsummer celebration begins next weekend with the Futures Game at Target Field on Sunday and the home run derby on July 14, the eve of the All-Star Game. Matheny will take his entire staff to the game.

"The first one in your career will always be the most thrilling," Carpenter said. "There are so many emotions and so much excitement and it was here and gone before I was able to soak it in. This one, I think, will really be one where I can sit back and take in the moment. I can just have fun and enjoy the experience, and it will help because I know somewhat what to expect. But it still is special."

This exhibition game isn't a real competition, so there's no reason to generate real anger over All-Star selections.

Cards have obvious needs, but finding solutions and constructing deals is another story.

Marlins win the series at Busch, knocking Cards back to third place in the NL Central.

Cards Podcast: Goold & Miklasz on the Garcia controversy and more

On the new episode: How deep is Matheny's commitment? What does it mean for Craig, Holliday and Adams?

Garcia's season will end with surgery

Cards starter is dealing with nerve issues stemming from his left shoulder. Club is irritated by how he notified them.

Cardinals turn to Taveras for offense

22-year-old's at-bats can only come from not playing one of the starters the Cards have banked on for the first half of the season.

The Marlins smacked 16 hits and scored seven runs against the Cardinal bullpen, all while starter Henderson Alvarez kept the offense in silent…

Six Athletics were named to the Midsummer Classic for the first time since 1975, while the NL-leading Brewers send four All-Stars to Minneapol…

Marlins 8, Cardinals 4 - The St. Louis bats came alive late but it wasn't enough as the Cardinals dropped their series finale to the Marlins.…

Goold: What the week means for Cards

St. Louis Cardinals relief pitcher Pat Neshek, right, celebrates with catcher Yadier Molina (4) after getting the final out in the ninth inning of a baseball game against the Pittsburgh Pirates in Pittsburgh on Saturday, April 5, 2014. The Cardinals won 6-1. (AP Photo/Gene J.Puskar)