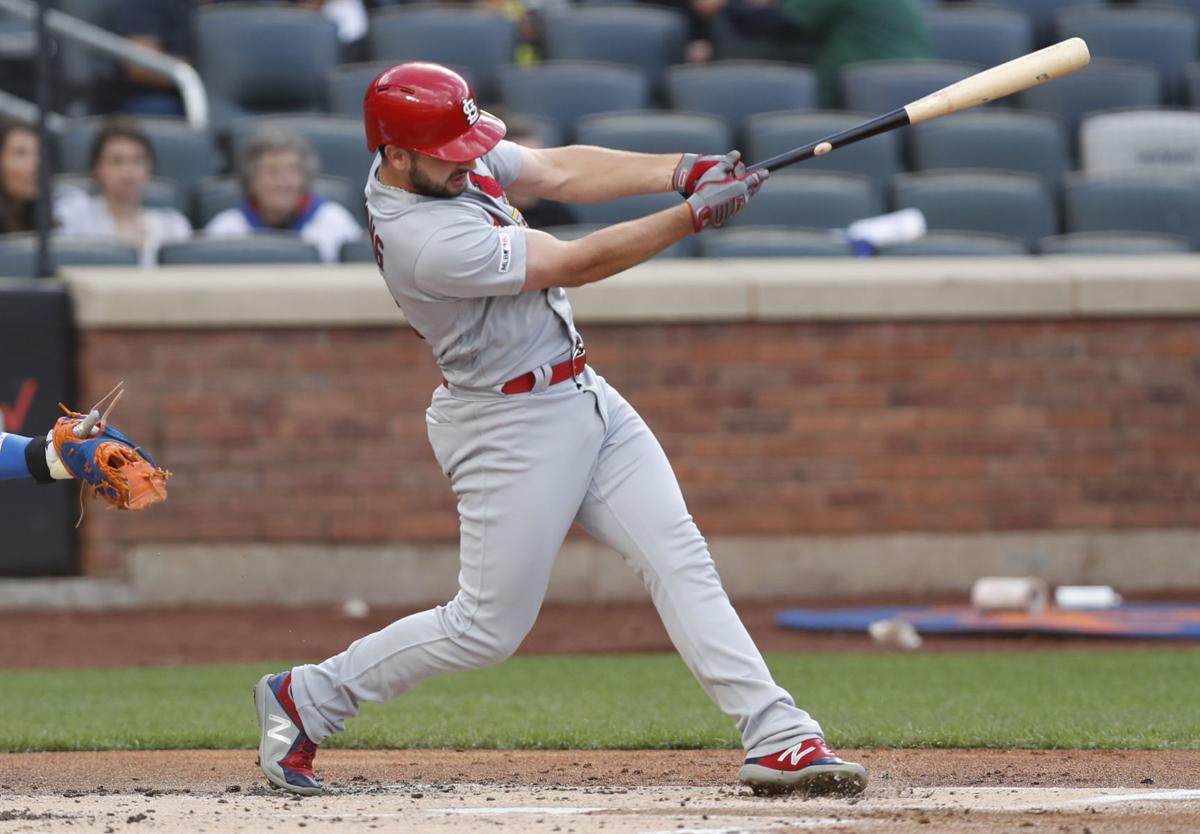 St. Louis Cardinals' Paul DeJong hits a 10th-inning RBI single against the New York Mets that broke a 4-4 tie in the continuation of a rain-suspended game Friday, June 14, 2019, in New York. The Cardinals won 5-4. (AP Photo) 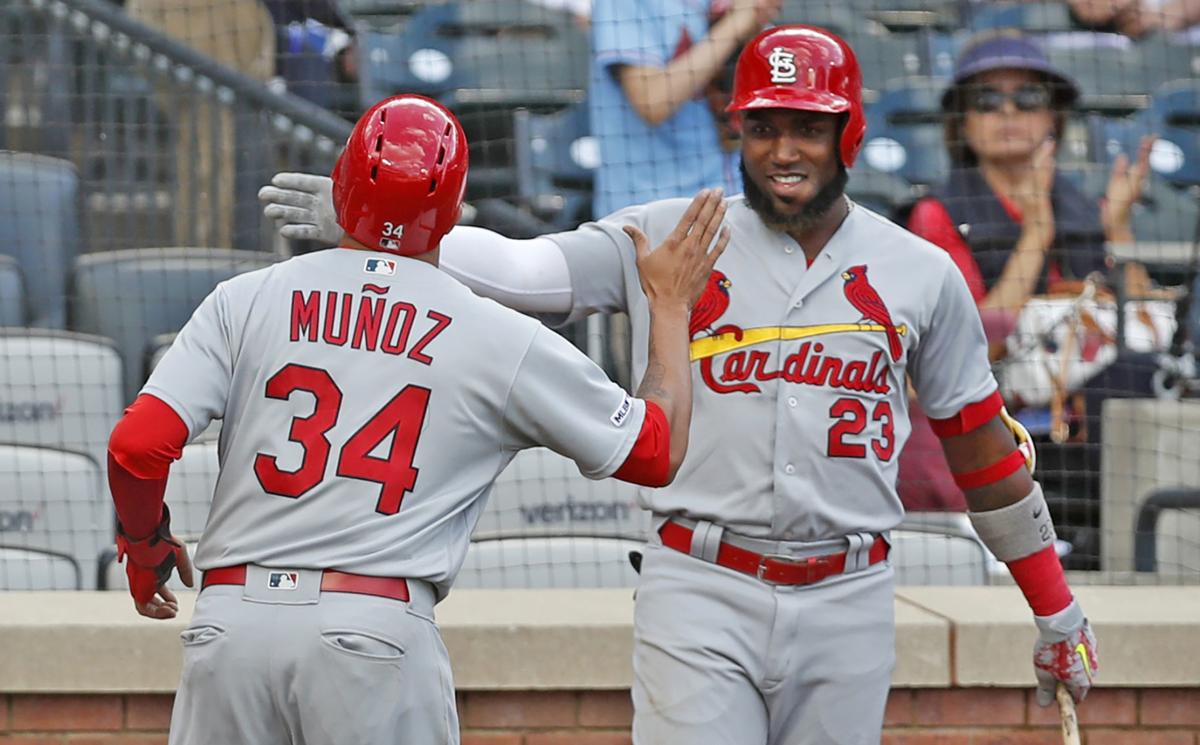 St. Louis Cardinals' on-deck batter Marcell Ozuna celebrates with Yairo Munoz, who scored on Paul DeJong's single during the 10th inning of the continuation of a rain-suspended game against the New York Mets on Friday. The Cardinals won 5-4. (AP Photo)

NEW YORK — It didn't take as long as Thursday's game to win, but the Cardinals, for the second time in an evening in Queens, used a late-game rally to dispatch the New York Mets.

Three home runs in the Cardinals' final two at-bats vaulted them to a 9-5 victory Friday night at Citi Field and completed a non-traditional two-game sweep of the day against the Mets. Earlier in the evening, the Cardinals and won, 5-4, a game suspended from the previous night.

A few hours after he had the RBI single to win the first game, Paul DeJong hit a solo home run in the eighth to tie the game.

Dexter Fowler followed with a three-run homer that broke a 5-5 tie. Kolten Wong, a late-game replacement at second, homered in the ninth inning to extend the Cardinals lead.

The Cardinals hit four homers in the game.

Rookie Tommy Edman had started at second base and helped the Cardinals tie the game early, take their first lead of the game in the fifth, and then yielded the position to Wong for the late-game action. Edman doubled and scored in the third inning to knot the game, 1-1. He reached on a forceout in the fifth and was on base when Jose Martinez delivered a three-run, pinch-hit homer to power the Cardinals to a 4-1 lead.

It stayed that way until the seventh inning when lefty Andrew Miller failed to retire any of the batters he faced. All three would eventually score, aided by a throwing error by Wong.

That rally pushed the Mets ahead, 5-4.

It didn't survive the first batter of the eighth inning. Against former Mets closer Jheurys Familia, DeJong hit his second homre in as many days at Citi Field. With two outs, Yadier Molina doubled and Harrison Bader drew a walk to set up Fowler with a chance to push the Cardinals ahead. He did with a home run into the Cardinals' bullpen.

Daniel Ponce de Leon started the game for the Cardinals and allowed one run on two hits through four innings. He complicated his outing with four walks.

John Gant (6-0) minimized the trouble from a bases-loaded mess in the seventh inning to keep the game within in reach. He pitched three scoreless innings in relief.

The prediction in the clubhouse as the Cardinals took the field for a suspended game, starting with the bottom of the ninth inning, was that they could win the game "in 20 minutes."

Paul DeJong skipped an RBI single to left field to score Yairo Munoz and send the Cardinals to a 5-4 victory in the 10th inning of a game that had to be resumed from Thursday night. Rain had made the field inoperable during the ninth inning Thursday, and so the Cardinals' two-run rally in the top of the ninth only served to prolong the game -- all the way till Friday.

Carlos Martinez pitched a scoreless bottom of the ninth to setup the rally that began with pinch-hitter Munoz's single.

Munoz stole second, reached third on Matt Carpenter's groundout, and then scored what proved to be the winner on DeJong's single. The RBI was DeJong's first of the day but second of the game. He had homered almost 24 hours earlier off the Mets' starter, Jacob deGrom.

He noted that the crowd wasn't yet into the game because there were no lineup announcements, no anthem, nothing before the game.

"We brought the energy," DeJong said.

Jordan Hicks secured his 14th save of the season with a perfect 10th inning. Martinez got the win. There's the possibility that either reliever could be available if needed for the originally scheduled game at Citi Field. Martinez is more likely to be used than Hicks, but Shildt said that he wouldn't rule out using either righthander in the full-length nightcap if needed.

The lineup for the second game:

Cardinals bring back Leone for a one-night engagement, but first there's a game

We interrupt you're regularly scheduled program to bring you news of the Cardinals promoting reliever Dominic Leone for Friday evening's game at Citi Field against the the New York Mets. Leone will be the Cardinals' 26th man for the game -- an allowance the Cardinals and Mets have both been afforded because they must complete Thursday's game before starting Friday's game.

We now return you to your irregularly scheduled Cardinals game.

When last we saw the Local Nine, they had scored two runs in the top of the ninth inning and turned the Mets' eagerness to play in the rain into a 4-4 game and a mess for the infield. The game could not continue as the weather and field conditions worsened, leaving the Cardinals to leave the ballpark a tie game that had to be finished early Friday.

Carlos Martinez has been announced as the pitcher, so he's expected to throw the first pitch of the bottom of the ninth. A run by the Mets in that inning and the game is over.

The Friday game will start about 30 minutes after the end of the Thursday game, give or take a few minutes if there are extra innings.

This story will be updated throughout the evening.

Play at the plate halts Cardinals' comeback in the ninth, preserves Mets' 8-7 victory

NEW YORK — Running wild and unchecked inning after inning, the Cardinals had no trouble stealing second Saturday against the Mets and getting …

After Mets argue to play through the rain, Cardinals rally to tie before game is suspended

NEW YORK – With the rain intensifying, pools of water forming near first base, and the tarp unrolled in left field, a group of Mets players ar…

NEW YORK — As they entered spring training, the Cardinals trumpeted the quantity of pitching options they had available for the major-league s…

Cardinals' No. 2 pick signs for $1.5 million bonus and goes right to work

The latest dent to the Cardinals' pitching staff came Wednesday in Miami when righthander Ryan Helsley had to leave the game with shoulder pain.

Quick Hits: Can Cards overhaul their roster? Who are potential trade chips? Would DeWitt fire Mo?

Check out these and other hot topics from Derrick Goold's chat with an impatient fan base, including: Another season, another playoff miss? Pi…

St. Louis Cardinals' Paul DeJong hits a 10th-inning RBI single against the New York Mets that broke a 4-4 tie in the continuation of a rain-suspended game Friday, June 14, 2019, in New York. The Cardinals won 5-4. (AP Photo)

St. Louis Cardinals' on-deck batter Marcell Ozuna celebrates with Yairo Munoz, who scored on Paul DeJong's single during the 10th inning of the continuation of a rain-suspended game against the New York Mets on Friday. The Cardinals won 5-4. (AP Photo)