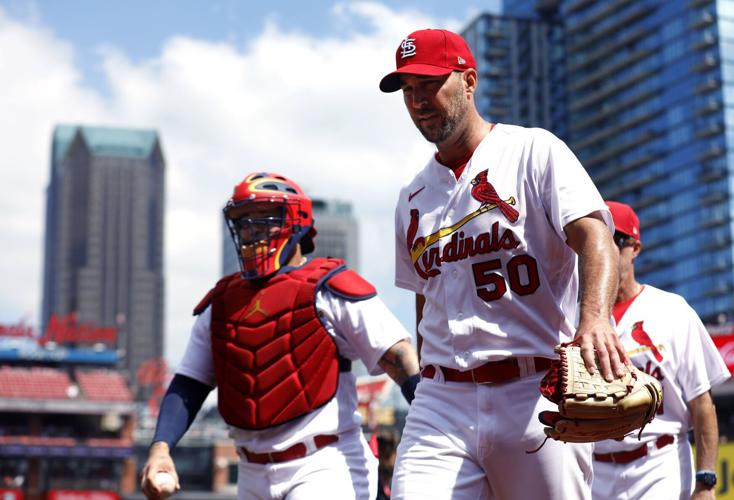 Cardinals starting pitcher Adam Wainwright, center, and catcher Yadier Molina, left, take the field as battery mates on Thursday, Sept. 8, 2022, at Busch Stadium. It was their 324th appearance together, tying Mickey Lolich and Bill Freehan for the most such starts in big-league history. 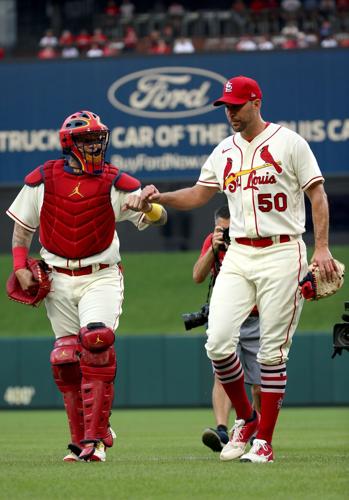 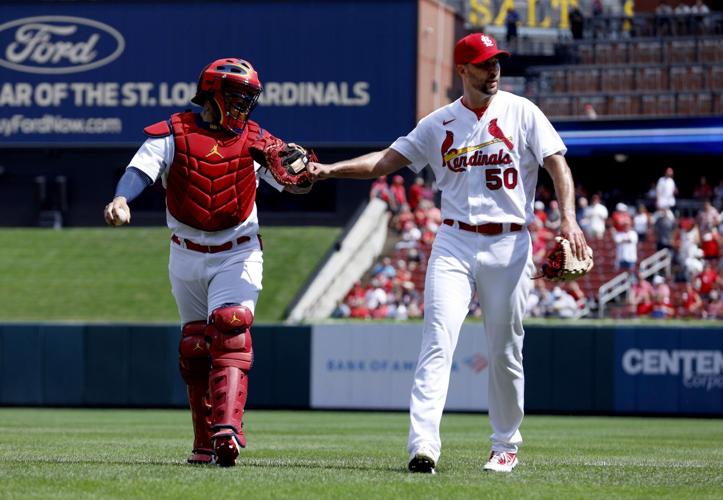 St. Louis Cardinals starting pitcher Adam Wainwright (50) and catcher Yadier Molina (4) take the field as battery mates for the 324th time — tying Mickey Lolich and Bill Freehan for the most starts in Major League history — before a baseball game against the Washington Nationals, on Thursday, Sept. 8, 2022, at Busch Stadium.

Pitcher Mickey Lolich and catcher Bill Freehan set high standards for enduring success during their time together as Detroit Tigers.

So it’s only right that Adam Wainwright and Yadier Molina will be the ones breaking their record of 324 career starts as major league batterymates Wednesday night.

These two Cardinals mainstays have persevered in the 2000s with the same old-fashioned work ethic Lolich and Freehan demonstrated in the 1960s and ’70s.

Those yesteryear Tigers played before free agency scattered star players into a big-money marketplace. Their record stood for 47 years.

It’s hard to imagine anybody topping the new mark Wainwright and Molina are setting together.

How many high-end pitchers and catchers will keep pushing their physical limitations? And how often will an elite tandem spend so much time playing together?

Lolich won 217 games, worked 3,638⅓ innings and struck out 2,832 batters in a much different era of our national pastime. Four-man rotations were the norm, and he pitched 192 or more innings for 13 consecutive seasons. He earned three All-Star Game invitations and second- and third-place finishes in Cy Young Award voting.

Then Lolich pitched 300-plus innings during his next four seasons too. He made a point of not asking out of games. He noted that he got more sink on his pitches when he became fatigued.

During his 16-year career — which he capped with two leisurely seasons as a San Diego Padres reliever — Lolich never required surgical repairs. Nor was he a human pin cushion like teammate Denny McLain, who relied heavily on cortisone shots and painkillers during his 31-6 season in 1968.

Lolich’s secret for staying fresh? Scalding hot water on his shoulder after the game instead of the traditional ice.

While Wainwright is an exceptional athlete who could excel in many sports, Lolich was a portly left-hander blessed with an easy pitching motion and a famously bad bat.

Both players displayed self-effacing humor, but both were intense competitors on the mound. And while Molina and Freehan came from dissimilar backgrounds, each emerged as commanding leaders.

Like Wainwright and Molina, Lolich and Freehan clicked with excellent on-field chemistry.

“We started out as rookies and developed the same mind,” Lolich recalled after Freehan died in 2021 after a long struggle with dementia. “I basically called my own game, and after a while, Bill was right with me. He knew what I wanted to throw, and I rarely had to shake off his sign. We became one mind working together.”

Freehan was an 11-time All-Star. He won the Gold Glove in five consecutive seasons. In 1968, he caught 155 games, hit 25 homers, drove in 84 runs and finished second in the MVP voting.

He spent his whole career with the Tigers and caught 110 or more games in 12 straight years. He set major-league career catching records for fielding chances (10,714), putouts (9,941) and fielding average (.993) that were later broken.

Freehan was all business. When he wrote a book, “Behind the Mask,” those of us who read the scandalous “Ball Four” growing up in the Motor City were hoping for R-rated anecdotes about our beloved Tigers. Predictably, the book mostly stuck to mundane baseball stuff.

Wainwright earned $19.5 million in base salary at his peak, and Molina reached the $20 million level on his last multiyear deal. Needless to say, there was no such money in baseball in the 1960s and ’70s before Curt Flood took on the reserve clause.

Lolich signed for $30,000 coming out of high school in Portland, Oregon. After his heroic performance in the 1968 World Series, he recalled getting a $10,000 raise to $40,000. He won a Dodge Charger as Series MVP and got one local endorsement deal, for the then-local Little Caesars pizza chain.

When he retired, he bought a donut shop. He did some of the daytime baking and worked the front counter himself for 18 years.

As a teenager, Freehan played against several future members of the Tigers in summer leagues in the Detroit area. He starred in baseball and football at the University of Michigan and got a $100,000 bonus to sign with his hometown team.

But like Lolich and the rest of the Tigers, he remained tethered to the real world. After retiring from baseball, Freehan built a manufacturer’s representative agency and took a break from that business to coach the University of Michigan baseball team for six years.

“We never made the big salaries,” Freehan said after his retirement from baseball. “Most of us did better financially after baseball. Detroit has been good to us. We made our homes here, stayed loyal to the community. That’s the way it should be.”

That was a different time for baseball but a very good time. So it’s only right that ballplayers’ ballplayers like Wainwright and Molina would be the ones finally breaking their record.

Baseballs with individual and invisible markings will be introduced for every pitch Cardinals designated hitter sees after he hits No. 699, official says.

Cardinals starting pitcher Adam Wainwright, center, and catcher Yadier Molina, left, take the field as battery mates on Thursday, Sept. 8, 2022, at Busch Stadium. It was their 324th appearance together, tying Mickey Lolich and Bill Freehan for the most such starts in big-league history.

St. Louis Cardinals starting pitcher Adam Wainwright (50) and catcher Yadier Molina (4) take the field as battery mates for the 324th time — tying Mickey Lolich and Bill Freehan for the most starts in Major League history — before a baseball game against the Washington Nationals, on Thursday, Sept. 8, 2022, at Busch Stadium.