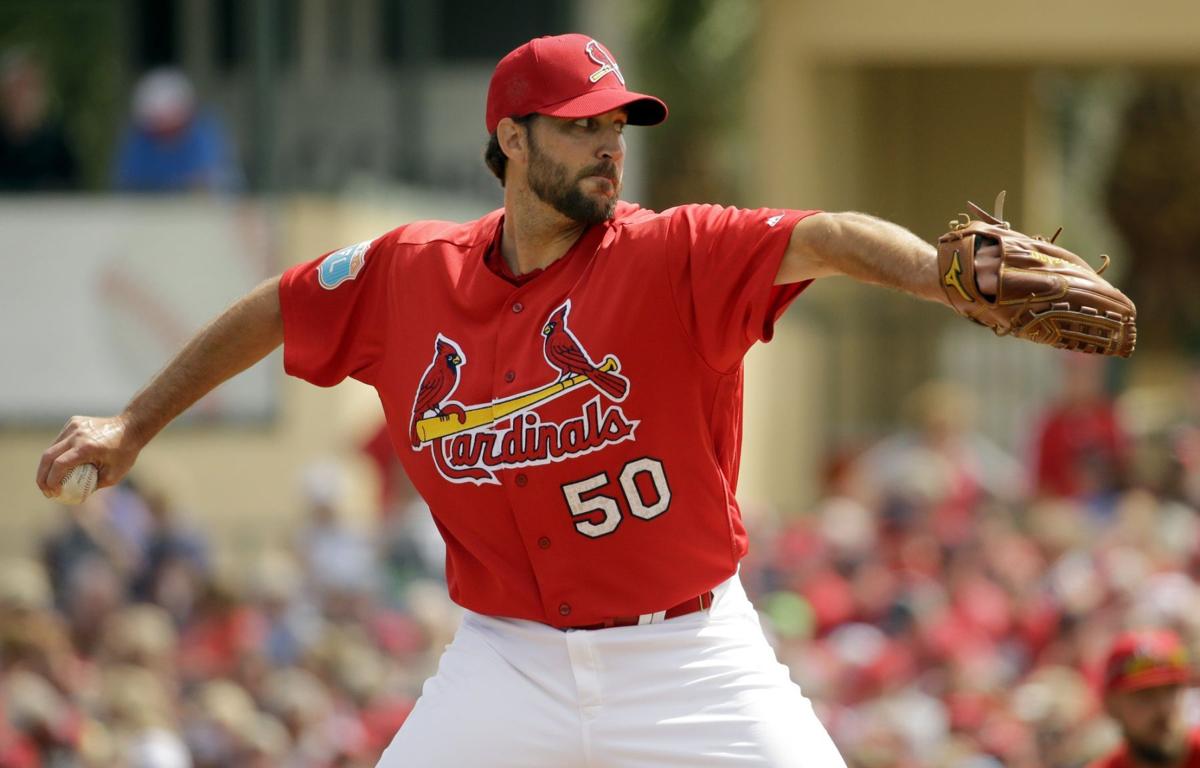 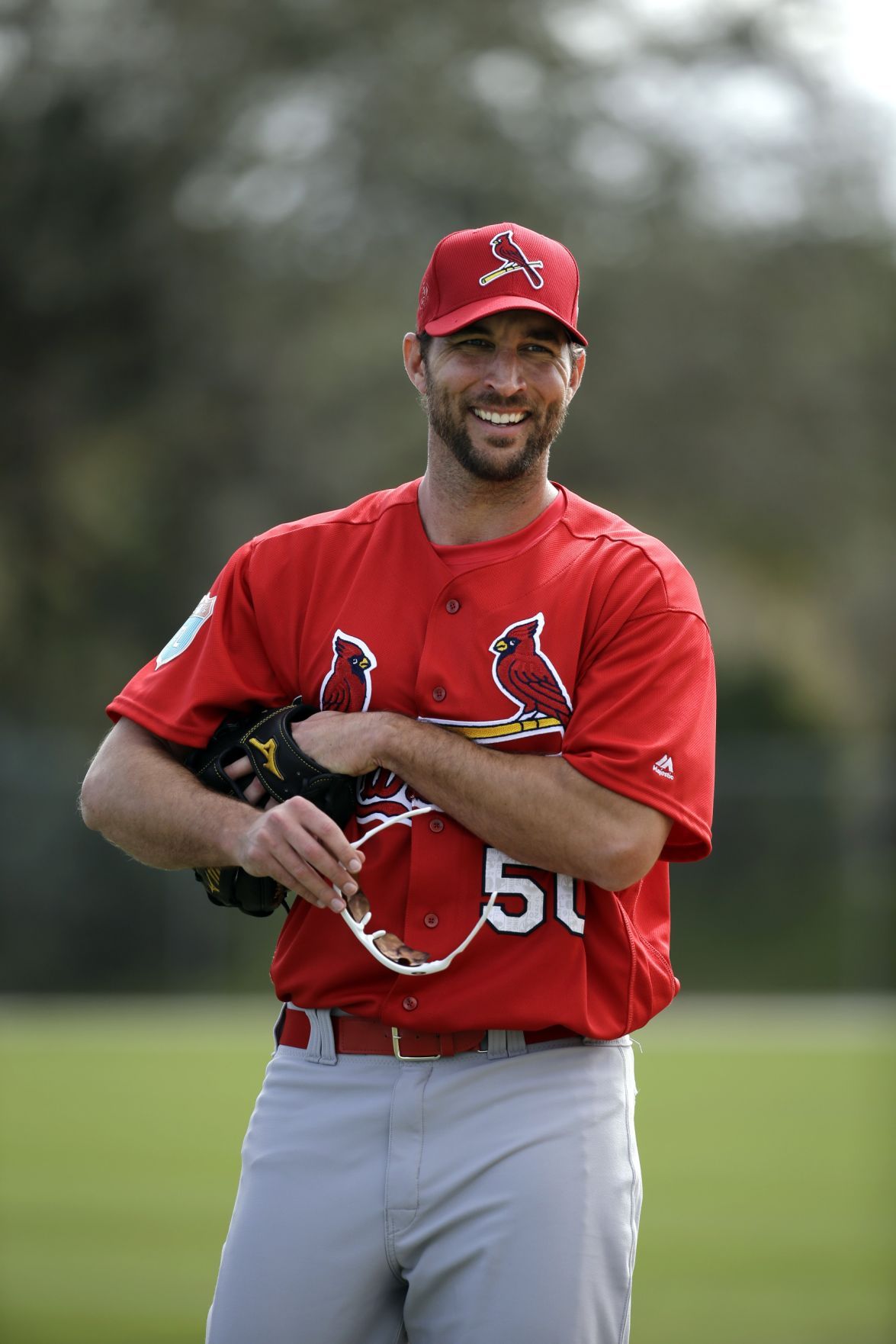 JUPITER, Fla. • As far as walk-off wins go, this one wasn't the dramatic long ball that led to a mosh pit at home plate or even the clutch single that could have yielded a hearty fist pump around first base.

This was an error on a groundball.

The Cardinals completed a sweep of the split-squad series by scoring the winning run on a throwing error at Roger Dean Stadium. Houston's catcher attempted to make a throw to first on a groundball, and the throw was errant enough for the winning run to score in a 4-3 victory Saturday afternoon. The power show up in Port St. Lucie, Fla., ended with the Cardinals' winning 14-9.

Tommy Pham tied the game at RDS with a ninth-inning homer, and then the Cardinals continued to load the bases. David Washington drew a one-out walk to load the bases and allow for the error to push home a run. Prospect Harrison Bader hit the groundball that led to such shenanigans on the Astros' time and allowed the Cardinals to complete a comeback to win.

More from this game below including Adam Wainwright's start and Trevor Rosenthal's scoreless inning.

Pham knots game with a homer

A few days ago Cardinals outfielder Tommy Pham suggested that his day would be a lot better if he could "find a way to hit a homer."

Pham homered in the bottom of the ninth inning to tie the Houston Astros, 3-3, at Roger Dean Stadium. The home run was his first of spring training, and it gave him at least a hit in four consecutive starts. The Astros had held the Cardinals without a hit for half of the game.

Back in the clubhouse, Adam Wainwright spoke about his four-inning outing.

"The important thing for me today was doing a better job executing," Wainwright said. "So I backed off a hair in several different ways and tried to really focus down, focus on driving the ball through the target, and did a much better job of that too. Made some good pitches. I still made a couple mistakes but overall I was efficient, most of the time ahead in the count, most of the time throwing the ball exactly where I wanted to."

Wainwright identified a few off-beats in his mechanics from his previous start. One of those was drifting a bit from his target instead of maintaining a direct line to the plate.

After a bout with some stiffness in his right arm, Seth Maness through a bullpen Saturday and expects to be available to pitch in a game as soon as Monday. The Cardinals’ fireman reliever made two Grapefruit League appearances and allowed a run on two hits in three innings before taking a break. Maness said he completed the side session Saturday without any soreness and called the five-day rest a “precaution.”

The Cardinals finally found some hits, but they still trail the Astros, 3-1, entering the eighth inning of Saturday's split-squad game at Roger Dean Stadium.

Cards reliever Jonathan Broxton surrendered a two-out RBI single to pinch-hitter Tyler White in the top of the seventh. The Cards responded by stranding two men. Tommy Pham's single was just the second hit of the day.

There are fireworks in Port St. Lucie, but a crowd of 6,843 at Jupiter's Rodger Dean Stadium watched the Cardinals go without a hit until the bottom of the sixth.

Aledmys Diaz doubled on a ground ball to left, scoring Eric Fryer, who led off and reached on a botched ground ball by Astros' second baseman Tony Kemp.

Cardinals closer Trevor Rosenthal handled the top of the sixth. Luis Valbuena promptly smashed the first pitch he saw for a ground-rule double that bounced over the fence in left-center.

Rosenthal recovered to strike out the next two batters. He got a groundout from the third. He threw 12 pitches total. Six were off-speed pitches. He hit 98 miles per hour twice.

Cardinals still looking for a hit as Wainwright exits

Houston Astros second baseman Danny Worth had no trouble turning on pitches from Adam Wainwright and it was that ability that tilted the first four innings of this afternoon's game at Roger Dean Stadium.

That, and the Cardinals inability to turn on anything.

Both of Houston's runs came off Wainwright.

Wainwright allowed four hits and the two runs through four innings of work. He threw 52 pitches, 33 of which were strikes and two of which were tagged by Worth.

Worth homered in the second inning for the Astros' first run.

In the fourth inning, Worth put a line drive off the left-field wall that momentarily threatened to break the game open for Houston. Wainwright resisted and was able to escape the inning with one run in and two runners left on base.

Neshek struck out Matt Carpenter and Matt Holliday in his inning.

If there was a moment in the first inning Saturday against Houston that showed Adam Wainwright was back to full speed it came at first base and it had little to do with a pitch he threw.

For the final out of a scoreless first inning, Wainwright scampered over to cover first base, receive the toss from Matt Adams, and tag the bag for an out.

It was a simple PFP* moment for a two-time Gold Glover.

It was also something he couldn't do seven months ago.

Wainwright has had no limitations coming back from a ruptured Achilles' tendon, an injury that erased most of his 2015 season. The righthander has had to wear a support for his right knee at times this spring due to a hyperextension that happened years ago at Citi Field. Otherwise, he has been able to run and jump and field and win bunting contests without concern. He has been able to cover first like usual.

After a first spring training outing that saw more walks than normal and some flighty control, Wainwright fell behind to the first batter he faced Saturday. He raw a 3-1 count against the Astros' leadoff hitter and then allowed a single to left field. It took one pitch to negate that issue. Colin Moran offered at Wainwright's first pitch to him and grounded into the routine 4-6-3 double play, with Aledmys Diaz handling the pivot. The next batter grounded out to first base, with help covering from Wainwright.

On consecutive outs he was able to go in to his right and back to his left.

The third batter of the inning, Danny Worth, sent one pitch over the wall to give Houston a 1-0 lead through two innings. Wainwright recovered quickly for a scoreless third inning.

The only given when it comes to a split-squad game these days around the Cardinals is that the veteran pitcher stays home and the manager goes on the road.

The team buses pulled away this morning carrying manager Mike Matheny and some power north to Port St. Lucie, Fla., to face the Mets. Left behind was Adam Wainwright and closer Trevor Rosenthal to pitch against the Houston Astros.

While not starting the game against the Mets, lefty Tim Cooney will join the flow of starters for the first time this spring training. Cooney had to slide off the normal schedule to address some soreness/weakness in his left arm. He's been in a throwing program over the past two weeks that essentially restarted his schedule. He still has time to build up arm strength to be a starter at Class AAA Memphis when camp breaks at the end of this month.

Lyons is starting, though he continues to be auditioning for a relief role in the majors. The Cardinals will keep him starting for a stretch here as they make sure the other starters in the rotation are healthy and don't need an understudy.

Here's the lineup that will back Lyons in PSL:

Back here in Jupiter, Wainwright will make his second start of spring training and push toward and possibly through four innings of work. While the younger/newer starters headed north for the day, the veteran varsity players stayed behind. Matt Holliday is in the lineup, but as DH, yielding first base to Matt Adams for the day.

Here's the lineup behind Wainwright at home:

The Post-Dispatch will have writers at both games and dueling game blogs going all afternoon here at StlToday.com. This will be the place for the coverage of the home game against the Astros. Rick Hummel is journeying to PSL to cover the game for StlToday.com from the Tradition Field press box. He'll have another live blog humming by first pitch.

We have a milkshake bet on which blog gets more traffic.

Piscotty hit in left elbow, but it's not serious

Outfielder's elbow is swollen but he has good movement. Cards hit four homers to mash Mets 14-9.

Martinez is back to work for Cardinals

He pitches for the first time since his shoulder acted up.

Best Podcast In Baseball: Goold and Hummel on shortstops, Holliday at 1B

Listen in as Post-Dispatch baseball writers Derrick Goold and Rick Hummel discuss the state of the Cardinals.

Quick Hits: Goold on the Cardinals

What's in a name? Not a first initial with Cardinals

With four Garcias in camp and sometimes three in the lineup, there isn't a "J." or "G.", "A." or "S." to distinguish them. Numbers are enough.

Watch: Leake strikes out six vs. the Twins