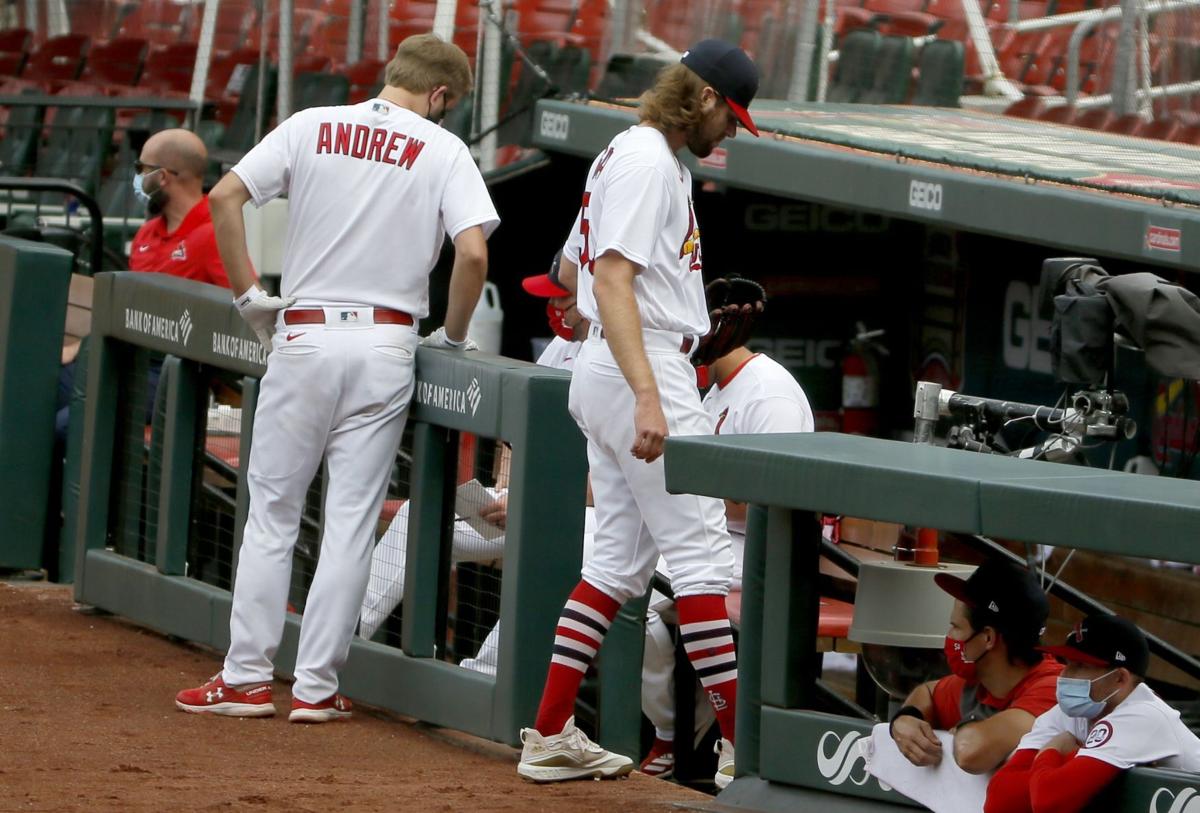 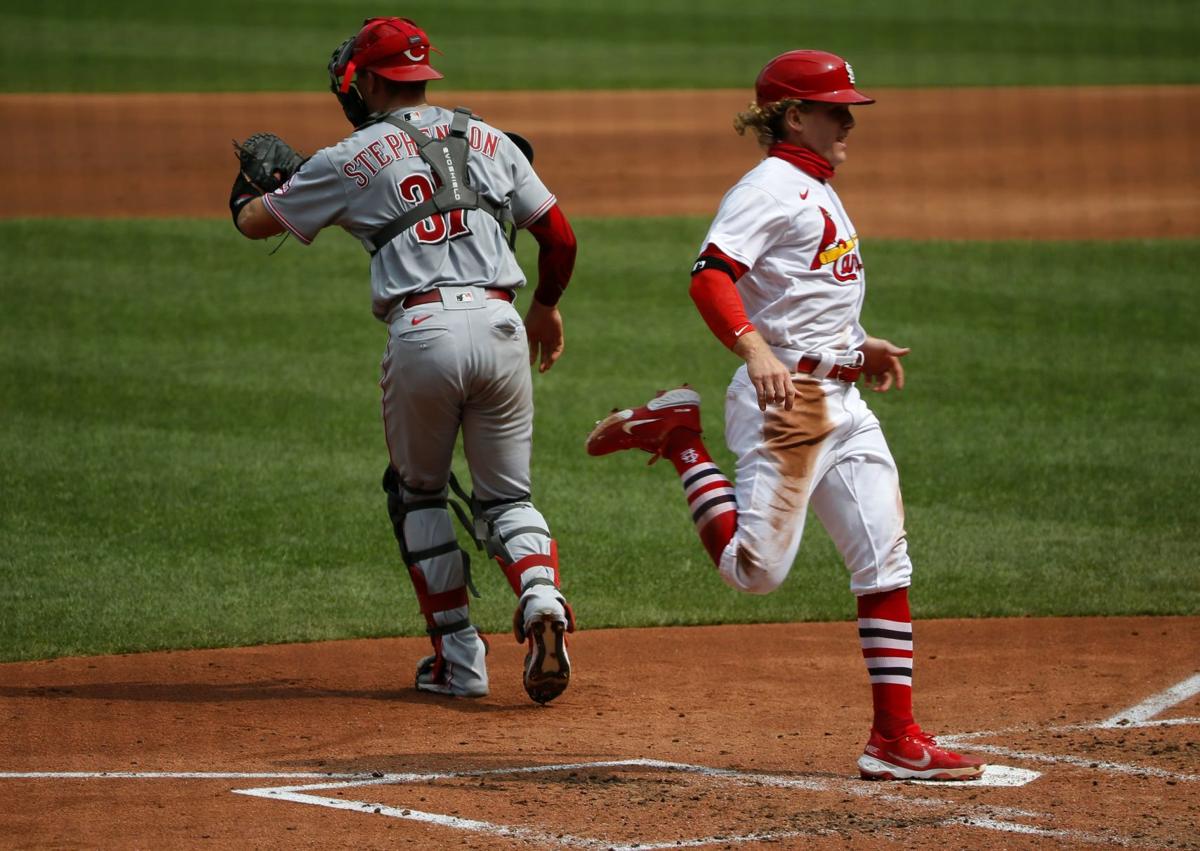 Cardinals outfielder Harrison Bader scores in the 2nd inning on Sunday, Sept. 13, 2020, of a game against the Cincinnati Reds at Busch Stadium in St. Louis, Mo. Photo by Christian Gooden, cgooden@post-dispatch.com

The question coming out of Sunday's misspent afternoon at Busch Stadium isn't about how costly the 10-5 loss was to Cincinnati Reds for the Cardinals.

It's how many games it could cost in the new future.

For the third time in their previous five games, the Cardinals had to remove a reliever in the midst of an injury due to a physical ailment. Throw in the fact that the Cardinals had to call on Genesis Cabrera and Alex Reyes to handle middle innings, and the Cardinals could go into Monday's doubleheader at Miller Park without four key relievers: that duo and John Gant (groin) and Giovanny Gallegos (groin).

Gant was lifted in the middle of the seventh inning after facing one batter because of a sore right groin. The team described Gant as day to day, though he will be examined for the severity of the injury before the team leaves for Milwaukee on Sunday night.

After Gant left, the game went sideways on the Cardinals.

Andrew Miller walked in a run, and he allowed another run on a wild pitch. The Cardinals bullpen allowed seven runs total, seeing a 3-3 slog of a game come part as the Reds scored seven runs in the final four innings. Six of the seven runs came after Gant left the game.

The Cardinals have two bullpen decisions to make before the doubleheader Monday at Miller Park, and outfielder Austin Dean was also injured during the game. Dean left the game with a flexor tendon irritation on his throwing arm. In the game, he lost a fly ball in the sun that led to two runs for the Reds, and he had some awkward swings during a strikeout immediately before leaving the game with the injury.

The Cardinals have Dylan Carlson available if the move is made due to an injury, and they have advertised that Justin Williams is scheduled to be on the taxi squad at some point during the series.

The Reds took the series, their first series win vs. Cardinals this year.

The go ahead run scored on a bases-loaded walk, and the insurance run trotted home on a wild pitch, and still the costliest moment in the seventh inning for the Cardinals had nothing to do with losing a lead.

It had to do with losing a pitcher at a precarious time for the bullpen.

The Cardinals misplaced their one-run lead in the top of the seventh and go into the bottom of the inning trailing, 7-5, to Cincinnati at Busch Stadium. Andrew Miller gave the Reds a bases-loaded walk and another run on a wild pitch in an inning he was not supposed to handle.

But he had to when John Gant abruptly left.

Gant faced one hitter, allowed a single, and then was lifted from the game with an apparent injury. The exact nature of his ailment is not yet know, but this blog will be updated as soon as the information is available.

This is the third time during the weekend that the Cardinals have had to lift a reliever in the middle of an inning due to a physical issue.

Giovanny Gallegos strained his groin while trying to secure a save that was blown against Detroit. He went on the injured list the next day, and it is questionable whether he'll be able to pitch this season with the calendar running out. Genesis Cabrera left Saturday's game when he had his acrylic fingernail come apart on the mound during his warmups. He was OK and back to pitch in Sunday's game.

All of this happens as the Cardinals ready to head to Milwaukee for a five-game, three-day visit to Miller Park. The Cardinals have three doubleheaders in the next six days and innings will be at a premium.

The Cardinals broke the aforementioned 3-3 tie (see below) in the fifth inning when Matt Carpenter and Harrison Bader had RBI singles. The bottom third of the Cardinals order has supplied three runs, four hits, and those two RBIs going into the eighth inning.

The score implies a peppier game than the pitching has provided.

The Cardinals and Reds have exchanged volleys through four innings for a 3-3 tie. In each case, the Cardinals took a lead and the Reds answered.

The host Cardinals got a 1-0 lead in the first on a sacrifice fly by right fielder Rangel Ravelo, and the Reds echoed with a solo homer by center fielder Brian Goodwin. The Cardinals turned a leadoff double by Matt Carpenter and a walk to Harrison Bader into a two-run second inning, and the Reds rallied for two runs in the top of the third.

The Reds were able to tie the game in the top of the third when left fielder Austin Dean appeared to lose a routine fly ball in the sun. Dean camped under the fly ball, only to then wave as if he lost it. The ball landed in front of him, and that became a two-out RBI double for Eugenio Suarez. It put the tying run at third base, and that runner would eventually score on a bases-loaded walk.

All of that added to the already mushrooming pitch count for Carlos Martinez.

The Cardinals righthander walked two batters -- one intentionally -- in that third inning, and was able to escape further trouble with a three-pitch strikeout of Goodwin.

Martinez handled the fourth, but has thrown 90 pitches to get 12 outs.

He has eight strikeouts, and that has also inflated his pitch count to a point where he was out of the game after four innings. He allowed the three runs on six hits and two walks.

Opposite Martinez, Tyler Mahle pitched into the third inning, but not out of it. The righthander allowed three runs on four hits and four walks through 2 2/3 innings. Mahle allowed two baserunners to open the third inning and then promptly struck out the next two batters without the Cardinals advancing either runner.

Robert Stephenson took over for Mahle with the two runners on base and struck out Dean to end the inning.

Dean was removed from the game shortly there after. To go with the missed fly ball he has two strikeouts and a couple odd swings in that third inning at-bat as if he wasn't picking up the ball well.

An explanation is forthcoming from the Cardinals.

UPDATE: Dean was removed from the game with soreness in his right elbow. The team has not disclosed the severity of the soreness, and that will likely be evaluated before the team heads to Milwaukee on Sunday night.

With a double in the first at-bat of his first start with the Cardinals and four times on base in the game, it was an easy call for Austin Dean to be back in the lineup Sunday against Cincinnati.

With a three-run homer that turned a taut game into a stroll, it was a likely bet that Harrison Bader would get an encore in center field.

The Cardinals are turning in a new direction.

Rangel Ravelo, the pinch-hitting first baseman and sometimes designated hitter, will start in the corner opposite Dean as the Cardinals look to win their third series of the season against the Reds. Ravelo has expanded his versatility with work in the outfield during spring training and even appearances at third base during the July "Summer Camp." He's starting in right because of Dean's familiarity and innings logged in left in his career.

Ravelo's bat gets him in the lineup and forces the Cardinals to find a spot for him, just as the innings that Tommy Edman has played all over the field gives the team reason to rest the switch-hitter on the eve of five games in three days at Miller Park.

The Cardinals are treating the outfield almost like a bullpen.

So, if it's Sunday, it's Bader flanked by Dean and Ravelo, and on Monday for the doubleheader against the Brewers it will be a mix of the producers from today and the matchups for tomorrow and some leftover from the performance yesterday.

The Cardinals have settled on their rotation, somewhat, for the series vs. the Brewers. Here goes:

Carlos Martinez moves up a day to stay on normal rest and replace Oviedo for the start Sunday against the Reds. It will be Martinez's first start against a team not named the Minnesota Twins, and it should also be a chance for him to pitch deeper into the game. Martinez had a limited pitch count in his return to the rotation this past week against the Twins, and he'll be closer to that 80 or 90 pitch mark if he throws well Sunday.

Check back throughout the afternoon and evening here at C-Beat for live coverage of the game from Busch Stadium. Rick Hummel will be at the keyboard for all of the Cardinals coverage in Monday's paper, and the Post-Dispatch will again be heading out on the road to bring coverage from the the away games on the final road trip of the regular season.

Deep Brews: Milwaukee crushes Cardinals, 18-3, leaving them fuming and their pitching on fumes

Righthander is 0-2 with an ERA near 5.00 at one of the hitter-friendly ballparks in a division that has had so little offense overall in 2020.

It's harder for position players like Austin Dean, who made his first start for the Cardinals on Saturday, to stay ready in Springfield.

Cardinals seek spark with new mix in outfield while Hudson goes for encore vs. Reds

The only team in the majors that regularly bats its outfielders in the bottom three spot of the lineup, the Cardinals are shuffling the availa…

Rookies Crismatt, Elledge throw themselves into the mix of Cardinals' constantly revised bullpen

Cardinals place Oviedo in quarantine; rookie had contact with person who tested positive for COVID-19

Rookie pitcher will miss his start Sunday but could return from isolation on Monday, if he continues to test negative for the virus.

Molina honors Clemente by wearing No. 21, smacking a homer

Cardinals catcher makes it special with home run in first game of doubleheader.

How Jack gets his groove back for Cardinals' stretch run, showdowns with Milwaukee

Cards ace Jack Flaherty still struggling with pitch count and getting back in top form.

Cardinals outfielder Harrison Bader scores in the 2nd inning on Sunday, Sept. 13, 2020, of a game against the Cincinnati Reds at Busch Stadium in St. Louis, Mo. Photo by Christian Gooden, cgooden@post-dispatch.com