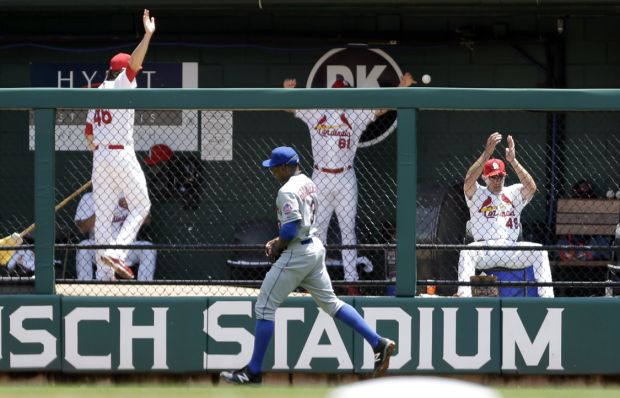 Matt Carpenter's leadoff homer in the first inning lands in the Cardinals' bullpen as Mets right fielder Curtis Granderson pulls up from chasing it. The Cardinals would not score again until the ninth and lost 3-2. (AP Photo/Jeff Roberson) 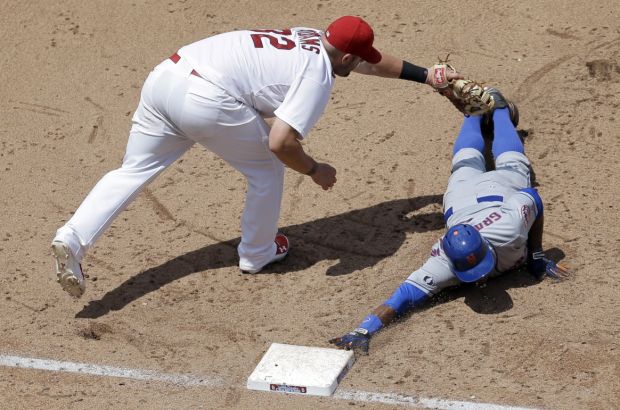 Same as it ever was.

Colon improved his career record to 4-0 against the Cardinals and has never pitched in a game in which his team lost to St. Louis.

"We've had trouble with him a couple of times,' Cardinals manager Mike Matheny said.

"He's a guy who used to have overpowering stuff. But now he's learned how to mix it up, mix speeds ... how to expand the plate. He's pitched some good games against us."

After giving up a leadoff homer to Matt Carpenter, Colon allowed just three more Cardinals hits over the next seven innings and improved his season record to 7-5. He struck out one and issued no walks in a remarkably efficient performance.

The 41-year old Colon departed after eight innings - pinch-hit for by 40-year old Bobby Abreu in the top of the inning. And that's when things got exciting.

Reliever Jenrry "Don't Call Me Miguel" Mejia replaced Colon to pitch the ninth and ran into immediate trouble. Carpenter led off with a double and the next batter, Jon Jay, was hit by a pitch. The tying runs were at first and second with no outs.

But Mejia induced a double-play grounder from the next batter, Matt Holliday, to change the landscape. Allen Craig followed with an infield hit, chasing home Carpenter to trim the deficit to one.

But lefthander Dana Eveland came on to retire Matt Adams on a grounder to short.

It was the fifth consecutive winning decision for Colon, who has not allowed more than two earned runs in his last six starts.

Cardinals pitchers, meanwhile, had not allowed more than two runs in their last five games and seven of the last eight. But leading 1-0, starter Lance Lynn (7-5) was touched for two runs in the sixth and reliever Seth Maness yielded a New York insurance tally in the seventh.

Oddly enough, the two-run rally by the Mets in the sixth was sparked by a leadoff double from Colon. The hit was his first in 27 at-bats this season and the extra-base hit was the first of his 17-year career. Colon later scored his first run since 2002.

"Heck, he  was due, I don't know," Lynn said, trying to explain what happened. "He has a good swing, in all honesty. I was surprised by it, but I have to make a better pitch. That's what it came down to.

"I didn't make a good pitch and then the next guy was able to get a ball up a little bit. I left a couple of balls up in that inning and they scored two runs, and that's what cost us the game."

The Cardinals were 7-1 against NL East division teams before the loss.

The club will open a series with the Philadelphia Phillies at 7:15 p.m. Thursday, with Shelby Miller (7-5) against David Buchanon (2-3).

The New York Mets reached reliever Seth Maness for an insurance run in the top of the seventh inning at Busch Stadium III, increasing their lead to 3-1.

Starter Lance Lynn departed the game after pitching six innings, allowing five hits and two runs. Maness made his 26th appearance to begin the seventh, but he ran into trouble.

With one out, Wilmer Flores singled to right. Mets pitcher Bartolo Colon then dropped down his second successful sacrifice bunt of the game, to go with his sixth-inning double and run.

With two outs, Eric Young Jr. shot a ground-rule double into the seats down the left-field line, scoring Flores to increase the Mets' lead to 3-1.

Manager Mike Matheny replaced Maness at that point with Randy Choate. The lefthander fanned Daniel Murphy to end the inning.

The visiting New York Mets got help from an unexpected source to overtake the Cardinals and grab a 2-1 lead in the top of the sixth.

Pitcher Bartolo Colon, 0 for 26 this season as he stepped to the plate, pulled a double into the left-field corner to start the frame. Stranger things have happened, but not many.

The extra-base hit was the first of Colon's 17-year major league career, his 11th hit overall.

Moments later, Eric Young doubled to right-center, chasing home Colon and tying the game 1-1. It was the first run Colon has scored since he played for Montreal in 2002, and just the second run of his career.

One out later, David Wright dumped a bloop hit down the right-field line to chase home Young and give the Mets a 2-1 lead. Wright attempted to stretch his hit into a double, and seemed to have it made. But he was called out for coming off the bag as Daniel Descalso applied a tag.

Cardinals starter Lance Lynn invited more trouble by walking the next two batters, but he struck out Chris Young to avoid more damage.

The Cardinals and Lance Lynn carried a 1-0 lead into the bottom of the fourth against the New York Mets, thanks in part to some defensive work from Jon Jay.

New York's Daniel Murphy started the fourth with a line drive single to center. Starting in center field, Jay dashed to his left to cut the drive off in right-center.

But Jay is not known for his throwing ability, so Murphy, who has 11 steals this season, rounded first and kept on going to second.

Jay came up throwing and fired a one-hop strike to second, where shortstop Daniel Descalso applied the tag. Unable to stay out of arm's way - so to speak - the speedy Murphy was out.

The assist was the first of the season for Jay.

In keeping with baseball tradition, Jay led off the bottom of the inning. He then accomplished what Murphy could not, ripping a drive into center and stretching it into a double, sliding under the tag.

Matt Carpenter got a rare night off on Friday, with Daniel Descalso starting at third base for the Cardinals in a 5-2 victory over the New York Mets.

But Carpenter definitely is back on today.

The Cardinals' third baseman was in the starting lineup and opened the bottom of the first inning by pulling a home run off New York starter Bartolo Colon. The homer into the right-field bullpen gave the Cardinals an early 1-0 lead.

It was the third game-starting homer of Carpenter's career and first of this season. The homer also was the third of the season overall for Carpenter and increased runs-batted in to 26.

The Cardinals now have hit home runs in five of the six games of the homestand. Scientists are testing the water at Busch Stadium III, as we speak.

The Cardinals are playing a day game after a night game this afternoon. What's more, they are playing on a day where the temperatures are projected to be soaring.

That said, five consecutive wins notwithstanding, there will be a few changes in the lineup when the team faces righthander Bartolo Colon and the New York Mets at Busch Stadium III.

For starters, literally and figuratively, Matt Carpenter will be back in the starting order, playing third and hitting leadoff. Carpenter was given the night off against lefty Jon Niese in a 5-2 Cardinals victory on Friday.

Outfielder Peter Bourjos, who batted leadoff on Friday, will be on the bench today as surging Jon Jay moves to center field. Jay started in right on Friday, while Allen Craig played at first.

Matt Adams will be back at first base today, with Craig moving to right field. In addition, Kolten Wong replaces Mark Ellis to start at second base and Daniel Decalso gets a second consecutive start, moving over to shortstop.

The lefthanded-swinging Decalso played third base on Friday, but will give Jhonny Peralta a day off today with Lance Lynn pitching.

Dan O'Neill is a reporter for the St. Louis Post-Dispatch

The Cardinals are showing signs of separating themselves from the pack, but the Phillies are coming in confident and talking about pushing for…

Plus: Bytes on Sam Freeman's value, a Milwaukee campaign to unseat Yadier Molina, and evidence that batting coaches can make a difference.

Standings: Cards trail by 7 at the break

Matt Carpenter's leadoff homer in the first inning lands in the Cardinals' bullpen as Mets right fielder Curtis Granderson pulls up from chasing it. The Cardinals would not score again until the ninth and lost 3-2. (AP Photo/Jeff Roberson)