Cooperstown Call: Walker, who closed his career with Cardinals, joins Jeter in Hall of Fame class 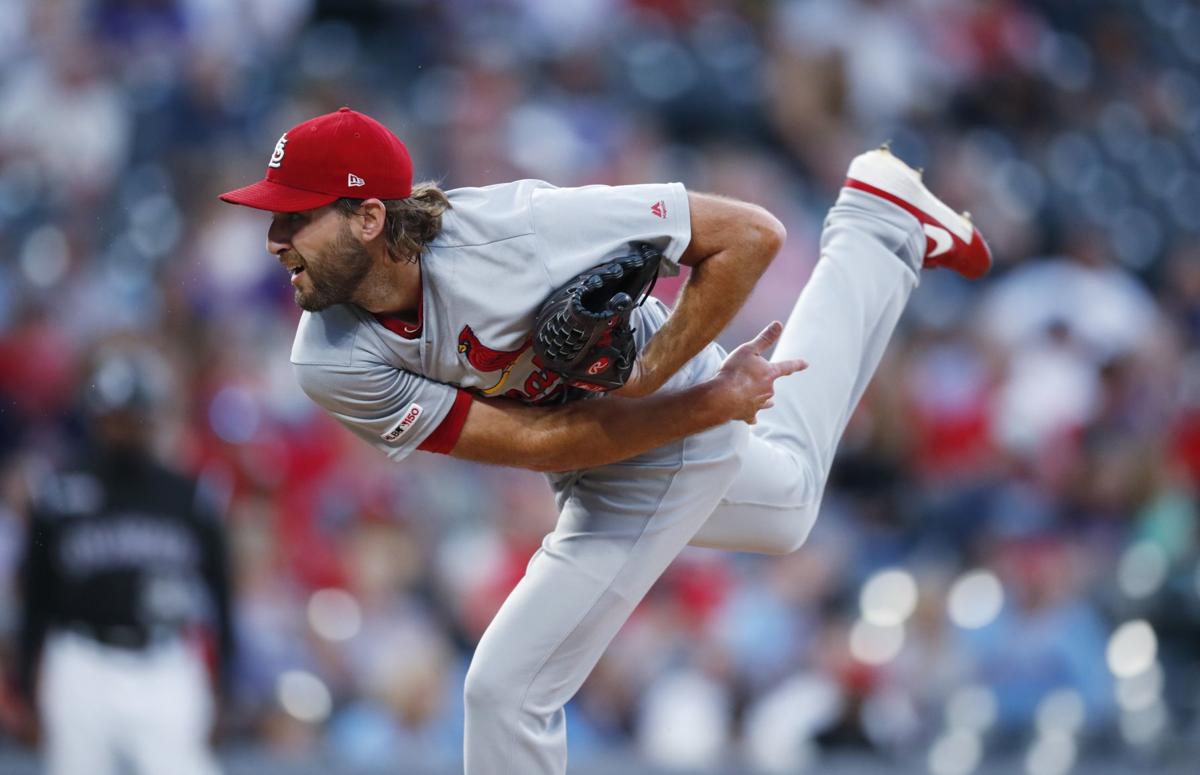 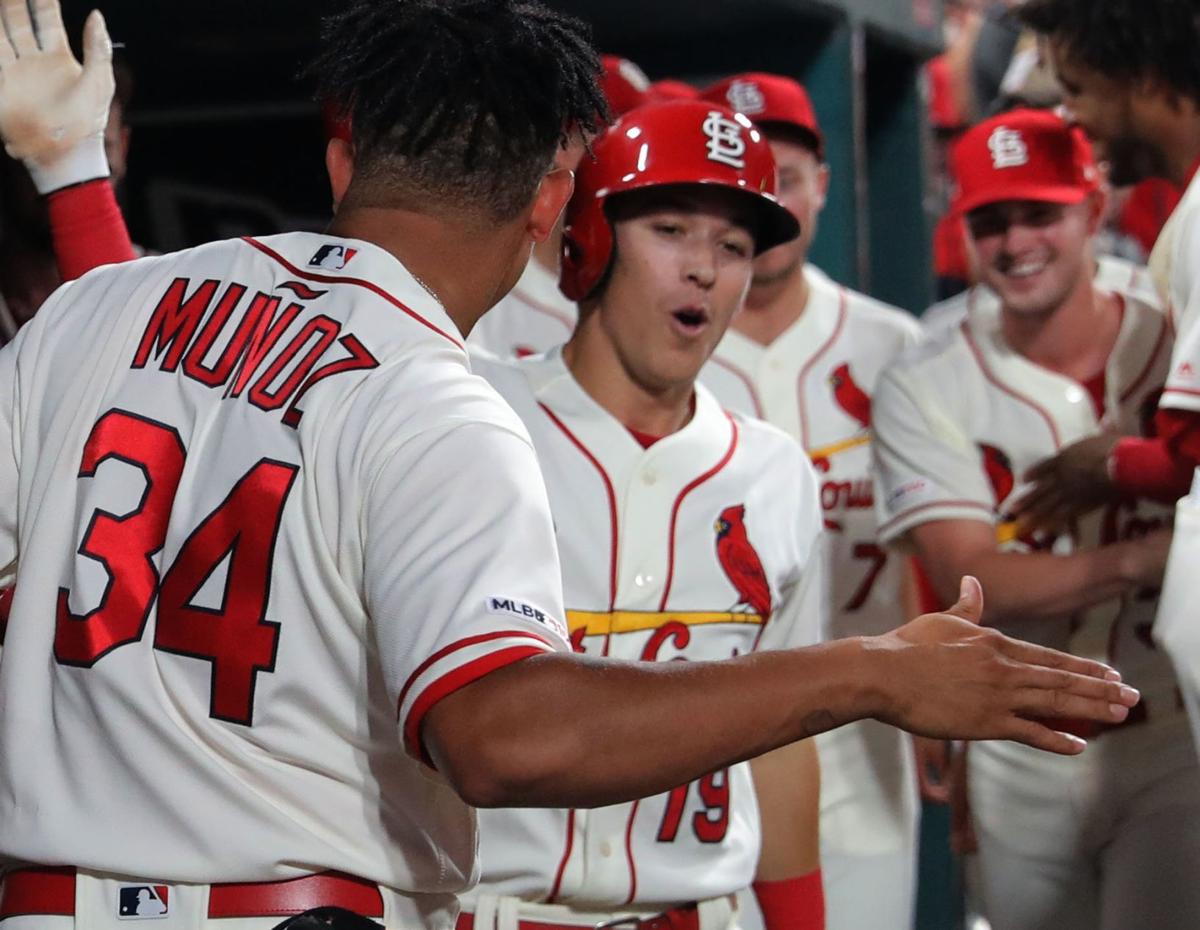 DENVER — Before the Cardinals reach the stretch of games that will decide the division title and things really get rocky, they conclude their schedule against lackluster teams with a visit to Coors Field and a series against one of the National League’s most disappointing clubs that can play as thin as its air.

But, it does have Nolan Arenado.

One of the best all-around players in the game, Nolan Arenado did Nolan Arenado things Tuesday night – launching moonshots, heisting singles – and led the Rockies to a breezy, 2-1 victory against the Cardinals in front of a partisan, red-clad crowd in Denver’s lower downtown ballpark. Arenado’s two-run homer in the first inning off Cardinals starter Michael Wacha proved the be all the runs the hosts would need as starter Chi Chi Gonzalez and a parade of relievers allowed the Cardinals to hint at rallies, but never make them.

Once they leave Colorado, the Cardinals begin a stretch of 16 games to conclude the regular season – and all 16 will be against teams with a winning record. The race in the National League Central shifted dramatically Tuesday night for Milwaukee as reigning MVP Christian Yelich, a candidate to repeat as MVP this season, left the game with a fractured knee cap. The team announced that he would miss the remainder of the season. The Brewers will visit Busch Stadium this weekend to start the gauntlet that the Cardinals must survive to reach the playoffs for the first time since 2015.

Coming off his short-rest start that helped the Cardinals set their rotation for that run of contending teams, Wacha had his start abbreviated again Tuesday – this time by strategy more than his performance. Wacha struck out three and allowed five hits through four innings. He left changeup over the plate to Arenado with a runner on in the first inning, and Arenado drove it beyond the bleachers stationed past left field. The ball traveled an estimated 482 feet. The homer was Arenado’s 38th of the season and the 500th extra-base hit of his career. He joins former Cardinal Larry Walker as one of four players in Colorado history with that many extra-base hits for the club.

One of the last spasms of unsuccessful offense came in the top of the eighth for the Cardinals – not with a swing or a walk, but with a slide that dodged a brilliant play by Arenado.

Rockies reliever Jairo Diaz had retired the first two batters of the inning when he faced birthday boy Paul Goldschmidt. The Cardinals’ 32-year-old first baseman and longtime Rockies rival as an Arizona Diamondback hit a hard groundball down the third base line. As familiar as anybody with Arenado’s magic at the hot corner, Goldschmidt sprinted for first – and when Arenado’s throw brought first baseman Daniel Murphy off the bag, Goldschmidt dropped into a feet-first slide that went outside of the base and past it. Along the way he limbo’d under Murphy’s attempted tag to steal a single.

It proved fruitless when a strikeout ended the inning, with Goldschmidt still standing at first base. He was the sixth runner the Cardinals left on base in the game.

Three were left in scoring position.

The move for a pinch-hitter in the top of the fifth inning would have been more compelling, more urgent, more barstool debate-worthy had it happened in any of the summer months before September. But with both the bases and bullpen loaded, the choice to yank Wacha early from his start and go for the gusto of offense was obvious.

A fielding error at first and back-to-back singles from the bottom of the lineup brought Wacha’s spot up with the bases loaded, two outs, and one run separating the Cardinals from the Rockies. With at least three long relievers, including Ryan Helsley, available in the bullpen and a total of a dozen relievers on the expanded roster, manager Mike Shildt sent Matt Carpenter to the plate and ended Wacha’s start after four innings. The expanded rosters of September allowed him to take a chance with the bases loaded and plenty of arms to cover the innings in the night and days ahead. While so tantalizing at any point in the season, a move like that in July or August might leave a pitching staff exposed in another game during the series at Coors.

Carpenter, a .481 hitter with the bases loaded, flipped a line drive that fell shy of shallow center field and into the shortstop’s glove for an out that broke the rally.

Dexter Fowler grounded out to end the inning.

The bases – loaded with one out – remained so at the third out.

So it went for the Cardinals as they teased, teased, teased breakthroughs against Rockies starter Chi Chi Gonzalez and did nothing but push one run home against the righthander. A replay review of a play at second base showed that Marcell Ozuna did not steal it in safely in the second inning and instead was part of a double play strikeout to end the inning. In the fourth, Fowler sped for a leadoff double. He took third on a groundball to the right side. And then he scored the Cardinals’ first run on another groundout. Goldschmidt got his 81st RBI of the season with that run.

Gonzalez would turn a one-run game over to the Rockies embattled bullpen for the seventh inning. Winless in his nine starts this season, Gonzalez held the Cardinals to the one run on Goldschmidt’s groundout through six innings. He struck out Goldschmidt twice on his way to four strikeouts total, and only Fowler’s hit wasn’t a single against the righthander.

It didn’t take long for the Rockies’ bullpen to escort the Cardinals to another chance to tie the game. Bryan Shaw walked the first batter he faced. He hit the second batter he faced.

The Rockies were again on the ledge, poised to slide.

Righthanded reliever Carlos Estevez entered and promptly struck out the two batters he was assigned. Each came to plate with the tying run at third base. Each didn’t budge the tying run from third base. Esteve got pinch-hitter Jose Martinez on three pitches. The Cardinals slipped to one-for-eight with runners in scoring position, and the one hit was a single that just moved a runner to third, not brought a run home.

The Cardinals got a one-out single in the ninth, and the game ended with a double play, one confirmed by replay.

On the brink of schedule's final exam, Cardinals can elevate their lead vs. Colorado

Whenever a new schedule comes out, the media and the fans are far more likely to scan the months looking for landmines that might away the Cardinals. A three-city trip west here, a bad turnaround for a series at Wrigley Field there, a soft spot at home late in July, right on the cusp of the trade deadline. As if the schedule, like some Rosetta Stone, can unlock how a team will contend months before it starts.

Managers and players tend to play the schedule as it arrives, not read it ahead of time.

There is one exception.

A few managers and coaches through the years have checked when the Cardinals would go to Colorado and, fingers crossed, hope to find it in September, when rosters are bloated with pitching. Wish granted. For last time. As if one final farewell to the use of the 40-man roster as we know it, the Cardinals head to Coors Field with full access to as many players as they've promoted from the 40-man roster*.

* Next year the Cardinals visit Coors in April, and even if they came in September new rules will limit rosters with what's essentially baseball's equivalent of the healthy scratch. It's about time.

This year's schedule, however, does tell a tale.

For those with a keen eye coming out of July, you saw a run of teams on the Cardinals schedule that would allow, if they played well, to gain ground in the standings. They had to survive the Oakland-LA road trip -- they got through it, didn't win a game -- and then feast. And they did. The stretch of wins through August and into September against losing teams and tanking teams and listless teams vaulted them into the lead in the National League Central. And, if you look ahead to the schedule now, here comes the briar-patch.

After three games at Coors Field, the Cardinals return to Busch Stadium to face, in order:

And then they face the Cubs in seven of their final 10 games. While the Cardinals are playing the third-place Brewers and the wild-card leading Nationals, the Cubs have their soft spot in the schedule, facing Pittsburgh and Cincinnati. The schedule that giveth also giveth to the Cubs.

To start the series at altitude, the Cardinals turn to Michael Wacha. When last the righthander handled a game he was doing so on short rest so that the Cardinals could set up their rotation for the coming weeks. He started that game with some pitch limits, and he was out of it after 38 pitches. He did not allow a run. The rest of the game did not go as well for the Cardinals.

This time he's on extra rest, and the only limits are poor results.

Here's the lineup that will back it:

Check back throughout the evening here at C-Beat and StlToday.com for coverage from the Cardinals visit to LoDo.

Confounded by Coors: Cardinals quieted again as they tumble, 2-1, to Rockies

DENVER — For several days, as is custom ‘round Coors Field, the Cardinals have fielded questions about the challenges of Colorado’s ballpark a…