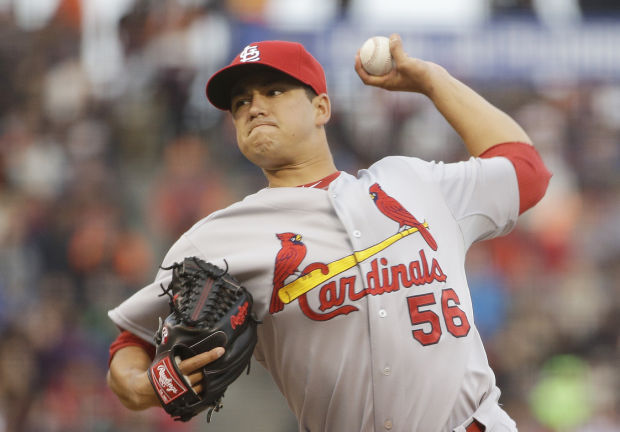 The Cardinals drafted lefty Marco Gonzales as a starting pitcher, but he could wind up in their bullpen for 2015. (AP Photo) 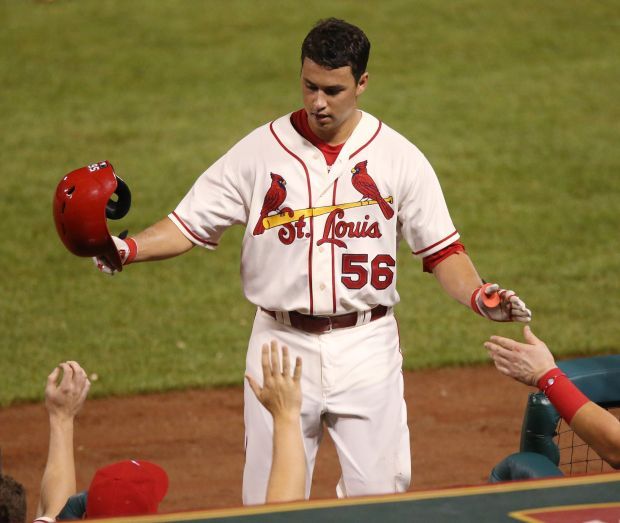 St. Louis Cardinals pitcher Marco Gonzales is congratulated by teammates after executing a sacrifice bunt in fifth inning action during a game between the St. Louis Cardinals and the Chicago Cubs on Saturday, Aug. 30, 2014, at Busch Stadium in St. Louis. Photo by Chris Lee, clee@post-dispatch.com

Prospects at the extreme ends of the Cardinals’ organization — one on the verge of an increased role in the majors, the other on the verge of increased expectations on the way to the majors — received the club’s highest minor-league awards Thursday.

Marco Gonzales, who will get a chance this spring to win a spot in the big-league rotation, was named the Cardinals’ pitcher of the year, according to the club and its farm director Gary LaRocque. Magneuris Sierra, a teen outfielder, was introduced as the team’s player of the year after winning the Gulf Coast League’s batting title and emerging as the next high-profile talent from the team’s academy in the Dominican Republic. He is the youngest prospect to win the club’s player or pitcher of the year award in its past two decades.

Sierra is regarded as a prospect baseball will know.

“What’s happened with Sierra is until doing what he did in the GCL he was unknown outside of the Cardinals and really even outside of the academy,” said Moises Rodriguez, the Cardinals’ director of international operations who, among his responsibilities, heads scouting in Latin America. “When you see what he did in the GCL, the numbers he had there, the performance for his age and the position he plays, it is exciting. You do have to take notice.”

Sierra, 18, batted .386 for the GCL Cardinals, the club’s lowest affiliate in the States. His .434 on-base percentage ranked third in the league and he stole 13 bases in 52 games. A native of San Cristobal, Dominican Republic, Sierra is a lefthanded-hitting, lefthanded-throwing center fielder who was one of the finest at his position in the lower league and is expected to advance as an above-average fielder. The manager of the Mets’ GCL affiliate, Jose Carreno, told Baseball America that Sierra was “the most exciting player” in the division.

Gonzales, 22, pitched at four different levels for the Cardinals in 2014, starting at High-A Palm Beach and ending the season in San Francisco as a part of the Cardinals’ postseason bullpen. He won two games in relief during the National League division series against the Los Angeles Dodgers, including the win in the series clincher.

The 19th overall pick in 2013, Gonzales made his debut less than a full season removed from his final pitch for Gonzaga. He made a spot start for the Cardinals on June 10 in his home state against Colorado. He made four other starts for the Cardinals. Overall, Gonzales was 13-7 with a 2.81 ERA, and that included a 9-5 record with a 2.43 ERA in 21 minor-league starts. The Cardinals plan to give Gonzales a chance to duel with Carlos Martinez for the spot in the rotation left open by trading Shelby Miller to Atlanta.

Martinez has the edge, and the Cardinals are eager to see what Gonzales would then do as a reliever. He could start the year in a role similar to what Adam Wainwright had in 2006, though Gonzales has a head start on earning late-inning assignments as a setup lefty.

“He’s just a really special man,” Cardinals general manager John Mozeliak said. “He’s a baseball player. He does a lot of the little things right, goes about his job almost as a mature veteran (would). … Clearly, we look at him long-term as a starter. But when you look at how he can have an opportunity to make our club next year, if he doesn’t crack the rotation I could envision him having some role in our bullpen based on how he pitched.”

Although the first lefty to win the pitching award since Tyler Johnson in 2002, Gonzales fits other traits of many past winners of the organization’s top minor-league award — high performance and a high level to go with a high draft pick. Past winners have included early picks like Kolten Wong, Shelby Miller (twice), Colby Rasmus (twice), Lance Lynn, and Rick Ankiel (twice). Albert Pujols won the player of the year award for the minors in 2000 just before his debut in the majors. Oscar Taveras won in 2012, and Sierra joins the late Taveras as the only two players from the Cardinals’ Dominican academy to win the honor.

But Sierra is unlike most winners.

Sierra signed in 2012 at 16 for a bonus of $104,000 — about midrange for the market — and was with the Dominican academy until this past summer. He is the first from a short-season affiliate — that is, one that starts at midsummer — to win the Cardinals’ player of the year award. Sierra is the first teenager to win the player of the year award since Brent Butler did in 1997 and only the second teenager to win either award since 2000.

The awards will be presented to the two players at the 57th annual St. Louis Baseball Writers’ Dinner on Jan. 18, an event held the same weekend as Winter Warmup.

Derrick Goold looks at what the top minor-league honors might mean for the careers of Marco Gonzales (pitcher) and Magneuris Sierra (player).

Cards lose out to Pirates in bidding for Korean shortstop

A road trip north to Cardinals spring training site, where three 18-year-old newcomers to pitching and the organization are learning the game.

Luhnow reflects on the impact of Taveras

10 Questions: Goold on the Cardinals

What will it take to keep Heyward and Lackey? Can Wacha bounce back? Where does Wong fit in the batting order? Baseball writer Derrick Goold f…

With their moves made early and Reynolds on board, it's possible to project the club's 25-man roster for opening night at Wrigley.

Matheny picks No. 26 to honor a friend

As Cardinals' number changes continue, manager was inspired to pay tribute to a family's loved one. Rosenthal shifts to No. 44.

The Cardinals drafted lefty Marco Gonzales as a starting pitcher, but he could wind up in their bullpen for 2015. (AP Photo)

St. Louis Cardinals pitcher Marco Gonzales is congratulated by teammates after executing a sacrifice bunt in fifth inning action during a game between the St. Louis Cardinals and the Chicago Cubs on Saturday, Aug. 30, 2014, at Busch Stadium in St. Louis. Photo by Chris Lee, clee@post-dispatch.com