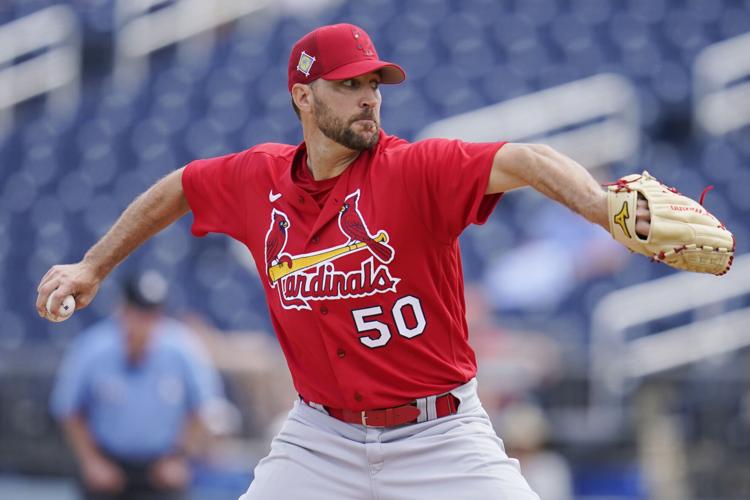 The Cardinals' Adam Wainwright pitches Wednesday, when he made yet another exhibition-game start against the Houston Astros. 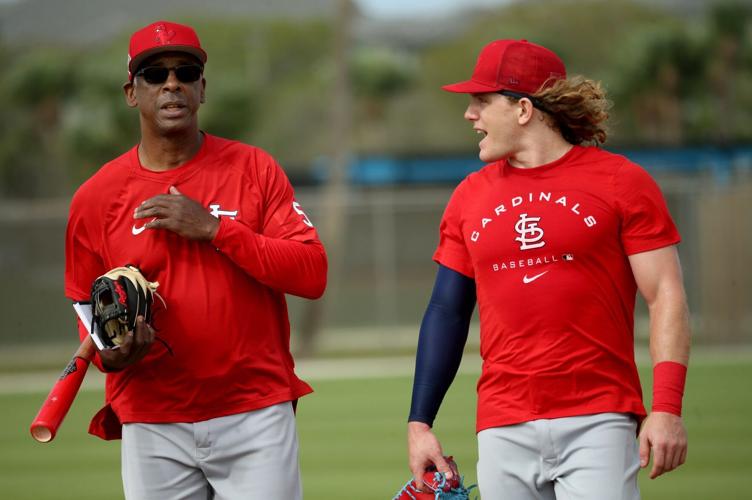 WEST PALM BEACH, Fla. — With the threat of rainstorms washing out the Saturday night game at the Ballpark of the Palm Beaches, the Cardinals rewrote their pitching plans.

Adam Wainwright threw 89 pitches and five simulated innings against the same teammates over and over and over again. Albert Pujols, Nolan Arenado, Lars Nootbaar, Tyler O'Neill, Paul Goldschmidt and Dylan Carlson each had at least four plate appearances against the veteran righthander. At least two had seven.

The line was inconsequential because sometimes hitters would run the bases and other times they would not.

The work was essential.

Wainwright was able to get his pinch count to the brink of 90, and he'll be ready to throw at least 100 on Thursday against the Pittsburgh Pirates as the Cardinals host opening day at Busch Stadium.

In one of the later exchanges against teammates, Carlson hooked a single to right field on a breaking ball. Nootbaar drew a walk. O'Neill followed with a home run to dead-center field. Pujols singled on the next pitch. At one point, Wainwright felt he had a called strike three on a teammate with a cutter that caught the black of the plate. Umpire Skip Schumaker felt otherwise.

The Cardinals had the corner players appear against Wainwright and took the middle of the field south to face the Astros.

BADER AVOIDS ARBITRATION: Centerfielder Harrison Bader agreed to a two-year extension with the Cardinals, the Post-Dispatch confirmed. There will be more on this at StlToday.com.

He's in the lineup if the game does start. It is currently delayed by rain and severe weather in the area. Fans have been asked to seek shelter.

Check back later this evening for updates from the game and from all the news at Cardinals camp on Saturday. In Sunday's paper and online will be the Post-Dispatch's 2022 Cardinals season preview and Rick Hummel's exclusive interview with Albert Pujols.

These developments would keep the good vibes rolling as the Cardinals round third and prepare to head home.

‘I know how many swings I need’: Pujols jumps into lineup at cleanup on first full day back with Cardinals

A fit for fifth starter? Cardinals want VerHagen to ‘run’ with opportunity even after Thursday’s stumble

Right-hander allowed seven runs on seven hits before he got an eighth out. One walk and a misbehaving sinker kept him from likely being named to rotation.

The Cardinals' Adam Wainwright pitches Wednesday, when he made yet another exhibition-game start against the Houston Astros.