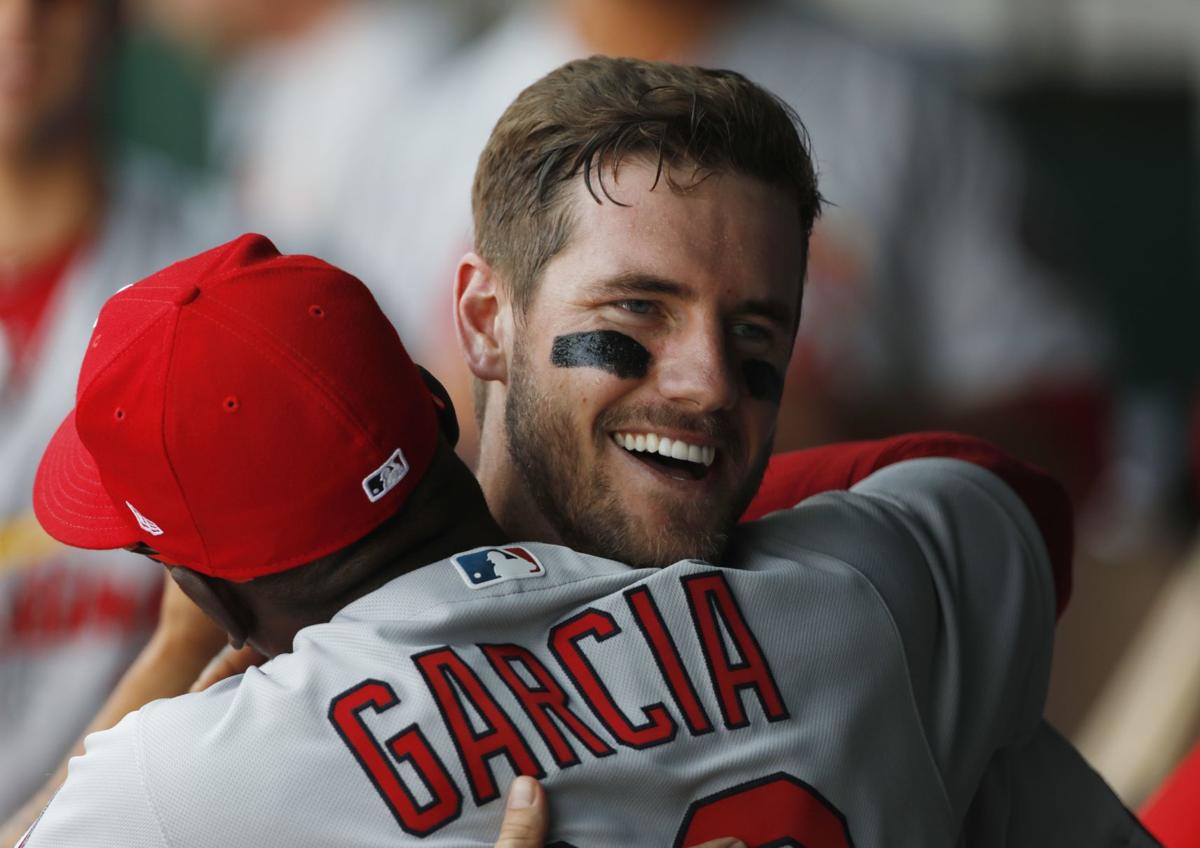 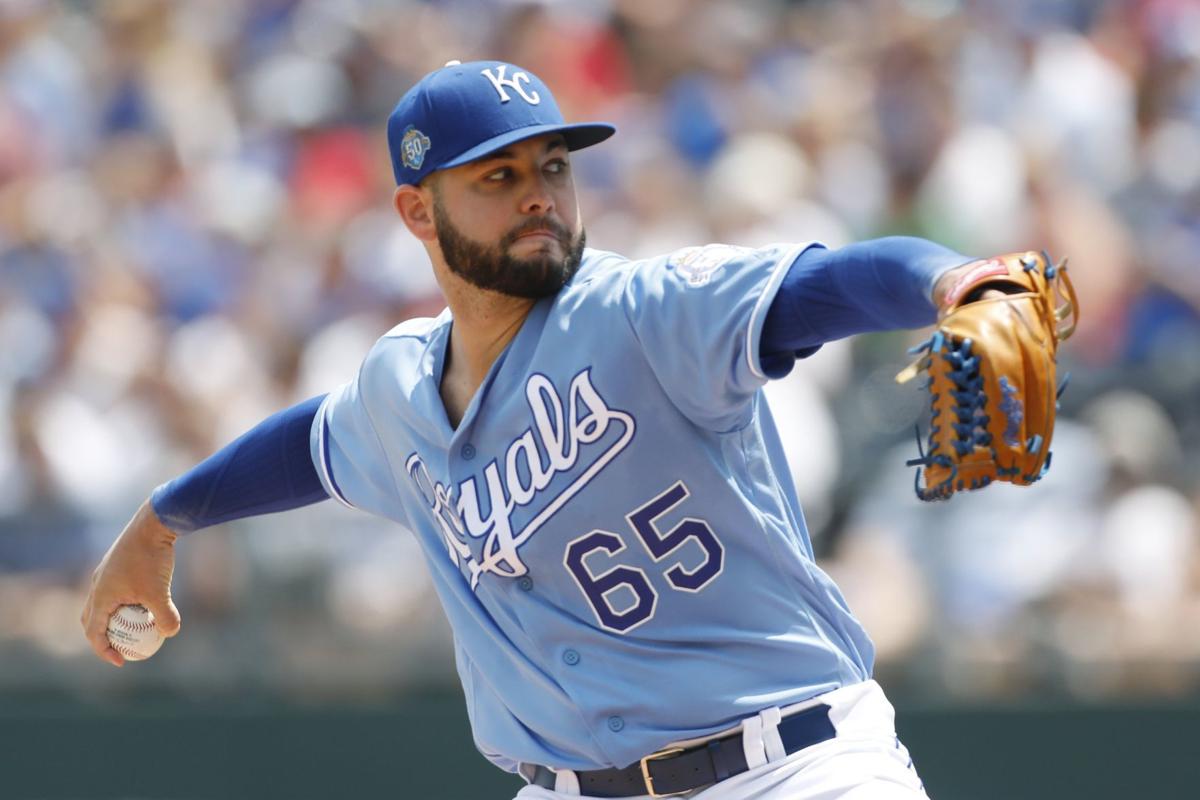 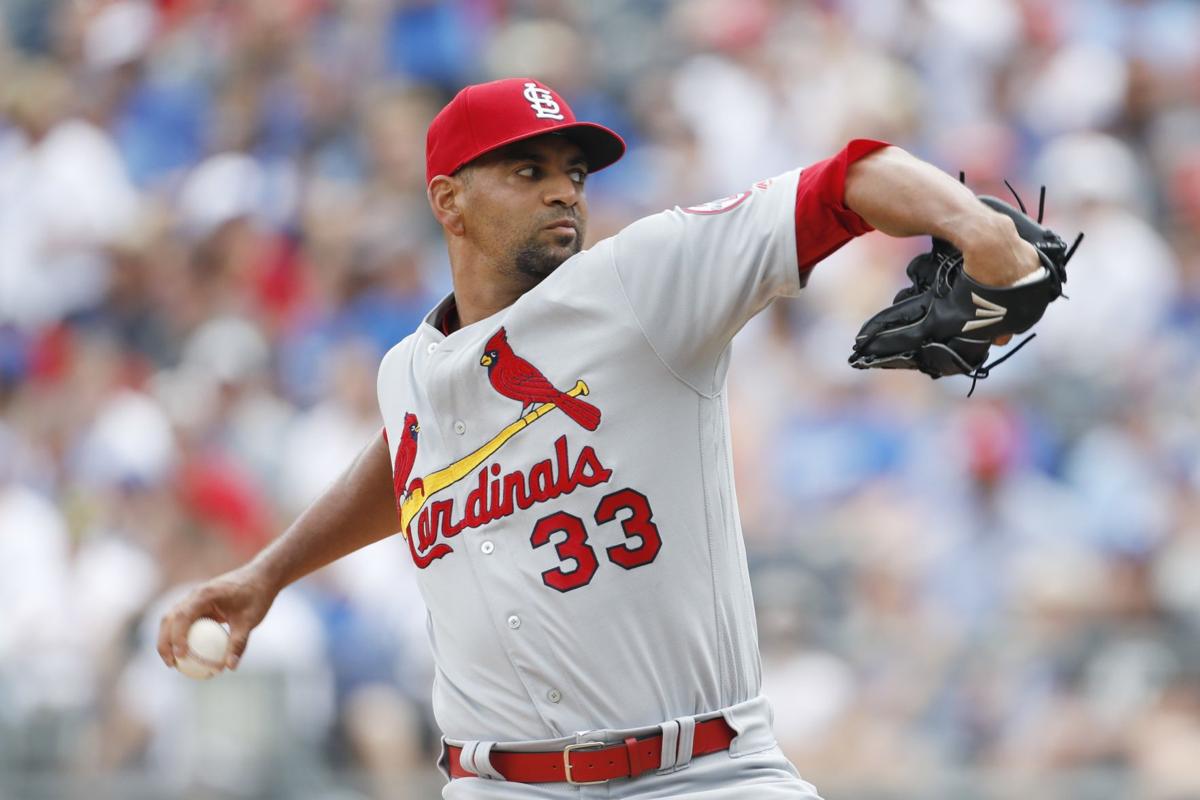 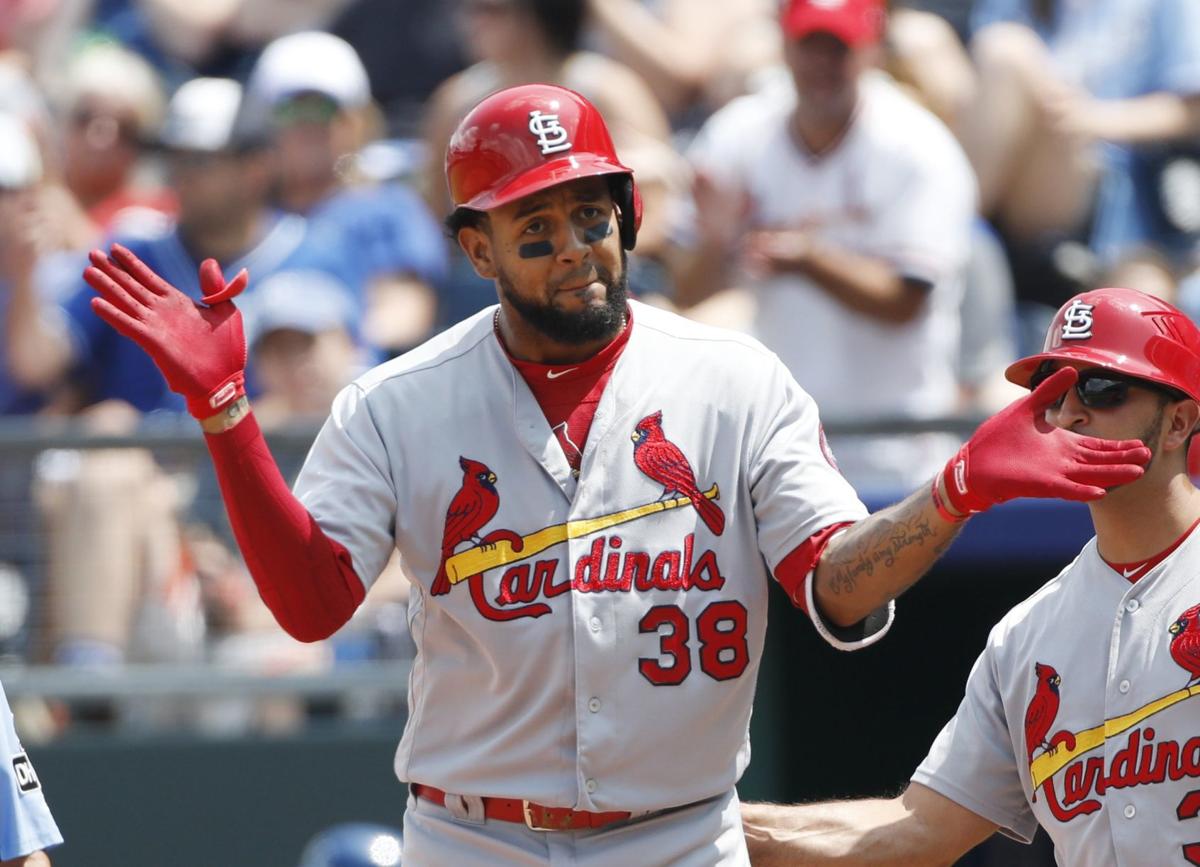 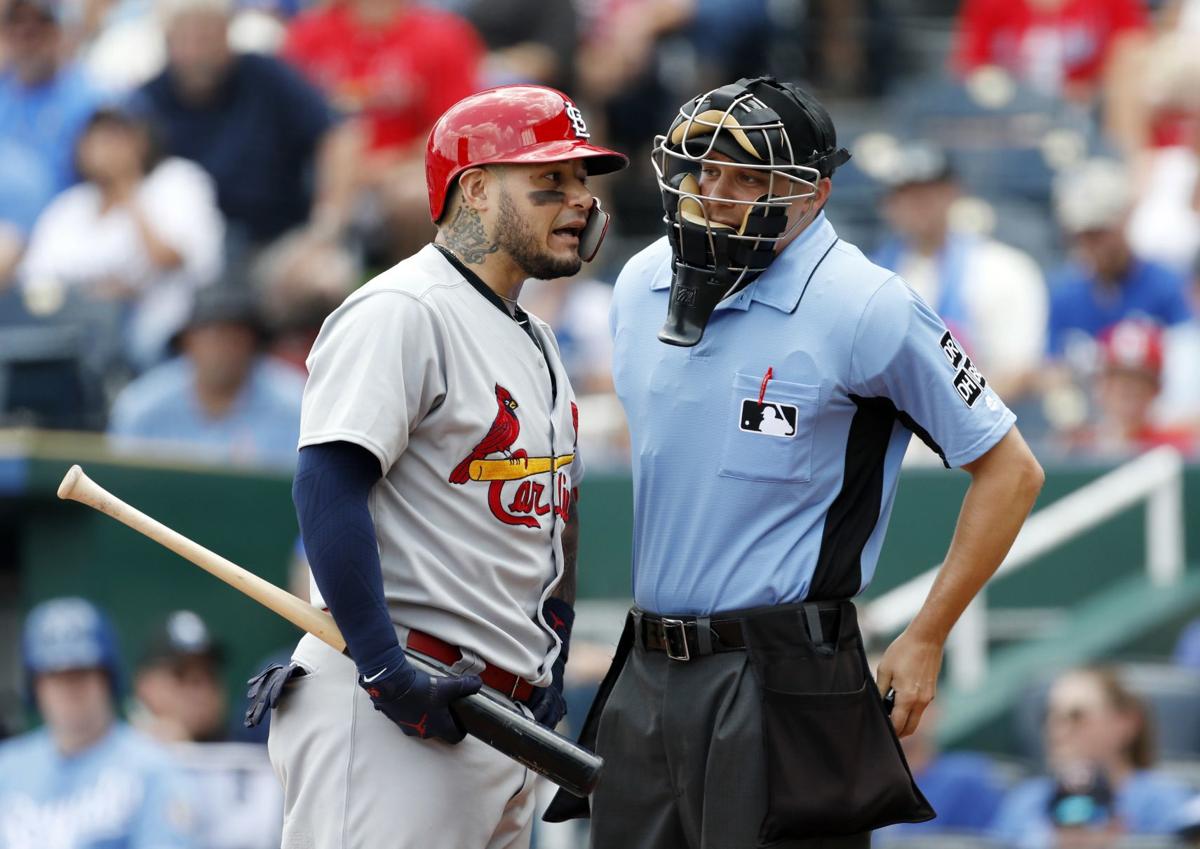 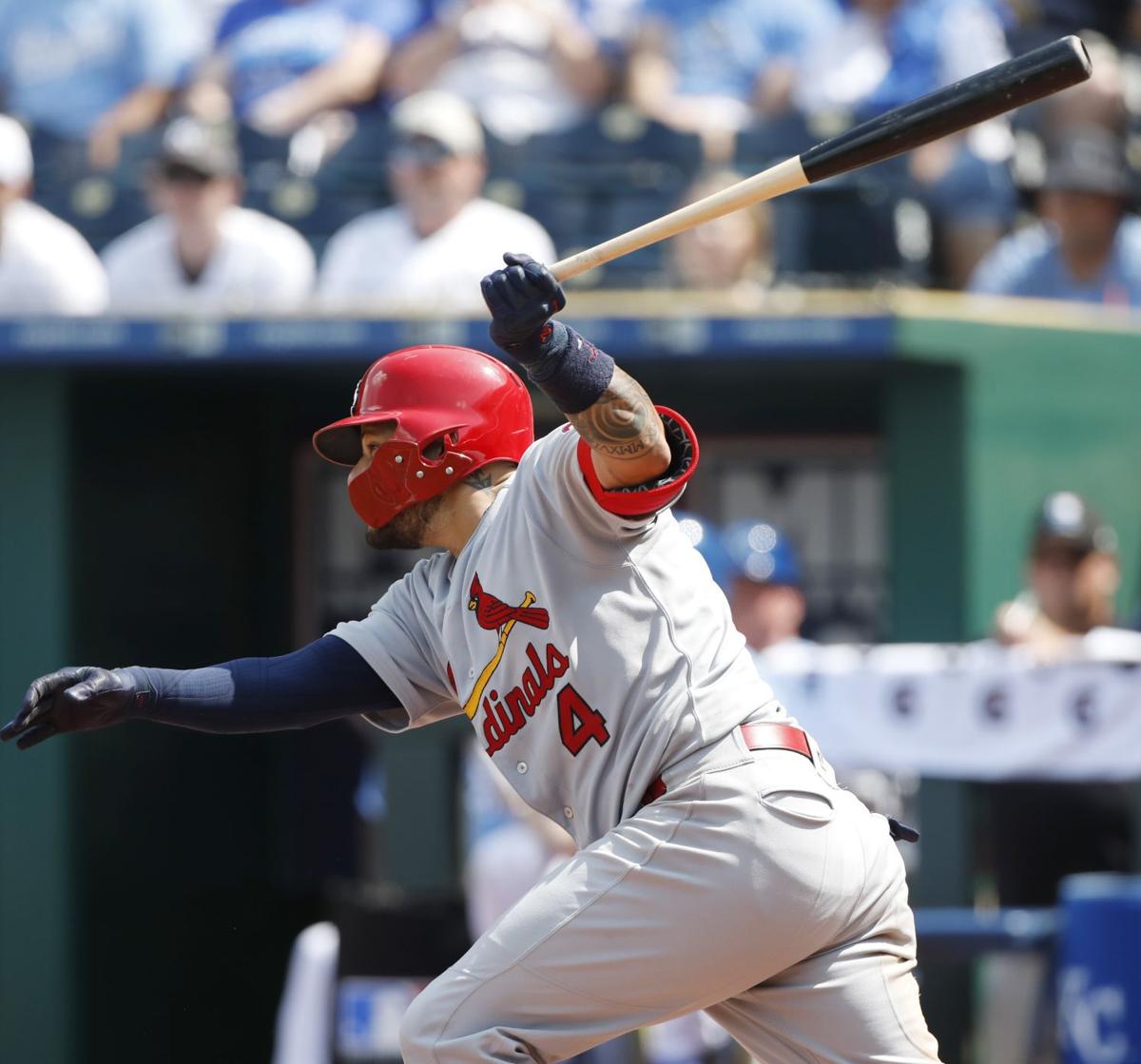 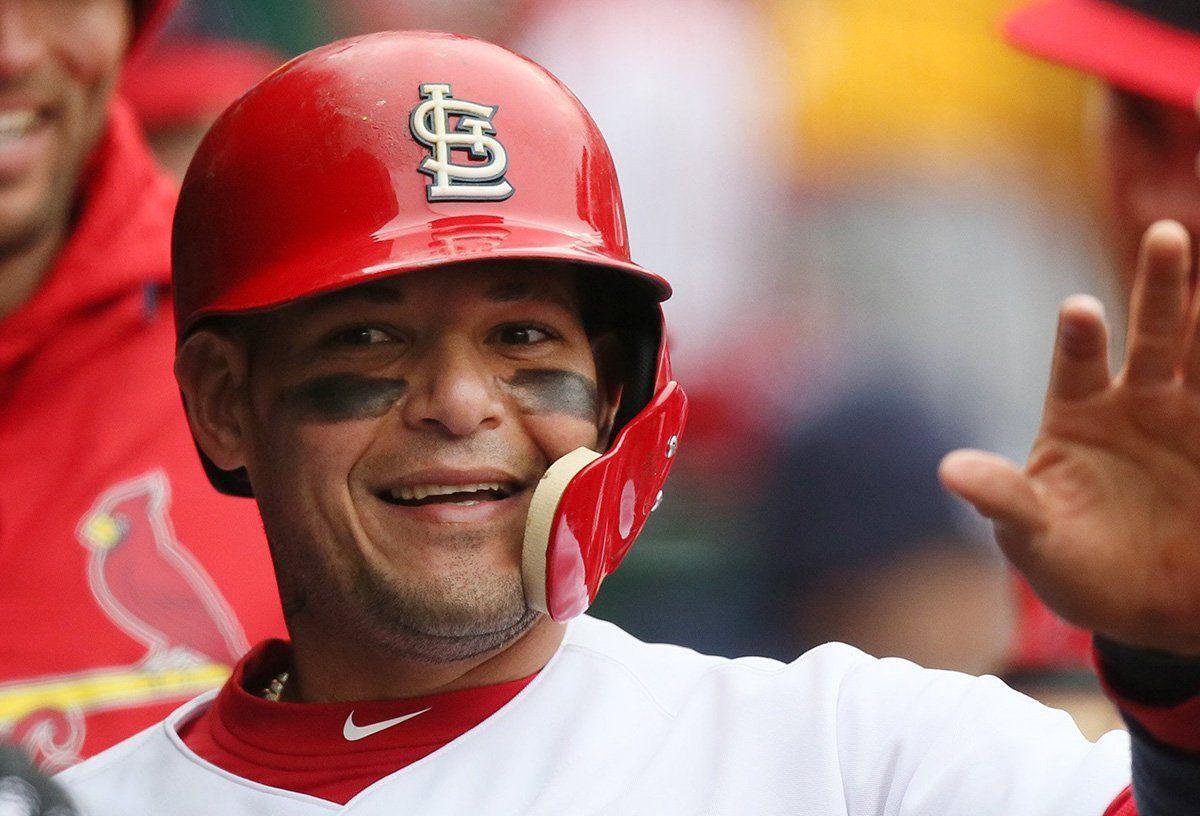 St. Louis Cardinals' Yadier Molina is congratulated by teammates in the dugout after he scored in the fifth inning during a game between the St. Louis Cardinals and the Arizona Diamondbacks on Sunday, April 8, 2018, in St. Louis, Mo. He is wearing the C-Flap protective device. Photo by Chris Lee, clee@post-dispatch.com

KANSAS CITY, Mo. • It took a little longer than usual but the rally arrived all the same Sunday as the Cardinals used two cloudbursts of runs to complete a sweep of the Royals and return home on a five-game winning streak.

Brought up to the majors after an extended minor-league career, Patrick Wisdom tied the game with an RBI single in the seventh inning.

And, in the middle of it all per usual, Yadier Molina broke the tie with a two-run single and set the Cardinals toward a 8-2 thumping of Kansas City at Kauffman Stadium. The Cardinals swept the Royals for the first time in KC since 2012, and more importantly they finished their three-city road trip a far different team than when they started. And not just in personnel. The Cardinals won seven of nine games on the trip, chipped their deficit in the wild-card race down to less than three games.

They even gained ground in the division race.

KC took a 1-0 lead and later a 2-1 lead, and in each case the Cardinals eventually rallied. Molina's two-run single was part of a three-run seventh inning. And in the top of the ninth Marcell Ozuna doubled with two outs and Paul DeJong homered to widen the score. For the second time in as many games, closer Bud Norris warmed up for the ninth -- but didn't pitch it because the offense took away the save situation.

All three runs scored in the ninth were with two outs.

The Cardinals have scored 21 runs with two outs in their previous four games.

Ross, as detailed below, replaced Luke Weaver as the starter with the latter had a cut on his index finger that didn't heal well enough for the Cardinals to feel comfortable pitching him five or more innings. Ross slid in for his Cardinals debut and provided a quality start. The first run off Ross came as a result of a fielding error by Wisdom, and the second run came with two outs only after a fly ball dropped just inside the right-field line.

Ross got his first win with the Cardinals after allowing two runs on four hits and two walks. He struck out four. Ross retired the final nine batters he faced.

The game took an odd turn in the ninth inning when lefty Tyler Webb was ejected from the game after hitting a Royals batter. The Cardinals had been hit four times during the game -- and that didn't seem to elicit any concern from home-plate umpire Adam Hamari. Webb had a two-strike count on Jorge Bonifacio and fired inside on the outfielder, causing him to turn in to the plate and take the pitch to the back.

Hamari ejected Webb as soon as he got around the batter.

Mike Shildt raced out to argue -- colorfully -- and Bud Norris had to come into the game anyway to close it out.

Weaver scratched with cut on his finger, so Cardinals turn to Tyson Ross

The super glue was applied to his finger at some point during the game Saturday night, but by the time the Cardinals had to make a decision Sunday morning it had not held fast enough.

Luke Weaver sliced the index finger on his right (pitching) hand while removing the aluminum foil from a food container during the game Saturday night. The resulting cut did heal in time for him to make his start Sunday, and the Cardinals believed that throwing 90, 100 pitches or so would only cause more damage than to have Weaver skip his scheduled start.

The Cardinals happen to have a starter on standby because of a waiver trade made earlier on this road trip. Ross has not thrown a pitch for the Cardinals since he came to them from San Diego, and the Cardinals had hoped to get him at least an inning Sunday in relief. Now they'll want more than that.

Ross has no issues with the required pitch count or innings as the last time he appeared he was a starter for the Padres. He went 6-9 with a 4.45 ERA in 22 starts for San Diego. He had walked 52 batters and allowed 16 homers in 123 1/3 innings so far this season.

In a season dotted with records, both historic and esoteric, Cardinals catcher Yadier Molina has long since taken ownership of one, and he'll add to it again Sunday with another start at catcher.

With a chance to sweep the Royals and finish a road trip 7-2, Molina will make his 20th consecutive start.

That extends the record he had for consecutive games started by a catcher, age 35 or older division. Molina has appeared in every game managed by Mike Shildt, and he has started all of them but the back half of the doubleheader at Wrigley Field on July 21. Had he started the night cap in that game his record would already be at 20 and this blog likely would have been written yesterday.

Or, not because there was the Patrick Wisdom news.

The rookie corner infielder will make his major-league debut Sunday afternoon against the Royals and start at first base. Matt Carpenter will be at designated hitter, and Jose Martinez moves out to right field, where the Cardinals have had a carousel running throughout this three-city road trip. He becomes the fifth different right fielder the Cardinals have intended to start at the position in the nine games on this tour.

Here is the lineup featuring Molina and Wisdom, as posted at Kauffman Stadium:

Starting at pitcher will be Luke Weaver. He's coming off an impressive turn that may have played a part in Tyson Ross going to the bullpen and Weaver keeping his spot in the rotation. Ross still has yet to pitch for the Cardinals since being acquired in a waiver move from San Diego, and he'll be available today in long or short relief, should Weaver leave any innings unattended.

Check back throughout the day here at StlToday.com and C-Beat for coverage from the 100th PGA Championship and a little ballgame out west.

KANSAS CITY • Although the Cardinals have had three injuries put starting right fielders on the disabled list during this road trip, they had …

When Class AAA Memphis manager Stubby Clapp invited Patrick Wisdom into his office late Friday night and asked the infielder if he needed a day off, he didn’t, in hindsight, make clear where exactly Wisdom would be if he declined the break.

Cardinals have won five consecutive series for the first time since 2015, and in the process started elbowing their way into the wild-card race. The 8-3 win Saturday even cut the Cubs’ division lead over the Cards to 5½ games.

11 years ago, Rick Ankiel made a dramatic return to the majors. Can he do it again?

Here is the original story that was published in the Post-Dispatch on Aug. 10, 2007, the day after Rick Ankiel made a dramatic return to the majors.

With a fifth win in six games and another bite taken off their deficit in the wild-card race, the Cardinals have an opportunity this weekend to turn a reassuring road trip into an assertive one.

St. Louis Cardinals' Yadier Molina is congratulated by teammates in the dugout after he scored in the fifth inning during a game between the St. Louis Cardinals and the Arizona Diamondbacks on Sunday, April 8, 2018, in St. Louis, Mo. He is wearing the C-Flap protective device. Photo by Chris Lee, clee@post-dispatch.com