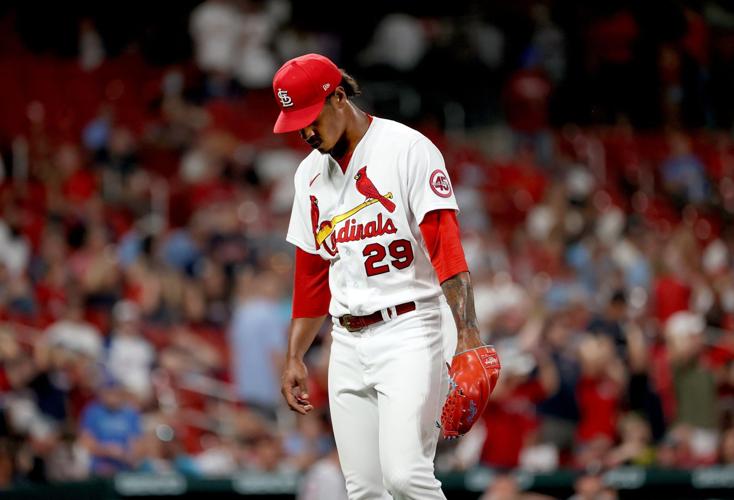 A dejected Alex Reyes walks off the field after being pulled from the game in the eighth inning against the Atlanta Braves at Busch Stadium in St. Louis on Thursday, Aug. 5, 2021. Reyes walked in three runs. 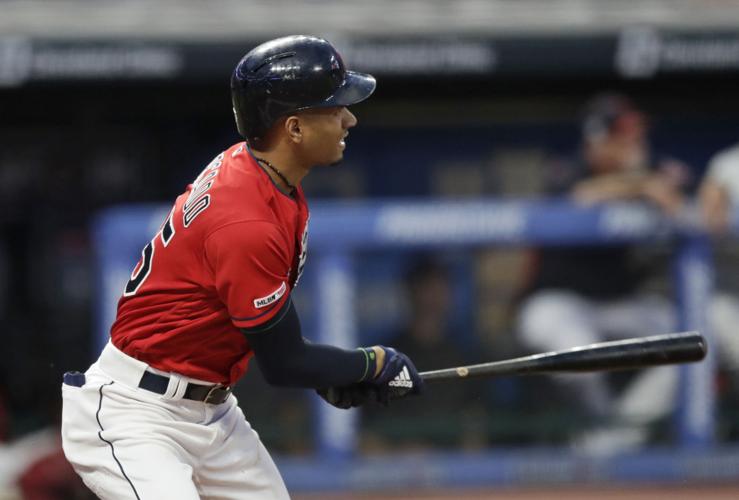 Cleveland's Oscar Mercado watches his RBI double in the first inning of the team's baseball game against the Philadelphia Phillies, Friday, Sept. 20, 2019, in Cleveland.

After years of hoping for lightning to strike again and again from one of the most electric arms they’ve had, the Cardinals allowed Alex Reyes, longtime prospect and one-time All-Star, to become a free agent Friday night after a season lost to another injury.

Reyes and outfielder Ben DeLuzio were not presented contracts for the 2023 season by the Cardinals before Friday night’s deadline, removing them from the team’s 40-man roster and freeing them to sign with other clubs.

A few months removed from being the Cardinals’ All-Star closer, Reyes missed the entire 2022 season with a shoulder injury that required surgery. His current throwing program targets his return to games in May, meaning since his debut in 2016 Reyes has had only one complete season in the majors due to a run of injuries ranging from elbow reconstruction to a broken hand to multiple shoulder surgeries. That weighed heavily into the Cardinals decision not to go through the arbitration process this winter with Reyes and instead make their pitch to him as a free agent without limitations to the type and size of contract they can offer.

“These are rarely easy decisions, especially when you have a long-term relationship with a player,” said John Mozeliak, president of baseball operations. “Alex showed signs of excellence but he also dealt with so many different injuries. We all wish for a different outcome and we are not closing the door; it is ajar.”

The Cardinals did present contracts — “tender” contracts in baseball’s lingo — to all of the other players on the roster without deals in place for 2023. That includes nine players who are arbitration eligible this winter: pitchers Jordan Montgomery, Jordan Hicks and Jack Flaherty, each entering their final year before qualifying for free agency; pitchers Ryan Helsley, Genesis Cabrera and Dakota Hudson; outfielder Tyler O’Neill; infielder Tommy Edman; and catcher Andrew Knizner.

Removing Reyes and DeLuzio from the contract leaves the Cardinals with 37 on their 40-man roster, and still an offseason shopping list that includes a starting catcher and an additional bat for the lineup, possibly a left-handed hitter.

The “non-tender” deadline creates another wave of free agents for the market, and some become intriguing as bounce back candidates. Three years to the date after he won the 2019 National League MVP, Cody Bellinger was non-tendered by the Dodgers. Bellinger, 27, was due a raise from his $17 million salary in 2022, and LA determined that was not palatable given the erosion of Bellinger’s production. A solid center fielder and first baseman, he’s hit .203 with a .648 OPS in his past 295 games.

Reyes, 28, blitzed through the minors with high velocity and a biting curve, once ranking as the top pitching prospect in baseball by both Baseball America and Baseball Prospectus. He had a run of several years as the Cardinals’ No. 1 prospect, and when he debuted in 2016, he swiftly asserted his potential as a power right-hander in whatever role was needed. He struck out 52 in 46 innings that first season — and then a cascade of injuries limited him to seven innings in the majors over the next three seasons.

In 2021, his only full-length and complete season in the majors, he was an All-Star with a 10-8 record, a 3.24 ERA, 29 saves and 95 strikeouts in 72 1/3 innings. He threw the final pitch of that season when the Dodgers eliminated the Cardinals with a walk-off home against Reyes in the wild-card game.

Reyes’ turn as closer escalated his salary to $2.85 million for 2022 and positioned him for free agency after the 2023 season. Due to his injury, his salary would remain the same, or close to it through the arbitration process. The Collective Bargaining Agreement limits how much a salary can drop from one year to the next unless the player is a free agent, so the Cardinals’ salary offer before Friday’s deadline was bound by those rules.

If they had moved on from Reyes earlier in the offseason they could not re-sign him before spring. By waiting until the non-tender deadline, the Cardinals left open the possibility of re-signing their former prized prospect — but they’ll no longer be the only team bidding.

Included in the five minor-league players the Cardinals signed Friday was a highly decorated independent league right-hander and a reunion.

The Cardinals brought back former second-round pick Oscar Mercado on a minor-league deal four years after they traded him to Cleveland. Mercado, who will turn 28 next month, was once a rising shortstop and then center fielder for the Cardinals — his rise hastened at Class AA because of his eagerness and success stealing bases. Mercado gives the Cardinals depth and speed at center field, contributing to the DeLuzio decision to free a roster spot.

The Cardinals also signed Logan Sawyer, who spent three of the past four years in independent leagues and Australia. He has been an All-Star and top reliever at those levels, and this past summer he had 22 saves in 30 appearances with 39 strikeouts in 30 innings.

The Cardinals also signed infielders Taylor Motter and Juniel Querecuto, both of whom have had cameos in the majors, and 24-year-old lefty Kenny Hernandez, who has a 3.90 ERA in 122 games for the Diamondbacks’ organization.

A dejected Alex Reyes walks off the field after being pulled from the game in the eighth inning against the Atlanta Braves at Busch Stadium in St. Louis on Thursday, Aug. 5, 2021. Reyes walked in three runs.

Cleveland's Oscar Mercado watches his RBI double in the first inning of the team's baseball game against the Philadelphia Phillies, Friday, Sept. 20, 2019, in Cleveland.