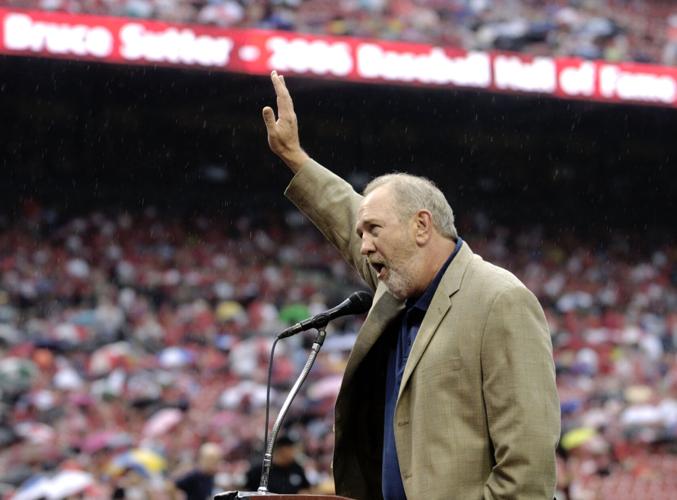 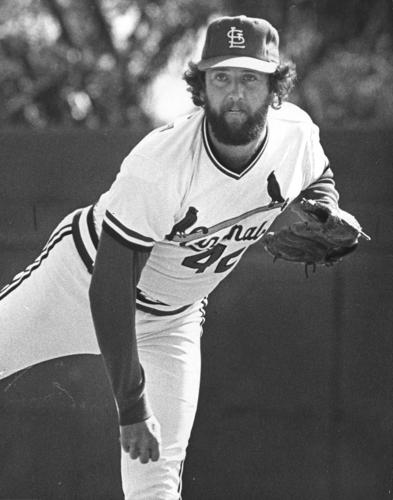 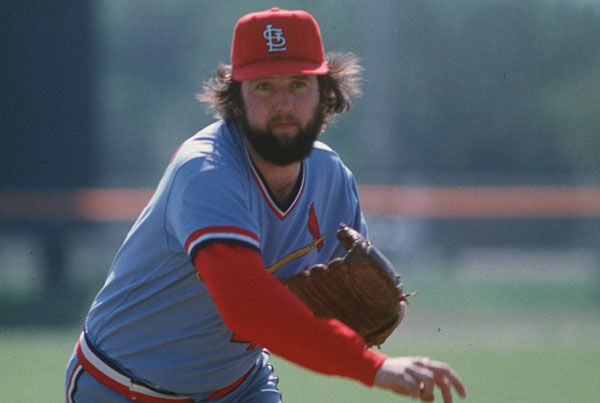 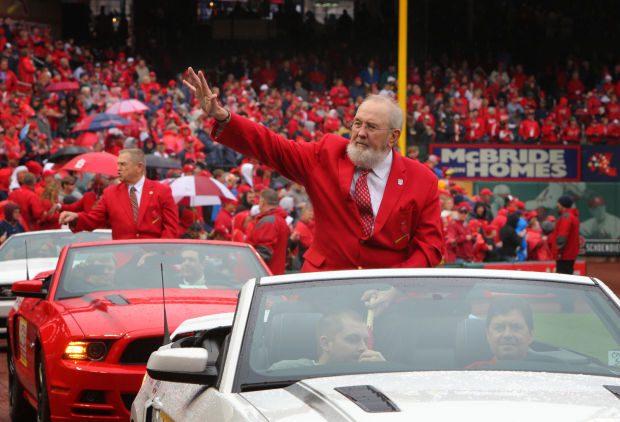 After the passing of Cardinals Hall of Famer Bob Gibson in 2020, there were only three living pitchers who had thrown the final pitch in a winning World Series for the Cardinals. They were Adam Wainwright, Jason Motte and Bruce Sutter.

Now there are only two.

Sutter, who threw the final pitch of the 1982 World Series to clinch the Cardinals’ first championship in 15 years, died at the age of 69 in Cartersville, Georgia late Thursday night after having fought Parkinson’s and then a suddenly developing bout with cancer.

Fellow Hall of Famer Ozzie Smith, the shortstop for the 1982 champions, said, “We knew when we put the ball in Bruce’s hand, there was a 99.9% chance he was going to close it out.”

Sutter, who was the first successful practitioner of the split-fingered pitch, finished his career with 300 saves, 188 of them of more than an inning and 127 with the Cardinals, for whom he pitched for four seasons from 1981-84.

“He was just a great guy to be around,” said Smith. “Had a great sense of humor. And he made all of our jobs a lot easier.”

After his playing days were over, Sutter tended to his wife, Jayme, who has had four cancer operations, in addition to dealing with his own declining health. Jayme, sons Josh, Chad and Ben and six grandchildren survive.

“A lot of people see us in our glory and in our heyday,” said Smith, “but Bruce had a lot of adversity away from the field. As a teammate, you always feel for people for the other things that we have to deal with.”

Sutter also fell and suffered a broken arm, resulting in nerve damage, this past summer, which kept him away in August from the 40th reunion of the 1982 champions.

“It’s a sad day for Cardinal Nation,” said Smith. “It seems like we’re having more and more of these types of days.”

Former Cardinals teammate and Hall of Famer Jim Kaat said, “Bruce was in a lot of pain those last few months.”

But Chad Sutter said his dad had died peacefully, on Thursday night. Private services are scheduled for Wednesday in Georgia.

Howard Bruce Sutter, acquired from the Chicago Cubs after the 1980 season, was elected to the National Baseball Hall of Fame in 2006. He was the first player to be selected to the Hall without ever having started a game as a pitcher.

Sutter, ironically, didn’t throw his famed split-fingered pitch when he struck out Milwaukee slugger Gorman Thomas to end Game 7 of the 1982 Series. It was a high fastball — not all that fast — that surprised Thomas.

Smith, from his infield position, recalls seeing the fastball sign from catcher Darrell Porter. Knowing that Sutter’s fastball was in the mid-80s on a good day, Smith recalled saying to himself, “Be careful.”

Thomas swung through the fastball that Smith judged to be “maybe 84 (miles an hour).” The Cardinals were World Series champions for the first time since Gibson closed out Boston in Fenway Park in 1967.

“The first thing I wanted to do was get me an outstanding closer,” said Herzog. “I did not know if Kennedy was going to get me Sutter. So, I had a chance to get Fingers because (Padres general manager) Jack McKeon wanted Kennedy. And then we got Sutter.”

On the third day, Herzog met with Fingers, who was in Dallas to receive his Fireman of the Year award.

He said Fingers told him, “We (he and Sutter) can work together. We won’t have any trouble.”

Then Herzog responded, posing a question to Fingers. “Point blank, if the tying run is on second base or the winning run is on second base, two outs in the ninth inning with a left-handed hitter at the plate and a left-handed hitter following ... if I take you out of the game and have Sutter pitch to the left-hander with his split-finger instead of the slider that you’re going to throw him ... would you be mad?” asked Herzog.

On the fourth day, Fingers was on his way to Milwaukee, which he would help to the American League pennant in 1982, but he couldn’t oppose Sutter in the World Series because of an injury.

Sutter had his best season with the Cardinals with 45 saves in 1984 when he had a 1.54 earned run average, and after the season, he signed a $9.1 million, six-year contract with Atlanta with enough money deferred into an annuity that would pay him $1.3 million a year for 30 years after he retired.

“I just got 45 games dumber,” said Hall of Famer Herzog, who then invented “bullpen by committee” the next year when the Cardinals returned to the World Series.

Sutter came to Herzog one night during the 1984 winter meetings in Atlanta, told Herzog about the offer the Braves had made but said that he wanted to stay with the Cardinals. He wanted a partial no-trade contract and that Herzog could draw up the list of teams.

Herzog said that idea was nixed by August Busch III, who was in charge of the Anheuser-Busch brewery and the club at that point.

“That’s when I heard that Anheuser-Busch didn’t really give a damn about winning,” said Herzog. “Little August hated baseball and didn’t want to pay him any money. So, Sutter’s gone.

“To me, Bruce is the best there ever was,” Herzog said. “From my time in the big leagues from 1956 until I retired (as manager) in 1990, the most dominant relief pitcher I’d ever seen was Sutter.

As it turned out, Sutter’s shoulder went bad and he rarely was effective for the Braves.

Sutter, a six-time All-Star, won the 1979 Cy Young Award while pitching for the Cubs, but he entered the Hall wearing a Cardinals cap on his plaque. He worked more than one inning for 188 of his saves and his No. 42 was retired by the Cardinals, who already had done so for Jackie Robinson, as had all other teams, but the Cardinals wanted to make sure Sutter was honored similarly.

“He was amazing,” Herzog said. “Everybody knew what he was going to throw. And he wasn’t known to throw strikes, but I never remember him walking in a run. Some way he got them out.

“And the other managers were sending rookies up there to hit. It was like taking candy from a baby.”

Cardinals Hall of Famer Tom Herr, the second baseman on the 1982 World Series champions, recalls Sutter as a pitcher in Lancaster County in Pennsylvania.

“I grew up watching Bruce play American Legion ball, so I was a fan of Bruce’s before I ever became a teammate of his,” Herr said. “He was a conventional fastball, curveball pitcher back then.”

The Cubs signed Sutter in 1972, but after only two games at the rookie level, he suffered a pinched nerve in his elbow. He returned to Lancaster and worked in a plant that did the printing for cigar boxes and had elbow surgery at his own expense. He didn’t tell the Cubs, because he was afraid they would release him.

But when he came to camp the next year, he discovered he had no fastball.

Sutter spent 1973 with the Quincy Cubs of the Class A Midwest League and came into contact with minor league pitching coach Fred Martin, who suggested Sutter take advantage of his large hands and try to throw the split-fingered pitch, which could take its toll on pitchers.

“When he threw 40 pitches in a game, which he did a few times, his thumb was so sore he couldn’t pitch the next day,” Herzog said. “You could hear it pop on the bench, when he threw the damned thing.”

Sutter didn’t master it at first, prompting Quincy manager Walt Dixon to report to the Cubs’ player development staff, “When Bruce Sutter is ready for the big leagues, that’s the day the Communists take over.”

Kaat went into the Hall this July, and Sutter, though ailing, made the trek to see him.

“He was as close a teammate as a friend as I probably ever had. It was a privilege to be his friend,” Kaat said.

Herr said that one of Sutter’s best qualities was that “he had a unique way to stay calm and keep all other guys around him calm and confident.”

This reporter can attest to that. On the day the reporter was to receive a Hall of Fame writing award at Cooperstown, New York, in 2007, he prepared to get onto the bus to take the (real) Hall of Famers and a couple of other folks to the ceremony.

Sutter got on ahead of the nervous reporter and patted the seat adjacent to his. “You’re sittin’ next to me,” he commanded.

The ride took about 15 minutes. Sutter did all the talking. And when the destination was reached, everything, indeed, was calm.

2016: The clouds part for Opening Day in St. Louis 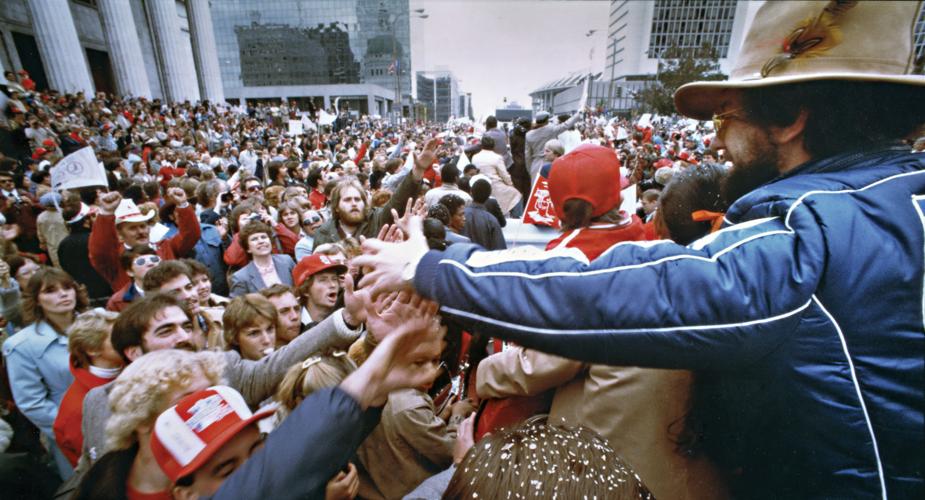 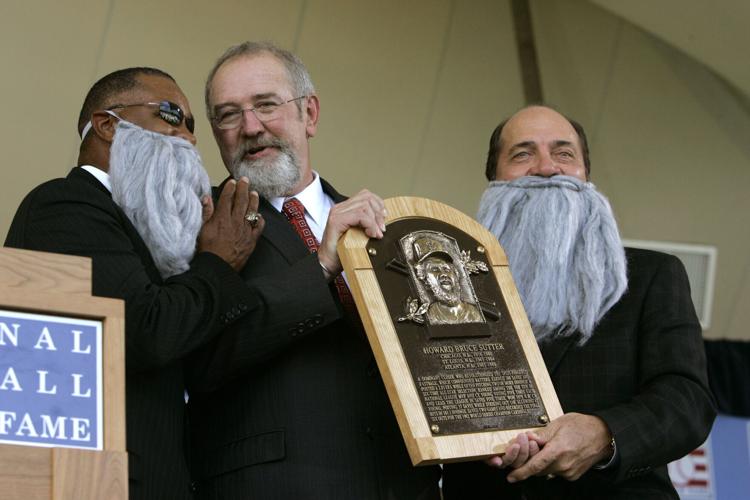 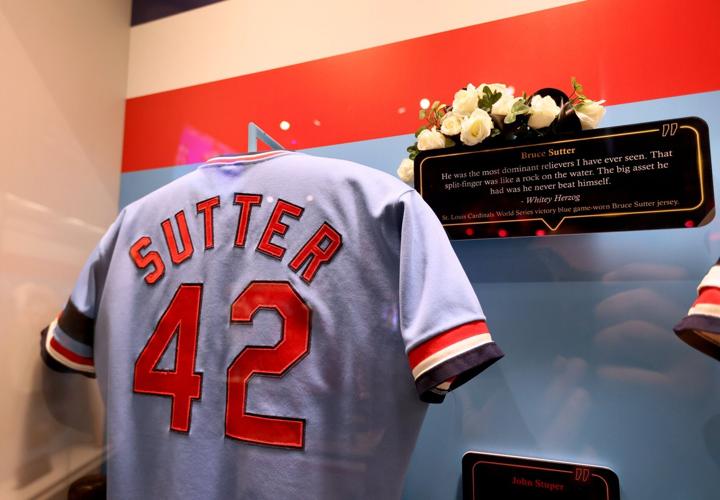 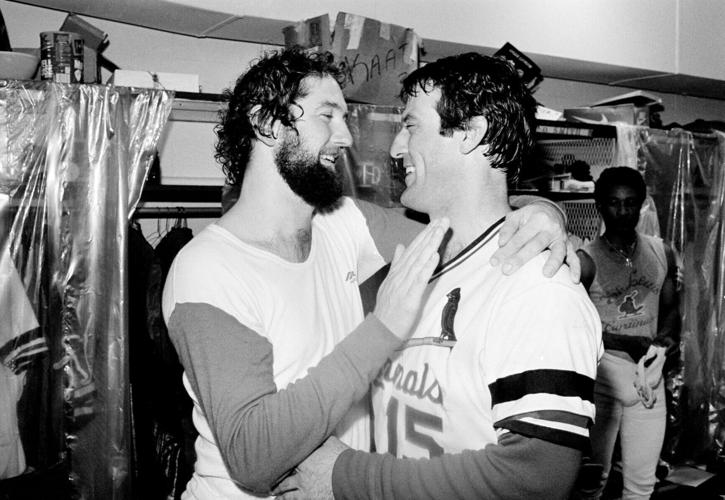 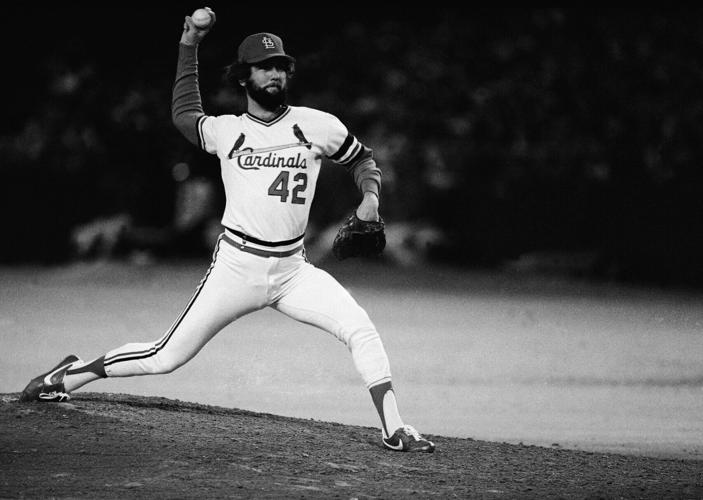 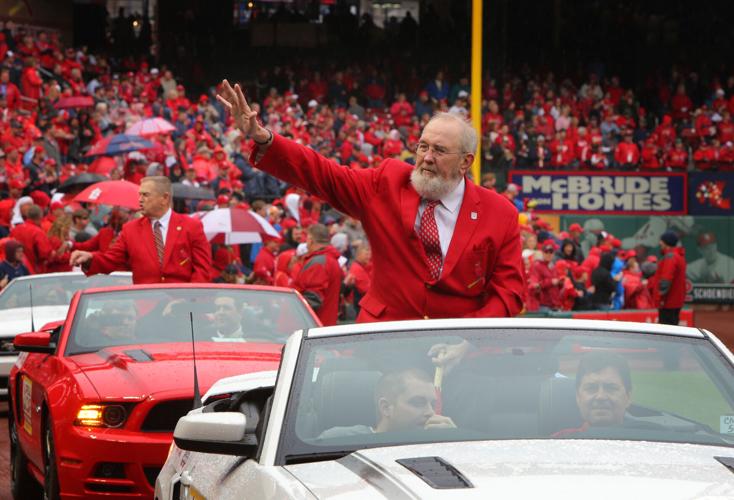 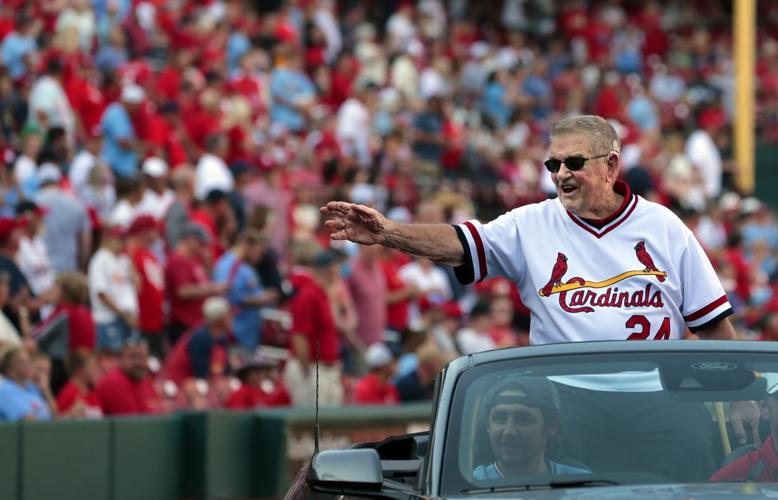 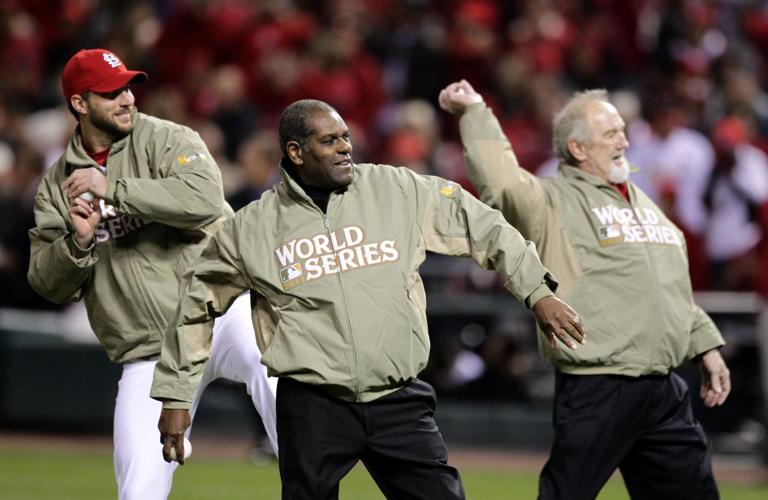