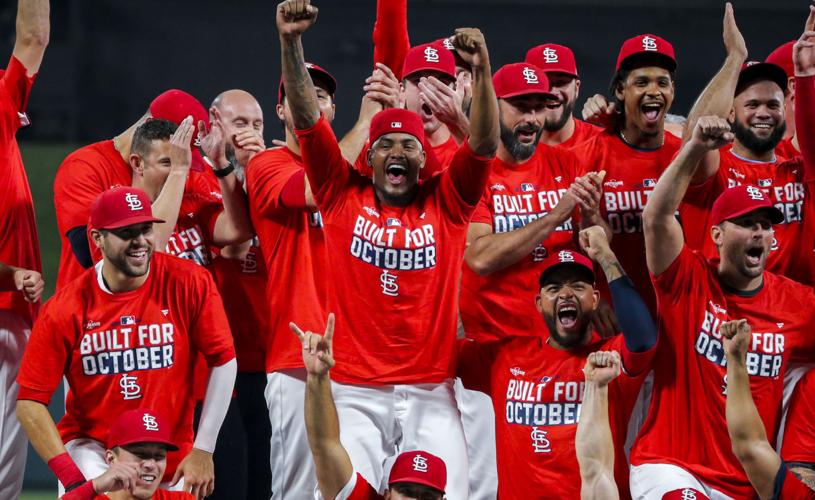 Relief pitcher Genesis Cabrera, center, and teammates celebrate after the Cardinals clinched a wild-card playoff spot in 2021 by beating Milwaukee 6-2 on Sept. 28, at Busch Stadium. It was their 17th consecutive victory. 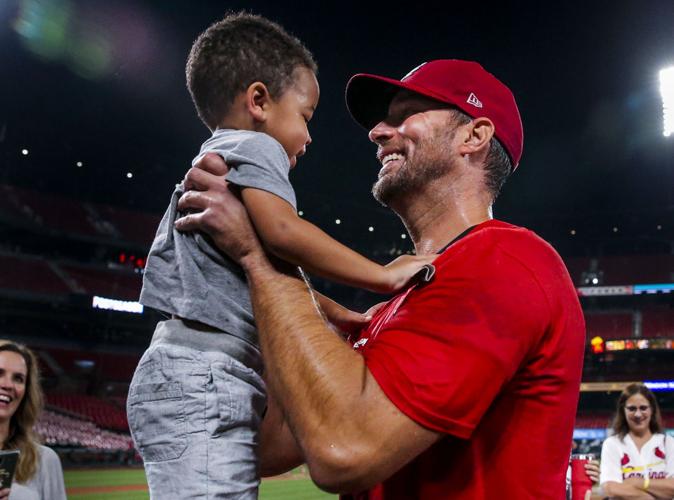 MILWAUKEE — There came a point in some tucked away visiting manager’s office last week in California when Oliver Marmol stopped a series of questions about resting regulars, juggling lefty relievers and auditioning rookies such as Alec Burleson.

He felt the need to point out the standings, and not just to the questioners.

“I feel like people think we’ve clinched, and we haven’t,” Marmol, the Cardinals’ manager, said. “I get it. But we’re not there yet.”

But they could be soon.

Champagne, beer, ice, and officially licensed merchandise will be in the building Tuesday night as the first-place Cardinals visit the team chasing them, the Milwaukee Brewers. With a win in either of the two games this week at American Family Field, the Cardinals will clinch their second National League Central championship since 2015. A win gives the Cardinals the season series against the Brewers and, thus, the tiebreaker for the division title and the No. 3 seed for the National League playoffs.

Major League Baseball confirmed that although the Cardinals’ magic number technically is three, a single head-to-head win against the Brewers will assure the division title. Of course, two wins by Milwaukee and the tiebreaker flips. The champagne chills.

“That is competition, right?” Marmol asked. “You get to go against the team that’s chasing you and put them away. We welcome that. That is the first goal. Beat everybody in your division. Be the best team in your division. And then be the last team standing.”

The Cardinals hold a 6½-game lead on the Brewers with eight games remaining in the regular season. That is as close as the division race has been since the start of September. The Cardinals woke up on the morning of July 31 trailing the Brewers by four games. In the next 17 games, the Cardinals went 14-3 and by August 19th they flipped the division, taking a four-game lead and widening it.

“We knew that once it was back at zero and we took the lead,” Marmol said, “we weren’t going to look back.”

They did, however, look ahead as they considered how to approach this two-game finale against the Brewers. Over the weekend at Dodger Stadium, the Cardinals elected to reset their rotation. They’re going to nudge back Jack Flaherty’s start to get lefty Jose Quintana, their most effective pitcher in recent weeks, a start against the Brewers on Wednesday. Milwaukee is one of the teams that struggles most against left-handed pitching. Miles Mikolas will start Tuesday, making his fifth appearance against the division rivals and third start in Milwaukee.

He has a 2.08 ERA at American Family Field this season in 13 innings.

Mikolas and Quintana also are being positioned for the starting assignments the Cardinals’ will take into a first-round, best-of-three playoff series, should they qualify.

The undercurrent of the trip has been how the roster is shifting, how the rotation is changing, and how the bullpen will look for the postseason. That was the conversation that Marmol wanted to adjust. While the Cardinals are trying to answer questions about the playoffs — will Genesis Cabrera pitch his way into the mix from Class AAA? Can Adam Wainwright snap out of a “dead arm” phase with one start remaining? — they have lost five of seven. They have encountered some speed bumps, particularly offensively.

That puts the priorities of the season’s final week in perspective.

Winning the NL Central championship was the first goal the Cardinals’ articulated as far back as spring training, and Marmol said last weekend that the division crown is a measure of the marathon — how a team stuck to its commitment through the entirety of the season. It’s a trophy that isn’t as high as the World Series title, but that doesn’t mean it lacks gravity.

“I think when you look at the season and you measure how good a team is by the season, it’s 162 (games), and when it’s all said and done if you won the division you were the best team in that division,” Marmol said. “In those three-, five-game series anything can happen. But talk about actually having a goal, committing to a process, I’d like to measure our success over the 162. When you get into the playoffs, regular season no longer matters and you just go at it. See what happens.”

This trip that pits the Cardinals against three potential playoff teams, including the 106-win Dodgers, has revealed a lineup reliant on power — and how it can be unplugged.

The Cardinals’ began their West Coast swing through San Diego by being shut out on consecutive nights and the continuation of a 42-inning stretch without an RBI. The Cardinals failed to score an earned run in four games.

When they finally broke that scoreless streak, fittingly, a home run did it. Lars Nootbaar released the tension with a solo homer, and rookie Brendan Donovan followed in that same game in San Diego with a grand slam. The Cardinals scored 18 runs in a three-game burst, including 11 on Friday night at Dodger Stadium as Albert Pujols drilled career homers Nos. 699 and 700. He shared the National League’s Player of the Week award with Mets slugger Pete Alonso.

Pujols’ two homers provided five of the Cardinals’ 11 runs that night, and of the 18 runs in that three-game jubilee, 16 came on home runs.

All but three of their runs on the trip have come from home runs.

“I think the ‘Noot’ homer — that’s what you’re waiting for,” Marmol said. “The reality of how we’ve scored runs is that we’ve done damage. We’ve hit doubles. We’ve hit homers. We take our walks. We have to continue to hit the ball hard and far. ‘Noot’ hit that homer and the grand slam by Donovan were really big swings that give that dugout energy as far as who we are and the identity of what we do.”

Nootbaar and Pujols lead the team with two homers each on the trip, and four others have one. Not on that list is Paul Goldschmidt.

Still a favorite to win the National League’s MVP award, the Cardinals’ first baseman has two home runs in his past 97 at-bats. His slugging percentage in that span is .340, barely above his on-base percentage of .333 for the same 27-game stretch. The offense has won two games with power, but sustained offense radiates from two middle-order hitters such as Goldschmidt and Nolan Arenado and a variety of ways to score runs. That’s the October way.

“Fortunately, it is a team game,” Goldschmidt said after the Cardinals managed a run Sunday in a 4-1 loss to Los Angeles. It scored on a single. “I haven’t played well, (but) we’ve had a lot of other guys play well. ‘Donny’ had that big grand slam. Albert had a couple of homers. Other guys have done well. That makes it nice that it’s not just one person. If I can play better then I think our team will benefit and player better as a group and win some more games.”

There would be delicious symmetry to the Cardinals closing out the division title at Milwaukee, and it’s not lost on the clubhouse.

Since the Cardinals won three consecutive division titles from 2013-2015, the same three teams have alternated as division champs, and they often have done so at the immediate expense of one of the other two.

That loss? To the Brewers.

This year’s schedule, set more than a year in advance, but revised immediately after the lockout lifted all those months ago, gives Milwaukee’s club two chances to personally stop the Cardinals from celebrating in its house. The schedule gives the Cardinals six more games to further adjust their rotation, evaluate relievers, deploy rookies or give regulars a break.

“I’d like to clinch and then we can talk about the rest,” Marmol said.

The champagne, reserved and label for its moment, will be waiting.

And it’s a pain to repack.

Hochman: Who should the Cardinals start in the first three playoff games?

Relief pitcher Genesis Cabrera, center, and teammates celebrate after the Cardinals clinched a wild-card playoff spot in 2021 by beating Milwaukee 6-2 on Sept. 28, at Busch Stadium. It was their 17th consecutive victory.