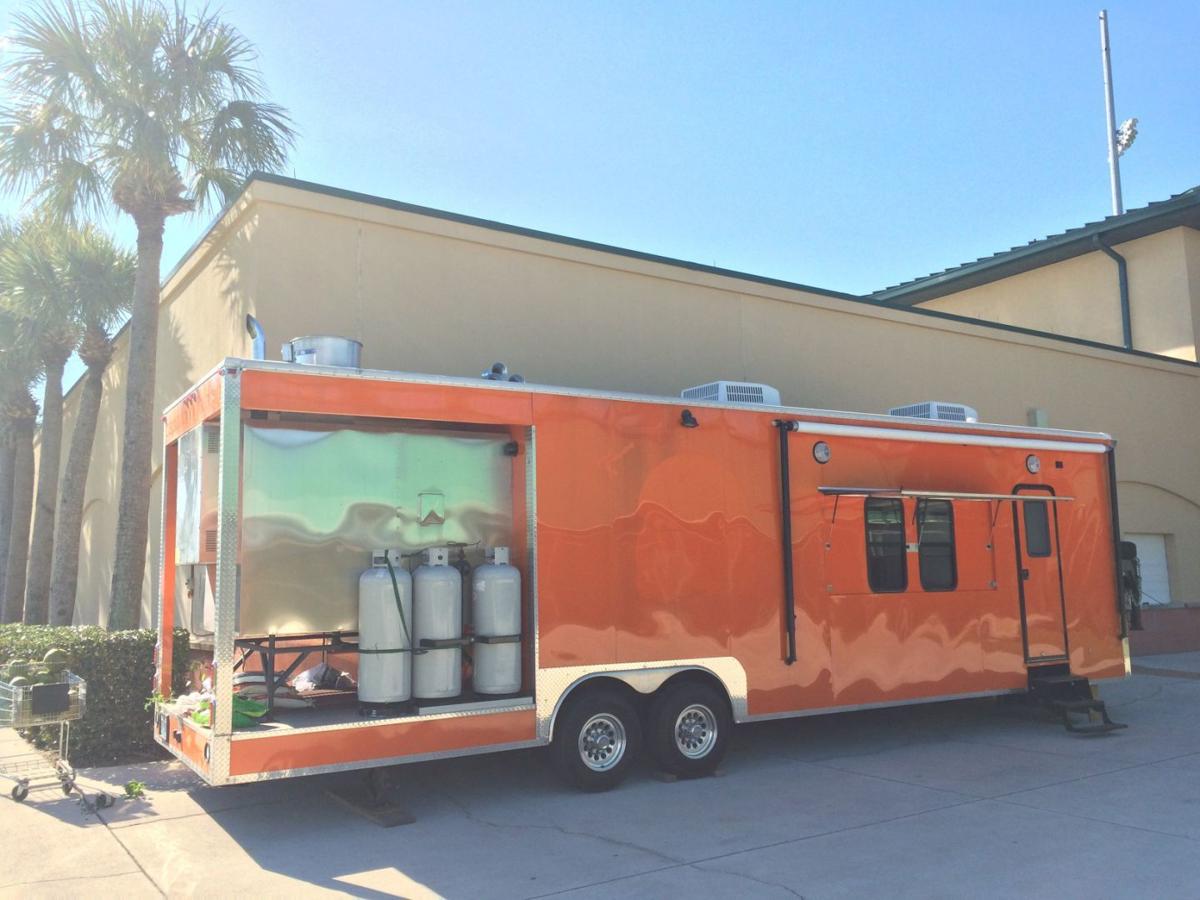 The Cardinals have rented this 40-foot long commercial cooking trailer for spring training to give team chef Simon Lusky and a new hire more room and better facilities. The truck has a 25-foot kitchen and a 12-shelf smoker. it was built for barbecue competitions and is being leased to the Cardinals. Derrick Goold, dgoold@post-dispatch.com 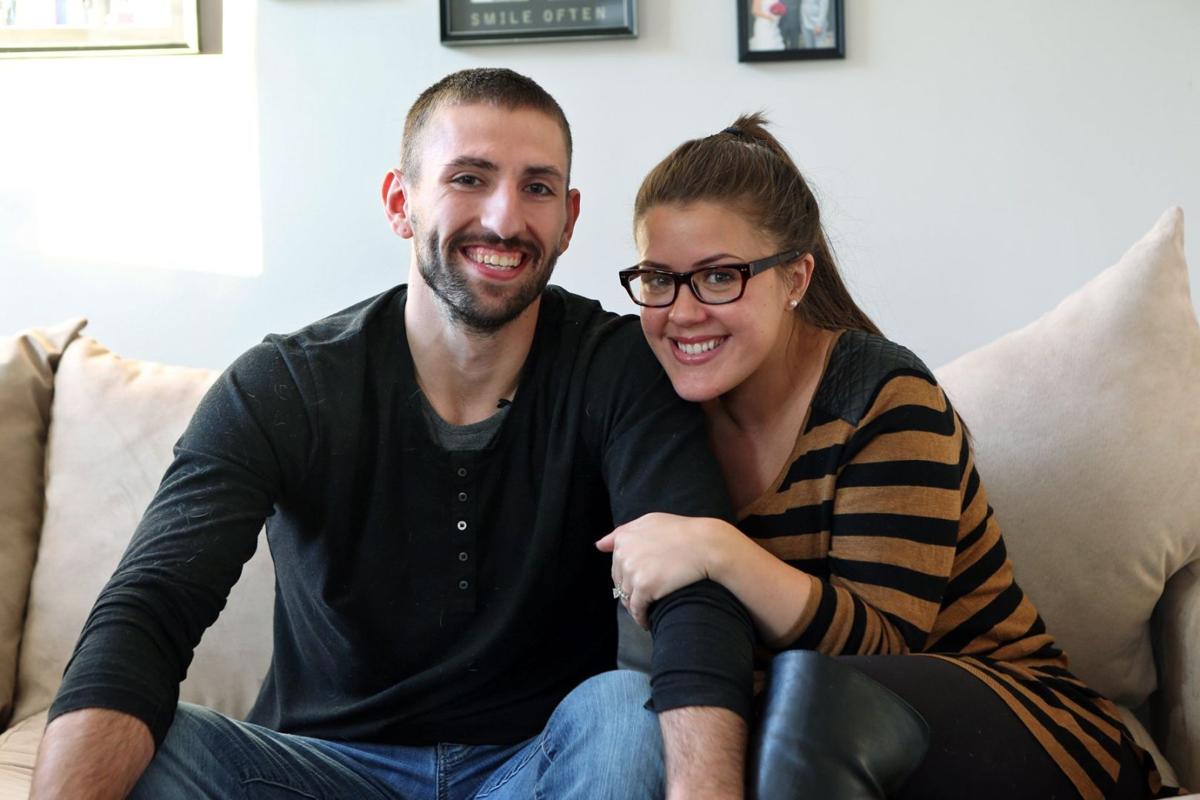 Simon and Angelica Lusky pose for a photo in their Fox Park neighborhood home. Photo by J.B. Forbes, jforbes@post-dispatch.com

JUPITER, Fla. • The Cardinals’ biggest acquisition of the offseason can really bring the heat, will provide power daily for the team, has a wide, balanced stance, and was impossible to miss as players and staff began arriving this past week.

All that, and it hasn’t even started cooking yet.

Parked on the concrete walkway between the Cardinals’ clubhouse and the batting cages is a 40-foot long, Tennessee-orange commercial cooking trailer.

This muscle car of food trucks has 25 feet of cooking space and a built-in, 12-shelf Ole Hickory Pits barbecue smoker. The trailer is geared for barbecue competitions, but the Cardinals have leased it this spring and handed the keys to team chef Simon Lusky. It’s their latest advancement in what’s become a nutrition mission.

“You know baseball — it’s constantly a proving process,” Lusky said Sunday while giving a tour of his new toy. “You show them and you show them and now everybody, top to bottom, believes in the food. Having good food and healthy food is valuable to the process. Everyone now sees the power of the food.”

This spring training, which begins Friday with the first official workout for pitchers and catchers, will be Lusky’s fifth with the Cardinals. In that time, the club has removed soda from the clubhouse, swapped bags of chips for nutritious nuts and made healthy food a focus. The expansion of the team’s nutrition, spearheaded by general manager John Mozeliak and strength coach Pete Prinzi, can be measured by Lusky’s cooking space.

That first year he was wedged into a corner of the clubhouse, where ventilation was tricky. If he wanted to cook made-to-order omelets for the players, he had to do it from a mobile station. Last year, he was outside of the clubhouse under a rent-a-tent. He was, quite literally, cooking in the elements and had to drape awnings on the side of the tent to keep in the warmth or keep out the wind.

This spring, he’s got a top-tier smoker once used by Captain Hog’s.

“We’re going to see how it works out,” Lusky said.

The trailer is the largest but not the only addition for Lusky this spring. The Cardinals have hired another chef to assist Lusky. The new chef is a nutritionist as well, is fluent in Spanish and brings some Cuban recipes to the mix. Improvements are being made back at Busch Stadium to Lusky’s kitchen there — upgrades both for safety and sanitary reasons, and a walk-in refrigerator is being considered. At the team’s complex in Jupiter, right under Roger Dean Stadium’s large scoreboard, Lusky has a garden growing. He has five storage tubs filled with dirt and a watering system pulled from Pinterest to grow herbs. On Sunday, he was painting five buckets, readying them to house tomato and pepper plants. If he gets the OK, those will hang off the scoreboard “because the sun is the best there,” Lusky said.

Pitcher Adam Wainwright, who cultivated a green thumb as he recovered from elbow surgery in 2011, has helped Lusky set up the ballpark garden. His family decorated the tubs and he has checked the dirt to make sure the plants are getting enough water.

Involvement and interest is part of selling nutrition, Lusky said.

“I love it that the young guys are seeing this because they ask questions, they get to see it grow, they get to pick it if they want, and they have a connection with the food,” Lusky said. “I think it’s important that they see me here, watch me cook it, and they can also see how it’s healthy. They’re not just waiting for it to eat it. This is a cooler way for them to see it. If they see it then they can believe in it and how it works for them.”

It was six years ago that catcher Yadier Molina came to spring training having lost weight because he hired a nutritionist. Soon after, candy bars, grab-and-go sandwiches and sugary cereal were removed from the clubhouse. Mozeliak championed a greener, leaner kitchen.

Lusky graduated with a culinary degree and Bachelor’s of Science in nutrition from Johnson & Wales in 2010, and he started with the Cardinals as an intern. He was in that proving process. Lusky was the team chef who lived with Lance Lynn for a stretch several offseasons ago to help the pitcher drop more than 40 pounds. Lusky did the same with first baseman Matt Adams, helping his whole family learn how to eat leaner. Lusky has set the menus for what’s become some clubhouse favorites — like the beef tenderloin he serves once a homestand or the meatballs made of veal, pork, and beef. He serves them baseball-sized, of course.

During spring, he has to cook for numbers.

He plots a menu based on where the team is in its spring schedule, matching nutrition to work and time spent at the ballpark.

When games arrive, so do meatier meals. They go through a lot of eggs — “I crack each one,” the chef said — and bacon, like sweet potato hash, is made in-house. What the team calls “Fat Friday” allows one day for treats, like pastries.

Each spring a new must-eat trend develops. Last year it was kale.

“I think barbecue is going to be the style this year,” Lusky said.

The Hog’s logo on the orange trailer that had a pig captaining a motorboat has been removed, and the Cardinals are leasing the trailer from Paddy O’s owner Chris Dorr, Lusky said. But its goodies remained unchanged. There are two windows under a popup awning where players can request food, food truck-style. The smoker has a foot pedal that swings the shelves around, and an arm’s reach away is what chefs call a “CVap,” where temperature and humidity can automatically regulate to keep ribs juicy or veggies crisp. And the trailer has two fryers – something usually associated with food now deleted from the Cardinals diet.

Lusky has researched how to use fryers with health in mind and intends to use sunflower oil and avocado oil. He’s enlisted help from St. Louis’ Strange Donuts to help cook up a recipe for a “healthier doughnut that hits that sweet spot.” The next few days will be spent organizing the food he’s ordered, choreographing moves within the trailer with his new colleague, and, of course, experimenting with his improved kitchen.

The Cardinals’ hulking newcomer, like the team, officially warms up Friday.

“First time for me using something of this magnitude,” Lusky said. “I can’t wait to start playing.”

Carlos Martinez, who has a chance to win the club's fifth starter job, arrived to find catcher Yadier Molina had moved his locker. Also: More than 20 players in camp.

New locker, new number, new outlook for the 23-year-old pitcher that the club hopes will seize a rotation spot.

Siegrist, Gast have a different feel this spring

High-voltage reliever Siegrist arrives with injuries behind him; prospect Gast feels his shoulder is ready now to 'let it go.'

On the eve of the official reporting date, more Cardinals pitchers are in Jupiter than aren't. Molina's mentoring of Martinez took the field today during informal bullpen sessions.

10 questions about the 2015 Cardinals

Can Wacha and Waino stay healthy? Will Carpenter move down in the order? Is Martinez ready for the rotation? Baseball writer Derrick Goold zer…

Cards camp: A quiet before the storm

The last weekend before camp officially opens brings players to the yard — and gets one annual event of spring out of the way earlier than ever.

Wacha ready to show off progress

Cardinals righthander, who had last season interrupted by a stress reaction in his right shoulder, threw off the mound Friday and flaunted his health.

Tate Matheny, a center fielder at Missouri State and a preseason All-American, again will be eligible for MLB's draft this summer.

After leaving St. Louis sports radio, ‘Real Housewives’ reportedly is next for former Cardinal and especially his wife.

Bernie: 5 variables that could help or hinder Cardinals

In today's video, Bernie Miklasz spells out 5 variables that could have a big impact on the Cards in 2015, from Martinez's maturity to Matheny…

The Cardinals have rented this 40-foot long commercial cooking trailer for spring training to give team chef Simon Lusky and a new hire more room and better facilities. The truck has a 25-foot kitchen and a 12-shelf smoker. it was built for barbecue competitions and is being leased to the Cardinals. Derrick Goold, dgoold@post-dispatch.com

Simon and Angelica Lusky pose for a photo in their Fox Park neighborhood home. Photo by J.B. Forbes, jforbes@post-dispatch.com