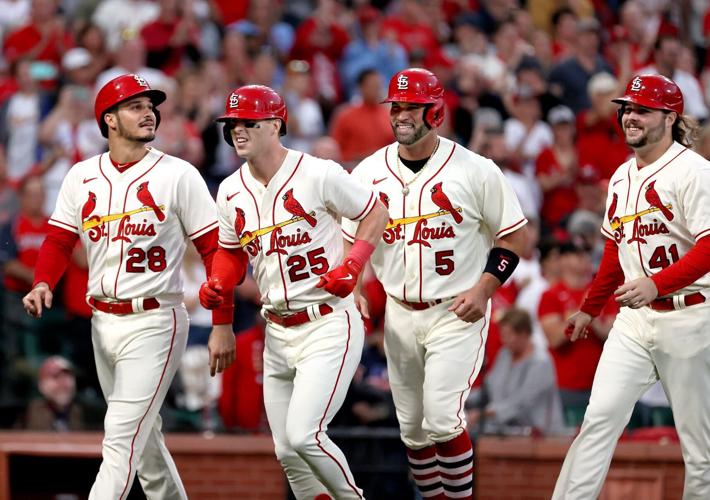 St. Louis Cardinals Nolan Arenado, Corey Dickerson, Albert Pujols and Alec Burleson walk back to the dugout after Dickerson smashed a grand slam in the first inning during a game between the Pittsburgh Pirates and St. Louis Cardinals at Busch Stadium on Saturday, Oct. 1, 2022. Photo by David Carson, dcarson@post-dispatch.com 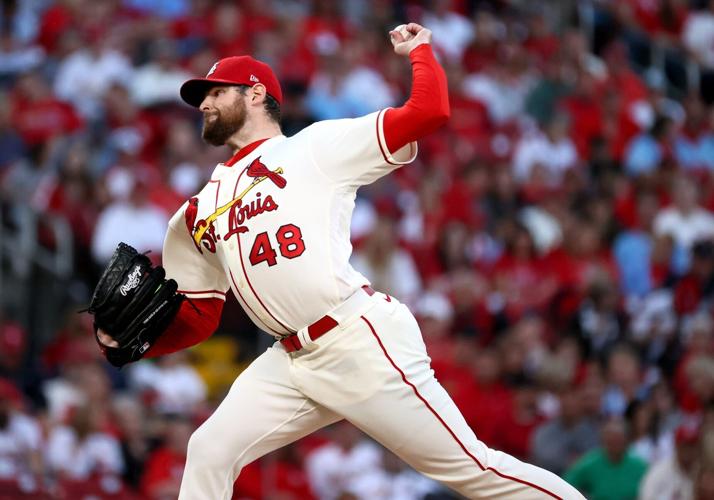 The 433-foot grand slam Corey Dickerson unloaded to right center field in the Cardinals’ first inning Saturday night was not his first October home run. He had homered a year ago to the day when he played for Toronto, cracking his sixth homer of the season to deep right against Baltimore.

“Almost killed a guy,” said Dickerson late Saturday. And so did this one, which hit a man in the eye before he corralled the ball in the bleachers.

This home run, also Dickerson’s sixth of the season, capped a six-run first inning in a 13-3 win over Pittsburgh and came on his son Davis’ eighth birthday. This means that on Davis’ seventh birthday, his dad also had homered and his father promised the same this year, with the grand slam even a better one than his solo drive of last year.

“I said, ‘You need to have more birthdays,” joked Dickerson.

“But he kind of shoots me off. He thinks what I do is easy because he hits like .900 in his league. He compares that to me. He gives me a hard time.

“He had a tournament today (the family lives in Mississippi) and they won, so that was kind of a cool thing for me.”

But the 33-year-old Dickerson has also hit one more memorable October homer. In Game 1 of the wild-card series between his Miami Marlins and the Chicago Cubs in 2020, Dickerson’s three-run homer won the game 3-1 and the Marlins finished off the Cubs the next day before losing in the division series round to Atlanta.

Somehow, Dickerson, one of the best contact hitters on the club, went nothing for 26 in a September stretch.

“You’ve got to find a way to persevere. It builds character.”

“I’m trying to drive the ball and not spread out and try to poke the ball around.

“I could do that (and he has) if I wanted but that’s not really going to be a good attribute to the team. There’s a time for that but why would I do that right now?”

The homer Saturday was one of Dickerson’s strongest moments of an up-and-down season. He was hurt. He rode the bench. He had 10 hits in succession against the Chicago Cubs.

“Sometimes it’s like a relief,” he said. “You not only want to be a guy who drives in a run but to do that this close to the postseason kind of gets your confidence going, a little 'swaggy' or whatever. It just feels good to do it—that you can help the team in a drastic way whenever the time might be.

“I feel like I was missing something, so there’s been a lot of cage work the last couple of days. It's always nice when it clicks because you immediately have got confidence. You can remember what you did or that feeling off the bat. You can carry those things over.”

Dickerson’s only playoff experience was in the shortened COVID season of 2020, the same year Jordan Montgomery of the New York Yankees made his only postseason start, working four innings against Tampa Bay in the division series which the Yankees lost.

Montgomery, who hadn’t made it through the sixth in his three most recent starts, pitched an efficient six innings, striking out five and allowing two runs and four hits. He threw 59 strikes and only 28 called balls out of 87 pitches.

Montgomerey set down 13 of the final 15 batters to face him as he stopped his losing streak at three. The Cardinals had won his first seven starts upon his arrival from the Yankees on Aug. 2.

The strong start by the southpaw further complicates Marmol's decision as to how best to employ his starters next weekend against a wild-card foe which won't be determined for at least a couple of more days.

Montgomery said he had felt “great” before his most recent start when the Los Angeles Dodgers belted him for three home runs and six runs in four innings. On Saturday, he said didn’t feel that good.

“I left a lot of ‘heaters (fastballs) up tonight,” said Montgomery. “But my curveball and my changeup got me through the game.”

The start was No. 32 for Montgomery, who had that as kind of his goal when the season began because in a 162-game schedule, that indicates he has pitched every five games, which every starter wants to do. He didn’t miss an assignment.

“That’s one thing I want to be able to do every year—is to be a tank,” said Montgomery, who is 6-3 with the Cardinals.

Marmol said his takeaway on Montgomery in the two months the latter has been here was “he doesn’t care—in a good way. He doesn’t care what people think about him, which is a positive in this game.”

Dickerson and Montgomery bring that one year of playoff experience but Dickerson said, “You see (playoff experience) all around this room—the way Yadi (Molina) can call a game or the way he can control the environment by. . . the way he stands behind the plate. Waino (Adam Wainwright) having been through it. And, of course Albert (Pujols).”

Brendan Donovan, who reached base three more times as the leadoff man, said, “We have leadership here. And it's a winning culture. They’ve done a done a great job passing it down and then when they're gone, it's up to us and we have to pass it down. Hopefully, we have long successful careers like they did and we pass it down to the guys below us. So that's the beautiful thing about this organization.”

Of course, the Cardinals can’t play a game lately without Pujols doing something. In the second of six opportunities the Cardinals had with the bases loaded, he singled home two runs in the first to give him 2,211 runs batted in, three short of Babe Ruth. Ruth is second to Henry Aaron, who had 2,297.

On the down side, shortstop Paul DeJong, getting a rare start against a right-hander, went nothing for four, striking out twice and failing to make two plays in the field.

Asked if DeJong, now hitting .149 but counted on as a late-game defensive replacement was pressing, Marmol said, “I’m not sure how to describe it, just yet.

“I’m not exactly sure, to be honest with you.”

Albert Pujols and Yadier Molina's career longevities led them to usher in new generations while defining their own.

On Sunday, the unofficial theme of the day was — home. For a man from Puerto Rico and a man from the Dominican Republic, this city in the middle of America is also home. They are eternally welcomed here and forever revered here. Crouched behind home or stoically standing beside it, Molina and Pujols took up residence in St. Louis, where they called home for a combined 31 seasons. Thirty-one. So many home runs and runs crossing home.

St. Louis Cardinals Nolan Arenado, Corey Dickerson, Albert Pujols and Alec Burleson walk back to the dugout after Dickerson smashed a grand slam in the first inning during a game between the Pittsburgh Pirates and St. Louis Cardinals at Busch Stadium on Saturday, Oct. 1, 2022. Photo by David Carson, dcarson@post-dispatch.com