Cardinals cleanup hitter Marcell Ozuna strikes out swinging with the bases loaded to end the top of the fifth inning against the Washington Nationals during Game 4 of the National League Championship Series at Nationals Park. Photo by Robert Cohen, rcohen@post-dispatch.com. 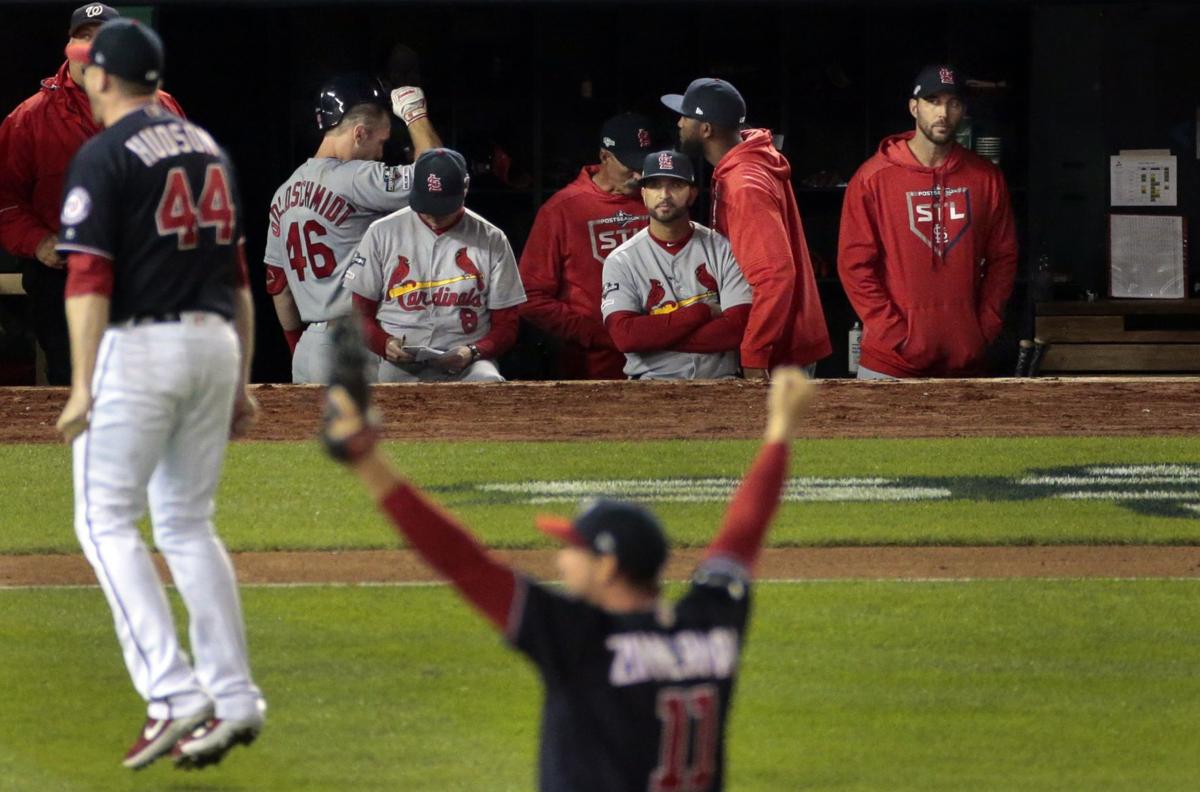 WASHINGTON — That long, winding and grinding and scenic road back to the postseason for a franchise expected to establish residency there took the Cardinals through three seasons of shortfall, two trades for middle-order All-Stars, and even one managerial detour before bringing, finally, a pennant into view with this National League Championship Series.

And it was over.

The Washington Nationals completed a runaway sweep of the Cardinals with a 7-4 victory Tuesday night at Nationals Park to claim the first NL pennant for the nation’s capital. The Nationals bounded to a 7-0 lead before Cardinals rookie starter Dakota Hudson threw his 16th pitch, and then the locals had to fend off a series of flickering rallies from the Cardinals to end the best-of-seven series in five brisk days. The Cardinals never had a lead in any of the games, never had much offensively, never had an answer for any of the Nationals pitchers, and ultimately never had a chance.

“Felt like it kind of sped up on us,” shortstop Paul DeJong said. “I felt like the Braves series lasted forever, and that was only five games. This one was four games, but it felt like a blur. Feel like offensively we kind of staggered. What is there to say? Overall, we didn’t quite stick to our plan enough and they just executed better than us.”

The Nationals, that curiously haughty organization that claimed “World Series or bust” years before they had won a playoff series, advanced with their 16th win in their past 18 games. Ryan Zimmerman, whose first year in the majors was the Nationals' first season not as the Expos, explained how "a lot of those failures kind of taught us and pushed us to get to where we are now. I feel like me, the fans, the community are kind of one, and they deserve this just as much as we do."

Their only two losses in the playoffs have been to the best regular-season team in the NL, the Dodgers. Led by their rotation, the Nats become the first Washington ballclub to reach the World Series since the Senators in 1933, amidst the dust of the Great Depression.

For the Cardinals, now begins a winter of great introspection.

Veteran starter Adam Wainwright, thrust into the first inning to relieve Hudson, has not decided what to do for 2020, suggesting late Tuesday that he’ll spend the next few weeks talking with his family about a return or retirement. He said he "hasn't even thought” about whether he’ll consider pitching somewhere other than the Cardinals. Marcell Ozuna headlines the group of pending free agents, and his wishes to return to the Cardinals — which he repeated Tuesday night — have not been reciprocated by the team. The Cardinals also must address a rotation missing a lefty and an offense absent throughout the NLCS.

A commitment has been made to hitting coach Jeff Albert and the philosophy he’s installing for the entire organization, but the Nationals were able to build on what other teams did and delete any threat the Cardinals’ lineup posed. A strikeout-heavy team, the Cardinals fanned 48 times in this four-game series, including 14 in Game 4.

But the other side of the ledger has the team’s first division title since 2015, its first playoff berth in four years, and its first NLCS visit since 2014.

“It’s probably a little bit of both,” first baseman Paul Goldschmidt said. “You can’t argue that the Nats came out and beat us. We also won the division and got to the NLCS. It’s not the ultimate goal, but we got part of the way there. . . . We needed the big hit. We didn’t get anything going offensively. It starts with me. I had one hit in four games. That’s tough when you’re hitting third. Got to look at myself to start it out. If we were going to win, we were going to have to play better than we did.”

Down 7-0 before the Cardinals sent their fourth batter to the plate, Wainwright described how the game “had 2012 written all over it; didn’t it feel like that for a minute?” That year the Cardinals rallied from a 6-0 deficit in Washington to steal the NLDS. Wainwright, the starter in that game, began 7 2/3 scoreless innings Tuesday from the bullpen that bought time for a rally. The Cardinals grabbed three runs in the fourth, and in the eighth loaded the bases with two outs to put the go-ahead run on and get Matt Carpenter one chance off the bench to reverse the game.

“Clearly, we would have liked a Roy Hobbs kind of moment,” manager Mike Shildt said.

Carpenter grounded out, which was farther into the infield than the middle order got with its chances to shift the score. In the fifth, after Jose Martinez’s two-run double off the right-field wall, Goldschmidt and Ozuna had chances to score Martinez and intensify the pressure on the Nationals. Both struck out. Ozuna went after three of Patrick Corbin’s pitches out of the zone, describing how he “could see the slider, know it was coming, and then couldn’t do anything with it.”

Goldschmidt struck out in seven consecutive at-bats, and with Ozuna’s inning-ending strikeout the duo was two-for-14 in the two games at Nationals Park. The two were Ozuna hits. The other 12 were strikeouts.

He would not get another.

An error, a routine fly ball dropped untouched between three Cardinals, and another single followed, including Yan Gomes’ two-run shot to left-center field that came, yes, on the first pitch he saw. Hudson allowed seven runs (four earned) on 10 strikes. The Nationals hit like they had somewhere to go, like they had hot pockets in the microwave — or like they knew what was coming. They didn’t wait for something other than Hudson’s sinker, not as it floated up in the zone.

“They were on my fastball,” Hudson said. “There are some things that you can do as a pitcher to get them off of that, but I didn’t adjust quickly enough. I’ve been heavy fastball all year, especially in the first. They were maybe cheating under the sinker a bit. That’s a good team’s approach against me any time.”

All series, whether it was pitching or offensive bursts like Tuesday’s first inning, the Nationals seemed to know how to stop the Cardinals better than the Cardinals knew how to start themselves.

Credit the scouting Washington was able to do throughout the month of September, canvassing the possible opponents and assigning scouts to hound after the Cardinals. Bob Schaefer, a longtime bench coach in the majors, was one of the scouts assigned to the Cardinals and watching them through 19 innings in Arizona, a clincher against the Cubs, and the series win in Atlanta, there was ample dossier to add to the analytics. And then the Nats unleashed their starters.

In the offseason when they could not reach an agreement with Bryce Harper, the district’s first superstar player, and he became a free agent, the Nationals doubled down on pitching. They signed lefty Corbin to go with Max Scherzer and Stephen Strasburg as an October Hydra. The Nats committed more than $500 million to their rotation, and then outfitted it with all the data necessary to bedevil the Cardinals.

A grand total of four earned runs allowed in four games — all of them against Corbin — and the Nats had the pennant they craved.

The Cardinals, back at the big table, leave still unsatisfied.

“You can’t argue that we also won the division and got to the NLCS — it’s not the ultimate goal, but we got part of the way there,” Goldschmidt said. “Next year is going to be a new year. There are going to be new players. We’ve got to earn every win. Take this experience for what it is. Try to improve. See what happens.”

Cardinals closer Carlos Martinez, who moved into a relief role this past season because of recurring soreness and weakness in his right should…

Hummel: This might have been Cardinals' worst showing ever in a postseason series

WASHINGTON — The deck already was stacked against the Cards. No major-league team other than the 2004 Boston Red Sox had overcome a 3-0 defici…

BenFred: Where was Goldschmidt's thump when Cardinals needed it most?

Goldschmidt came to the plate with the Cardinals' lone big inning in progress. The Beltway was feeling familiar nerves. Then Goldschmidt struck out. Again.

WASHINGTON — If it wasn't for a Marcell Ozuna hit in the eighth inning on Tuesday, the Cardinals would've finished the postseason under “The M…

Cardinals cleanup hitter Marcell Ozuna strikes out swinging with the bases loaded to end the top of the fifth inning against the Washington Nationals during Game 4 of the National League Championship Series at Nationals Park. Photo by Robert Cohen, rcohen@post-dispatch.com.