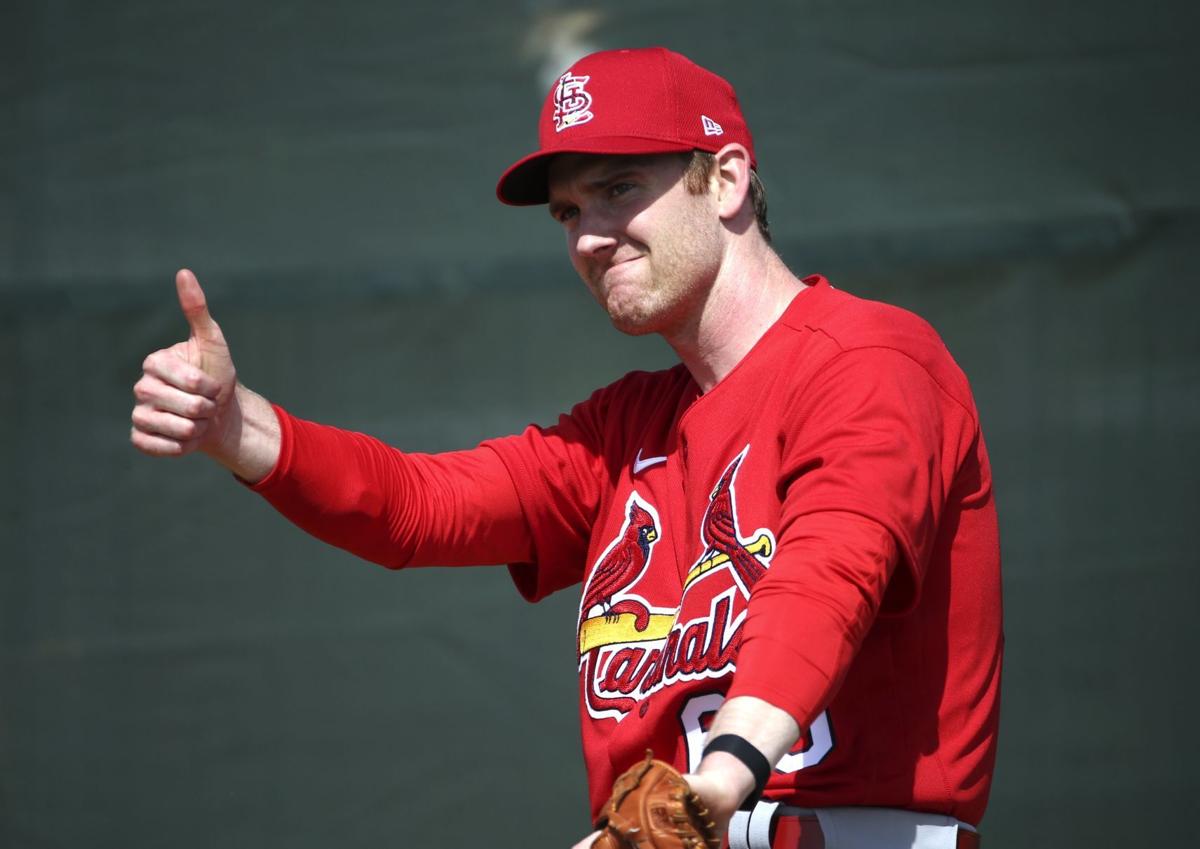 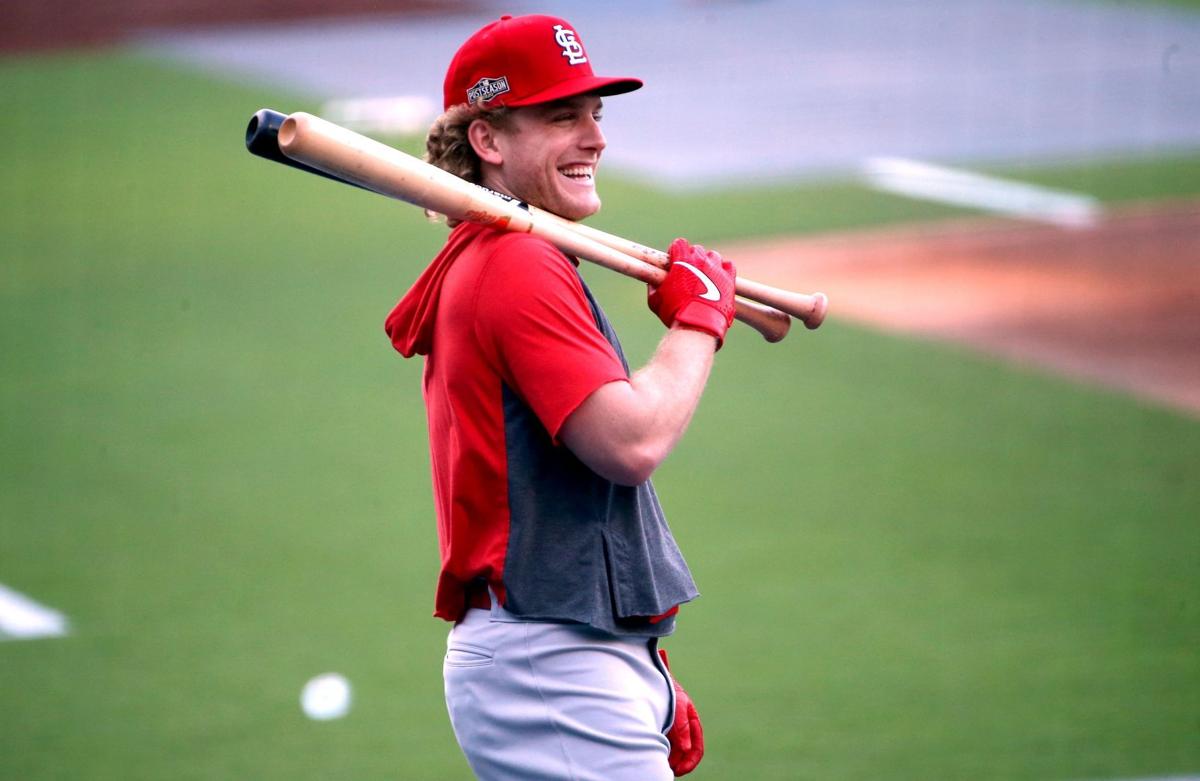 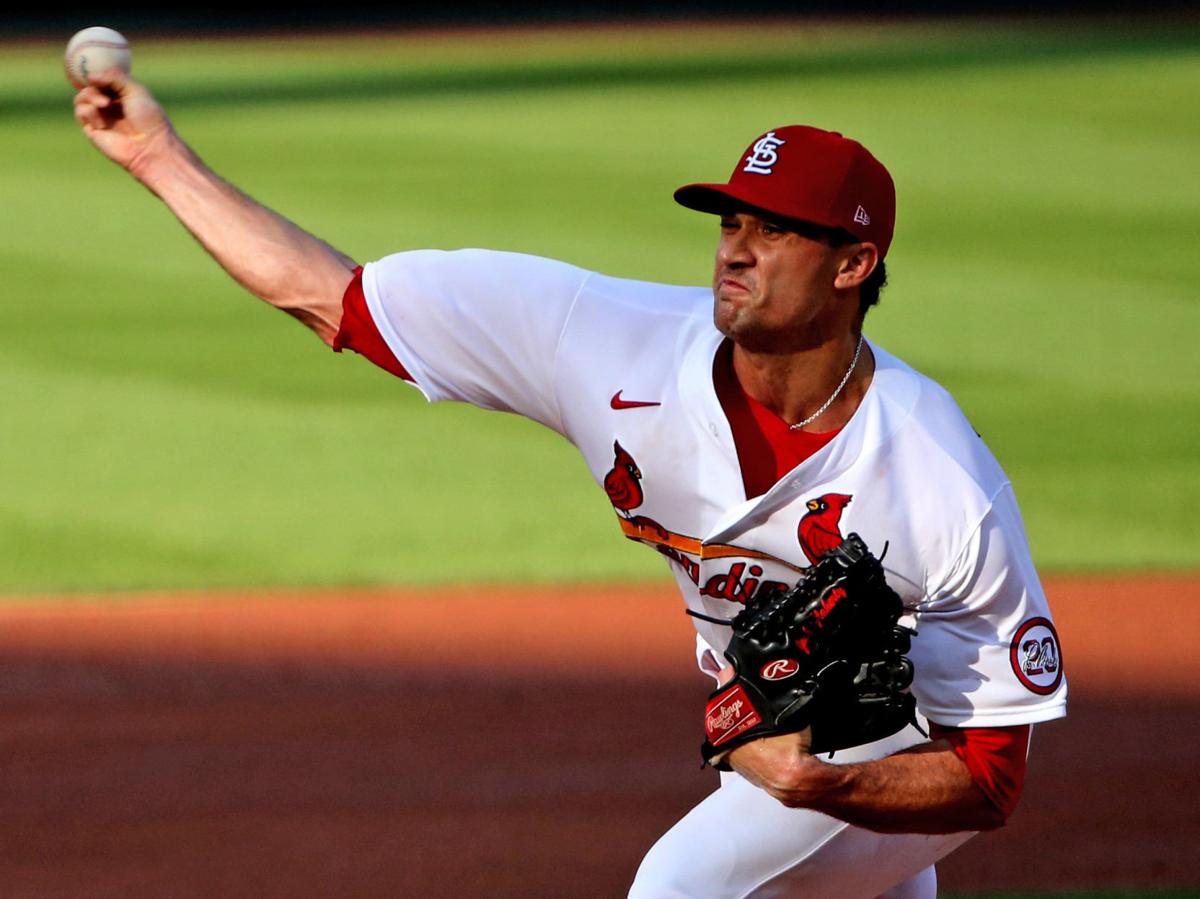 St. Louis Cardinals starting pitcher Jack Flaherty (22) throws a pitch in the second inning of Game 1 of a doubleheader between the St. Louis Cardinals and Milwaukee Brewers on Friday, Sept. 25, 2020, at Busch Stadium in St. Louis. Photo by Laurie Skrivan, lskrivan@post-dispatch.com

After a full day of rehab and more rehab for his rebuilt right elbow, John Brebbia would find a comfortable spot at home, relax, and run his fingers over the seams of a baseball. He’d shift from fastball grip to changeup and then breaking ball while thinking, “OK, John, make sure you don’t forget all these.”

Due to Tommy John surgery, it could be 12 months for him between pitches in an exhibition game, as many as 20 months between unleashing a fastball to a hitter in a moment that counts toward his baseball card.

“I’ve been sitting here tapping my fingers against my leg, or tapping my foot against the floor, waiting to do anything I had to do just to get to the day I had a chance to start throwing, and here it is, and it’s when it’s the coldest time of the year,” Brebbia said Tuesday, laughing. “I’m feeling great, and I’ve been a totally normal person, except for the fact I couldn’t throw, and that’s what I do for a living.”

Brebbia began his throwing program Monday, playing catch with a baseball for the first time since spring. The significance of this week for the righthander began with an important step toward when he’ll pitch in 2021 and continues with the day that can determine where he’ll pitch in 2021.

The deadline for the Cardinals’ decision arrives Wednesday night.

Brebbia is one of six Cardinals — along with Jack Flaherty and Jordan Hicks — who are eligible for arbitration and must be offered a contract for 2021 by 7 p.m. St. Louis time. Arbitration-eligible players who do not receive contracts are considered “non-tendered” and become free agents.

This annual December day usually frees up players whose performance has not kept pace with swelling salaries. That gives baseball another trickle of talent into the marketplace. This year, for an industry seized by financial turbulence during a global pandemic, the “tender” deadline is expected to undam a new deluge of available players. There are a few times each year when clubs can cut costs, immediately, and this is one — salaries can be lopped off, flexibility sought, and savings achieved.

During a penny-conscious offseason, teams waiting on this new wave of free agents is part of what has slowed signings and negotiations. Options are set to increase at some positions, and that could suppress salaries when supply exceeds demand.

Unsettling hints of what’s to come started weeks ago, first with teams declining options, as the Cardinals did with second baseman Kolten Wong, and continued before Thanksgiving with teams trimming talent from their roster. The Tampa Bay Rays passed Gold Glove-winning outfielder Hunter Renfroe through waivers and into free agency to clear a roster spot before they would have non-tendered him. The Cubs have to make a decision on two of their higher-priced players, former MVP Kris Bryant and slugger Kyle Schwarber. While it appears unlikely, new president of baseball operations Jed Hoyer could just walk away from a commitment to at least $26 million in salary. Similarly, in San Diego, the Padres have to decide whether to assure a raise for outfielder Tommy Pham after a season riddled by injuries.

The Cardinals’ calls are less … thorny.

The Cardinals have not approached Flaherty about a multi-year contract, and the righthander could see his salary for the coming season quadruple to more than $2 million through the arbitration process. That’s still a tidy value for the Cardinals’ opening day starter.

Bader, as a starter with superb defense, will see a sizeable bump, too, and the Cardinals must weigh in-house alternatives at center against Bader’s rising salary. Young talents Hicks and Reyes have had extended absences due to injury early in their careers and their roles or upsides still exceed their expected salaries. Less certain in the icy market is the situation for older and middle relievers — like Brebbia and the sixth Cardinal who is arbitration-eligible, John Gant.

Gant’s full-season salary was $1.3 million this past year, and his second year in arbitration promises a raise that the open market likely won’t this season. That numbers crunch could lead the Cardinals to slice off a certain cost and lean on their stockpile of pitching.

Brebbia is both part of that depth — and a decision himself.

The 30-year-old righthander had a full-season salary of $587,600 for 2020, and he was unable to throw a pitch in competition due to an elbow injury in late spring and reconstructive surgery on June 1. His arbitration case would rest on his previous seasons and a 3.14 ERA in 161 games and a 10.2 strikeout rate per nine innings in 175 innings. Based on precedent and comparable players and thus firewalled from the open market, arbitration will score him a raise that being a free agent during rehab likely won’t. He was asked if he had any doubt that the Cardinals would present him a contract for 2021.

“I try and pride myself on having doubt about everything,” Brebbia said. “My strongest motivation is fear — and I fear not being able to play baseball again. So, I’m not the guy who is going to make assumptions. That makes me complacent. There is doubt. There is always doubt. The moment that I think I have a spot or that I’m guaranteed a chance at arbitration — that’s the moment my career dies.”

A factor for the Cardinals will be committing a roster spot now and Brebbia’s availability in 2021, let alone his role in the bullpen for 2022. On his phone, Brebbia has a list of the guide dates for his rehab. He is scheduled to throw off a mound in January, face hitters in live batting practice during the weeks of spring training, and his recovery and advancement will determine if he’ll be available to pitch, in games, early in the planned 2021 season. The possibility of having him in April or May adds to how agreeable his salary would be.

Near his Atlanta-area home, Brebbia threw Monday at distances of 45 and 60 feet. He felt good, comfortable, and cautioned that he “put more stress on my elbow closing my car door than I did playing catch.” He’ll throw almost every other day, recovery permitting, and continue the steady climb back from Tommy John surgery.

A contract presented by Wednesday’s deadline assures an arbitration-eligible player of a spot on the roster. Salaries can be negotiated at any time, or determined later via arbitration hearings.

The Cardinals have used this deadline in the past to explore multi-year deals with players like Flaherty, but there seems to be little appetite for long commitments in this climate. The Cardinals have said they do not have a payroll target set for 2021, and that is in part because it’s uncertain when the season will start, how many games it will be, and whether there will be a DH in the NL or not. They have prioritized flexibility, and they have engaged in progressing talks with catcher Yadier Molina about a return.

When the latest class of free agents becomes official Wednesday evening, there will be options for the Cardinals to consider at positions of interest. Twins outfielder Eddie Rosario, a lefthanded-hitting bopper, is a non-tender candidate, and set to join Renfroe in that mix. A parade of pitching possibilities will be available too. But, like contracts for non-tendered players, one other things isn’t guaranteed after the deadline — any warming of the pace for this winter’s hot stove.

“I do not want to be in a front office right now,” Brebbia said. “I do not envy the stuff they have to go through figuring out what happens as a result of everything in 2020, all the decisions. It seems like a real headache.”

Cardinals hope to continue conversation with Brebbia about a minor-league deal as he rehabs from elbow surgery.

Outside options: Five newly available free-agent hitters who could give Cardinals a needed complement (or more)

Dahl and Rosario are obvious outfielders for the Cardinals to consider as they search for offense. But there are others. Also: Gant finalizes deal for 2021.

Righthander is in the early weeks of a throwing program as he recovers from elbow surgery that ended his 2020 season before it started. Had a 3.14 ERA in three seasons with Cardinals.

St. Louis Cardinals starting pitcher Jack Flaherty (22) throws a pitch in the second inning of Game 1 of a doubleheader between the St. Louis Cardinals and Milwaukee Brewers on Friday, Sept. 25, 2020, at Busch Stadium in St. Louis. Photo by Laurie Skrivan, lskrivan@post-dispatch.com