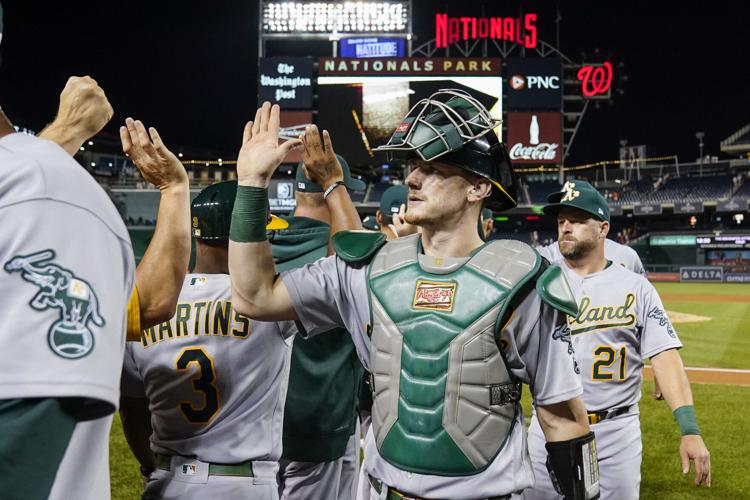 Oakland catcher Sean Murphy, center, celebrates with teammates after a game against the Nationals on Tuesday, Aug. 30, 2022, in Washington. 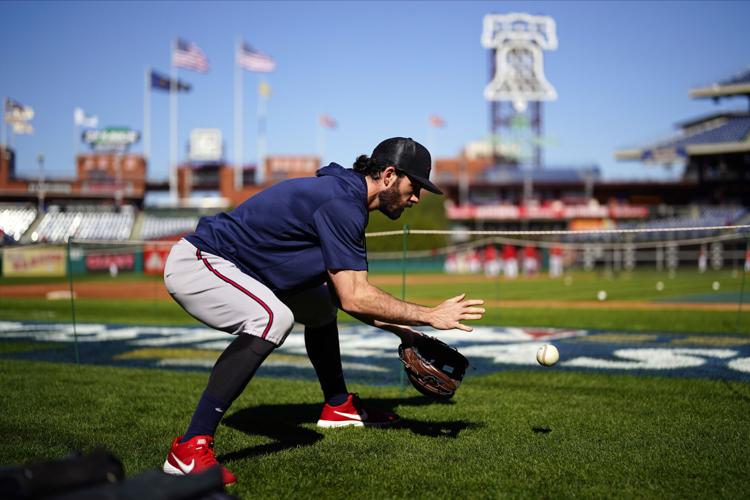 Atlanta shortstop Dansby Swanson warms up as he takes part in batting practice before Game 3 of the National League Division Series against the Phillies on Friday, Oct. 14, 2022, in Philadelphia.

SAN DIEGO — In the market for an everyday catcher for the first time in a generation, the Cardinals spent the past month in trade discussions or conversations with candidates, even meeting with at least two free-agent possibilities, and they have arrived at the winter meetings aware of the long and short of the search.

They’re hopeful to have that addition shortly.

“I do feel like now that we’re back into these meetings ... it does have this different feel of urgency,” said John Mozeliak, president of baseball operations. “Can I say, ‘I hope’? Look, I can’t speak on this with 100% confidence because there are other variables in play here. We would like to see something done.”

As Major League Baseball’s annual industry gathering continued in San Diego on Monday, the Cardinals remained in talks with the Oakland Athletics about Gold Glove-winning catcher Sean Murphy. Two sources described Murphy as the catcher atop the Cardinals’ pursuit — the one they would rank first if pressed — though they remain involved in talks with alternatives should Cleveland or another suitor outbid and acquired the 28-year-old catcher. The Cardinals also see Toronto catcher Danny Jansen as an appealing acquisition, and team officials had interviews with free-agent catchers Christian Vazquez and Willson Contreras, per sources.

Contreras spoke recently with a group of Cardinals officials that included manager Oliver Marmol. Vazquez’s conversation with the Cardinals was described as strong, and that both sides see the fit, though the two-time World Series champ is also drawing interest from as many as five other teams, including Minnesota, the Cubs, and the Astros. The defending champs are reportedly interested in several of the same catchers as the Cardinals.

“The biggest decision for us is how do we obtain it,” Mozeliak said. “Is it free agency? Is it trade? And just trying to maintain some level of keeping things alive until we determine what we think is the most ideal fit for us.”

An area where the Cardinals are also “keeping things alive” is with the shortstop market. The Cardinals have been described by sources as “on the periphery” of those pursuits, not chasing the headliner like Trea Turner, who signed with Philadelphia, but interested in the next tier. There is a series of moves that would lead to the Cardinals trading for a catcher, possibly moving a middle infielder in that deal, and then pivoting to bid on a shortstop. The interest in Dansby Swanson, last with Atlanta, has its roots in preparing for those possible moves, a source described.

Asked about the shortstop position, Mozeliak emphatically said it was Gold Glove-winner Tommy Edman’s and that the team intended to give Paul DeJong ample playing time in spring to hit his way into a role.

But, Mozeliak acknowledged the catcher move could have ripple effects on the roster.

“It’s Tommy Edman’s job, and we feel like we have really, really good options for second base,” Mozeliak said, naming Brendan Donovan and Nolan Gorman specifically. “How we redeploy our resources, how we think about other moves, it’s a little bit to be determined. A lot's predicated on how we acquire a catcher.”

In the team’s suite Monday night, Mozeliak mentioned some of the traits the team seeks in its new catcher, the everyday catcher who will take over the position left open by Yadier Molina’s retirement. One is “length” of control. Similar to other moves the Cardinals have made to acquire and extend a player, Mozeliak said that “stability” would put a thumb on the scale and that the team would prefer that to a “short gap” move. That is part of the appeal of the trades as Murphy comes with three years of control, Jansen two.

Both would be offensive upgrades over the production the Cardinals received from the catcher position a year ago.

Oakland manager Mark Kotsay noted Monday that he’d prefer not to field questions about trading Murphy and just “write his name in the No. 3 hole and have him in that lineup as a leader as well.”

“I don’t see a ceiling for Murph in terms of that position and the value that that position brings to a ball club,” Kotsay said. “I think he’s still got power. He’s going to probably hit for more power. I think he’s going to cut his strikeouts down because he started understanding the strike zone a little bit better. ... He’s already got a Gold Glove. I don’t know how much higher he can go unless he somehow pulls off a Platinum Glove at the catching position.

“He controls the running game. He handles the staff. He’s dedicated to his game plan. He led scouting reports for us this season.”

And he noted that Murphy shed 10 to 12 pounds before coming to spring training this past year to lessen the weight he put on his knees, the strain he put on his back.

The result was a career-high 148 game appearances that included 116 starts at catcher and more than 1,000 innings behind the plate. He hit .250 with a .332 on-base percentage, a .759 OPS, and 18 homers to go with a career-high 66 RBIs and 37 doubles. Murphy takes that year into his first year of arbitration eligibility, and that rising salary is prompting the A’s to entertain offers. Murphy’s upside and years of control along with the competitive bidding for him allows the A’s to make an elevated ask for him, and one of Oakland’s goals would be to add a major league-ready player or two in the deal that would have more years of control and a lower immediate cost.

Two decades have passed since the Cardinals last went shopping for an everyday catcher, and Molina manned the position for nine Gold Glove awards and 10 All-Star Game selections since taking over for Mike Matheny during the 2004 World Series. Mozeliak said he has talked to Molina for his opinion on a few of the catchers who could take over that position.

“We hope we can identify (one) who can do that seamlessly, but still be true to themselves,” Mozeliak said. “Not try to chase who Yadi was. That’s a lot of pressure for an individual.”

The Cardinals’ catching position was the least productive offensively in the lineup and one of the least productive in the majors. As a group, the Cardinals catchers had a .290 slugging percentage and a .264 on-base percentage for a .553 OPS that ranked third lowest in the majors. As free agents, Contreras and Vazquez illustrate the spectrum of options — with Contreras standing out as the top offensive option and Vazquez being the steady defensive presence, a catcher who has modeled some of his game after Molina’s and earned a reputation for guiding pitchers.

The Cardinals have identified about four preferred candidates who are available at catcher, recognized the different traits they each bring to the position, and see the potential for the market to move this week to reveal who they have the best chance to write into their lineup.

“I think the good news for us is we feel like there’s multiple options out there,” Mozeliak said. “The most important takeaway is what you don’t want to have happen is when the music stops you’re left standing. I think right now we have identified targets we hope we can achieve.”

Walker, the Cardinals' top prospect and one of the top hitting prospects in baseball, could win a spot on the opening day roster with strong spring.

The St. Louis Cardinals have reached a deal with veteran free agent catcher Willson Contreras sources confirm to the Post-Dispatch. The deal i…

Wilking Rodriguez, struck out more than 40% of the batters he faced in Mexico, though he has not been in the majors since 2014. Also: Ads on C…

Broadcaster Dan McLaughlin, the television voice of the Cardinals, was charged on Monday with a felony count of "persistent" driving while int…

Goldschmidt’s nod to the All-MLB fist team is the first of his career since the accolade was introduced in 2019.

Zuniga, who played the last two seasons for the Dodgers' Class AA affiliate, has a 10.3 strikeouts per nine innings over six seasons in the mi…

Oakland catcher Sean Murphy, center, celebrates with teammates after a game against the Nationals on Tuesday, Aug. 30, 2022, in Washington.

Atlanta shortstop Dansby Swanson warms up as he takes part in batting practice before Game 3 of the National League Division Series against the Phillies on Friday, Oct. 14, 2022, in Philadelphia.