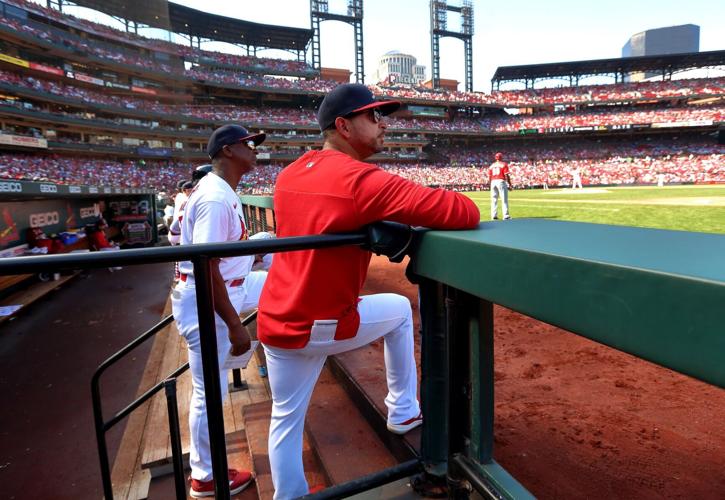 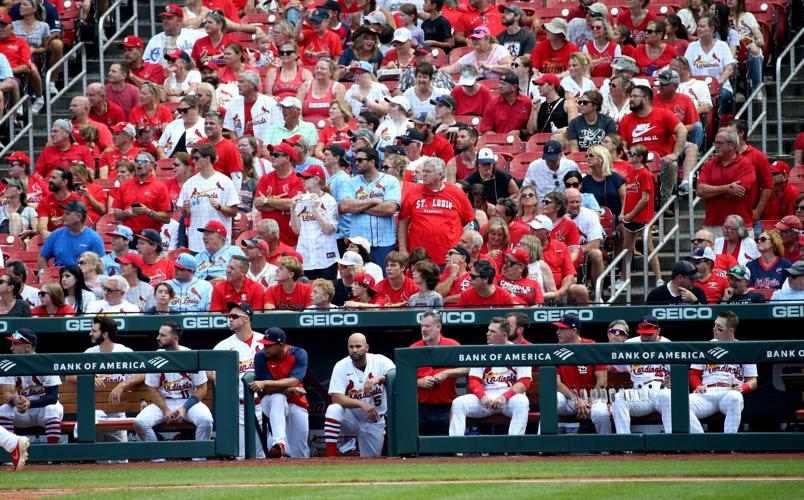 After popping out in the ninth inning, the Cardinals' Albert Pujols (5) joins teammates watching the end of the team's 3-0 loss to Cincinnati on Sept. 18, 2022, at Busch Stadium. 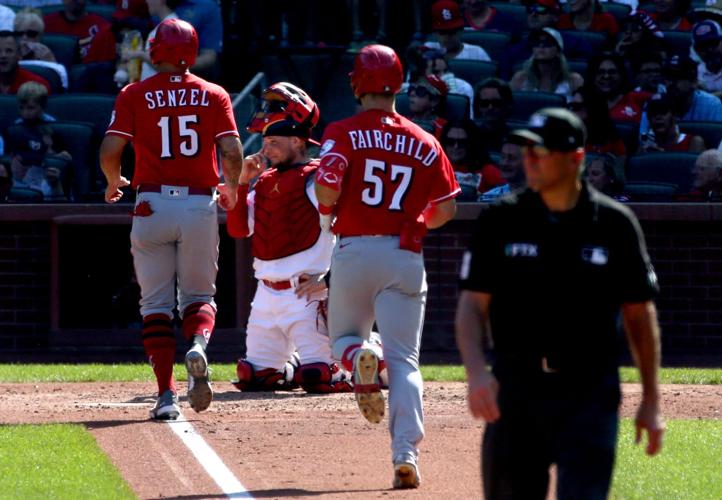 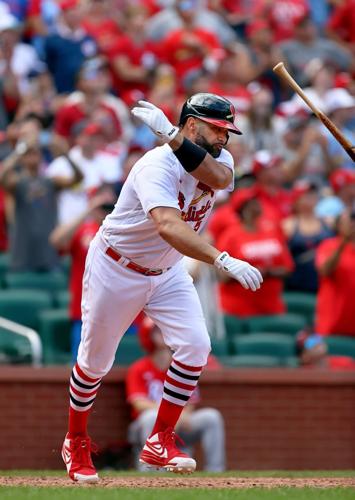 Cardinals first baseman Albert Pujols tosses his bat to the side after he popped out in the ninth inning against the Reds at Busch Stadium on Sunday, Sept. 18, 2022. Pujols went 0-for-4 on the day.

Those were Cardinals manager Oliver Marmol’s takeaways from the five-game series with Cincinnati in which the Cardinals were fortunate to have won three. Sunday’s two-hit loss to the Reds was not among them as the Cardinals were blanked for the 14th time, 3-0, to go with the 16 shutouts they have thrown this season.

The Cardinals, who struck out 17 times in a 1-0 win in 11 innings on Saturday night, struck out just twice on Sunday. That matched their hit total, one of which was Paul DeJong’s single off the glove of Cincinnati shortstop Jose Barrero. The other was a bloop to right by Yadier Molina.

Marmol, surveying the recent past as he sat in his office early Sunday evening, said, “(Lars) Nootbaar was super hot. (Corey) Dickerson was super hot. ‘Goldy’ (Paul Goldschmidt and (Nolan) Arenado were super hot all at the same time. And they were producing a lot of runs. And now you have a hole with those four guys.

“So do I think all four of those guys will be fine? Yeah. So that’s why it’s less of a concern.”

“We’re not machines,” said Dickerson, politely. “We’re human. It’s just one of those things. A trend? What do you mean?

“Do you think it’s a trend that Goldschmidt hasn’t had a great week? That’s just baseball.”

The frustration, Marmol said, came from not doing any more business than it did against a Cincinnati staff that ranks 13th out of 15 in earned run average in the National League and leads it in walks. The Reds employed 15 different pitchers during the series.

“If it was good pitching, we’d probably not sit here and question the offense,” Marmol said. “Like you’re not supposed to deliver a ton of runs against them. There’s no real answer for it other than to get some rest (on Monday) and go right back at it.”

The Cardinals’ next three series will come against the playoff-caliber pitching of the San Diego Padres, Los Angeles Dodgers and Milwaukee Brewers.

“But we faced some good pitching when were on a tear,” Marmol said, referencing series wins over the New York Yankees, Milwaukee and Atlanta. “I attribute this (dry spell) more to randomness. We look forward to this trip to the West Coast with our guys being energized and ready to go again.”

After the Cardinals had won all of newcomer Jordan Montgomery’s first seven starts — he allowed just seven runs — they have lost his past two. Montgomery, who struck out a season-high nine in 5 1/3 innings Sunday, made only one mistake, a sinker to Stuart Fairchild that resulted in a two-run homer in the sixth inning. Fairchild, who has been with four organizations since spring training, has six runs batted in for the Reds, all on his five homers.

“Just made a bad pitch to Fairchild,” Montgomery said. “I had pretty good stuff. They either hit it or they missed it. I would have loved some more ground balls.

“I struck out nine guys. I should be excited about that, but I’m not. It stings.”

Montgomery was better more often than not but said, “I would call it a bad game, because we lost. Baseball just (stinks) sometimes.”

On Albert Pujols Bobblehead Day, the 26th sellout crowd of the season, 47,909, attended. Pujols, who played first base, went 0 for 4 to remain at 698 homers with just three of the Cardinals’ final 14 games to be played at Busch.

“I grew up wanting to be him on PlayStation,” said Reds starter Luis Cessa. “I hope he hits 700 home runs, just not off me.”

Montgomery’s former Yankees teammate Cessa, who mostly was a reliever in New York, was a ground-ball machine through three innings with every out recorded on the ground. But his defense almost let him down in the third. First, shortstop Jose Barrero failed to backhand DeJong’s backhand smash to his right.

That gave the Cardinals runners at first and second with one out and then second baseman Matt Reynolds booted Brendan Donovan’s potential double-play ball and then couldn’t even get an out at first. But with the bases loaded, Barrero gobbled up Dickerson’s grounder and, indeed, did start a double play that ended the inning.

“They gave us every opportunity to get back into that game, and we just didn’t,” Marmol said.

Marmol chose to rest Goldschmidt and middle infielder Tommy Edman, who lead the club in games played at 139 and 143, respectively. He could have used Edman as a pinch hitter for DeJong in the eighth but wanted to make the off days real off days. Plus, he wanted to keep DeJong sharp in that the Cardinals are liable to face many left-handers this week, especially in Los Angeles.

“He needs to get going,” Marmol said. “He’s got to hit. So a game like today, I let him take the at-bat and see what it looks like.”

Goldschmidt had struck out four times in Saturday night’s second game, and Marmol said, “‘Goldy’ was not going to see the field today.”

The day wasn’t a total wash, though. Milwaukee squandered an early three-run lead and lost 12-8 to the Yankees, keeping the Cardinals eight games ahead of the second-place Brewers in the NL Central Division. Next for the Brewers is a three-game series in Milwaukee against the New York Mets, whom the Cardinals are chasing for the second seed in the National League postseason tournament.

Marmol, asked for whom he would root, replied, bluntly, “I could care less about those games. It’s interesting, but I don’t mentally play that game. I hope they play 30 innings tomorrow and the commissioner gets so ticked off at the pace of play that he gives them both a loss.”

> Notebook: Molina to manage this winter. B5

Rookie second baseman Nolan Gorman batted .114 and stuck 17 times in his last 35 at-bats with the Cardinals.

“We're witnessing a really cool part of history,” said Cardinals manager Oliver Marmol, who has the best seat in the house. “And we'll look back at this and be able to tell some pretty cool stories.”

After popping out in the ninth inning, the Cardinals' Albert Pujols (5) joins teammates watching the end of the team's 3-0 loss to Cincinnati on Sept. 18, 2022, at Busch Stadium.

Cardinals first baseman Albert Pujols tosses his bat to the side after he popped out in the ninth inning against the Reds at Busch Stadium on Sunday, Sept. 18, 2022. Pujols went 0-for-4 on the day.