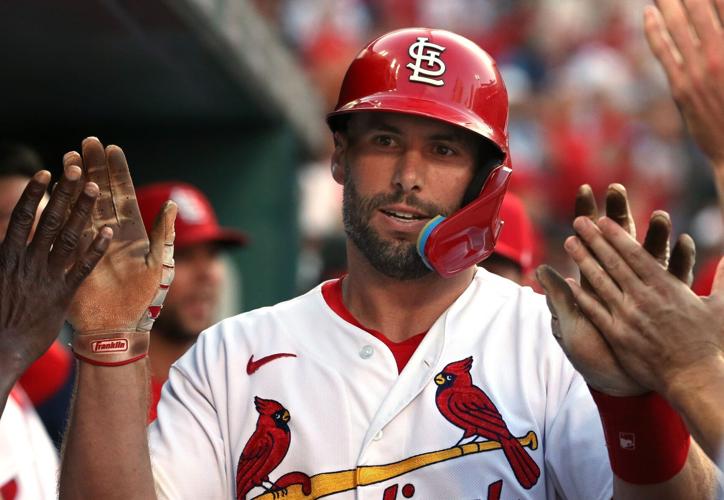 Paul Goldschmidt has been selected to his first All-Star Game as a Cardinal, and seventh overall. 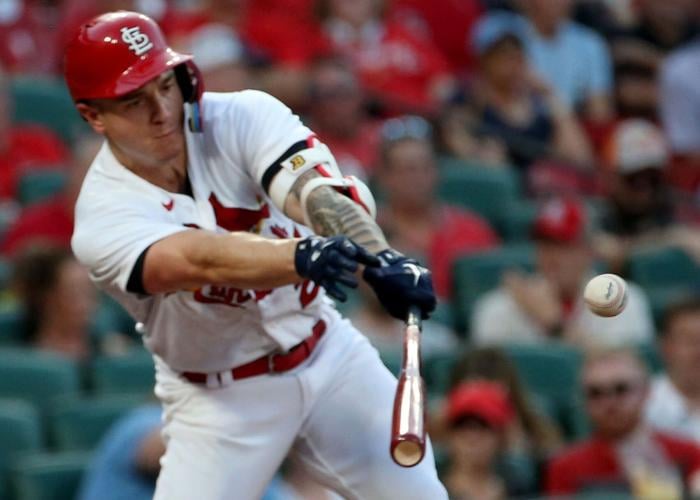 Cardinals left fielder Tyler O'Neill singles in the fourth inning of a game against  Pittsburgh on Monday, June 13, 2022, at Busch Stadium. 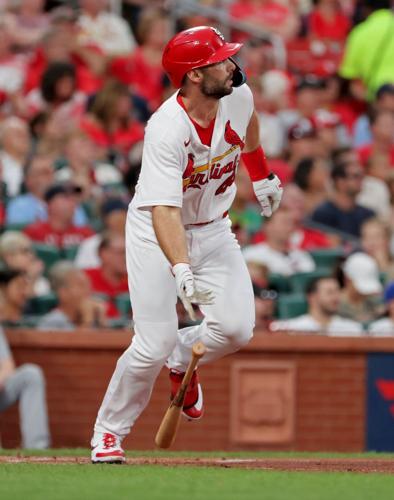 St. Louis Cardinals designated hitter Paul Goldschmidt singles on Friday, July 8, 2022, in the first inning of a game against the Philadelphia Phillies at Busch Stadium in St. Louis, Mo. 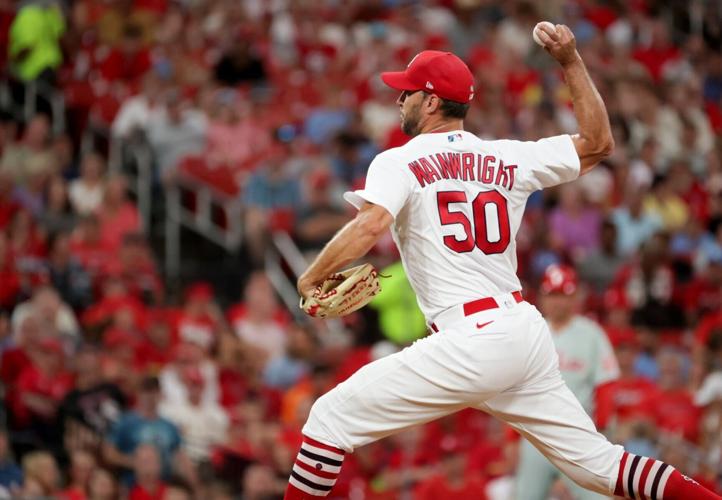 St. Louis Cardinals pitcher Adam Wainwright throws on Friday, July 8, 2022, in the second inning of a game against the Philadelphia Phillies at Busch Stadium in St. Louis, Mo. 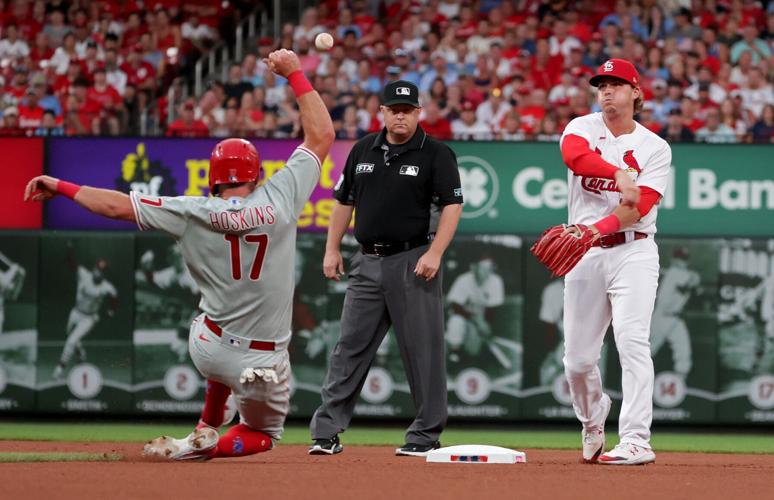 Paul Goldschmidt hadn’t made either of the two All-Star Games he had been eligible for in his first three seasons with the Cardinals. That doesn’t necessarily mean he wasn’t a good enough player to make the National League club. It means he wasn’t good enough in the first half of the season.

This year, Goldschmidt probably has been the best player in the NL in the first half of the season, with a league-leading .342 average and 1.046 OPS. And on Friday the fans elected him to his seventh All-Star club, with the first six coming while he was an Arizona Diamondback. Goldschmidt beat New York’s Pete Alonso, 67% to 33% in a run-off vote involving the top two players in the initial fan balloting.

Before the announcement, Cardinals manager Oliver Marmol said, “He better be (an All-Star Game starter).”

And for the fourth time in his career, Goldschmidt will be. He started at first base in 2014 and 2015 and at designated hitter for the NL team in 2018.

Third baseman Nolan Arenado was a close runner-up to San Diego’s Manny Machado (51% to 49%) in the voting and almost certainly will be added to the club when the remainder of the team is announced Sunday night.

Earlier in the day, 42-year-old Cardinals DH Albert Pujols, who is retiring after the season, was an All-Star choice by commissioner Rob Manfred, who also chose Detroit’s Miguel Cabrera, the newest member of the club encompassing those who have 3,000 hits and 500 home runs. Manfred, under a new rule in MLB’s collective bargaining agreement, could pick one player from each league as a legacy selection for their contributions to baseball.

Pujols said, “I enjoyed my first one ... the nine after that and I’m definitely going to enjoy this one. I enjoy every single one like it’s my last one.”

In his 11 seasons with the Cardinals, Pujols was an All-Star every year but 2002 and 2011 and he also made the American League club in 2015 in Cincinnati as an Angels player. That’s when Pujols, jokingly, implored the fans to boo Cardinals catcher Yadier Molina, a National League All-Star but hardly a fan favorite there.

“That was pretty crazy,” Pujols said, laughing. “But I don’t think he was surprised. He knew that was coming.”

Pujols played only three months with the Los Angeles Dodgers last year after the Angels released him, and said he will enjoy going back to Dodger Stadium, site of this year’s All-Star Game.

“To go through 19 years and get booed (as a Cardinal and Angel) and have 50,000 people cheering for you every night was great,” he said.

Asked if he would partake in the Home Run Derby, Pujols deferred to today’s sluggers.

Another setback for O’Neill

This was to be the weekend that Cardinals outfielder Tyler O’Neill, who has been on the injured list because of shoulder and hamstring injuries, was going to be activated. Not so fast.

He returned home to be examined by team doctors, who were going to look at his left hamstring anyway but were more bothered by the bruised right wrist O’Neill suffered when he was hit by a pitched ball in his first at-bat on Wednesday night when he was playing for the Class AAA Memphis club on a rehab assignment in Durham, North Carolina.

There is swelling in his hand, just above the wrist, and Marmol said O’Neill will be re-evaluated Monday.

“How the swelling is coming down is going to be the determining factor more than anything else,” said O’Neill, who had had his hand in a splint but had it wrapped on Friday before the game.

O’Neill finished the game on Wednesday and made a dozen competitive throws from the outfield, he said, with “relatively no discomfort. Obviously, I knew my wrist was hurting but I didn’t let it impede my play in any throw or at-bat after that.”

But, he said, “To have something like is very frustrating — and very surprising. I had intention to be activated.

“It wasn’t something I would have thought twice about if I didn’t have to get the imaging done.”

O’Neill wonders when his luck will turn.

“I’ve asked myself that a couple of times, for sure,” he said. “I know my time is coming.”

In between his shoulder and hamstring injuries, O’Neill had consecutive three-hit games. He hopes he can convince the medial staff he went through the worst of it when he played an entire game with the bruise.

“But I’m going to have to go with what the experts are saying in collaboration with how I’m feeling. There’s definitely some serious inflammation in there. At least there was yesterday but it’s gone down a good bit,” he said. “The next 48 to 72 hours are going to be key for me.”

“We were anticipating activating him today,” said Mozeliak, with disappointment. “I feel terrible. Any time you send somebody out on rehab, there’s always risk of injury. But this is a new injury.”

Left-hander Genesis Cabrera, who was on the COVID-related injury list, was activated from the IL and right-hander James Naile, a Charleston, Missouri, product who was unscored on two relief outings, covering 4 2/3 innings, was optioned to Memphis.

“We sort of knew what we had there,” Mozeliak said. “I’m not sure how much more upside.”

Mozeliak said that outfielder Corey Dickerson (strained left calf), who has rejoined the club from his second brief rehab outing, likely will be activated on Saturday or Sunday.

• Left-hander Steven Matz (left shoulder impingement) will have at least one more rehab outing for Memphis, Mozeliak said. That probably would come on Tuesday. Matz threw 3 2/3 innings (59 pitches) on Thursday.

• Left-handed reliever T.J. McFarland (Memphis) and right-hander Drew VerHagen (Peoria), both on the IL, each threw a scoreless inning in rehab outings on Friday night. VerHagen, who started for Peoria, allowed a walk and a hit while striking out one in throwing 23 pitches. McFarland allowed a hit in tossing just eight pitches.

• Former regular shortstop Paul DeJong, hit in the hand by a pitch while at Memphis, hasn’t played in more than a week but doesn’t seem hurt too seriously, Mozeliak said.

“Reports are that they’re encouraged where he is. The last medical report, which I saw last night, said that he was getting closer.”

Detroit Lions punter Jake Fox, who played high school ball at Ladue before going to Rice, threw out a ceremonial first pitch after first booting a football into center field, where it was caught by Lions placekicker Austin Seibert of Belleville West and Oklahoma.

Cardinals have two complete games this season. They have lost both and have dropped seven of nine overall.

Donovan is dealing with an undisclosed illness, creating a rewrite of the top of the order. Check out First Pitch for lineups, injuries and updates.

Paul Goldschmidt has been selected to his first All-Star Game as a Cardinal, and seventh overall.

Cardinals left fielder Tyler O'Neill singles in the fourth inning of a game against  Pittsburgh on Monday, June 13, 2022, at Busch Stadium.

St. Louis Cardinals designated hitter Paul Goldschmidt singles on Friday, July 8, 2022, in the first inning of a game against the Philadelphia Phillies at Busch Stadium in St. Louis, Mo.

St. Louis Cardinals pitcher Adam Wainwright throws on Friday, July 8, 2022, in the second inning of a game against the Philadelphia Phillies at Busch Stadium in St. Louis, Mo.