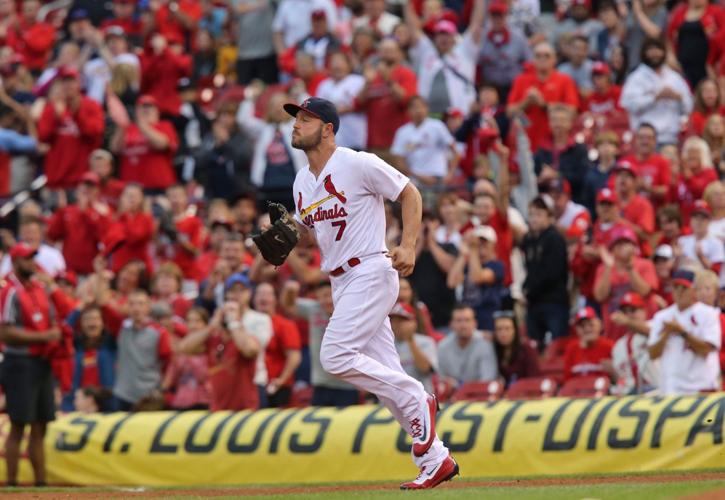 Cards Matt Holliday jogs onto the field for the final time in the ninth inning of the game between the Cards and the Pirates on Sunday, Oct. 2, 2016, at Busch Stadium. Holliday got a standing ovation. Photo by J.B. Forbes, jforbes@post-dispatch.com 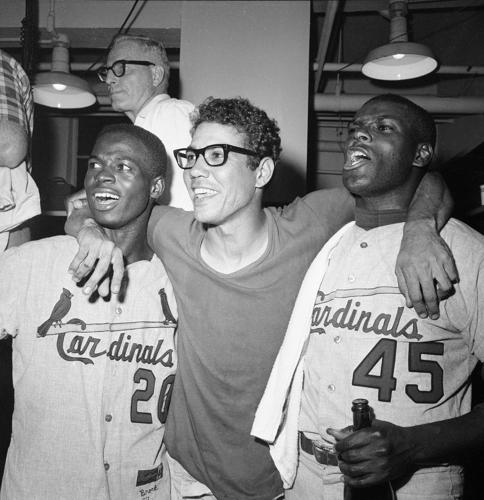 Holliday, a fans’ choice, and Javier, selected as a veteran player by the Cardinals’ Red Ribbon voting committee, were two of the players named to the eighth class of the Cardinals’ Hall of Fame, announced Friday night.

The other was the late Charlie Comiskey, a first-baseman/manager for the original St. Louis Browns, forerunners of the Cardinals, in the 1880s. Comiskey was a choice of the Cardinals’ ownership group.

The three will be inducted on Aug. 27 at Ballpark Village.

He polled more fan votes than Steve Carlton, George Hendrick, Matt Morris and Edgar Renteria, who also were on the ballot.

When Holliday is inducted, several members of the 2011 World Series champions will be on hand, including three who are still playing in Albert Pujols, Yadier Molina and Adam Wainwright. Bench coach Skip Schumaker, also was on that team.

Javier, who is 85 now, hit .346 for 15 World Series games (he played only one in 1964 as he was hurt) and was a two-time All-Star. He started at second base for more years as a Cardinal than National Baseball Hall of Famers Red Schoendienst, Rogers Hornsby and Frankie Frisch.

Comiskey hit .273 for the Browns from 1882-89 and 1891. The Browns won four American Association pennants under Comiskey before the franchise joined the National League in 1892, which is the year the Cardinals’ history began.

Elected to the National Baseball Hall of Fame in 1939, Comiskey played an integral part in the founding of the American League in 1901 and was the sole owner of the Chicago White Sox from 1900 until his death in 1931.

The Cardinals had had five different outfield combinations in the past week with Tyler O’Neill (right shoulder impingement) and then Dylan Carlson (left hamstring strain) on the injured list. A sixth came Friday night with Lars Nootbaar getting a start in right field against Milwaukee right-hander Brandon Woodruff. Nootbaar had been one for three with a home run against Woodruff.

O’Neill, meantime, had three home runs and a .933 OPS against Woodruff for 15 at-bats. But he won’t be of any help to the Cardinals for several weeks.

O’Neill, hitting .195 with 42 strikeouts in 118 at-bats, received a cortisone shot in his shoulder earlier this week. He has has waited for the effects to sink in before he swings a bat and begins to ramp up his throwing program and then a minor-league rehab at either Class AA Springfield (which will be home) or Class AAA Memphis (which isn’t home) next week.

The two-time Gold Glover who also hit 34 homers last season said the impingement might have affected his swing.

“I was starting to feel it my shoulder,” O’Neill said. “And definitely when I was trying to work through it this past week, there was some pain in there.”

He said he had arm pain before but had worked through it. This time, he said, “I wasn’t able to have my full range of motion.”

The imaging done on O’Neill showed some fluid buildup near the rotator cuff and the impingement, too.

“I don’t mind playing through a little pain. I’m sure the majority of us do most of the year, anyway,” he said.

Martinez had been in camp with the San Francisco Giants this spring and, most recently with Boston’s Class AAA team in Pawtucket. He was 0-2 with 20.77 earned-run average in two games covering 4 1/3 innings in which he gave up 10 runs.

“It’s unfortunate ... because you’ve got a guy we’ve known here with a crazy amount of talent,” Cardinals manager Oliver Marmol said. “Obviously, you want to see him exercise every bit of that and I don’t think that’s been the case of late.

“He was a guy that if you stayed on top of him, you got some pretty good stuff out of him. It’s unfortunate to see where he’s at at the moment, especially after that news.”

The lighter side of Carpenter

Then, Carpenter was clean-shaven. He had a full beard for most of his career. With the Yankees, he was wearing a mustache when he hit a home run on Friday night.

“Full shave ... we’ve seen that before,” said Marmol, shaking his head. “The mustache is a better play.”

Arenado, back at his former home, and Pujols, back where he debuted, combine for two homers and seven hits and drive a five-run first inning to back Jose Quintana.

Cards Matt Holliday jogs onto the field for the final time in the ninth inning of the game between the Cards and the Pirates on Sunday, Oct. 2, 2016, at Busch Stadium. Holliday got a standing ovation. Photo by J.B. Forbes, jforbes@post-dispatch.com