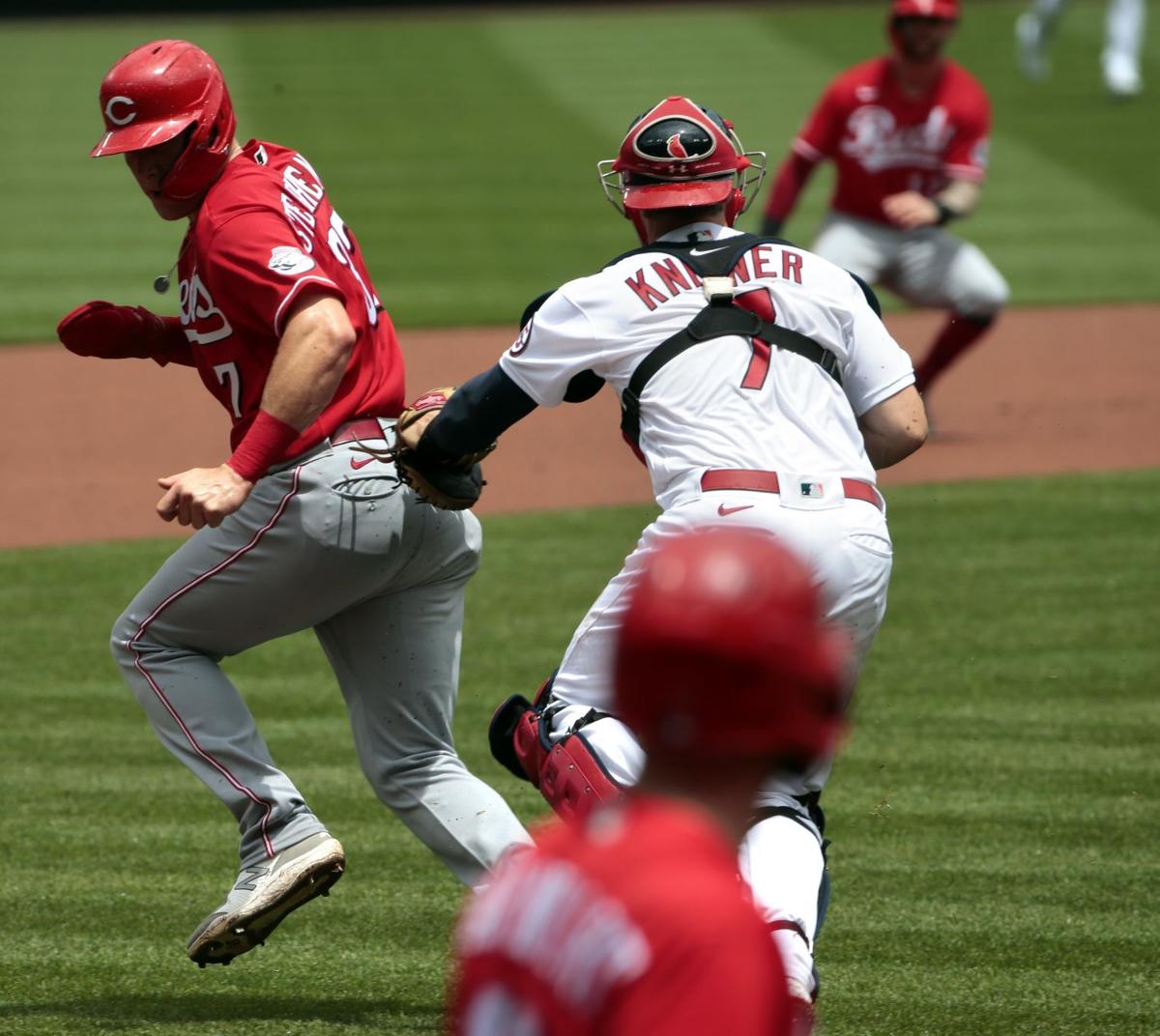 Cardinals catcher Andrew Knizner tags out Cincinnati's Tyler Stephenson  between third base and home plate in the first inning on Sunday, June 6, 2021 at Busch Stadium. Knizner got a double play, throwing to Tommy Edman at second base to get Tyler Naquin. It was the first 5-2-4 double play turned by the Cards since 1969. Photo by Robert Cohen, rcohen@post-dispatch.com

Cardinals catcher Andrew Knizner tags out Cincinnati's Tyler Stephenson  between third base and home plate in the first inning Sunday, then threw to Tommy Edman at second base to get Tyler Naquin. It was the first 5-2-4 double play turned by the Cards since 1969.

Cardinals catcher Yadier Molina, who took a foul ball off his left knee on Saturday, forcing him out of the game in the fourth inning, didn’t play Sunday and will get another day off Monday when the team does not play. But manager Mike Shildt said he didn’t think Molina’s injury would require a stay on the injured list.

“I’ve seen a fair amount of tough guys,” Shildt said. “I’ve grown up in athletics and sports and clubhouses my whole life and this guy is the Alpha of the Alphas.”

While Molina is day to day and was going to pinch-hit in the ninth inning on Sunday, if necessary, backup infielder Max Moroff is season to season. Moroff, who suffered a serious left shoulder injury on a follow-through with his bat while hitting in the indoor cage in Arizona on the Cards’ last trip, will require surgery on Tuesday and will be lost for the season.

Moroff was one for 16 after coming up from Memphis. He will be sidelined for seven months.

Shortstop Paul DeJong (non-displaced rib fracture) grounded out twice in two at-bats as he played in another rehab game at Memphis on Sunday. DeJong, who had a double in five at-bats over two games, will be examined this week after returning to St. Louis, at which time his status for possibly returning for the Cleveland series that starts Tuesday will be determined. Molina also could be playing then.

Reliever Kodi Whitley still is out because of back spasms and Shildt said it would be “five-ish” days before Whitley can pick up a ball.

Lefthanded reliever Tyler Webb, who was designated for assignment by the Cardinals, cleared waivers and was assigned to Memphis. He will be joined by lefthanded bullpenner Brandon Waddell, who was claimed on waivers from Baltimore.

Waddell, 27, has been claimed on waivers by Minnesota, Baltimore and the Cardinals since October. For the Twins this year, he had an 11.25 earned-run average for five innings in four games. He pitched one scoreless inning for Baltimore.

Major League Baseball is said to be ready to inspect pitchers before they come into a game as MLB tries to deal with any illegal substances that might be being affixed to baseballs.

“I think it’s great,” Shildt said. “It’s like the TSA of baseball.

“You’ve got to go in and get checked and make sure you’ve got the right amount of substances. Or none. I think it makes sense. It’s unfortunate it has to come to that but I believe it’s necessary.”

Shildt raised a ruckus in Chicago some 10 days ago when the umpires made Cardinals reliever Giovanny Gallegos change caps because they saw a smudge on its bill. Shildt suggested strongly that there was much more going on with pitchers than smudges on caps.

The Cardinals’ infield turned one for the books with Cincinnati runners at second and third and one out in the first inning Sunday and Eugenio Suarez hitting.

The rest of the infield was in but Nolan Arenado was at normal depth at third base. He fired home anyway after fielding Suarez’s hard grounder. Tyler Stephenson, running from third, skidded to a stop too close to catcher Andrew Knizner, who ran Stephenson down for one out and then, on the run, fired to second baseman Tommy Edman to catch Tyler Naquin, who was trying to get back to second safely. The 5-2-4 double play was the first turned by the Cardinals since 1969.

A real day off — for the players

After playing 17 games in 17 days, the Cardinals don’t have to go to any airports or ballparks on Monday before they start the series here with Cleveland on Tuesday. Speaking of his players, Shildt said, “I hope everybody has a nice, refreshing day with their families. So I hope it brings a smile to the guys’ faces.”

As for the manager . . . he can’t put baseball out of his thoughts.

“I don’t think that’s the luxury I get afforded,” Shildt said. “There’s always series around the corner and decisions to be made. But that’s my job and I’m grateful for it and blessed to have it.”

Matt Carpenter’s pinch two-run double Sunday raised his career average with the bases loaded to .475, on 28 hits in 59 at-bats, good for 86 RBIs. Despite his lowly 2021 average of .161, Carpenter has eight RBIs as a pinch-hitter this season, second to the 10 by Atlanta’s Pablo Sandoval.

• Home-plate umpire Scott Barry had to leave the game when he absorbed a Tyler O’Neill foul tip to the head in the bottom of the fourth. Second-base umpire Dan Iassogna took over behind the plate.

Where are the 2018 champion Memphis Redbirds now? They're crushing in the majors

A look at the lineup manager Clapp fielded, from opening day to the Triple-A championship, show the muscle the Cardinals' organization had and why it's scattered elsewhere.

Oviedo pitches well, but misplays by two veterans and Rizzo's 14-pitch at-bat that resulted in a game-tying homer flip game to Cubs in first day with full capacity at Wrigley.

'I do think we have to engage in that trade market,' executive says.

Sinking feeling: Cubs walk all over Cardinals and spiral out of first place continues, drops them to .500

Five walks in the second turn into a five-run rally, short outing from Gant and the Cubs' 7-5 victory Saturday night. Cardinals have lost 10 of 12.

Hendricks makes his 22nd start against Cardinals and carries a 10-3 record and reputation for quick, short work of the rivals.

Cardinals notebook: Would Redbirds have avoided spree of pitcher injuries if MLB had universal DH?

Also: Molina could return to lineup on Tuesday night.

Veteran catcher may be ready to handle Wainwright against Cleveland on Wednesday. DeJong could be ready for series in Chicago this weekend.

Indians have huge interleague dominance. But, for now, Cardinals aren't beating anybody. It's up to Waino-Molina battery to recharge them.

Cardinals catcher Andrew Knizner tags out Cincinnati's Tyler Stephenson  between third base and home plate in the first inning on Sunday, June 6, 2021 at Busch Stadium. Knizner got a double play, throwing to Tommy Edman at second base to get Tyler Naquin. It was the first 5-2-4 double play turned by the Cards since 1969. Photo by Robert Cohen, rcohen@post-dispatch.com

Cardinals catcher Andrew Knizner tags out Cincinnati's Tyler Stephenson  between third base and home plate in the first inning Sunday, then threw to Tommy Edman at second base to get Tyler Naquin. It was the first 5-2-4 double play turned by the Cards since 1969.