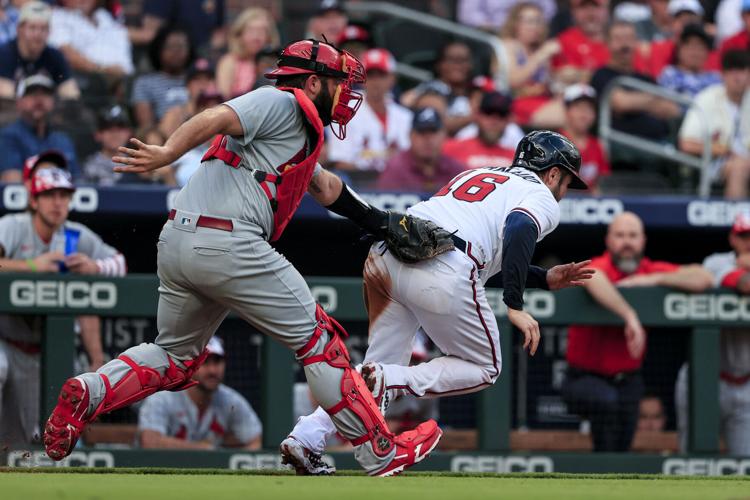 Cardinals catcher Austin Romine tags out the Braves' Travis d'Arnaud as d'Arnaud tries to get back to third base during the second inning Monday, July 4, 2022, in Atlanta. 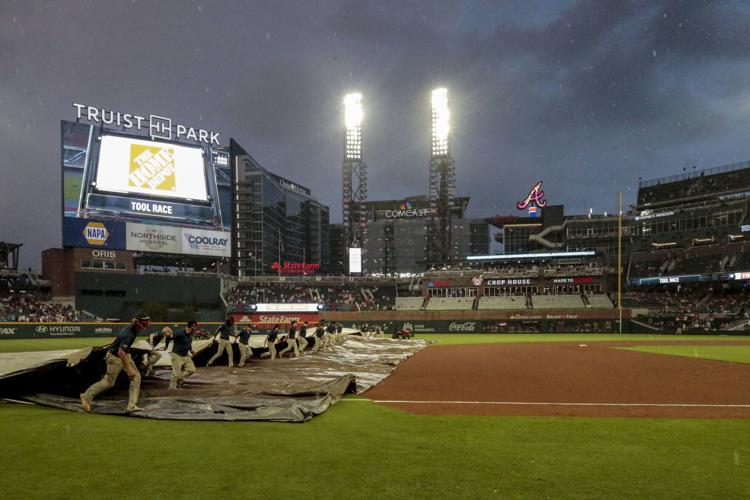 Grounds crew members pull out the tarp as rain begins to fall during the fifth inning Monday, July 4, 2022, in Atlanta. 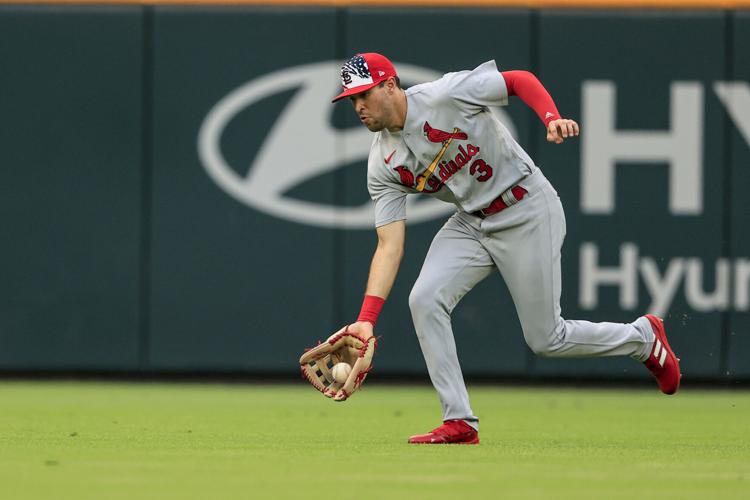 Cardinals right fielder Dylan Carlson fields the ball on a hit by the Braves' Phil Gosselin during the third inning Monday, July 4, 2022, in Atlanta.

ATLANTA — After several weeks of trying the rushed prospect route, the Cardinals are swinging back in the opposite direction to see if experience can provide the production and sturdiness that’s been lacking at catcher for the past month.

The Cardinals returned 22-year-old catcher Ivan Herrera to Class AAA Memphis on Monday and swapped him for Austin Romine, a veteran with nearly 400 games behind the plate in the majors. Romine, 33, started Monday night at Truist Park.

“I think it’s been obvious that we’re not getting the production that we’ve hoped for from that position at the moment,” manager Oliver Marmol said. “Seasoning. Stability. (Romine’s) done it for a while. He understands what it looks like from a defensive standpoint. He does a nice job receiving, framing and blocking. We’ll see what the offense looks like. We think we’re getting a defensive guy who can helps.”

The glove is a good place to start.

The Cardinals do not have a feel yet for when Yadier Molina will return from a knee injury. Molina, who intends to retire at season’s end, has returned home to Puerto Rico to recover from knee pain and inflammation. Contact with the catcher has been over the phone, though Marmol relayed Monday what he’s heard from the nine-time Gold Glove-winner: “He’s working hard, and he’s feeling better.”

In the meantime, the Cardinals had to get better at catcher, behind the plate and, if possible, at it, too. Since June 1, the catcher position has hit .119 for the Cardinals. Only Cleveland had a lower aggregate average for its catchers (.118), and no other big-league teams had catchers hitting below than .168. The Cardinals’ catcher spot had a league-low .196 on-base percentage and a .139 slugging percentage. Without the bounce of offense, the inconsistencies defensively were harder to overlook.

Herrera improved, but his inexperience calling games and scouting opponents became part of the Cardinals’ concerns. Andrew Knizner, the experienced backup, continues to work on his framing of pitches.

“There’s some stuff there that goes along with game-planning and framing that could be helpful,” Marmol said. “So we’re going to take a look at it and see what we’ve got.”

“Bring some calmness,” he said. “Some done it before.”

Romine started the season with the Angels and appeared in three games. He had previously been with the Cubs and Tigers, and he spent parts of eight seasons with the Yankees. The promotion to the Cardinals reunites him with a high school teammate, Nolan Arenado. Romine and Arenado were the first baseball players at El Toro High (Lake Forest, California) to have their numbers — 16 and 12, respectively — retired. The school did so in the same ceremony in 2014. Arenado, a sophomore during Romine’s senior season, recalled the scouts who came to watch Romine were what first gave him the idea it’s possible to be drafted out of high school.

Romine and Arenado played in a high school game against Braves catcher Travis d’Arnaud and “it felt like 100 scouts were there,” Arenado said.

Signed two weeks ago as a minor-league free agent, Romine appeared in six games for the Triple-A Redbirds, hit .318 (7 for 22) and kept an eye on the major-league staff, watching televised games to familiarize himself with arms he did not see in spring but could be called on to catch in summer.

That could be key to how quickly he provides what the Cardinals crave — steadiness.

“Learning curve is a little steep,” Romine said. “That’s why you’re here. Do it at the big-league level and you’ve got to do it quick. You’ve got to make it as comfortable of a change for those guys on the mound as it can possibly be. You want them to hit the ground running even though they’re throwing to a new catcher with a new mindset and a new way of calling games. As long as I can make the transition seamless, that’s what I’m aiming for.”

Rookies provide what signings have not

Of that group of signees, the Cardinals recently designated Nick Wittgren (minus-0.6) for assignment, and T. J. McFarland (minus-0.7), Drew VerHagen (minus-0.6), Steven Matz (minus-0.5), and Corey Dickerson (minus-0.5) are all on the injured list.

The only active free-agent signing is Albert Pujols (minus-0.5).

Contrast that group’s contribution with the collection of rookies who have debuted this season. Four of them — Brendan Donovan, Andre Pallante, Nolan Gorman, and Juan Yepez — have had a positive-WAR impact and combined for 4.6 WAR.

“We’re going to need some of those guys to step up and contribute,” said Marmol when asked if the team needed more from the contributions. “(And) to use some of the guys who have stepped up — the young guys. A combination of that to get to where we need to go.”

Cleared by the medical staff to rejoin the team, Genesis Cabrera did so Monday at Truist Field, and the left-hander will throw a bullpen session there Tuesday to determine his readiness to be placed on the active roster. Cabrera has been on the COVID-related 10-day injured list, and when he returns, the Cardinals will have to make a 40-man roster move.

With the plan to have Cabrera throw Tuesday, the earliest the Cardinals would put him in the bullpen is Thursday.

Tyler O’Neill (torn hamstring) batted third and started in left field Monday night for Class AAA Memphis as he began his rehab assignment. He went 2 for 3 with a double. The Cardinals plan for him to remain with the Redbirds through Tuesday’s off day and then games Wednesday and Thursday before traveling to St. Louis for evaluation Friday. The hope is to have O’Neill back in the big leagues by Saturday at the latest if his rehab games go well.

Matz is set to start Thursday for Memphis at Durham, North Carolina. The lefty will aim for around 60 pitches and four innings, and if that goes well, the Cardinals plan for him to have one more outing in the minors before being scheduled for a big-league start before the All-Star break.

For the first time in his young career, Cardinals switch-hitter Dylan Carlson received a request from the National Baseball Hall of Fame to gives something to their collection.

On Saturday, Carlson hit the fourth home run in the Cardinals’ record back-to-back-to-back-to-back inning in Philadelphia. Carlson followed Arenado, Nolan Gorman, and Juan Yepez to become the first foursome in Cardinals’ history to hit consecutive home runs in a game and the four foursome in major-league history to do so in the first inning. An official from the Hall contacted the Cardinals to ask for the bat that set the record. Carlson’s Marucci bat – model DC3 with natural barrel and black handle – will be part of the permanent collection in Cooperstown, N.Y.

Atlanta pounces for six-run lead against Cardinals starter Hudson, who walks home a run and loses grip on second inning.

Right-hander allows more baserunners (13) than he collects outs (12) as Atlanta scorches him for six runs and holds on for 6-3 victory Monday at Truist Park.

Looking to break their longest losing streak of the year, the Cardinals send their rookie pitcher to the mound in Atlanta. Check out First Pitch for lineups, injuries, and updates.

Pitching crisis? Cardinals need starters to pile up innings, give bullpen a break

Cardinals rotation has an ERA swelling toward 6.00 in its previous 13 starts and has left bullpen exposed to a taxing amount of innings, just like a year ago.

Cardinals catcher Austin Romine tags out the Braves' Travis d'Arnaud as d'Arnaud tries to get back to third base during the second inning Monday, July 4, 2022, in Atlanta.

Grounds crew members pull out the tarp as rain begins to fall during the fifth inning Monday, July 4, 2022, in Atlanta.

Cardinals right fielder Dylan Carlson fields the ball on a hit by the Braves' Phil Gosselin during the third inning Monday, July 4, 2022, in Atlanta.