Subscribe
Read Today's E-Edition
Share This
Cardinals notebook: Spangenberg, happy to be back from Japan, seems headed for Memphis but has left his mark
0 Comments
Share this
1 of 2 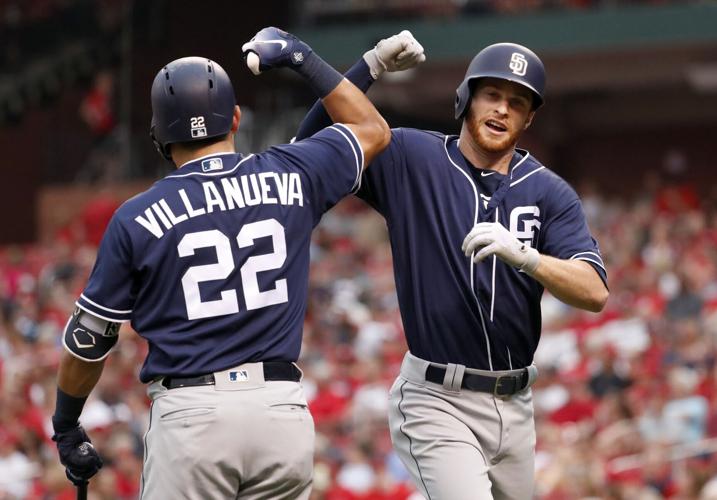 Cory Spangenberg, then with San Diego, is congratulated by teammate Christian Villanueva after hitting a home run against the Cardinals in June 2018 in St. Louis. 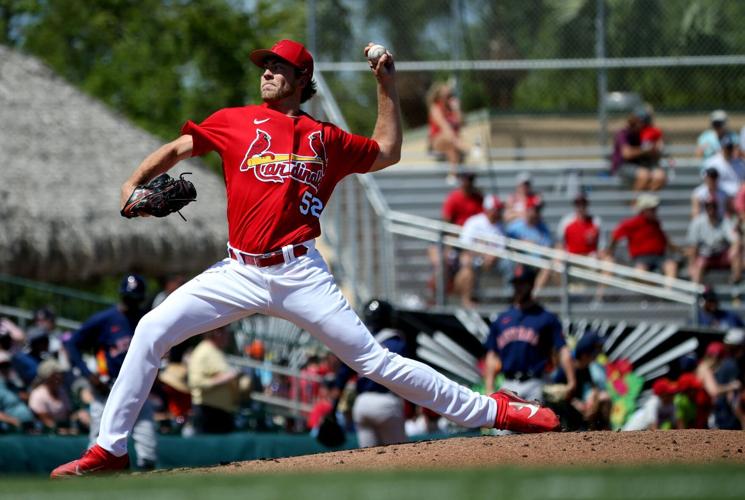 JUPITER, Fla. — Cory Spangenberg, a late arrival in camp, realizes it might be too late to wedge his way onto the Cardinals’ roster in the next couple of days. But he has been dropping calling cards along the way, including a three-double game in which he also stole third base and scored three runs as the Cardinals whipped the New York Mets 7-2 in an exhibition game delayed by rain for 55 minutes on Friday.

Spangenberg, former San Diego and Milwaukee utility man who spent the past two seasons in Japan, is four for eight with six runs scored in varsity games.

“I’m trying to spray the ball — hit it where it’s pitched,” he said.

His next stop, he assumes, though, is Class AAA Memphis.

“I wish I had come here earlier,” said the 31-year-old Spangenberg. “I just have to keep plugging away ... and see what happens this year. I know I came here late. I’m just thankful for the opportunity to come here and be a part of this organization.”

While Spangenberg, on a non-roster deal, might work his way back to the majors, he can’t get too far ahead of himself.

“I’ve done that in the past and I think it’s hurt me. One day at a time,” he said. “I want to try to enjoy it a little more this year than in years past. I’m thankful to be back here in the U.S.”

Spangenberg’s wife, Julie, and daughter, Madison, who was born in Japan in 2020, were unable to visit him there last year because of COVID-19 travel restrictions.

“I saw my daughter grow up through Facetime, so that was hard,” said Spangenberg.

At Memphis, if that’s where he ends up, Spangenberg figures to play a multitude of positions — he played third base Friday. But, when asked what his best position is, said, “At this point in my career, I’ve moved around so much I don’t I necessarily have one anymore. Wherever they put me, I’m serviceable.”

He has even pitched — he’s had two major-league innings. He’s played everywhere but at catcher. That versatility is an asset.

“It’s nice to be able to draw from down below at some point and be able to tap into someone like a Cory,” Marmol said.

Cards survive rain, MetsNew York Mets ace Jacob deGrom was scratched from his scheduled start against the Cardinals because of a stress reaction in his right scapula that could keep him out for a couple of months.

And with rain forecast for the afternoon, Marmol moved most of his regular position players and a couple of starting pitchers to the back fields to play in a minor-league squad game.

Marmol said he had been hoping that the umpires would pull the tarp off the field earlier than they did because he wanted to see young Jake Walsh, who has a good shot at the 15th pitching spot, face more than just the one batter he faced in the third inning before it rained.

Thomas excels againLeft-hander Connor Thomas needed only 16 pitches to retire the Mets in order in the first two innings. In four spring innings, Thomas has allowed just one hit and no runs, pitching primarily in relief after being mostly a starter in the minors.

“(Relief) is something I’m a lot more comfortable with this year,” he said. “It’s good to be in big-league camp this long.”

Marmol said, “There’s nothing overpowering about that kid other than that he knows where it’s going. When we look at the big picture of what we need — our ballpark, our defense, no walks, on the ground, he plays well.”

Afterward, Parker and Liberatore were reassigned to the minor leagues, leaving the Cardinals with 34 players in camp. Before Liberatore departed, Marmol talked to him in his office about being more consistent in the strike zone.

“He needs to be able ... to keep the ball down,” Marmol said. “Lock in pitch to pitch. If he does that, that’s plenty good enough to get outs. It’s a focus thing. Own it.”

“(Woodford) did what you would expect, as far as being on the ground a ton,” Marmol said. “He had a couple of good at-bats against Albert.”

Albert Pujols grounded out twice and flied out against Woodford.

Marmol said he wasn’t all that concerned about Cabrera, at least not now.

“If it’s under the lights (at the start of the season), then, yes,” he said. “But, knowing ‘Cabby,’ there’s more in the tank and it’s a matter of if he wants to tap into it or not.”

Molina on the runYadier Molina stole second base without a throw when Hudson was paying no attention to him.

“I have 69 stolen bases in my career,” said Molina, who had ice bags on both knees before the game. “I’m trying for 70. Does that one count?”

Marmol said the steal was a good play for two reasons.

“One, because his legs are feeling good enough for him to do it. And, then, for Hudson to wake up,” Marmol said.

Gorman not playingInfielder Nolan Gorman, who had been sent to Memphis earlier in the week, wasn’t brought over to play with the big-league team, or to play with Memphis on the back field. He had been scratched because of a tight back before a game five days ago and Marmol didn’t know if Gorman still was compromised.

“Our conversation with him wasn’t so much to come back and get a pinch hit here or there,” he said. “He needed to go down and get work in.”

Gorman, the top hitting prospect in the system for a couple of years, was two for 16 with seven strikeouts and no walks this spring.

Edman, Gorman, Donovan have thrived at shortstop and second base, respectively.

Standings remain the same, but changes afoot for Cardinals after loss to Brewers

Starter Hudson allows two homers that tilt the game toward Milwaukee, but 6-4 loss also include reminder of continuing renovations to the bullpen.

Media Views: No TV for Cardinals-Cubs game Friday, which will be streamed only on Apple

Friday is the biggest Cards game to date to be shown exclusively on Apple TV+.

Notebook: Cardinals place Cabrera on IL although he is not injured

Right-hander made 19 starts, one shy of the major-league record to begin a career without a win, but has renewed confidence, new role in win vs. Brewers.

Quick Hits: Cardinals lose twice as Flaherty is hurt and Cubs rally for 6-5 win in 10

After two choppy but scoreless two innings, Flaherty's outing ended abruptly when he felt like 'nothing' was coming out of his hand in loss to Cubs.

First Pitch: Flaherty and Bader placed on injured list ahead of series opener with Miami

The Cardinals begin a swing through the NL East with a series against the Miami Marlins. Check out First Pitch for lineups, injury updates and more.

Cory Spangenberg, then with San Diego, is congratulated by teammate Christian Villanueva after hitting a home run against the Cardinals in June 2018 in St. Louis.