In 12 starts after arriving from the Pirates in a trade, Quintana went 3-2 with a crisp 2.01 ERA to stabilize the rotation. He pitched five or more innings in nine of those starts and allowed two runs or fewer in each game he pitched for the Cardinals. Then Quintana blanked the Phillies for 5 1/3 innings on two hits in his Game 1 playoff start. He was a great fit for a team that features an array of Gold Glove fielders while playing in a pitcher-friendly ballpark.

This season he finally got back to full strength while moving closer to his excellent 2018 form. Mikolas deserved better than a 12-13 record with his 3.29 ERA. He was 6-3 with a 2.38 ERA in 14 starts in Busch Stadium. He finished the regular season on a strong note, posting a 2.38 ERA in his last six outings (which included five starts). Mikolas was just OK in his playoff start while allowing two runs on four hits in just 4 1/3 innings.

He, too, bolstered the rotation after arriving before the trade deadline. Montgomery went 6-3 with a 3.11 ERA in 11 starts after coming from the Yankees in the deal for outfielder Harrison Bader. He was especially sharp in August while posting a 1.76 ERA in five starts for the Cardinals. He suffered a rough three-start stretch, allowing 15 runs (13 earned) in 14 1/3 innings, before getting back on track. Montgomery worked in relief in the playoffs, walking three batters (one intentionally) and allowing two hits in 2 2/3 scoreless innings.

Finishing 11-12 with a 3.71 ERA in 191 2/3 innings pitched is a solid achievement for a pitcher turning 41 years old. And he was flat-out excellent for five months before fading with a 2-3 record and a 7.22 ERA in his last six starts. His lost velocity and diminished pitch movement sidelined him for the two Cardinals playoff games. Wainwright blamed his downturn on a knee issue that shortened his stride to the plate — a mechanical glitch that went unaddressed through September into October.

He arrived for spring training with a bad shoulder and he battled soreness throughout the season while going 2-1 with a 4.25 ERA in just nine appearances, including eight starts. He met the quality start metric in his last two starts of the season, striking out 15 batters while allowing four runs in 12 innings. Flaherty made the playoff roster as a reliever but did not appear against the Phillies. He has one more season of arbitration eligibility before reaching free agency, so 2023 could be a pivotal year for him.

His comeback from Tommy John surgery came in fits and starts. Hudson posted a 2.76 ERA in his first 11 games despite producing some grim underlying numbers. His luck ran out through the middle of the season and was even sent back to Triple-A Memphis for some remedial work. There Hudson was forced to work against the minor league pitch clock and quicken his ponderous pitching pace. He finished 8-7 with a 4.45 ERA in 26 starts and one relief appearance. He struck out just 78 batters and walked 61 in 139 2/3 innings

His four-year, $44 million free-agent contract didn’t offer much of a payoff in Year 1. Matz struggled with a sore shoulder, then he suffered a knee injury on a weird fielding mishap. He was 5-3 with a 5.25 ERA overall and he produced an ugly 5.70 ERA in his nine starts. Late in the season the Cardinals brought him back as a reliever to shorten his recovery time from the knee injury and he did fine in that role, registering a 1.69 ERA in six appearances.

He went 2-2 with a 5.97 ERA in nine games, including seven starts. But the Cardinals managed to win seven of his rookie appearances, so his first big league exposure wasn’t all bad. Liberatore flashed his mid-90s fastball and his big breaking pitch, but failed to consistently miss bats both in the major leagues and down at Memphis — where he was 7-9 with a 5.17 ERA in 22 starts. He will be just 23 entering next season, so he still has time to figure it out.

His All-Star season ended in nightmarish fashion with his Game 1 implosion against the Phillies, which due in part to the strained middle finger on his pitching hand. But Helsley ranked among the National League’s top relievers during the regular season while building a 9-1 record and 19 saves in 23 tries. He earned seven holds, posted a 1.25 ERA and struck out 94 batters in 64 2/3 innings. He inherited 21 runners and allowed just three to score while routinely topping 100 miles per hour with his fastball.

He spent much of the season trapped on the Memphis-St. Louis shuttle despite performing well whenever he got his chance for the Cardinals. Woodford finished 4-0 with a 2.23 ERA in 27 appearances of mostly low-leverage relief work. During his latter stints with the team from August on, he posted a 1.63 ERA in 16 outings. Overall he allowed just three of his 13 inherited runners to score. The Cardinals cycled through a long list of less effective relievers before figuring out that Woodford was reliable.

Like a lot of Cardinals, he would like to forget Game 1 of the playoffs against the Phillies. He got the ground balls he wanted, but not the end result in the ninth inning. But Pallante enjoyed an excellent rookie season overall. He provided the glue for the bullpen in the regular season, going 3-2 with a 2.35 ERA and nine holds in 37 games as a reliever. He inherited 23 runners and allowed nine to score. As a starter, he was just OK: He finished 3-3 with a 3.98 ERA in 10 tries as a rotation fill-in.

After moving from starting pitching to relief pitching, he picked up extra fastball velocity and finally earned regular big league work. In 21 games coming out of the bullpen, the rookie left-hander was 1-1 with one save and a 0.91 ERA. Overall Thompson held left-handed batters to a .146 batting average and .372 OPS. He will need to sharpen his control, since he walked six batters over 10 2/3 innings in his last nine outings of the season.

He finished well while sharing the set-up and closing duties with Helsley. Overalll he was 3-6 with 14 saves in 20 tries, 12 holds and a 3.05 ERA. He inherited 11 runners and allowed five to score. One bad outing against the Mets (two batters retired, four runs allowed on April 25) left a mark on his season statistics. Gallegos was better in the second half of the campaign after getting additional rest. He posted a 1.96 ERA in his last 23 outings.

He added valuable relief depth after arriving from Pittsburgh in a trade. He went 5-0 with a 2.78 ERA in 20 games in the STL after posting a dismal 5.09 ERA in 40 Pirates games. Stratton had rough outings in his third and fourth appearances for the Cardinals — allowing five runs (four earned) on 11 hits in 2 2/3 innings — before settling in to give the team another reliable option. He improved his ground ball rate (from 39.2% to 51.3%) after changing teams.

His comeback from Tommy John surgery wasn’t smooth, but ultimately he regained full arm strength and found his bullpen niche. Hicks tried to return as a starting pitcher and that did not go well; he went 0-4 with a 5.47 ERA in eight starts while building up his pitch counts. After additional recovery, he went 3-2 with eight holds and a 4.37 ERA in 27 relief outings. In his last nine regular season outings he struck out 14 batters while allowing three runs in 12 2/3 innings. Hicks capped his season with two scoreless playoff relief appearances against the Phillies.

He was terrible as a fill-in starting pitcher, going 0-2 with a 10.29 ERA in three tries. Naughton was much better as a lefty specialist in relief (0-0, one save, three holds, 3.23 ERA in 23 games). He held left-handed hitters to a .163 batting and a .477 OPS while assuming the role T.J. McFarland once filled. Overall Naughton inherited 17 runners and allowed just five to score. He also produced a 50 percent ground ball rate on balls in play.

He added some relief depth from the left side after arriving from Philadelphia in the Edmundo Sosa trade. He posted a 3.77 ERA in 15 outings here while looking fully recovered from Tommy John surgery. One bad game against the Brewers (three runs allowed, no batters retired) skewed Romero’s numbers. He allowed just three runs in his other 13 Cardinals appearances combined.

He pitched his way back to Triple-A Memphis with his second-half fade. In his last 14 big-league appearances he allowed 15 runs on 18 hits and eight walks in 13 innings. His fastball lost velocity and bite, allowing opponents to hit .371 against him in August. Cabrera had been outstanding during the first half of the season, going 3-1 with a 2.60 ERA while serving as the primary weapon against left-handed pitching. Overall he was 4-2 with 13 holds and one save, but his season ERA climbed to 4.63.

In his first five games hopping off the Memphis-St. Louis shuttle, Naile pumped strikes in his low-leverage role. He threw 6 1/3 scoreless innings with four strikeouts and no walks. Ah, but his next two outings brought a reality check: Naile allowed five runs on six hits (including two homers) and two walks in three innings. That added a bitter aftertaste to his big league cup of coffee.

During a disastrous span of four appearances in May and June, Whitley allowed seven runs on seven walks and six hits in just 3 1/3 innings. That abrupt downturn landed him back at Triple-A Memphis for the duration of the season. Overall he finished 2-0 with a 5.68 ERA in 14 games at the major league level and 1-0 with a 3.86 ERA in 30 appearances in the minors.

His tenure with the Cardinals ended after a rough July. In seven innings, he allowed 15 hits, walked seven, hit a batter and threw a wild pitch while allowing six runs (five earned) in the eight outings. That wild streak earned him a ticket back to Triple-A Memphis and, eventually, forced him off the 40-man roster as well. He resurfaced with the Pittsburgh Pirates after finally running out of time in the STL.

His grade is incomplete, but the “I” could stand for injury or impingement. He was 3-1 with a 6.65 ERA in 19 relief appearances between his stints on the injured list with shoulder and hip issues. VerHagen produced some intriguing metrics while pitching in Japan, but his impressive spin rates did not translate to big league success. He needed to trust his stuff and pitch more aggressively to survive on this side of the Pacific. 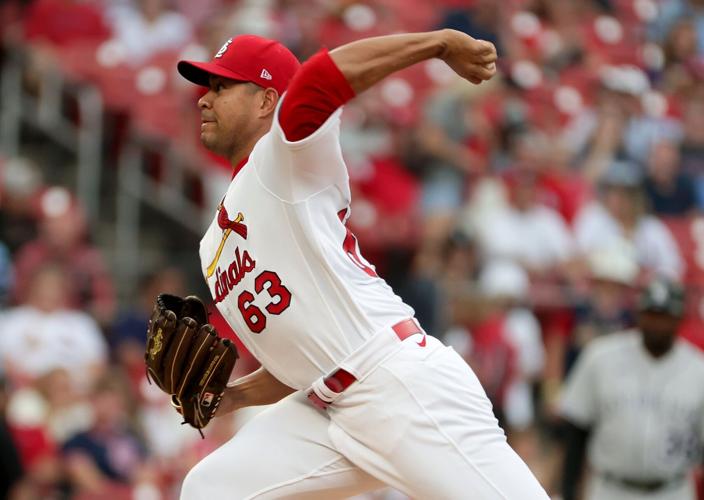 St. Louis Cardinal pitcher Jose Quintana throws on Tuesday, Aug. 16, 2022, in the first inning of a game against the Colorado Rockies at Busch Stadium in St. Louis, Mo. Photo by Christian Gooden, cgooden@post-dispatch.com 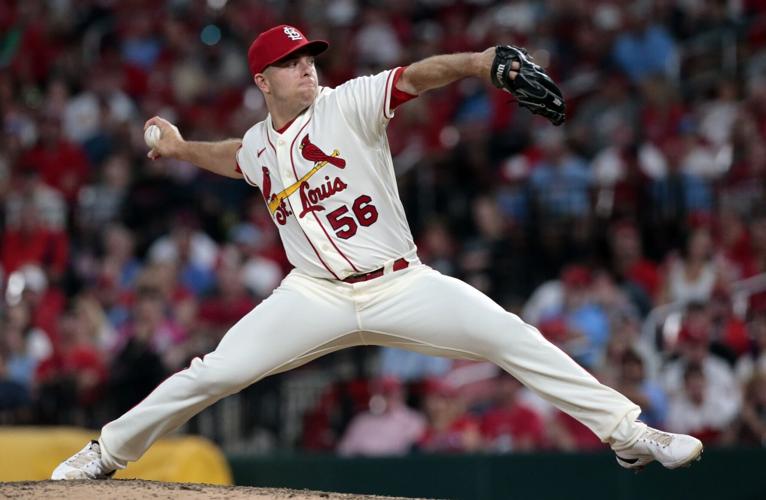 St. Louis Cardinals pitcher Ryan Helsley works the ninth inning against the Cincinnati Reds on Saturday, Sept. 17, 2022 in the second game of a doubleheader at Busch Stadium. Photo by Robert Cohen, rcohen@post-dispatch.com