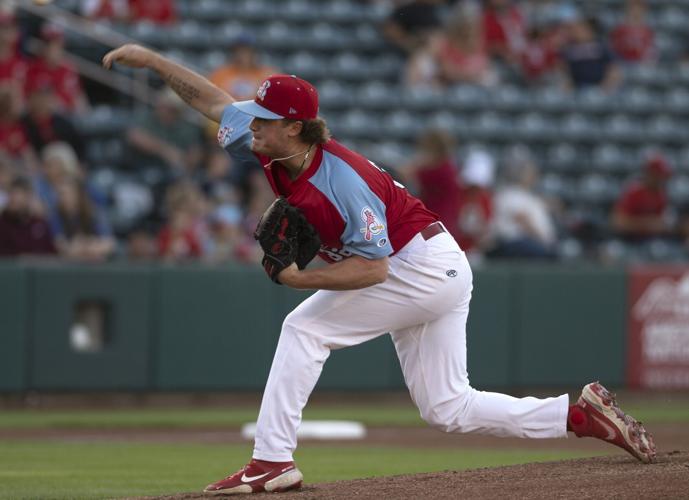 Springfield's Gordon Graceffo pitches in a game on Thursday, June 2, 2022, at Hammons Field in Springfield, Mo. 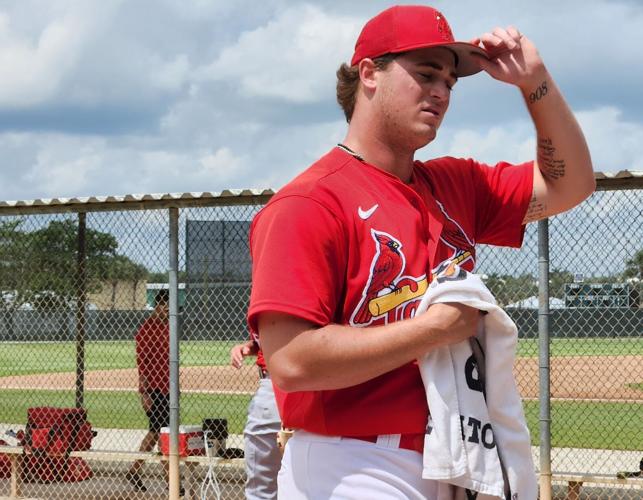 Cardinals prospect Gordon Graceffo has a 100-mph fastball to go with a curveball, slider, and a changeup that still is developing.

Once the possibility of a career in baseball became a realistic path for Gordon Graceffo, a new mentality was forged around the time the New Jersey native was in high school. It’s a mentality that the 22-year-old has carried with him into the minor leagues and one that has kept him from dwelling on the past for too long.

”That was something that was instilled in me pretty young,” Graceffo said. “It was always (on to) the next thing regardless if you failed or had success ... because (in) baseball everything happens so fast. You kind of have to move on to the next pitch.”

On the heels of a season that began with Graceffo as the “sensation” of Cardinals minor-league camp when he flashed improved fastball velocity that touched 100 mph and ended with honors as the organization’s minor-league pitcher of the year, the right-hander again is looking to move on to the next phase beginning next spring.

“I would love to be able to come in and be able to prove myself. Prove that I belong with the big-league squad,” Graceffo said. “Whether I start there or not, it doesn’t really matter. But I know that wherever I start, I’m going to have success and hopefully I’m able to make it up there at some point.”

To do that, Graceffo is back to where his preparations for 2022 began — in New Jersey at the same facility in which he worked to help raise his fastball velocity to triple digits a winter ago.

“It’s just kind of maintaining weight, getting stronger, getting faster,” said Graceffo, who is training at Annex Sports Performance, in Chatham. “Just kind of building on everything that I worked so hard to do last year and just kind of fine-tuning everything, staying consistent with everything, and getting back on my program.”

What Graceffo is seeking to build on is a season in which he finished with a 2.97 ERA, 139 strikeouts, and a 0.94 WHIP over 139⅓ innings after spending time in Class High A Peoria and Class AA Springfield. Compared to all minor-league pitchers this year, Graceffo — a fifth-round pick from Villanova University — finished tied with teammate Michael McGreevy for the seventh-lowest walk rate (5.1%), eighth in WHIP and seventh in strikeouts-to-walk ratio (4.96).

“The fact that his walks were able to stay down was a bonus, right?” Cardinals senior minor league pitching coordinator Tim Leveque asked. “And it’s not always like that with pitchers, right? Sometimes you try to gain velocity and ... you’re going to sacrifice control a little bit. The fact that he was able to gain that velocity but still not walk very many guys was obviously impressive. I mean, it was something that we were very happy to see.”

Joined by fellow Cardinals minor-league pitcher Chris Gerard and some former teammates during his time at Villanova, Graceffo’s training regimen in the leadup to next season is one that is synchronized with how much time is left before he needs to report to Jupiter, Florida.

Graceffo’s lifting and throwing programs will ramp up as the days go by and spring nears. It is a process he said he’ll be able to “feel out” how much time is left before he needs to head south as he looks to follow up on a successful season that had its ups and downs.

”I’m definitely looking forward to going back. Definitely counting down the days,” he said.

After Graceffo began this past season in Class High A, in which he struck out 56 batters in 45⅔ innings and held a 0.99 ERA, he was promoted to Class AA before the end of June. Facing more advanced hitters, Graceffo posted a 3.94 ERA in 93⅔ innings. His strikeout rate dipped from 33.9% in Peoria to 21.9% in Springfield, according to FanGraphs.

Graceffo was placed on a pitch count toward the end of the Class AA season because of the wears of his increased workload as a starter. He said the limitations were “good for my experience and for my health” as it helped him regain some velocity with his pitches and led to 16⅔ scoreless innings and 22 strikeouts in his final three starts.

“The fact that Gordon was able to sprint through the finish line … I think it just highlighted his competitiveness,” Leveque said. “And if you’re in St. Louis, and our goal every year is to win the World Series, you’re pitching till the end of October. And so you got to get comfortable finishing the season strong in the minor leagues to understand that. I think as an organization, all of our guys understand that.”

Graceffo’s blazing start in Peoria was one that Leveque said showed the Cardinals that he was “ready for the challenge” of Class AA.

Come spring, Graceffo has his sights on a similar process.

“It’s an honor that I’m in the position that I am and it’s great to be able to hold your future basically in the palm of your hands like everything’s up to you,” Graceffo said. “And you kind of have to put your head down and work. You can’t really get complacent and think about all that you could accomplish because I mean, you haven’t really done it yet.

”But I’m just trying to keep my head down and work as hard as I can and put myself in the best position for success.”

Former birds on the move: Here is where some past Cardinals are heading this winter

With free agent signings and trades continuing to be made across Major League Baseball, here's a look at where some notable former Cardinals a…

Springfield's Gordon Graceffo pitches in a game on Thursday, June 2, 2022, at Hammons Field in Springfield, Mo.

Cardinals prospect Gordon Graceffo has a 100-mph fastball to go with a curveball, slider, and a changeup that still is developing.