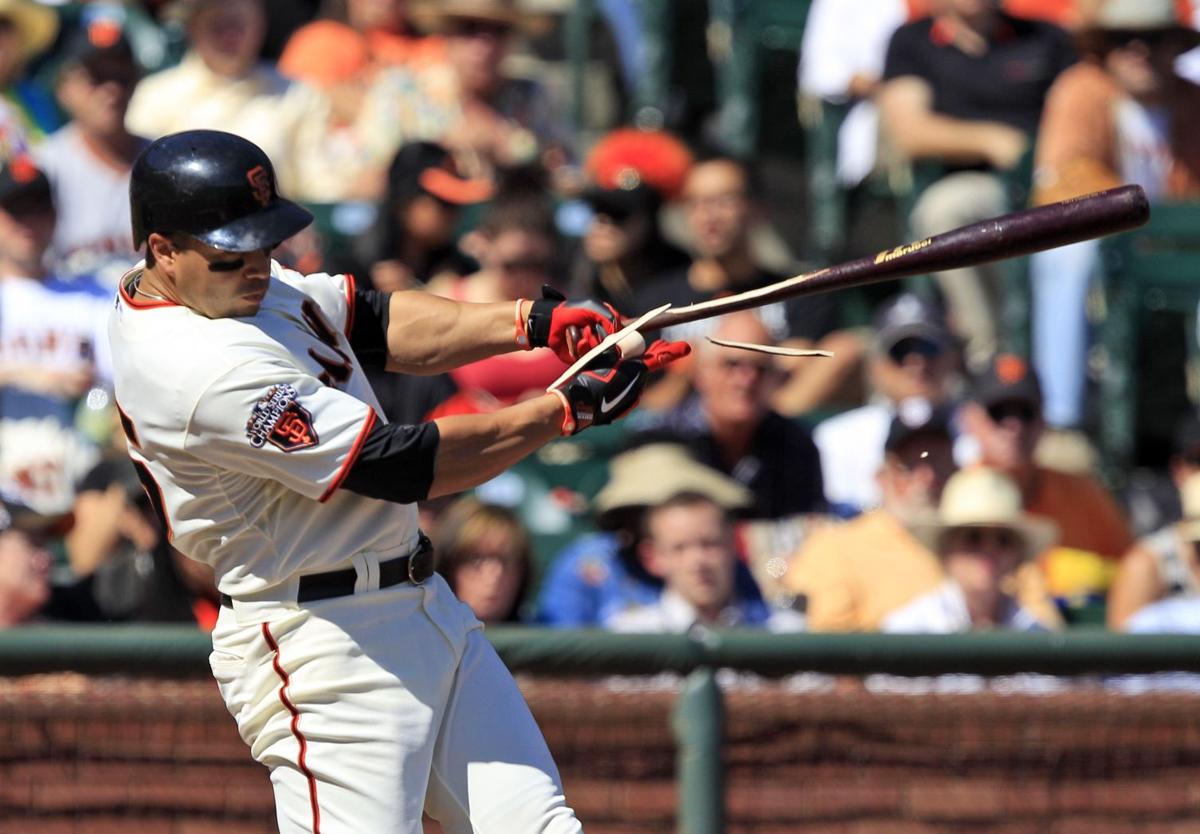 San Francisco Giants' Carlos Beltran breaks his bat as he grounds out against the Colorado Rockies during the fourth inning of a baseball game in San Francisco, Wednesday, Sept. 28, 2011. (AP Photo/Marcio Jose Sanchez) 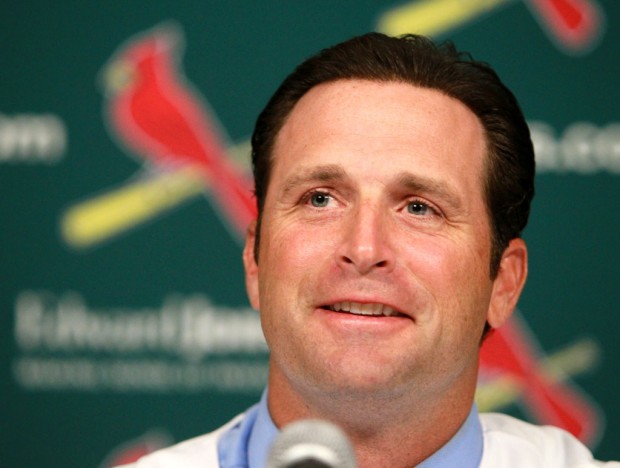 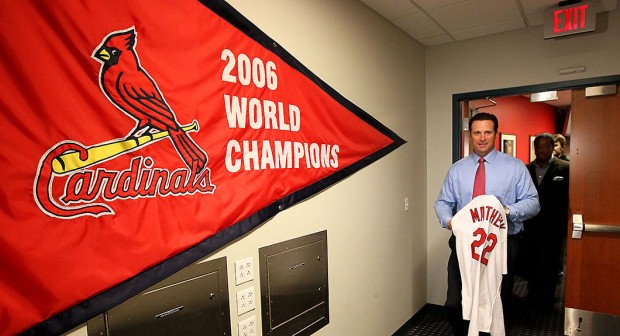 Mike Matheny walks into the clubhouse for the first time after being introduced as the new St. Louis Cardinals manager Monday, Nov. 14, 2011, at Busch Stadium in St. Louis, Mo. Photo by Chris Lee, clee@post-dispatch.com

As he settles into his new career, Cardinals manager Mike Matheny rarely is far from a yellow legal pad to jot notes on, and for more than a month now he's been sketching out different lineups that he could use next season.

Until a few weeks ago, he always knew where to start, penning Albert Pujols into the No. 3 spot and working from there. Pujols now is part of another manager's scribbles. But in the past week or so, Matheny has been writing a new name into his musings. He put Carlos Beltran in the No. 3 spot. He took a look at Beltran in the cleanup spot. He put the All-Star at No. 2.

Matheny made his lineup, checked it twice.

On Thursday, he got his gift.

"With Carlos, I think that term 'flexibility' keeps getting used," Matheny said. "So, I'll ride with that."

Beltran, a switch-hitting outfielder, agreed to a two-year, $26-million deal with the Cardinals on Thursday night.

Matheny spoke with Beltran that night about the clubhouse, the team and, yes, the lineup. He asked the longtime No. 3 hitter about hitting second, ahead of Matt Holliday and Lance Berkman. He described to him a new look to the middle of the order.

Four seasons after the fall of the MV3, the Cardinals will enter 2012 with a new trio of former All-Stars and heralded hitters at the heart of the lineup. Beltran and Berkman, former Houston teammates, and Holliday have a combined 17 All-Star appearances and nine top-five MVP finishes. Last season, Berkman, Holliday and Beltran were three of only five NL outfielders who finished the season with an OPS (on base plus slugging percentages) better than .900.

"You see what a guy like Lance did last year, the career he's had and where he finished in the MVP vote (seventh)," Matheny said. "Carlos has been in that MVP conversation before. Matt, well, there's going to be many of those ahead for him. It's all there in potential. It's all there in their careers. But they also all understand that it's about what's ahead."

The Cardinals pursued Beltran because he could start in right field, spell Jon Jay in center and, given health, help ignite a lineup lacking Pujols.

Like the front office that expressed its interest in Beltran with a no-trade clause, Cardinals players surveyed the available free agents and saw how Beltran fit their needs, and their wishes. He's a third switch hitter to bat in the top half of the lineup. Berkman left Beltran a message advocating the Cardinals. Holliday has known Beltran only as an opponent but traded text messages with the switch hitter as he decided among the Cardinals and at least four other clubs.

Holliday said, "I think that he was the one guy who you look at the free-agent market and could say how he really fit well with what we're doing. You don't replace Albert, because it's impossible to replace the best hitter of the era, but by adding Beltran, you get a player who is confident in the postseason and is going to (impact) the lineup. You add another guy to a lineup that will hit doubles and home runs and get on base. Not as often as Albert. But we're going to have potential."

Holliday and Matheny, when asked, both suggested that the composite OPS stat offers a fair snapshot of a hitter. A hitter's OPS is his on-base percentage added to his slugging percentage, and better than .900 is elite.

Last season, the Cardinals' offense led the NL with a .341 on-base percentage and a .766 OPS. Three Cardinals ranked in the top 10, with Berkman (.959) and Holliday (.912) cracking the top seven. Allen Craig would have made the top seven, at .917, but he didn't have enough plate appearances to qualify. Beltran was ninth at .910.

Since 2004, the year Beltran came to the NL, Berkman, Holliday and Beltran rank first, second and fourth respectively in total OPS among outfielders with at least 750 games played.

"That is something that could be our calling card," Holliday said. "We have a few guys close to .400 (on-base percentage) and some young guys in Craig and (David) Freese who are going to improve. I think our lineup is deep, and it's important in the NL to go one through eight with tough outs."

Matheny first met Beltran shortly after Kansas City drafted the Puerto Rico native in 1995. The Cardinals' new manager remembers him as the young, budding talent who followed in Bernie Williams shadow to learn from the Yankees' center fielder.

Matheny said it was clear Beltran was 'something special." He saw that first hand in 2004, when Beltran had a transcendent postseason. Matheny started six of the seven games in the 2004 National League championship series, when Beltran hit .417 and scored12 runs.

That was also the heyday of the MV3 — the nickname given Pujols, Scott Rolen and Jim Edmonds before they finished third, fourth and fifth in MVP voting that season.

While the new middle order is also built from three decorated hitters, the Cardinals had the MV3 when they were ascendant. Pujols was entering his prime, Rolen was in his and Edmonds was the oldest at 34. Berkman and Beltran will both be older than that in 2012, and Holliday, the youngest, turns 32 in January.

Berkman and Beltran have been slowed by knee surgeries in the past two years, and Matheny is already plotting time off for the veterans to maximize their health. It takes at-bats to contribute OPS.

The new manager said the Cardinals' run of three World Series appearances and two championships has had a common lineup theme "revolving around some thump in the middle."

The club's past is the highly regarded MV3.

The future is three hitters with highly regarded pasts.

Cards are a good 'fit' for Beltran

Newest Redbird thinks he can be productive at bat and in helping with teammates.

Beltran was 'Just Scratching the Surface'

A look back at a 2004 profile in the Post-Dispatch on Carlos Beltran, a postseason juggernaut.

World champ Cardinals were, by one measure, the worst baserunning team in the majors.

Six years after the Cardinals rode a trio of elite hitters to back-to-back 100-win seasons and a National League pennant, the franchise has re…

It's entirely possible, even probable. Good health permitting, of course.

Bernie: No replacing Pujols, but Beltran is a good pickup

If Carlos Beltran can still play some in center field it will be a huge plus for Cardinals.

Cards Talk: Fans sound off about the team's struggles

San Francisco Giants' Carlos Beltran breaks his bat as he grounds out against the Colorado Rockies during the fourth inning of a baseball game in San Francisco, Wednesday, Sept. 28, 2011. (AP Photo/Marcio Jose Sanchez)

Mike Matheny walks into the clubhouse for the first time after being introduced as the new St. Louis Cardinals manager Monday, Nov. 14, 2011, at Busch Stadium in St. Louis, Mo. Photo by Chris Lee, clee@post-dispatch.com