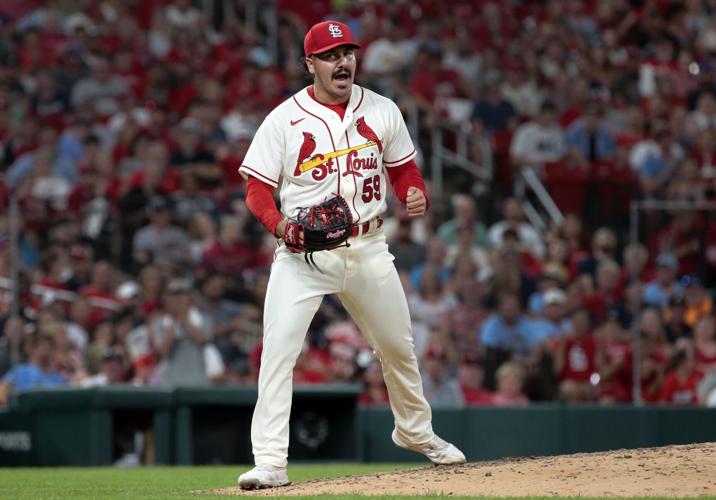 Cardinals relief pitcher JoJo Romero celebrates after striking out the final two batters to end the sixth inning against the Braves on Saturday, Aug. 27, 2022, at Busch Stadium.

The Cardinals’ Brendan Donovan slides into home off a single by Nolan Arenado in the sixth inning against the Braves on Sunday, Aug. 28, 2022, at Busch Stadium. 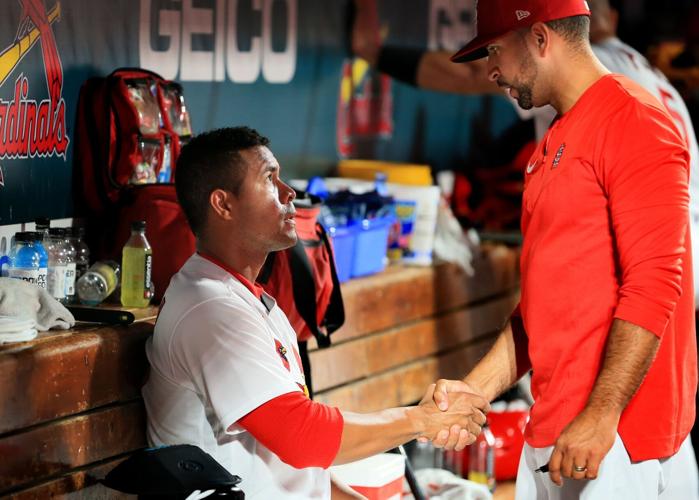 Cardinals starting pitcher Jose Quintana and manager Oliver Marmol shake hands after Quintana was taken out of the game in the sixth inning against the Cubs at Busch Stadium on Thursday, Aug. 4, 2022. 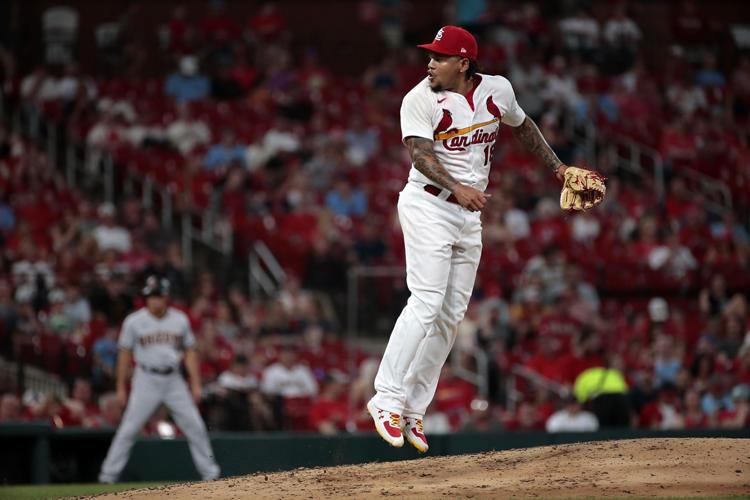 The Cardinals' Carlos Martinez celebrates after striking out the Diamondbacks' Josh VanMeter in the fifth inning of a game at Busch Stadium on Tuesday, June 29, 2021.

Much to the consternation of Cardinals fans, their heroes were a middling 50-44 at the All-Star break this season, just slightly above their 44-46 record last season before the break. But a run of 26-11 since the break this year has vaulted the Cardinals into a large lead in the National League Central Division, akin to the Cardinals capturing a wild-card spot last year after finishing 46-26, including a winning streak of 17 games in September.

What is different this year, however, is the roster. Of the 28 players who will be on it Friday night when the Cardinals open a three-game set here with the Chicago Cubs, only 13 Cardinals were on the active roster at this time last season.

Just four of them are pitchers — Adam Wainwright, Miles Mikolas, Giovanny Gallegos and the rediscovered Jake Woodford, who was a mainstay in the September run of last year.

The manager is different — Oliver Marmol rather than Mike Shildt. But the hitting coach and president of baseball operations are the same in Jeff Albert and John Mozeliak. And, at least for the moment, there is little of the caterwauling often heard concerning the extensions of their employments.

Yes, the Cardinals’ batsmen managed to go nothing for 17 with men in scoring position against a mediocre, ragged Reds staff on Wednesday. But the Cardinals’ offense ranks third among the 30 teams in the majors in OPS at .759, fifth in batting average at .258 and tied for sixth in home runs at 164.

While the Cardinals rank ninth in most walks, they rank 24th in most times struck out.

From the front office side, yes, Mozeliak whiffed on his off-season signings of pitchers, most of them relievers. Left-hander T.J. McFarland, who was re-signed after an effective 2021 second half, has come and gone to Memphis. Nick Wittgrean has come and gone. Aaron Brooks is at Memphis, and Drew VerHagen is on the injured list and out for the season.

Left-handed starter Steven Matz has been on the injured list for much of the season although is staging a late rally. There is time for a course correction for Matz, who will have three years remaining on a four-year, $44 million deal.

But Mozeliak rebounded strongly with the August acquisitions, for little or no immediate cost, of left-handers Jordan Montgomery and Jose Quintana.

Montgomery, who on Friday night here will face the Chicago Cubs, whom he blanked 1-0 recently in Chicago, is 4-0 and the Cardinals are 5-0 in his starts. Quintana has had trouble with length lately, but in his six starts, the Cardinals are 5-1 and he hasn’t given up more than two earned runs in any of them. The Cardinals also got durable right-handed reliever Chris Stratton in the Quintana deal.

A swap Mozeliak made just before those two has helped stabilize a shaky left-handed relief side of the Cardinals’ bullpen. At the expense of backup infielder Edmundo Sosa, the Cardinals obtained from Philadelphia JoJo Romero, who has pitched five innings and allowed one bunt single.

On the position player side, Mozeliak really made only two off-season signings, both ostensibly for designated hitters in Albert Pujols and Corey Dickerson. Together, the pair has 20 homers and 65 runs batted in. Pujols, 42, carried the club on occasion in its torrid 22-7 August, and Dickerson, 33, set a club record for the post-expansion era with 10 consecutive hits.

Cardinals designated hitters rank 10th among the 30 clubs in batting average at .258, eighth in OPS at .787 and fifth in homers at 24. Ironically, Pujols and Dickerson have been more effective when they’ve actually been in the lineup as Pujols, a .269 hitter overall, has hit only .244 as a DH and Dickerson, hitting .280 for the season, is at just .220 as a DH.

They rank third in relief wins at 35. On the downside, the Cardinals rank only 26th in most strikeouts by their staff, putting more pressure on their elite defense to get its pitchers out of trouble.

The Cardinals lead the National League in fewest errors at 56 and in double plays turned and probably are the first team this season to play a five-man infield twice in an extra-inning contest and get out of difficulty both times, with a ball not leaving the infield.

Before Thursday night’s Milwaukee game at Arizona, the Cardinals’ magic number both for winning the division and making playoffs was 27, given that the Brewers are fourth in the wild-card chase, with only three teams to make the post-season field as wild cards.

The Cardinals have 31 games remaining, 17 at home. There are three players to watch more closely than any others the rest of the way. One is right-hander Jack Flaherty, whose second attempt at jump-starting his season will be on Monday here against Washington after a batch of five minor-league rehabilitation starts to test the strength and durability of his right shoulder.

Another is left-handed reliever Genesis Cabrera, an important part of the back end of the Cardinals’ bullpen for the past two seasons who was inconsistent and sent to Memphis, where he struggled in his first minor league outing.

The third is center fielder Dylan Carlson, who cannot sit for the rest of the season. When he’s not playing, the overall outfield defense isn’t as good because it takes two-time Gold Glover Tyler O’Neill out of left field. When Carlson is playing, the Cardinals are likely to have Dickerson or even Pujols available on the bench rather than having them both as regulars. This would enable them to play valuable utility man Brendan Donovan in the infield, where he seems more comfortable, than in the outfield.

Despite the high-ranking offensive numbers, defense still is where the Cardinals hang their hats.

Pending the removal of Flaherty from the 60-day injured list and the potential recall of right-handed-hitting slugger Juan Yepez early next week when his 10-day option expires, the Cardinals filled their 27th and 28th spots on their Sept. 1 roster. They recalled right-handed reliever James Naile from Memphis and selected the contract of outfielder Ben DeLuzio, who was born in St. Louis but lived here for only a year.

The 29-year-old Naile, from Cape Girardeau, Missouri, has pitched six scoreless innings in five outings earlier for the Cardinals. The right-handed-batting DeLuzio, a 28-year-old product of the Arizona organization, has stolen 30 bases in 36 tries and is hitting .341 with men in scoring position and .278 overall. He well may be used as a pinch runner this weekend.

Martinez, 30, also was suspended for 80 games in May under baseball’s minor league drug program after he tested positive for the performance-enhancing substance ibutamoren, which increases human growth hormone.

A two-time All-Star and impressive enough to land a $51 million, five-year contract from the Cardinals, Martinez was 62-52 here with a 3.74 earned run average and 31 saves in 139 starts and 135 relief appearances. But Martinez was 4-9 with a 6.23 ERA in 16 starts for the Cardinals last season, cut short by ligament damage in his right thumb, and his $17 million option was not picked up.

The Dominican Republic native who went by the nickname “Tsunami,” signed a minor-league contract with San Francisco this spring but opted out of it, was released and signed by Boston. He made two starts for the Red Sox farm club at Class AAA Worcester, allowing 10 runs in 4 1/3 innings before being released again.

Hitless in 17 at-bats with runners in scoring position, wheezing offensively after 17 games in 16 days, Cardinals counted on their gloves in 5-3 win at Cincinnati.

In 5-3 win, Cardinals go zero-for-17 with runners in scoring position, but two outs at the plate created by a five-infielder defense buys time for final rally.

Cardinals notebook: Jack Flaherty zips toward return as other roles under review

Cardinals notebook: Jack Flaherty is ready for 'opening day, round two' on Monday

Hudson will go to bullpen in pitching shuffle.

Nootbaar, Edman homer and O'Neill drives in two with single in 8-0 romp.

With devastating fastball-slider combination, Cardinals’ Jordan Hicks has made his way back

Reliever fans three men in a row while game is on the line. Montgomery wins third straight against Cubs in three different parks. Nootbaar and Edman homer.

Quick hits: In autumn of his career, Cardinals icon Molina has spring in his step

Rejuvenated catcher drives in three runs as he and ace right-hander beat Cubs and move one game from tying record for starts by battery mates.

BenFred: Even NL fundamentalists have to admit Pujols and Cardinals have made DH a hit

Since the All-Star break, the Cardinals are leading MLB in OPS produced by designated hitter

The homer is No. 695 of his career. Mikolas blanks Cubs for eight innings.

Manager will spend the next month testing relief possibilities while preparing for the postseason stage.

First Pitch: Cardinals' three veterans get last start against Cubs as a trio

For the last time, the Cardinals will start Albert Pujols, Adam Wainwright and Yadier Molina in a game against the Chicago Cubs.

Cardinals relief pitcher JoJo Romero celebrates after striking out the final two batters to end the sixth inning against the Braves on Saturday, Aug. 27, 2022, at Busch Stadium.

The Cardinals’ Brendan Donovan slides into home off a single by Nolan Arenado in the sixth inning against the Braves on Sunday, Aug. 28, 2022, at Busch Stadium.

Cardinals starting pitcher Jose Quintana and manager Oliver Marmol shake hands after Quintana was taken out of the game in the sixth inning against the Cubs at Busch Stadium on Thursday, Aug. 4, 2022.

The Cardinals' Carlos Martinez celebrates after striking out the Diamondbacks' Josh VanMeter in the fifth inning of a game at Busch Stadium on Tuesday, June 29, 2021.