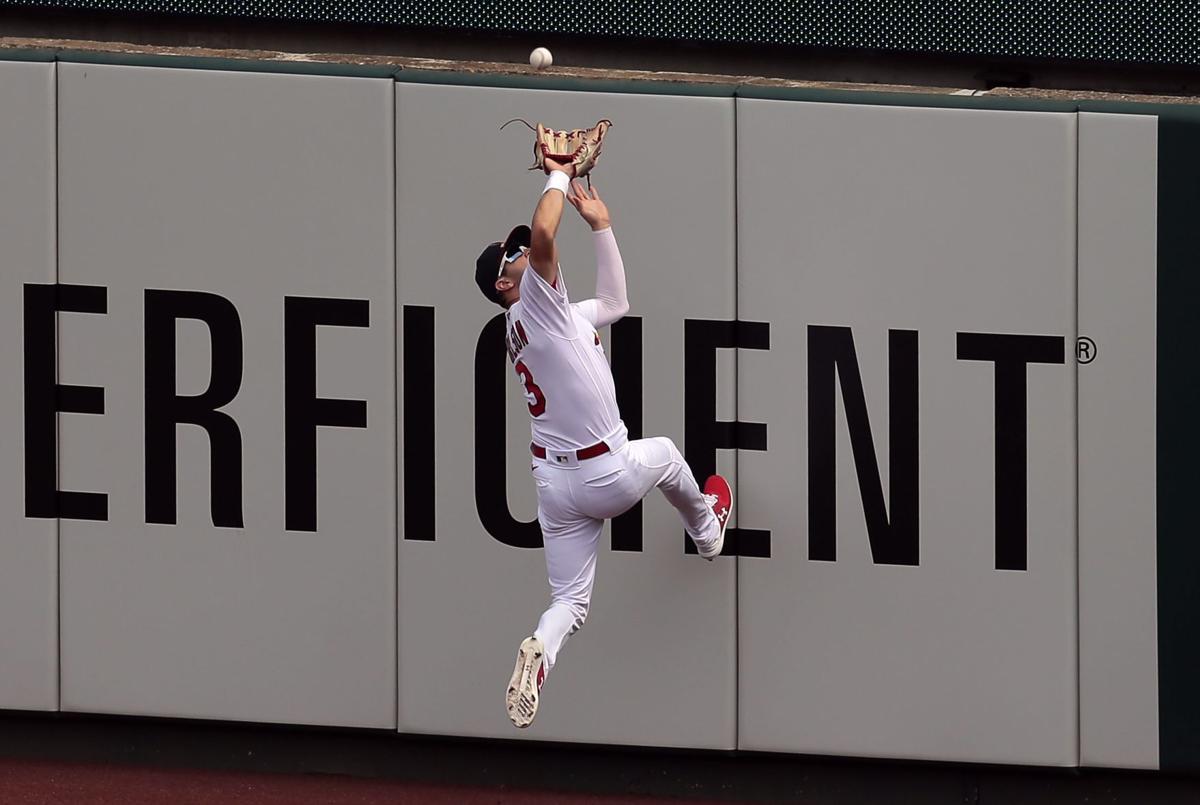 The Cardinals' Dylan Carlson climbs the wall to catch a shot to right field by San Diego's Fernando Tatis, Jr. in the first inning on Sunday, Sept. 19, 2021, at Busch Stadium. That set the tone in the Cards' 8-7 victory, giving them a sweep of a three-game series. (Robert Cohen, rcohen@post-dispatch.com) 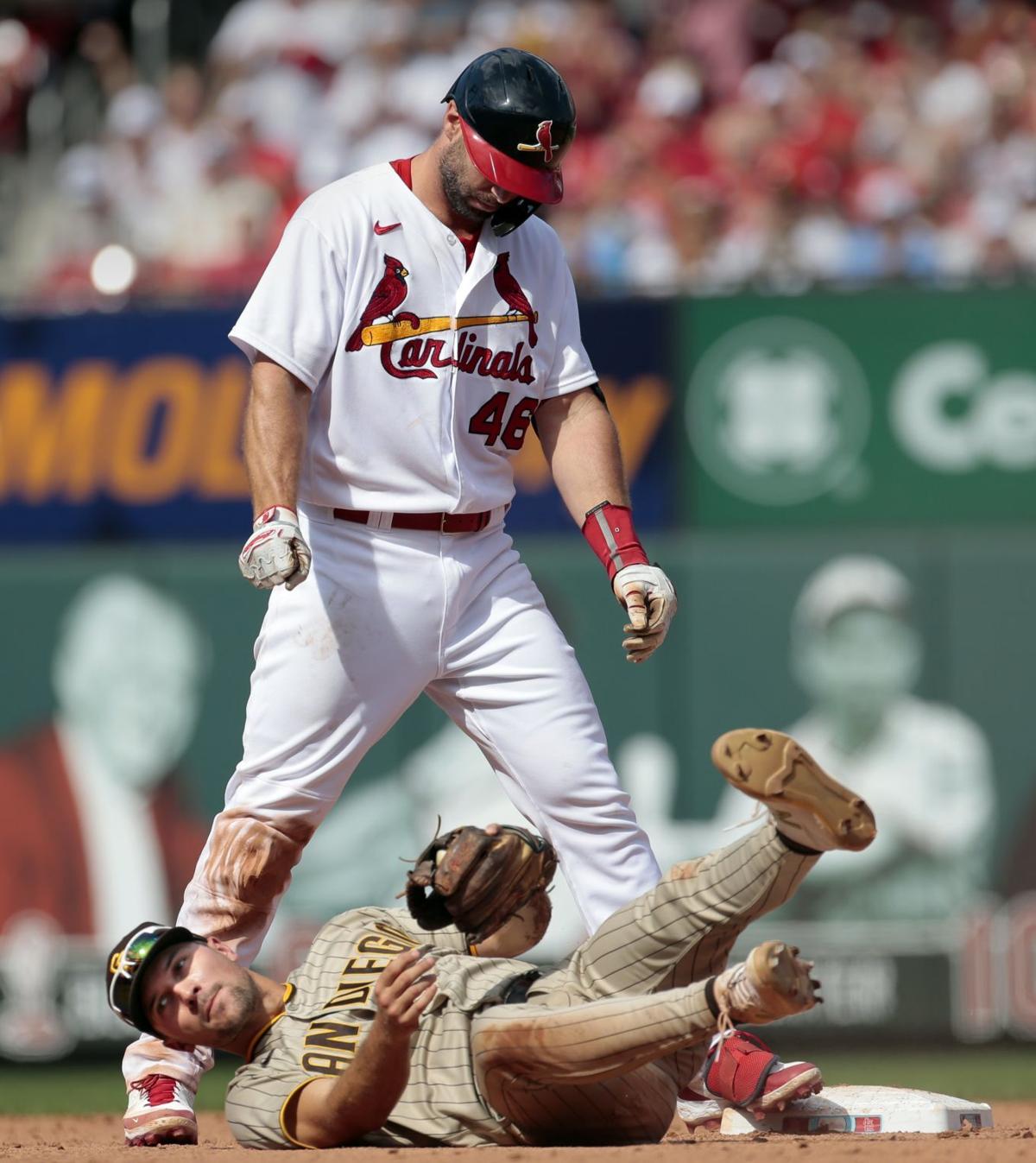 The Cardinals' Paul Goldschmidt is safe on a double after a late tag by San Diego's Adam Frazier in the fifth inning on Sunday, Sept. 19, 2021, at Busch Stadium. (Robert Cohen, rcohen@post-dispatch.com) 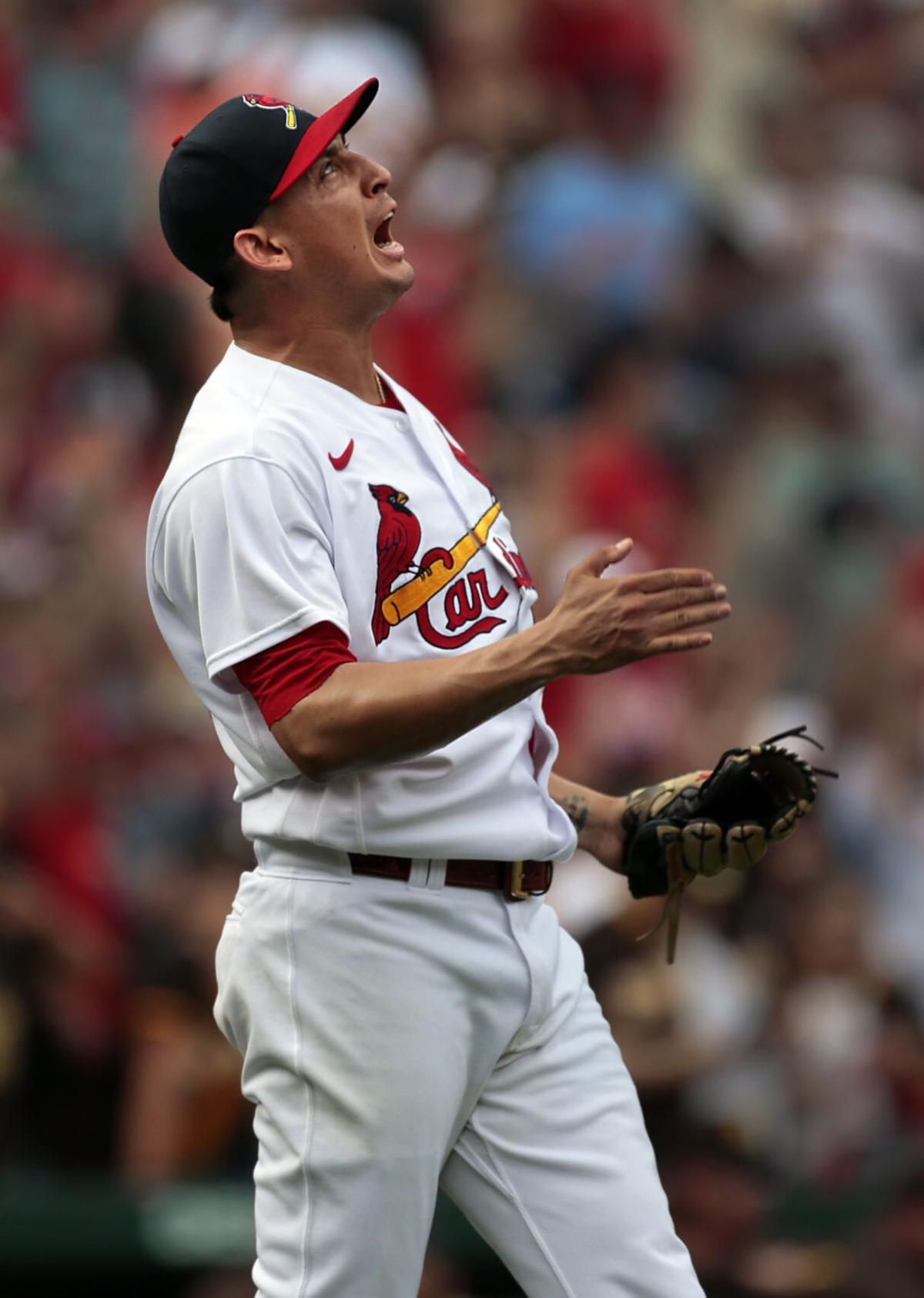 St. Louis Cardinals pitcher Giovanny Gallegos closes out the ninth inning with a fly ball caught by Harrison Bader and an 8-7 victory over the San Diego Padres on Sunday, Sept. 19, 2021. Photo by Robert Cohen, rcohen@post-dispatch.com. 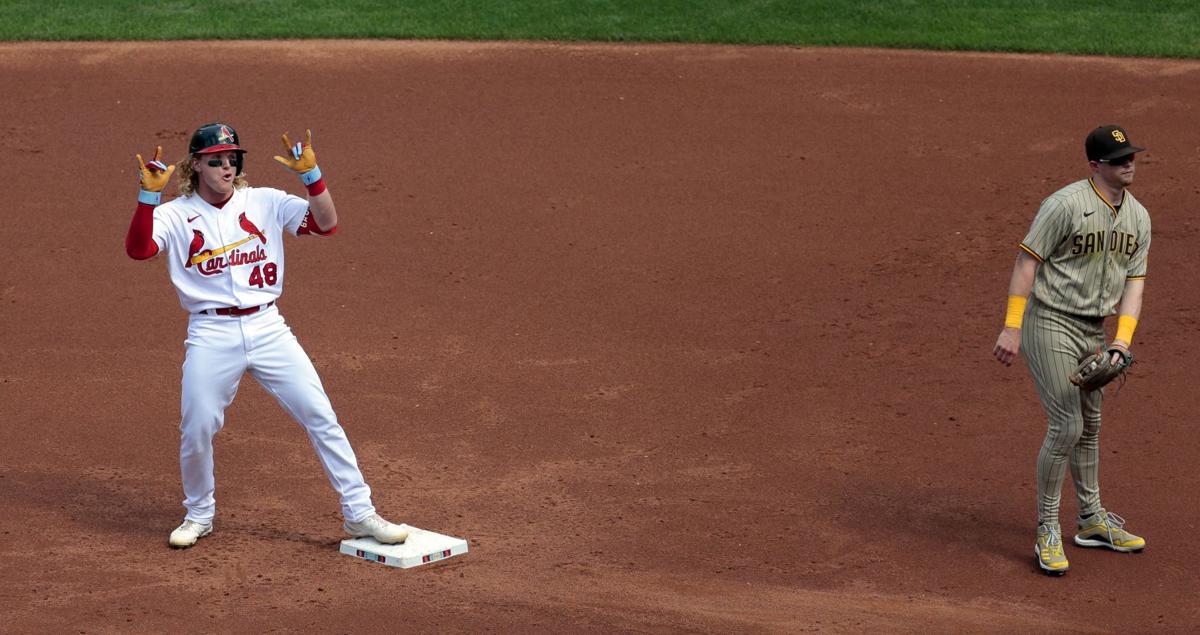 St. Louis Cardinals Harrison Bader hits a two-RBI double in the first inning against the San Diego Padres on Sunday, Sept. 19, 2021. The Cardinals swept the Padres with an 8-7 victory. Photo by Robert Cohen, rcohen@post-dispatch.com. 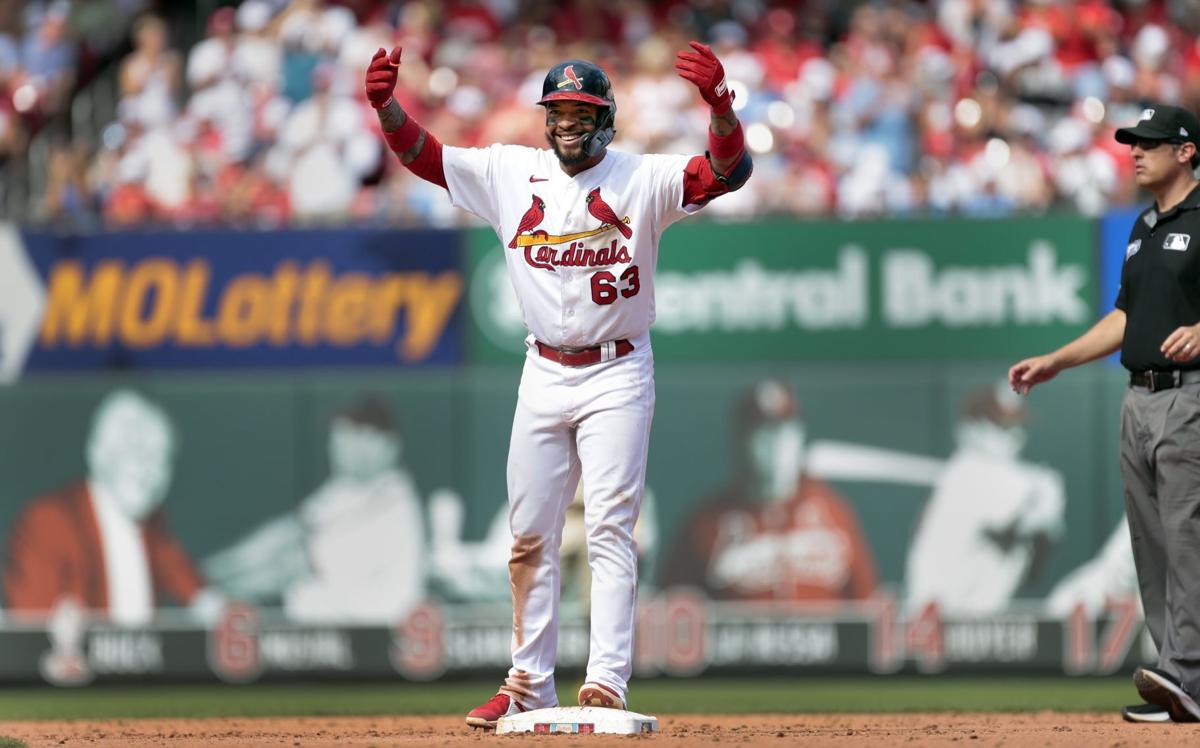 This weekend of play did a lot to separate contenders from pretenders in the competition for the National League’s second (and final) wild-card playoff spot. A late-season winning streak of eight games has a way of doing that.

The Cardinals matched their longest winning streak since Aug. 7-15 of 2018 when then completed a sweep of the San Diego Padres 8-7 Sunday afternoon at Busch Stadium before a paid crowd of 35,326. Over their past eight games, the Cardinals have beaten Cincinnati twice, New York three times and San Diego three times. All were second wild-card contenders when those series began.

Now, none of them is a strong contender, notably the Mets, who are below .500. Cincinnati and San Diego found themselves four games out on the loss side after Sunday’s competition, along with the Philadelphia Phillies. who lost a night game at New York. San Diego and Philadelphia both are 3½ games behind the Cardinals, and the Reds are three behind.

The Atlanta Braves, whose Eastern Division lead over the Phillies is just two games, might turn out to be wild-card contenders but the Cardinals are ahead of them on the loss side, also. The Cardinals on Sunday got to 10 wins over .500 at 79-69 for the first time this season.

One of the benefits derived from the Cardinals’ recent domination is that neither the Reds nor Padres nor Mets nor Phillies get a shot at the Cards again. Neither do the Braves.

“You’re the one in control,” Cardinals starting pitcher J.A. Happ said. “You don’t have to rely on anybody else doing something. You get into that spot where you have the lead and your focus is more what you’re doing and you start to see your eyes wander up (to the scoreboard) a little bit less. You save that for after the game.

“We feel good about the way we’re playing right now. Confidence can be a scary thing. If you’re playing right at the right time of the year, sometimes that can go a long way,” said Happ, who has been to the postseason with three other teams. “You want to stay right where you are.”

It could have been over early Sunday but the desperate Padres showed some late life.

The Cardinals scored five in the first off former Chicago Cubs star Jake Arrieta, a former Cy Young Award winner who might have made his final St. Louis appearance. Then the Cardinals were forced to hang on as their bullpen struggled before Giovanny Gallegos posted his 10th save, striking out two of three hitters he faced in the ninth.

Gallegos, taking over the closer’s job from Alex Reyes at the end of August, has eight saves since then And Reyes, who worked the fifth and sixth innings on Sunday, earned his ninth win, four of those since not being the closer.

“It’s a blessing to me to have that (closer’s) spot,” Gallegos said through a translator.

He said he had gained some advice from catcher Yadier Molina, who did not play on Sunday, and a 40-year-old starter, Adam Wainwright, who used to be a closer.

“They’ve been a really good help in terms of the mental state that it takes,” Gallegos said. “The main focus is to keep things simple.”

Arrieta, who entered the game with a 7.05 earned-run average, left after facing six batters in the inning, because of a right groin strain.

The 35-year-old wasn’t helped by a dropped ball by center fielder Fernando Tatis Jr., on Nolan Arenado’s shallow fly. Tatis, normally a shortstop, scrambled after the ball and fired home well too late to catch Tommy Edman when Tatis had an easy force at second.

Edman had doubled for a league-leading 41st time to lead off the inning and moved to third on Paul Goldschmidt’s single off the glove of diving shortstop Jake Cronenworth. Tyler O’Neill walked before Tatis’ muff.

Afterward, Dylan Carlson, who had banged into the right-field wall to make a remarkable, jumping catch on Tatis Jr., in the top of the first, hit a sacrifice fly to score Goldschmidt. Edmundo Sosa doubled off Arrieta for the third run and, after Arrieta departed, Harrison Bader doubled in two more off reliever Craig Stammen.

Sosa had two doubles, each good for a run batted in. He had had only six doubles all season before Sunday.

The momentum derived from Carlson’s catch seemed to carry over into the home first.

“After hitting the wall, he held onto it (barely),” said Happ, who allowed four hits and three runs in four innings of work. “That could have been a double or triple right off the bat and put me in a tough spot.”

“We got an opportunity,” Cardinals manager Mike Shildt said, “and we seized it. That’s what good teams do.”

Happ retired the first seven batters he faced before he walked Adam Frazier with one out in the third. Frazier scored on a two-out single by Tatis Jr.

The Padres, who have lost 16 of their past 22 road games including eight of 10 on the trip that took them to Los Angeles, San Francisco and here, scored twice more in the fourth. Manny Machado legged out an infield hit and went to third on Austin Nola’s one-out double. Eric Hosmer’s groundout scored Machado and Nola came around on Wil Myers’ grounder off the inside of Happ’s right foot, with the ball caroming into right field.

Happ exited for a pinch-hitter after four innings although he said his foot was not the reason. It was the manager’s decision.

Reyes quickly restored some order with a 1-2-3 fifth inning and then the Cardinals upped their lead to four runs at 7-3.

Goldschmidt opened with a double to left center, executing a nifty slide to avoid second baseman Frazier’s tag. O’Neill, who hit key home runs in the previous two games, singled to score Goldschmidt and came home himself on Sosa’s bloop double to right, where Myers missed on a diving attempt.

Pham homered off Reyes to cut the Cardinals’ lead to 7-4 in the sixth. But the Cardinals resumed their four-run lead in the home seventh when O’Neill was hit by a pitch, stole second base and scored on a single by Carlson, who drove in his second run.

Cardinals righthander Luis Garcia had his major-league high of 25 1/3 scoreless innings snapped after he allowed two of the three runs the Padres surged for n the eighth inning.

Pham knocked in his second and third runs with a two-run double. Advancing to third on shortstop Sosa’s throwing error, Pham came home on a groundout. But the Padres could not muster the tying run.

Shildt said he was sure the Padres, even down big early, were “going to give their best bolt and they did. But we were able to fend them off.”

“Huge, huge series,” Happ said. “That’s definitely an understatement. But we definitely have a . . . ways to go yet.”

'I did my best to be a good caretaker of Cardinals' legacy': Shildt discusses sudden firing, acknowledges but does not detail divisive 'differences'

Cardinals fired Shildt, after three consecutive years in the playoffs, due to what the team said was a 'philosophical difference.'

Two out, pressure’s on: After firing his second homegrown, hand-picked manager, Mozeliak’s next choice a defining one for Cardinals

A winning team with returning stars had momentum building for 2022 before the sudden dismissal of manager Shildt allowed frustrations, questions to surface.

Three weeks after a record 17-game winning streak, Shildt "floored" by dismissal from pro organization who groomed and inspired him.

Shildt is the first St. Louis manager to be fired immediately after taking his team to the postseason.

Meanwhile in Arizona: Nootbaar, Thompson off to assertive debuts in prospect-rich Fall League

Hicks is set for his second start in the Arizona Fall League as he builds health for spring and explores the schedule of a new role, starter.

None of the 10 teams in the Central divisions have advanced to the World Series since 2016.

Cardinals players praise 'steadiness' of Shildt's coaching staff, so will all of them be back for encore?

Shildt, who will receive NL Manager of the Year votes, has led Cardinals to postseason in all three full seasons. Negotiations on an extension are forthcoming.

Eno Slaughter scored what was undoubtedly the most famous run in Cardinals World Series history.

The Cardinals' Dylan Carlson climbs the wall to catch a shot to right field by San Diego's Fernando Tatis, Jr. in the first inning on Sunday, Sept. 19, 2021, at Busch Stadium. That set the tone in the Cards' 8-7 victory, giving them a sweep of a three-game series. (Robert Cohen, rcohen@post-dispatch.com)

The Cardinals' Paul Goldschmidt is safe on a double after a late tag by San Diego's Adam Frazier in the fifth inning on Sunday, Sept. 19, 2021, at Busch Stadium. (Robert Cohen, rcohen@post-dispatch.com)

St. Louis Cardinals pitcher Giovanny Gallegos closes out the ninth inning with a fly ball caught by Harrison Bader and an 8-7 victory over the San Diego Padres on Sunday, Sept. 19, 2021. Photo by Robert Cohen, rcohen@post-dispatch.com.

St. Louis Cardinals Harrison Bader hits a two-RBI double in the first inning against the San Diego Padres on Sunday, Sept. 19, 2021. The Cardinals swept the Padres with an 8-7 victory. Photo by Robert Cohen, rcohen@post-dispatch.com.