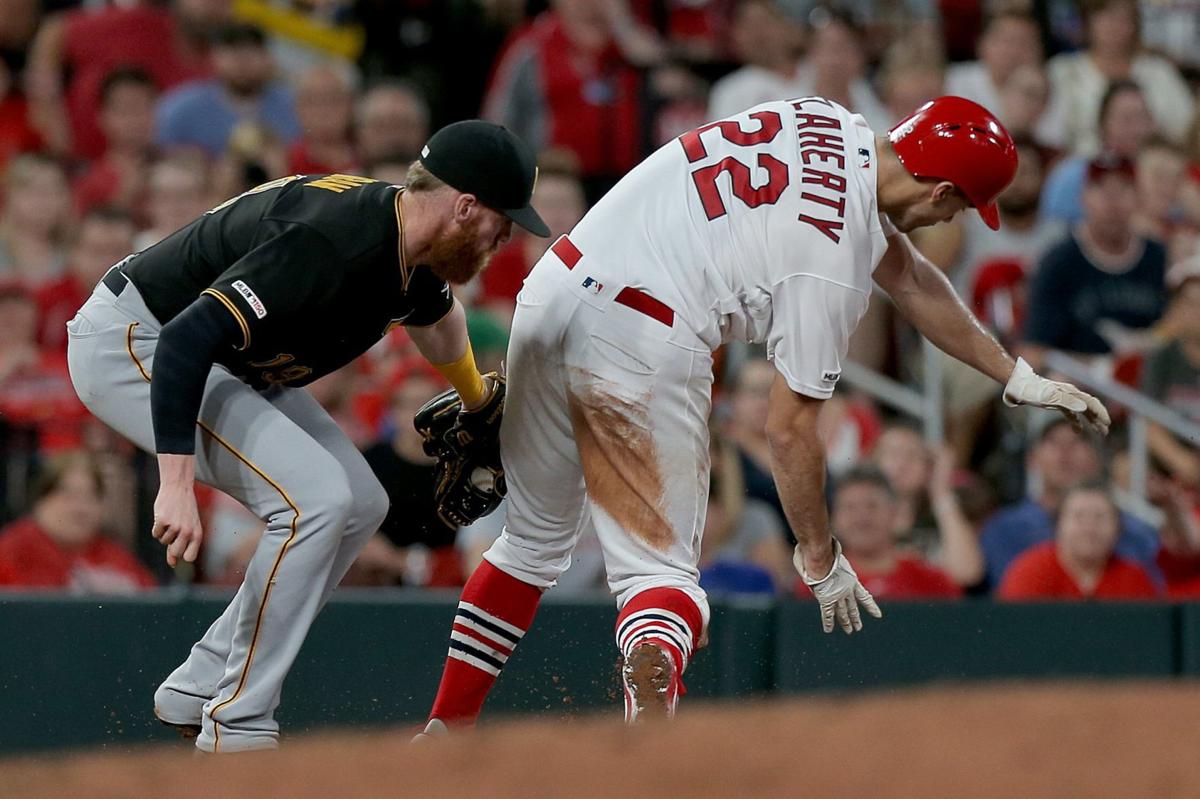 Cardinal pitcher Jack Flaherty is tagged out at third by Pittsburgh's Colin Moran in the fifth inning on Tuesday, July 16, 2019, in a game at Busch Stadium in St. Louis. Photo by Christian Gooden, cgooden@post-dispatch.com 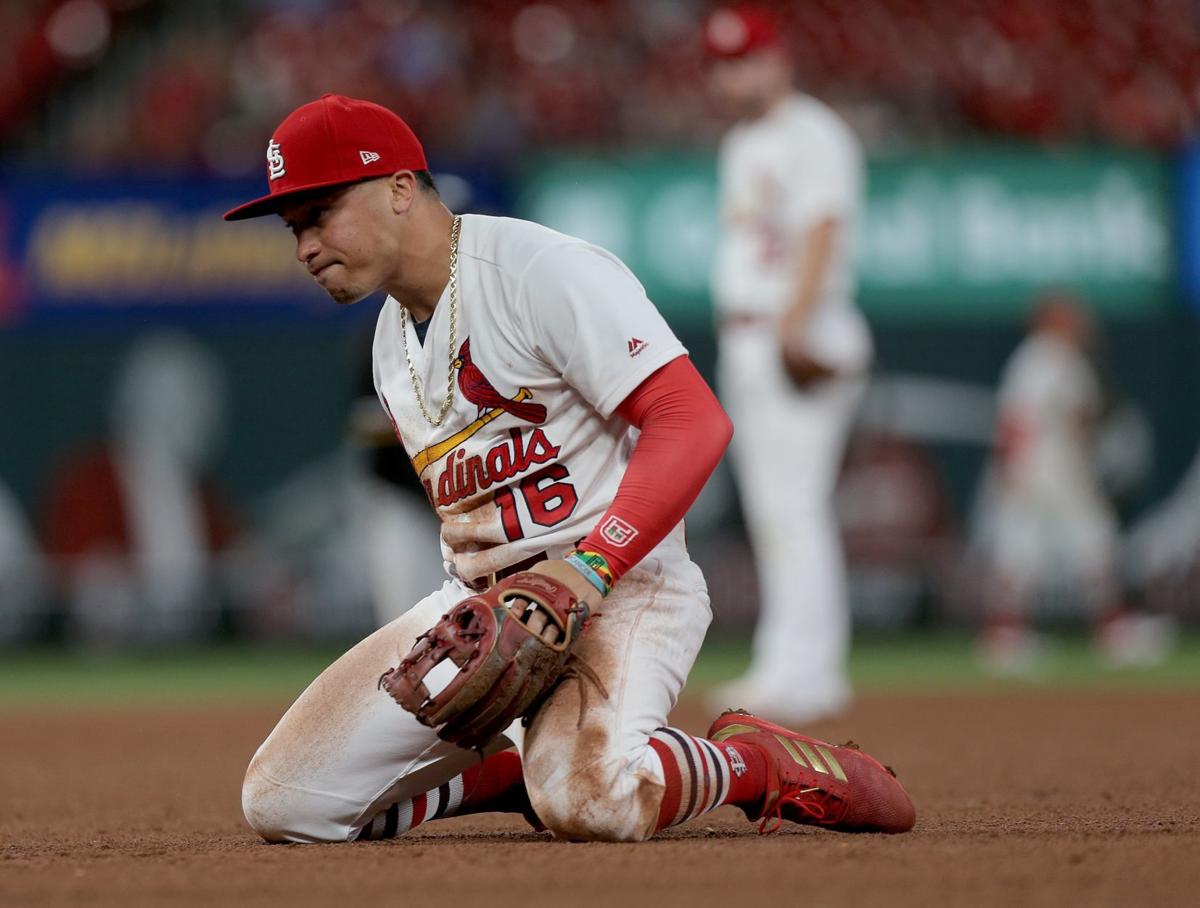 Cardinals infielder Kolten Wong laments a bobbled a ball hit by Colin Moran in the ninth inning on Tuesday, July 16, 2019, that scored a run for the Pirates in a game at Busch Stadium in St. Louis. Photo by Christian Gooden, cgooden@post-dispatch.com

It had been 62 days, since May 14, that Jack Flaherty last had won for the Cardinals. In that time, Flaherty was 0-3 and his team 2-7 in those nine games although the Cardinals were shut out twice in that stretch, including a 1-0 loss to San Francisco when Flaherty had a no-hitter for 6 1/3 innings.

In game 162 managed by Mike Shildt for the Cardinals, the equivalent of a full season, Flaherty’s winless streak didn’t end Tuesday night despite another masterful effort in which he begrudged the Pittsburgh Pirates three hits and one run for seven innings. And the Cardinals didn’t prevail either, falling 3-1.

The Pirates shoved across two runs in the ninth inning off Carlos Martinez. First there was a hit batsman (Starling Marte), then a single by Josh Bell, sending Marte to third. Colin Moran got an infield hit when second baseman Kolten Wong made a diving stop to his left but, in trying to start what would have been a difficult double play at second, couldn’t control the ball, which scooted away.

Marte scored on that play and then the Pirates loaded the bases on a walk to Corey Dickerson. A second run scored when Wong, taking a late feed from shortstop Paul DeJong, bounced a throw to first baseman Paul Goldschmidt, who couldn’t hang onto the ball as the Cardinals tried to get a double play on Kevin Newman’s grounder to short.

Wong, discussing the first potential double play, said, “When I caught the ball, I tried to turn around and make a good throw and unfortunately couldn’t get a grasp of the ball.”

Shildt, who took over just after the midway point of last season, reached the 162-game mark at 88-74, the same record as the ones achieved in their first years as Cardinals manager by Tony La Russa in 1996 and Mike Matheny in 2012. Both those seasons wound up with the Cardinals in the National League championship series.

The Cardinals had their chance. They had runners at first and third and nobody out in the seventh and didn’t score.

In the fifth, Flaherty doubled over third to score Harrison Bader, who had doubled and stolen third.

Flaherty also was ruled to have stolen third with one out but the Pirates challenged and crew chief Gary Cederstrom’s initial call was overturned. Shildt didn’t argue the merits of the call being right or wrong, but he did argue that the Pirates had 42 seconds, by his count, to issue the challenge, rather than the standard 30. Cederstrom said afterward that the scoreboard clock that ticks off those 30 seconds isn’t used when a challenge is issued with a batter (Tommy Edman) still at the plate. Cederstrom said the 30 seconds began when he pulled out his stopwatch.

“I didn’t feel any urgency to it,” said Shildt.

“We’ve got three guys who got watches out and mine was the quickest,” said Cederstrom. “I told Mike, ‘You might be right,’ but all we can go by is this (the stopwatch) because there was nothing up there (on the scoreboard). Plays during a batter (at the plate), the 30-second clock doesn’t come on. Steals, pickoffs, anything during an at-bat.

“If he strikes out or walks, now they turn it on. If he hits the ball, then that clock is used. We try to be as close to what the normal 30-second clock would be but (the watch) is all I can go by.”

Shildt said, “Later on, we got to 30 seconds but we didn’t have clarity (from their replay room), so we punted. Time was up.

“(On the Flaherty steal), Gary said he had his stopwatch out and he said, ‘It’s based on when I started.’ No one was rushing on their bench (to challenge).

“I still need some clarity on how 30 seconds becomes 42 seconds and it becomes that ambiguous. That was a big play in that game. Those guys do a great job. They gave me the explanation but I still didn’t understand it.”

Flaherty blamed himself, both for grounding out with the bases loaded in the second and then coming off the bag on the steal. “I was safe but I popped off,” he said. “It’s not like I was thrown out by a mile or anything. I popped off the base.

“It happens to everyone. My foot just hit and I slid off to the side. Stay on the base. Everyone else has to deal with it.”

There was another unusual umpiring decision in the fourth.

Umpire Bruce Dreckman ruled that Marte had been hit by a pitch and waved in the direction of first base. But Marte declined to go.

“He told me it didn’t hit him,” said Dreckman. The call was changed, correctly, that the ball had hit Marte’s bat for a foul.

Flaherty pitched out of trouble in the seventh when Marte singled to left and went to second on Bell’s deep fly to center. With lefthander Andrew Miller warming up, along with righthander Giovanny Gallegos, Flaherty stayed in and eventually got out of the inning, striking out Newman with two on and two out. Flaherty finished his night with three hits allowed and eight strikeouts.

With the score tied at 1-1 in the home seventh, Dexter Fowler, who thought the ball was a home run, doubled off the top of the left-center wall. When Dickerson and center fielder Marte couldn’t decide who should pick up the carom, Marte fumbled the ball and Fowler made third easily. Wong walked before the Pirates changed pitchers to Richard Rodriguez.

Matt Wieters bounced to Bell, who looked Fowler back to third and fired to second for the forceout as Wieters was safe at first. Bader, after bunting foul, fouled to Bell and pinch hitter Jose Martinez rolled out, and Fowler remained tethered to third.

“That’s clearly frustrating,” said Shildt. “You’ve got first and third and nobody out and you can’t get a ball out of the infield. Obviously, guys are giving the effort but we’ve got to execute there.

“In the last three innings, we didn’t execute as well as they did. That was the difference in the game.

“Got to be able to get him home with nobody out.”

Flaherty summarized the night, in this fashion:

“Sometimes you have to scratch and claw for runs and some days Tyler O’Neill’s going to hit two home runs in a game and take care of it. That’s the game,” Flaherty said.

Best Podcast in Baseball: Which moves at trade deadline?

Mozeliak on free agent outfielder's departure to Atlanta: 'This now clears a path for our young outfielders to play every day.'

Molina wants to play several more years for Cardinals — and if not them, 'that's it for me'

Celebrated backstop for one of the most successful eras in franchise history is entering the final season of a three-year, $60-million deal.

Cardinals’ quest for a new cleanup hitter begins in earnest now. O'Neill, Thomas, Carlson all could wind up in left field.

Cardinal pitcher Jack Flaherty is tagged out at third by Pittsburgh's Colin Moran in the fifth inning on Tuesday, July 16, 2019, in a game at Busch Stadium in St. Louis. Photo by Christian Gooden, cgooden@post-dispatch.com

Cardinals infielder Kolten Wong laments a bobbled a ball hit by Colin Moran in the ninth inning on Tuesday, July 16, 2019, that scored a run for the Pirates in a game at Busch Stadium in St. Louis. Photo by Christian Gooden, cgooden@post-dispatch.com