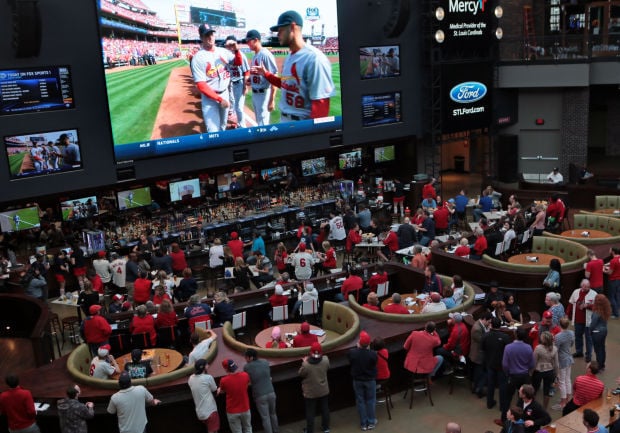 Fans watch the St. Louis Cardinals' season opener against the Cincinnati Reds on the big screen in Fox Sports Midwest Live! at Ballpark Village in 2014. Photo by Laurie Skrivan, lskrivan@post-dispatch.com 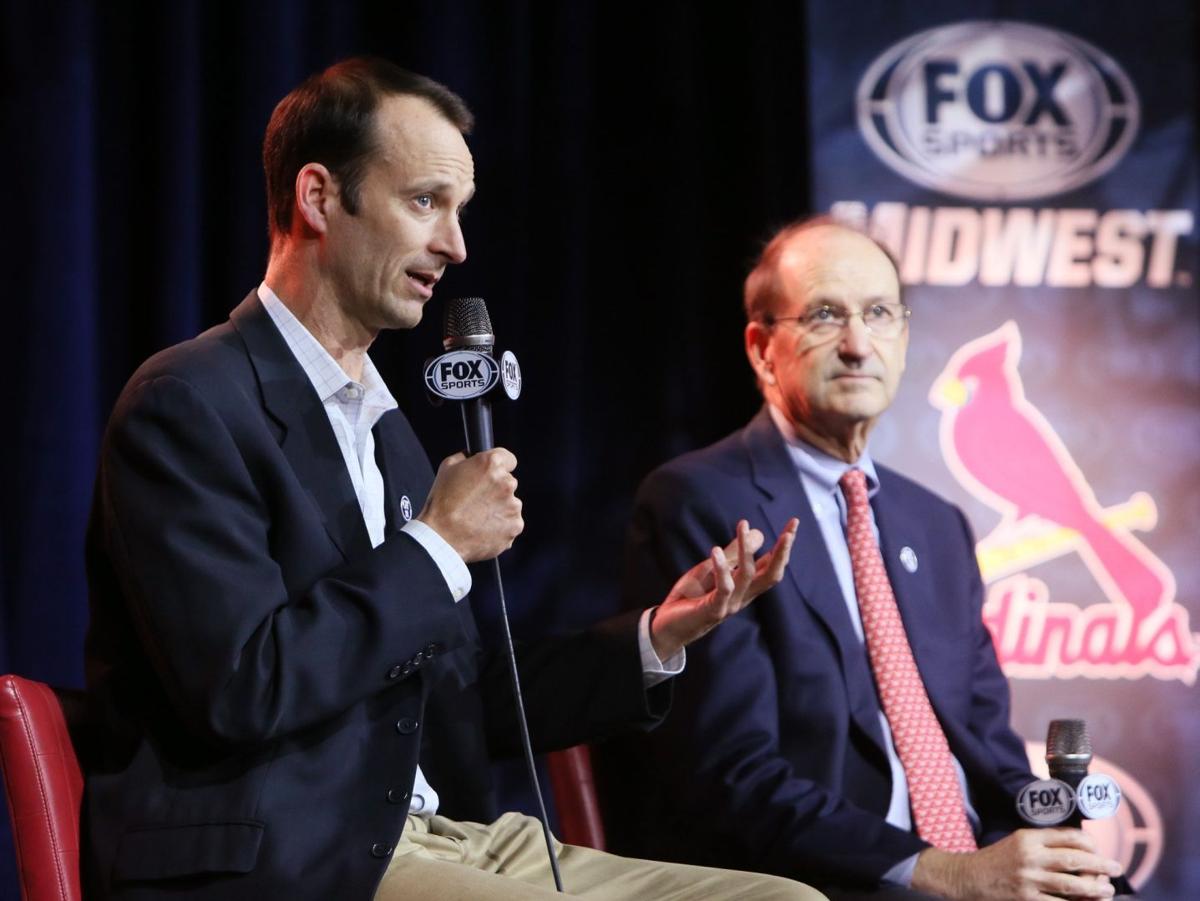 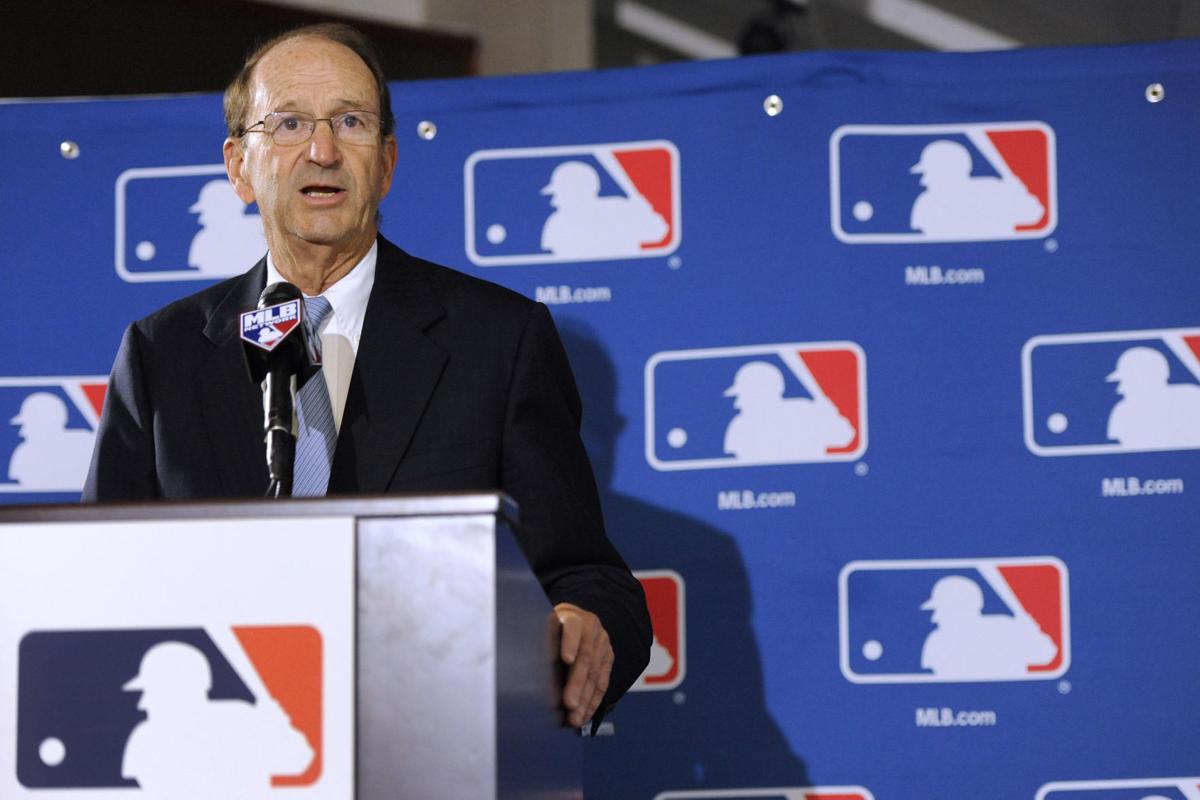 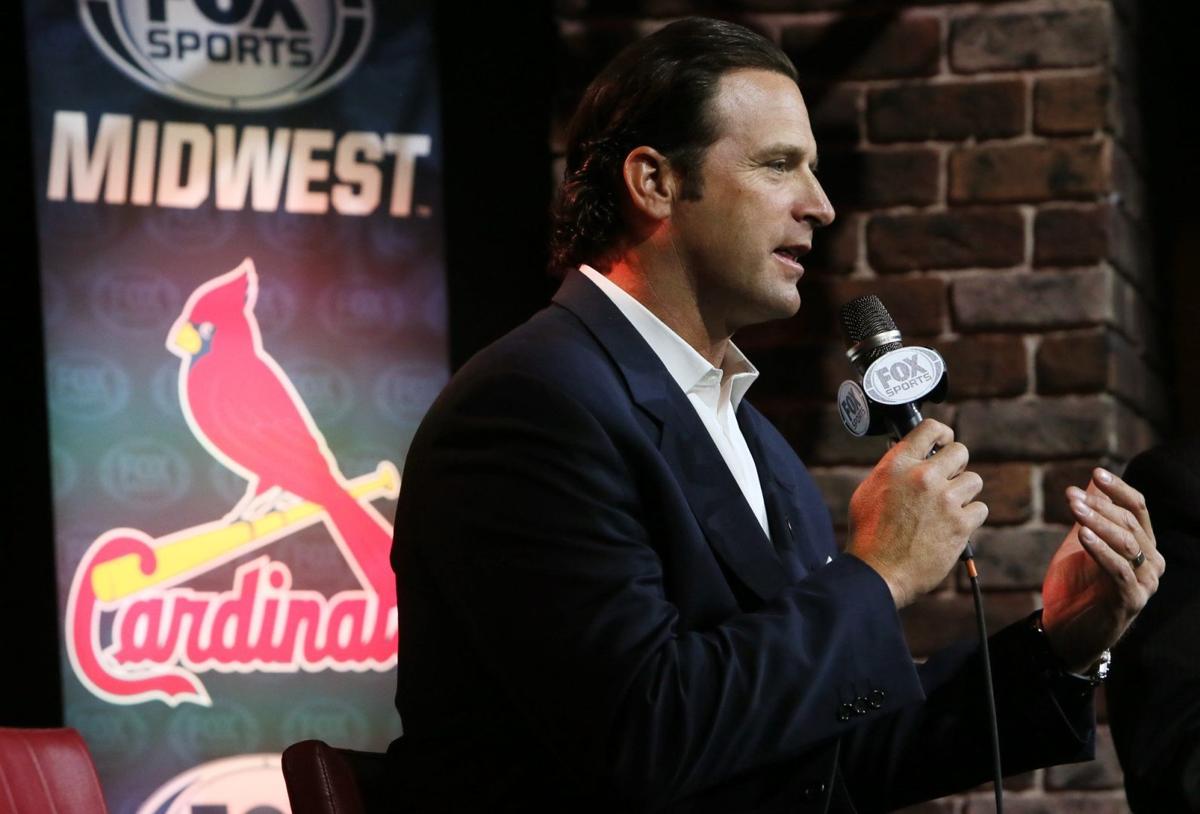 Capitalizing on their history of success and baseball’s skyrocketing value as real-time TV, the Cardinals have reached a deal with Fox Sports Midwest that will guarantee the team more than $1 billion and assert for years to come their televised presence in a broad, devoted region.

The team and its exclusive local broadcast partner are expected to announce a new, 15-year agreement Thursday morning, officials on both sides confirmed. The new deal will begin with the 2018 season, continue to feature as many as 150 televised regular-season games, and also provides the Cardinals with a minority stake in the network.

“This does give us a great deal of stability over the next 15 years and does so in a market that has been shifting,” Cardinals chairman Bill DeWitt Jr. said. “It has a nice increase in rights fees as well as the equity component and as a whole it will allow us to remain as competitive as we have been with our payroll, with our spending in the international markets, with our activity in amateur markets and other ways we have invested in development. We have certainty going forward.”

The agreement is new and not an extension of the current deal, which expires after the 2017 season. The value of the 2018-2032 rights package allows the Cardinals to catch up with a trend that has radically shaped baseball in recent years.

As far back as 2011, the Los Angeles Angels splashed cash on free agents such as former Cardinals first baseman Albert Pujols because they were about to enter into a new, lucrative rights deal that reportedly reached at least $3 billion. In recent years, San Diego has upped its annual average rights fee to as much as $50 million, and this past February the Arizona Diamondbacks and their broadcast partner reached an agreement on a 20-year, $1.5-billion package that also included a stake in the network for the D-Backs, according to The Arizona Republic.

The Cardinals deal fits in that marketplace. The team and Fox Sports Midwest declined to discuss specifics, citing a confidentiality agreement. The Cardinals’ current deal, two sources have previously confirmed to the Post-Dispatch, will escalate to about $35 million in its final year. Based on the expected growth for inflation of the next deal, the annual average rights fee in the next deal will be more than double that. It will start close to $55 million in 2018 and climb with inflation each year.

The total for the rights fee alone could surpass $1 billion, and that does not include the signing bonus or additional revenue the Cardinals will get from the equity stake.

Jack Donovan, general manager and senior vice president of Fox Sports Midwest, declined to discuss the specifics of the equity arrangement. He said the sides saw benefits to working on a deal now — two years before the Cardinals had to decide on their 2018 option. Discussions intensified over the past year, and the agreement was recently approved by Major League Baseball.

“It was in the best interests to get out in front of it before the current deal expired,” Donovan said. “This provides stability too for the network for years to come.”

The rights-fee gusher in baseball, both with local and national broadcast rights, has allowed teams in midsized markets to become as aggressive as larger-market teams when it comes to spending on players, whether it’s keeping talent or pursuing free agents.

DeWitt has said the Cardinals, who have maintained a top-10 payroll for more than a decade, would see a significant increase in spending on salaries over the coming years. The Cardinals have long linked their payroll to their ticket sales, which have reached 3.325 million for 2015, according to an official. They expect to sell more than 3.4 million. But DeWitt’s projections for an increased payroll in coming years — one that would stretch to fit the addition of at least one core player, while also allowing the team to consider extensions to stars such as Michael Wacha, Carlos Martinez and Trevor Rosenthal — were based on an increase in rights fees, too.

“It seemed to me like the days of the excessive rights fees are not here anymore,” DeWitt said. “Everybody wants to hedge their bets. The legacy deals, in general, are below market value. I think a lot of teams are looking at the upside, but it is depending on the market, which is moving. In this deal, we both have the opportunity to benefit in the profitability of the network.”

The Cardinals telecasts on Fox Sports Midwest annually gather some of the highest ratings in baseball, and the games are the highest-rated prime time program in St. Louis during the season. They had the highest ratings of any team in 2014, and that was the 15th consecutive year that the Cardinals ranked in Major League Baseball’s top three for local TV ratings. They are No. 2 this year. Those ratings are robust in the St. Louis area, but Fox Sports Midwest also provides Cardinals games to a region that includes part or all of 10 states. Ratings, and the advertising dollars they can command, are only part of the equation when it comes to rising rights fees. Market size is a huge indicator. Teams such as Houston, the Rangers, the Dodgers, and, of course, the Yankees can attract profoundly higher rights fees simply because they play in areas with bigger populations.

A cable network generates income from subscriber fees, and the larger the population the more subscribers. Whether a household watches ESPN or not, if it has a cable bill, it’s paying for ESPN. The Cardinals are the 21st largest market according to Nielsen, behind the Diamondbacks (11th) and Indians (19th) but ahead of the Pirates (22nd) and Padres (28th).

What has made sports programming so valuable to networks is that it’s still appointment viewing. Unlike “Game of Thrones” or “Mad Men,” which can be viewed on demand, or streaming entertainment such as Netflix’s “House of Cards,” sports have remained DVR-proof.

“Sports on television is very powerful (because) people watch it live. They don’t time-shift sports,” Donovan said. “You watch movies and TV shows when you want now. Sports are the only thing where you don’t watch reruns, you don’t watch them two days later. Sports also has shorter commercial breaks. We have to be back live when the ump puts the ball in play. That makes commercials more valuable when they’re in that small pod. Sports is also wholesome content.

“Sports are emerging as the pre-eminent content on TV these days.”

At the end of the new deal, in late 2032, the Cardinals and Fox Sports Midwest will have had a relationship spanning 39 years.

“The Cardinals are one of the crown jewels in sports,” Donovan said. “Their history. Their success. Their popularity. They have a broad footprint. The NFL seems to get a lot of applause for high ratings, and NFL teams do well. But at the end of the day it’s 16 games. When you’re doing really big ratings for 162 games, math dictates the Cardinals are getting some of the largest ratings in sports.”

A dark side to Star Wars Night

One of the most popular nights at Busch Stadium of the seasons brings stormtroopers and Jedi to the ballpark, and bad luck to the ball field.

DeWitt: In-market streaming of games coming 'sooner rather than later'

Cardinals new broadcast deal, announced Thursday, allows for both Fox Sports Midwest and the club to evolve with and benefit from onrushing technology.

MLB releases official schedule for coming season. Cardinals visit Seattle and spend a week in the Los Angeles area, but some hopes were not met.

See what the Post-Dispatch baseball writer has to say about potential offseason moves and much more.

Gordo's Zone: Too much for Brandon Moss?

In today’s Gordo’s Zone, STLtoday.com’s Jeff Gordon talks about the price the Cardinals paid for Brandon Moss, and if there’s another move to …

Manager says players have to see past the scoreboard to the kind of at-bats and approaches that hint at future success.

This battered team needs a bat, and Mozeliak can’t let them down.

John Lackey had a terrific night Wednesday at Busch Stadium. There was just one reservation.

DeWitt: 'We don’t have a sense of the timing or where things stand at this point.'

Lackey's salary will more than triple with bonuses

Fans watch the St. Louis Cardinals' season opener against the Cincinnati Reds on the big screen in Fox Sports Midwest Live! at Ballpark Village in 2014. Photo by Laurie Skrivan, lskrivan@post-dispatch.com