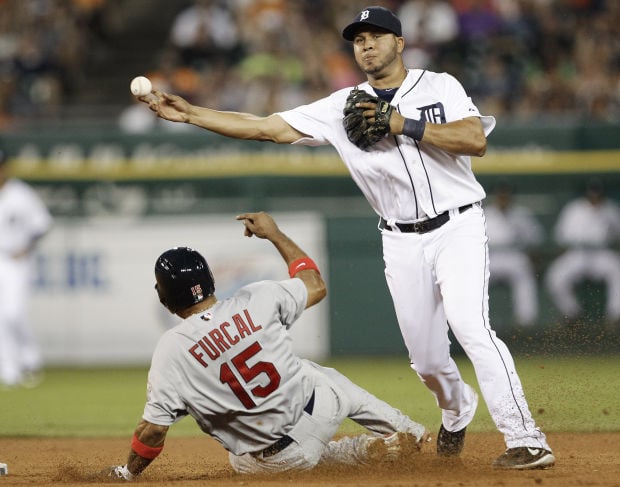 Detroit Tigers shortstop Jhonny Peralta completes a double play over Rafael Furcal in a June 2012 game against the Cardinals in Detroit. (AP Photo) 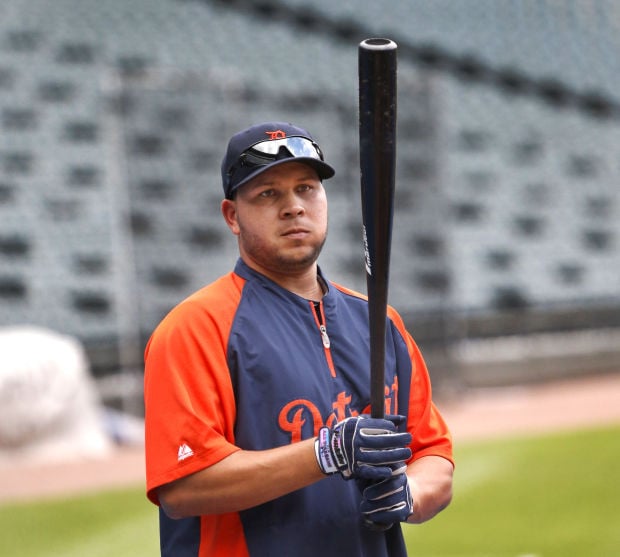 The Cardinals have signed free-agent shortstop Jhonny Peralta to a four-year contract worth at least $52 million.

The club announced the signing in a 5:30 p.m. press release. General manager John Mozeliak will conduct a press conference at 10 a.m. Monday to discuss the signing.

The deal is a club record for the Cardinals awarded to a free agent coming from another team. Matt Holliday's seven-year, $120-million deal was signed after he reached free agency, but he was with the Cardinals the previous season.

“For us, the asking price in the trade market seemed very prohibitive," Mozeliak said about the market for shortstops before the official announcement of the Peralta deal.

Peralta, 31, will be a clear offensive upgrade at the position the Cardinals have targeted this winter for improvement from outside the organization. The righthanded-hitting Peralta batted .303 with a .457 slugging percentage and 11 home runs in 107 games for the Tigers this past season.

He was an All-Star for a second time, but he finished the regular season with a 50-game suspension from his connection with Biogenesis, the anti-aging clinic in Florida alleged to have provided players with performance-enhancing drugs. He accepted his suspension without appeal.

BERNIE: A CLOSER LOOK AT PERALTA

Early Saturday, Mozeliak said he did not see an imminent move.

“But things change,” he cautioned. During a news conference to discuss Friday’s trade of David Freese to the Angels for center fielder Peter Bourjos in a four-player deal, Mozeliak said about the shortstop search: “We’ll exhaust all markets. That’s what we’ll do. … We’re looking at everything. Don’t feel we’re close to anything at this point.”

The Cardinals have found the shortstop market pricey, whether the cost comes in dollars for free agents or prospects needed for a trade. Friday’s four-player deal with the Angels did, at some points in the negotiations, expand to include shortstop Erick Aybar. The Angels had been seeking young pitching in return for the infielder, just as the team had in July before the non-waiver trade deadline.

The teams the Cardinals engaged in this offseason to discuss a trade for a shortstop, like the Angels, the Baltimore Orioles and the Texas Rangers, had been seeking the Cardinals’ top-shelf pitching talent. Starter Shelby Miller has been a target of other teams who want to cash in on the Cardinals' need for a shortstop. A source not connected with the Cardinals said the club, with its stockpile of young pitchers, has "only run into a sellers' market."

Drew might be the best free agent available at the position. Boston offered him a one-year, $14.1 million qualifying offer that ties him to a draft pick. Signing him would cost a team like the Cardinals their first-round pick.

Peralta does not come attached to a compensation pick.

That provided him some leverage as his representatives entertained options, some of which reportedly included a spot in left field. Terms of the agreement were not included in the ESPN.com report. Peralta had been seeking at least a four-year framework earlier this month, according to sources and reports. Peter Gammons reported on Twitter on Friday that three general managers told him Peralta had a four-year, $52 million contract “in hand.”

Peralta is a career .268 hitter with a .330 on-base percentage. He has hit more than 10 home runs in the past nine seasons. He has 45 homers since 2011, the fifth-most among everyday shortstops. Drew, though younger, is a lefthanded bat, something the Cardinals have in abundance. Peralta’s righthanded bat is another draw for the Cardinals who, because of the Freese trade, could start lefthanded hitters at the other three positions: Matt Adams at first, Kolten Wong at second base and Matt Carpenter at third.

Over the past three seasons, he has ranked about average among shortstops for Runs Saved in the field, according to Baseball Info Solutions. A measure of his range and ability to make routine plays had him a plus-6 shortstop in 2011 and even the past two seasons.

He has also been an everyday third baseman in the majors.

Peralta could move to another position during the life of the contract with the Cardinals because of his versatility.

READERS SOUND OFF ABOUT PERALTA

The Cardinals have not expressed a reluctance to sign players who have been linked to performance-enhancing drugs in their past.

Peralta returned from his suspension to start mostly in left field for the Tigers in the playoffs and bat .333 with a .545 slugging percentage. In August he released a statement about his suspension that said in the spring of 2012 he “made a terrible mistake that I deeply regret. … I take full responsibility for my actions, have no excuses for my lapse in judgment and I accept my suspension.”

In a weak shortstop market, Cardinals took the plunge — and some risk — to fill a major hole and improve their offensive production.

Cards Talk: Sound off about the Peralta deal

Third baseman gets what he and GM Mozeliak called 'a new chapter' after a frustrating and inconsistent season, one where struggles were magnified by being the local boy.

Cardinals get better defensively with this deal, increase their depth and save money.

The pundits gave thumbs up the David Freese deal, praising both players coming from the Angels.

Detroit Tigers shortstop Jhonny Peralta completes a double play over Rafael Furcal in a June 2012 game against the Cardinals in Detroit. (AP Photo)