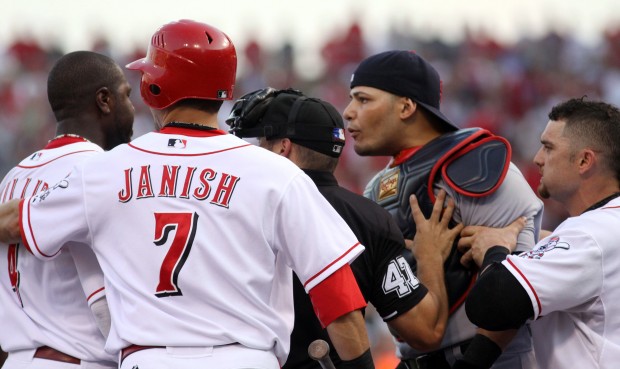 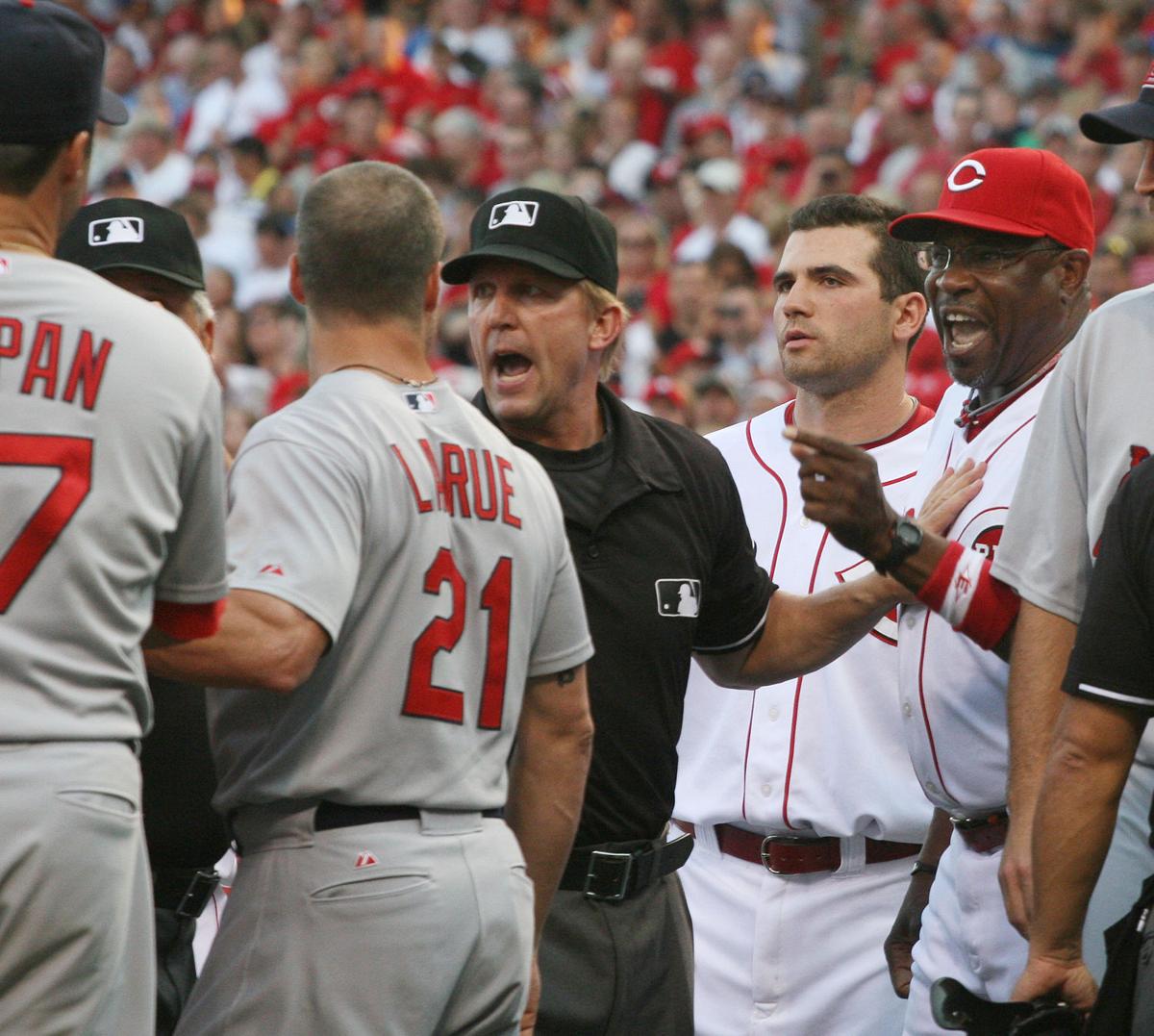 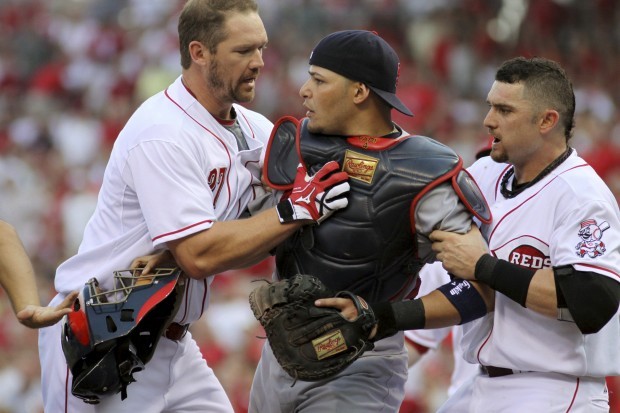 CINCINNATI • Well, Brandon Phillips got his wish. He turned himself into the center of attention. And Phillips' bravado in directing his hate speech at the Cardinals succeeded in stimulating Reds fans, who happily gave their man a hero's standing ovation.

On a steamy night at the Great American Ball Park, the Cardinals and the Reds were roiling on the river. All of the tension and anger finally bubbled over and spilled onto the field when Phillips and Cardinals catcher Yadier Molina went jaw-to-jaw in the bottom of the first.

The only thing missing was ring announcer Michael Buffer. The benches and bullpens cleared; the foul air hanging over these proceedings did not.

During a surprisingly edgy scrum for baseball, Cardinals pitcher Chris Carpenter was pinned against the backstop, Reds pitcher Johnny Cueto turned into an Eddie Murphy film character - Karate man! - and kicked Cardinals catcher Jason LaRue in the head, and both managers were ejected.

The challenge was officially thrown down. The bad blood was on the surface. The increasingly hostile Cardinals-Reds rivalry was opened raw and wide, for all to see. There would be no going back now. This wasn't a game. It was personal.

Given all of the words, spittle and dust that flew around the place on Tuesday night to charge an already static atmosphere, I was curious to see how each of the contenders would respond. Who would remain calm and professional? Who would freak out and lose composure?

Cardinals manager Tony La Russa didn't necessarily enjoy watching the contest from his office. He claimed that he vomited four times because his stomach was churning so violently throughout the nine innings. But La Russa was proud of the victory and paid his men a supreme compliment in an ebullient postgame clubhouse.

"I'd have to search long and hard, and I've been around a long time, but I guarantee you that was tied for first," La Russa said. "I haven't had too many games in all the years I've managed that were in this category of reaching down there deep and gutting it out and playing baseball. This was as good an exhibition of that as many that I've ever been around."

And every Cardinals fan should be saying these four words today:

So in his desperate, pathetic attempt to get noticed, Phillips became the perfect foil for the Cardinals. But the lightning rod became a divining rod instead. Because of large-mouth Phillips, the Cardinals found something that had been missing for much of the season.

I don't even know how to explain it, really. It's difficult to define. Call it mojo. Maybe it's sharpened focus. Perhaps it's esprit de corps. I do believe the Cardinals play hard, and that they care, but at times this season you just wanted to see more urgency from them. But this much is certain: the Cardinals stood as one against Cincinnati's clown prince. The Cardinals were raging Tuesday. They were on fire.

And Phillips' attack on the Cardinals - he called them "little bitches" - disintegrated into a spectacular, epic failure for the Reds. I wonder if Phillips' teammates realize that Phillips was just what the doctor of psychiatry ordered for the Cardinals.

After Monday night's game, I thought the Phillips folderol would pass. STLtoday.com ran a question Tuesday morning: Did Phillips just win the NL Central for the Cardinals? I didn't think so. I dismissed the potential impact. And there's a lot of baseball left. This may all be forgotten in a few days.

But then on Tuesday, Phillips refused to back down from his name-calling. His manager, Dusty Baker, offered a half-hearted expression of disapproval over Phillips' actions. But Baker didn't get his guy under control. And then - in an act of transparent phoniness - Phillips tapped Molina on the shin guards in a traditional baseball greeting, as if they were buddies or something.

Molina essentially told Phillips: You don't talk bad about my team like that, and then come up here and act like everything is OK.

The Cardinals were ready to go. Of course they were. How many times would any self-respecting group of individuals allow themselves to be called the kind of names that Phillips hurled at them? Of course Molina snapped. He had been provoked. I don't think a tough-guy catcher likes being called a "bitch" by Phillips.

What Phillips didn't know is that he'd turned the screwdriver, yes, he did - but against his own team. Phillips gave the Cardinals a shared sense of purpose. In pulling into a tie for first, the visitors rose up and smacked the Reds around for the second consecutive night. The Cardinals have won the first two games of the series by a combined 15-7 score.

Is that a statement?

"I know our guys," La Russa said. "This is not the first time we've been challenged. You just go up and down our roster and we've got a bunch of guys who are very tough characters. There are times that you beat us where we're not good enough. But you're never going to scare us. And we're never going to back down."

Conversely, the Reds became unglued Tuesday, making three errors and poor decisions. Cueto - who was kicking at Cardinals' players during the brouhaha - was completely out of steam after 51⁄3 innings. This would-be Bruce Lee ran out of kicks too early, after the Cardinals had pelted him for seven hits and four earned runs.

On one level, this was serious stuff. I don't think Cardinals fans enjoyed the sight of Carpenter getting bulldozed into the backstop, vulnerable to injury. Other than No. 2 catcher LaRue - who may have suffered a concussion after being kicked by the gutless Cueto - no one got hurt.

"I was in the (backstop) net with somebody kicking me from behind," Carpenter said, "... I was held down. I couldn't do anything. I wasn't throwing any punches. And we've got some guy kicking me and kicking my backup catcher in the face. He could have done some real damage. He got (LaRue) on the side of the eye, got him in his nose, got him in his face. Totally unprofessional. Unbelievable. I've never seen anything like that. I don't know where he learned to fight."

And though Carpenter was burning, I'm still laughing at this part: an adult athlete kicking during a fight, instead of squaring up like a man? Is that the best Cueto can do? Wow.

Brandon Phillips may have a word for that.

Phillips sticks to his comments