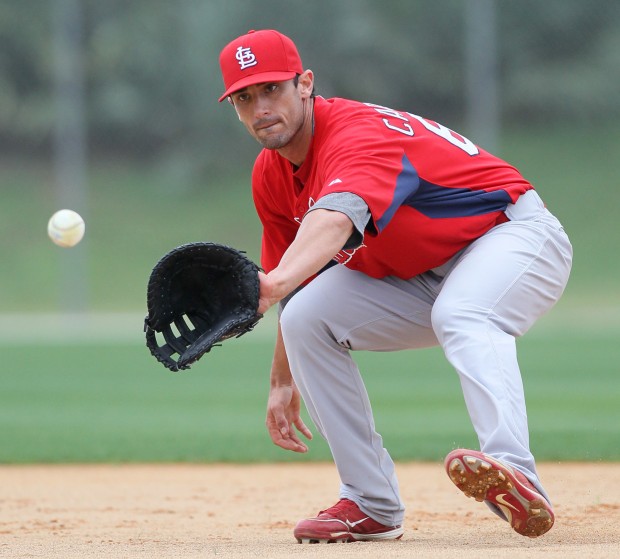 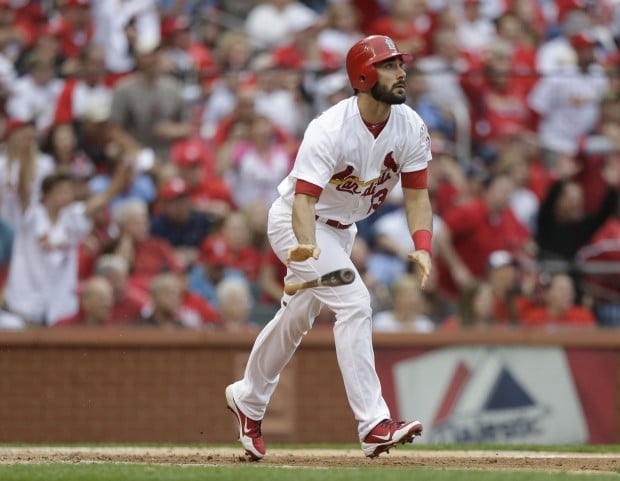 Matt Carpenter drops his bat as he watches his two-run homer in Game 3 of the National League Championship Series on Oct. 17. (Photo by Chris Lee / clee@post-dispatch.com)

Given a homework assignment during this offseason to practice playing second base, Cardinals utility player Matt Carpenter realized the best way to learn a new position was not fielding the same old groundballs.

So he started skipping rope.

Carpenter, a third baseman by trade, has shaped his offseason around what goes into playing the pivot.

When it comes to fielding grounders, only the view is different, but turning double plays and throwing from an unfamiliar angle puts a focus on footwork.

He’s reviewed video. He’s enlisted help from his father, a high school baseball coach. And he’s sought improved foot speed and agility through workouts such as jumping rope. If he can make the turn this winter, second base will offer something all his other positions combined cannot — a regular’s playing time.

“Obviously I wouldn’t be telling the truth if I said I didn’t want to be out there every day,” Carpenter said in a recent phone interview. “The reality of that at the positions I really play isn’t very good. If I’m going to be a guy who plays every day, it’s going to be second base, not third or in left field or right.

“I want to win that job. And worst case, if I can only be adequate (at second base), I could still get a few extra games out there and instead of 300 at-bats, I’ll get 400 at-bats.

“If I can earn their trust out there at second, that’s possible.”

Carpenter, 27, spent all of 2012 with the major-league club as a super sub, appearing at five positions in a total of 66 starts despite being sidelined a month because of injury.

He hit .294 in 296 at-bats with 46 RBIs, a .463 slugging percentage, and then provided a prominent jolt in October. When Carlos Beltran strained his knee in the first inning of Game 3 of the National League championship series, Carpenter stepped in and, in his first at-bat, provided a two-out, two-run home run that created the 3-1 victory.

Manager Mike Matheny described Carpenter then as he did during the season — as an “offensive spark.” The second base project is an attempt to kindle it.

“There were quite a few times that we were looking for ways to get him into the lineup,” Matheny said. “He was a catalyst for us. His versatility would give us a lot of options.”

Before Carpenter left St. Louis for the offseason, Matheny pulled him aside and suggested that he arrive at spring training prepared to compete at second base.

Matheny joked later that knowing Carpenter, he probably started taking grounders there the next day. He didn’t.

“But it wasn’t too long after that. Maybe a few days,” Carpenter said. “Not being an everyday player for the first time, I felt great physically at the end of the year. But I also felt great mentally. I wanted to get to work.”

As he got ready to go home for Christmas, Carpenter had been taking grounders and turning double plays at second base at least five days a week for more than a month. His father, Rick Carpenter, who coaches baseball at Prosper (Texas) High, expected to spend the holidays on the field with his son.

“He wanted to go out over Thanksgiving and take grounders,” Rick said. “I hit him 100 that day. He’s getting after it.”

That includes doing things for second base without a glove on his hand.

Matt Carpenter outlined how his daily workouts have been tailored to increase his nimbleness. The nagging ankle injury that slowed him late in the season has healed, and because of various activities, including skipping rope, Carpenter said he senses greater lateral movement and a “lighter, more athletic” feel.

He also can sit still and improve at second.

At the suggestion of third-base coach Jose Oquendo, the Cardinals’ resident fielding instructor, Carpenter downloaded video clips of all 149 of the Cardinals’ double plays in 2012. He has watched each of them at least twice for tips and trends: where Rafael Furcal feeds the ball, how Daniel Descalso uses the base as protection, and when opposing runners will look to upend the second baseman.

The Cardinals hope Carpenter will meet Oquendo in person at least once this offseason, and he will report early to spring training for added one-on-one work.

“It’s all about his offense and having a way to get him everyday at-bats,” Cardinals general manager John Mozeliak said. “It’s what he’s doing on offense that brought this up.”

It’s not, after all, the first time the Cardinals have done this. Before the 2009 season, then-manager Tony La Russa asked career outfielder Skip Schumaker to try second base. The goal then, as it is now, was to invent playing time for a hitter.

As Matheny and Mozeliak surveyed the 2013 roster, they recognized it’s conceivable the eight regular position players will return. Descalso, who had a down year offensively, emerged as the regular at second base because of his proficient defense. To change the offensive look of the lineup for next season, second base is open for an upgrade. That could come from Descalso or a list of candidates that includes first-round pick Kolten Wong and now Carpenter.

As a group, Cards second basemen hit .240 with a .672 on-base-plus-slugging percentage last summer. Both stats were the third lowest in the National League.

This winter, the Cardinals have eyed some outside options for second base, discussing such players as Asdrubal Cabrera and free-agent Marco Scutaro.

The market is thin. Former All-Star Freddy Sanchez, who has not played since 2011 because of injuries, is available. He has received interest from teams but no offers. Matt Sosnick, his representative, said Sanchez is healthy and looking for plate appearances to re-prove his worth.

The Cardinals teased this possibility last summer by starting Carpenter twice at second. In total, he played 18 innings at second base this past season. That is 18 more than he had ever played. But for a new position there isn’t all that much new about this winter. A year ago, he found a winter league team that would let him get reps in the outfield so he could show the Cardinals he could play there. He learned first base on the job, starting there 15 times in April. This is the same song, second verse. What he’s working on may be different.

What he’s working for isn’t.

“That’s why you can’t bet against him on this second base move,” his father said. “The guy is going to put the work in. The thing he always has in his favor is how hard he’ll work for it.”

Yadi's older brother surprises himself by breaking into coaching as an assistant hitting instructor.

As the Cardinals consider middle infielders, their eyes will wander to the future – and answers perhaps a year away.

Matt Carpenter drops his bat as he watches his two-run homer in Game 3 of the National League Championship Series on Oct. 17. (Photo by Chris Lee / clee@post-dispatch.com)