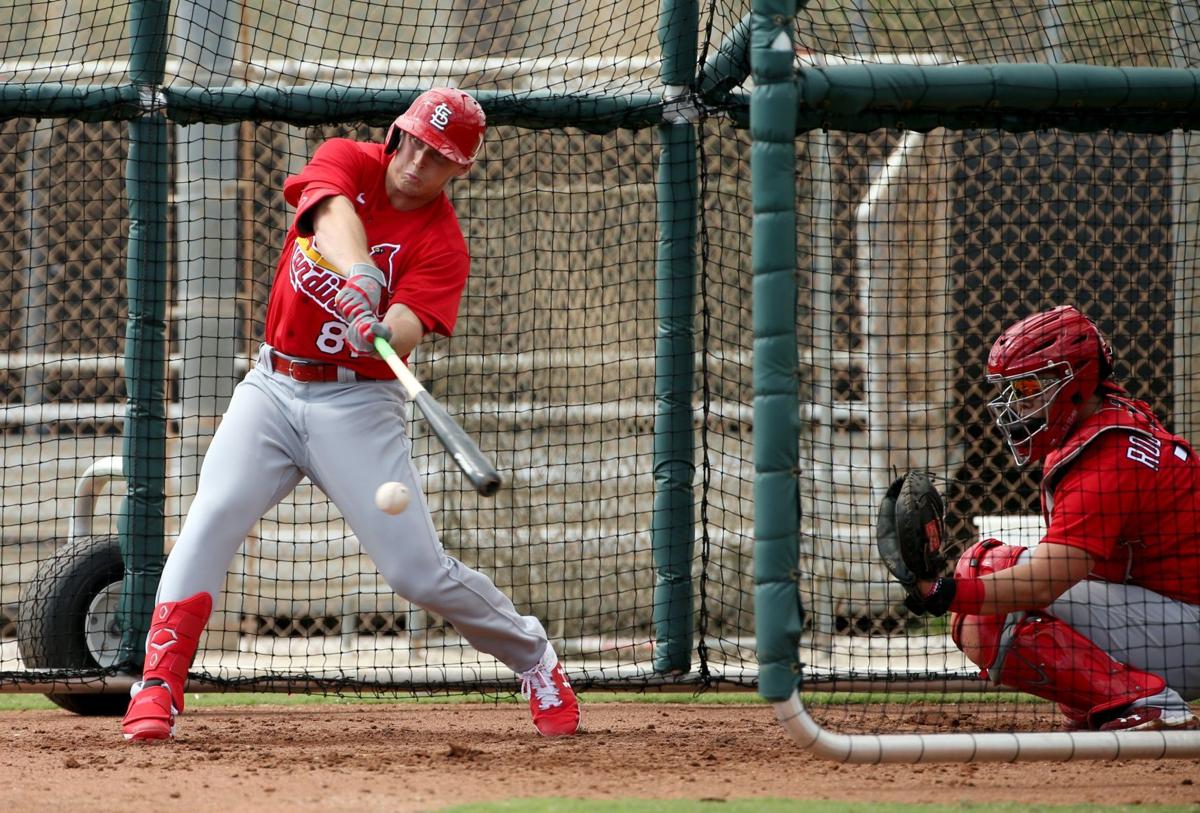 With sensors strapped to his torso, hands, arms, and hips, Nolan Gorman had a feel this winter for what the gizmos were going to tell him about his swing. He had heard the tell-tale percentages and statistics from last season, too. But once he watched all that data uncoil from a knot of metrics into a digital model of his swing and what it could be, Gorman sensed what he had to do.

The Cardinals’ slugging prospect saw how the twist of his hips lagged after the timing of his hands, saw how being ahead of the competition in high school had created habits that put his swing behind as a pro. Instead of sweeping his bat through the strike zone, he was flicking it, as if fly-fishing for a pitch. The numbers told him his swing had an inefficiency.

The visual showed him how to crush it.

“Once you see it, you really understand it,” Gorman said Wednesday. “I am a visual learner. It painted a really good visual for what I’m trying to do, and then I could see myself do it. I feel like my swing is in a much better place than it has been probably ever before.”

Before spring training halted, Gorman gave a glimpse of what the Cardinals expected to be a breakout season. In his first major-league spring training, the 20-year-old third baseman appeared more balanced in the batter’s box, and he acknowledged he felt more comfortable and thus confident. Three of his eight hits in the Grapefruit League went for extra bases. Three of his four RBIs came in a game that he wasn’t scheduled to start until an injury thrust him into the lineup. But just as revealing were his five strikeouts in 28 plate appearances.

Gorman, the 19th player picked in 2018, entered the draft as the top prep power prospect — with all of the gust that implies for the majesty of his home runs and the amount of strikeouts. Last summer, at the Cardinals’ Class A affiliates, the lefthanded-hitting infielder fortified his place as a top prospect in all the minors with 45 extra-base hits. Only four players his age or younger at full-season teams had more homers than Gorman’s 15.

Scouts call his power a “carrying tool,” as in it will carry him to the majors. Gorman said this winter he aspired to be similar to Mets great David Wright, and an AL scout who did not know of Gorman’s fondness for the All-Star remarked how “Gorman’s legit, and there are glimpses of Wright in there.”

The Cardinals are encouraged that Gorman’s improved defense put his future at third base, and that his upside is a masher in the middle of their major-league lineup. At some point this season the Cardinals had planned to promote him to Class AA Springfield, at age 20, and see how he feasted on a hitter-obliging Texas League.

That level is a tipping point in any prospect’s progress — where the proximity to the majors means potential energy must convert into production.

“As I say to them all the time, the Double-A level is where we talk about how the stats turn into performance,” Cardinals farm director Gary LaRocque said. “All the projection in the world, and it must come down to performance at some point.”

With tips from top prospect Dylan Carlson — who joined Gorman at the Futures Game last year — the third baseman was prepared to ignore his numbers at the hitter-stifling Florida State League, and still he hit 16 doubles after a midseason promotion. Only Carlson and Class AAA outfielder Adolis Garcia had more plate appearances in the Cardinals’ minors than Gorman, and few his age had Gorman’s loft. Of the players 19 or younger who saw at least 1,800 pitches last season, Gorman alone had more fly balls than grounders. (“That’s a good thing,” he said when told.)

Exit velocity and launch degrees define Gorman’s swing, but within the alphabet soup of metrics, he also learned something else this winter. His “on-plane efficiency” was lower.

Using tech, the Cardinals were able to track Gorman’s swing path to a pitch or past it. His swing’s whip through the zone meant he “had to have perfect timing,” he said, and that left him behind on covering some pitches and led to swings and misses instead of contact. To better understand the tech-infused lingo and his swing, Gorman spent five days going through an assessment at the Seattle-based Driveline facility. He saw the difference from Day 1 to Day 5 — and because he saw it, he could duplicate it more consistently.

With additional work at a Cardinals’ hitter camp, Gorman bought into the drills, invested in an armful of equipment — a K-Vest to measure his movement, a Rapsodo radar, and the Blast device for his bat — and revved up for spring.

“I knew I wasn’t going to have to find my swing for spring, I know I could be consistent, and that I could perform,” Gorman said. “Taking all those game-like reps I had the confidence in it, that it was going to work. Not the confidence you get from going against a pitcher throwing 30 feet at 50 mph or doing flips. Confidence that comes from a game. You have to create game-like situations for you to really test and know your swing, and build that confidence.”

He was poised to unleash that swing on the season until the season didn’t start and the minor-league season is in doubt. Gorman returned home to the Phoenix area, unpacked his tech, and plunged back into the batting cage. He saw some price-gouging on weight equipment but with some savvy shopping outfitted a mini-gym in his garage to maintain strength. He also finalized a promotional agreement with a line of clothing from the Utah-based designer, TruWear.

In the past few weeks, a baseball facility, Phoenix's Fuel Factory, reopened and he’s been able to go there to hit, and to stand in and watch teammate Matthew Liberatore or former Cardinal starter Edwin Jackson throw bullpens. On Tuesday, he dialed the pitching machine up “a little further than what’s recommended.”

The swing kept up.

He’s been focused on “training at game-speed.”

He just needs a game.

So others can see what he does.

This is the fifth in an eight-part series that takes a detailed look at the Cardinals’ future at every position – for now. In order to forecast the next star to arrive or the next hole the club must fill, we considered only prospects that were in the organization as of spring 2020 and that have not yet played in the majors. The current players and their contract status is also detailed for context.

A total of 16 players drafted by the Cardinals in 2018 and 2019 were released on Wednesday as part of sweeping transactions throughout pro baseball.