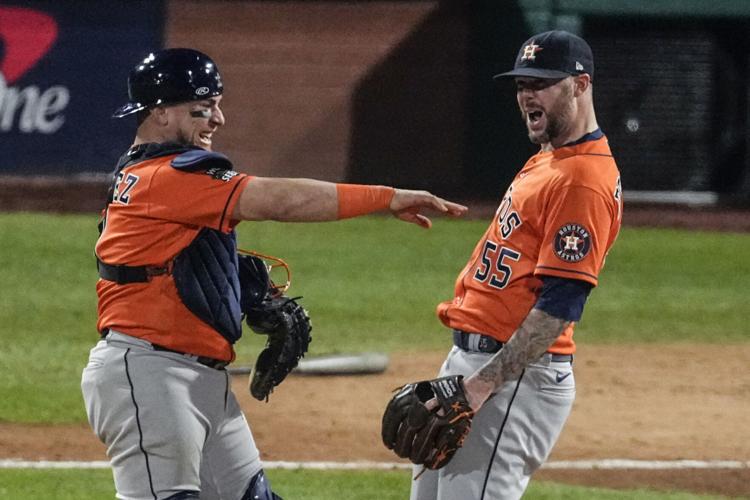 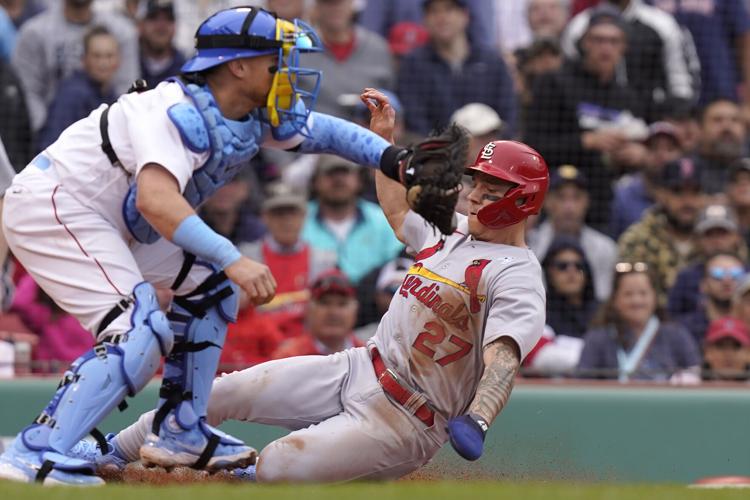 HOUSTON — When veteran catcher Jason Castro’s season ended with knee surgery, the Houston Astros had two talented prospects ready to step into the backup role and one telling concern.

They weren’t sure, general manager James Click said, if turning to inexperienced catchers at that vital position was wise for a World Series contender, so Houston went shopping. They reached out to acquire at the trade deadline an established starter, Boston’s Christian Vazquez, to serve as a backup — or more, if needed.

“That’s a lot to ask of those young guys at this point in their careers, so we wanted a level of depth just in case something happened in the last two months of the season,” Click told the Post-Dispatch this past week. “Vazquez is a veteran performer, knows how to handle pressure environments both behind the plate and at the plate. A high-contact, quality at-bat at the plate. All the things we knew had value.

“First of all — a veteran postseason catcher.”

That all sounds familiar.

For the first time in a generation the Cardinals will be searching this offseason for a starting catcher, a squatter to take over after the retirement of franchise fixture Yadier Molina. John Mozeliak, president of baseball operations, has mentioned the position first when publicly discussing offseason priorities. Some of the traits the Cardinals prefer in their next catcher are the same ones Houston sought, and for the same reasons as an aspiring contender. It could lead them to the same option: Vazquez, a free agent in a few days who has significant ties to Molina.

This past week, in Game 4 of the World Series at Philadelphia, Vazquez joined St. Louis native Yogi Berra as the only catchers to call a World Series no-hitter. Vazquez is the first catcher to pilot a combined no-hitter in the postseason. For Game 6 on Saturday night, Vazquez started at designated hitter to try to spark that spot in Astros’ lineup. He had an RBI single in the sixth inning.

Earlier in his career, Vazquez texted Molina asking for advice on how to become a better leader, and that sparked a series of suggestions from Molina about building trust with the pitching staff. Vazquez adopted “all the little stuff he told me to help me get better every day.” In a few months, he’s eager to play for Molina — “a gamer, a winner,” Vazquez said — on Team Puerto Rico in the World Baseball Classic. Vazquez and Molina also have the same agent.

“It’s going to be tough to replace all that (Molina) brings,” Vazquez said during batting practice this past week. “All those years with Yadi in St. Louis, all those things he did. It’s going to be tough. But, let’s see what happens. I’m ready, and there are 30 teams.”

He added his father has always been a big Cardinals fan.

Vazquez, 32, will be a free agent for the first time — and it comes at a time when his career was suddenly upended by a trade and dramatic change in role. Houston acquired Vazquez while the Red Sox were in Houston, meaning Vazquez was on the field warming up in the only jersey he had known while another was about to be stitched for him in the opposing clubhouse. He started 78 of Boston’s first 103 games, took pride like Molina in being a long-haul catcher, and then — blink — and he’s a backup, not guaranteed much playing time behind Martin Maldonado. He made $7 million this past season.

Not much, that is, other than a chance to win. He warmed to that opportunity, even as he explained shifting teams helped him realize what he’d chase as a free agent.

“Happiness, honestly,” said Vazquez, who was Boston’s catcher for its 2018 World Series championship. “Obviously playing time — a lot. And obviously peace for my family. I think that is going to be very important. And to win. Once you taste a ring — or maybe two rings after this year — you need to be like that all the time, tasting that postseason again.”

When the free agent market opens this week, the options at catcher include the superior offensive addition in Willson Contreras, of Cubs fame, and some defense-first options that have seen slides in production. Via trade, there is the likelihood Oakland entertains offers for Gold Glove-winner Sean Murphy, 28. Toronto has three catchers from which to deal one, though it’s not clear the Blue Jays are eager to move All-Star and all-around catcher Alejandro Kirk, who is 23. The Cardinals are well-positioned to make an offer for any catcher made available based on their farm system, according to scouts with other teams.

Mozeliak described how the Cardinals have been spoiled with “an elite defender for the last 20 years” and do not “want to take a huge step back defensively.”

Vazquez lands on the defensive end of the spectrum. A career .261 hitter, he also has a .695 career OPS. As a starter for Boston, he had a .759 OPS to go with a .282 average this past summer. Since 2019, his first year with at least 100 games played, Vazquez is tied with Gold Glove-winner catcher J.T. Realmuto, the Phillies’ star, with 22 Defensive Runs Saved, per Sports Info Solutions. From 2016 to present, Vazquez’s 37 Defensive Runs Saved are tied for the sixth-most with his teammate Maldonado.

Sports Info Solutions also calculates how many runs a catcher helps his pitchers avoid by framing pitches for the strike zone, and Vazquez’s 37 Runs Saved that way rank fourth since 2016, his second season in the majors.

That steady hand is what the Astros counted on, and what they bet on was the willingness of Vazquez to accept a reduced role during the season for what was possible in the postseason.

“He’s a great addition for us in the clubhouse and on the field because he has a lot of experience in the postseason and a World Series championship and he’s become a great complement,” Houston’s Aledmys Diaz said. “He’s a leader between the lines. He helps a lot behind the scenes. We have two everyday catchers and they’re able to compromise and put the team first and forget about numbers and egos because they want to win.”

With Javier on the mound for Game 4, Vazquez drew his first start of the World Series and only his second of the postseason. What followed was history. Not since Don Larsen’s perfect game in 1956 had one team in the World Series held the other without a hit. Not since Berra had a catcher raced to the mound to celebrate finishing a no-hitter in the World Series. After it, Javier praised the presence Vazquez was behind the plate, in his ear: “He stayed on top of me, continued to motivate me throughout the game, and gave me really good positive energy.”

The National Baseball Hall of Fame asked the four pitchers to sign a game ball from the combined no-hitter — and also Vazquez.

“It was that ability to both execute a game plan and also react to the situation in the moment, read the hitter, adjust and maybe even go away from the game play,” Click said. “Having a veteran who has been there, has learned in these kind of environments, handled this kind of pressure, is something we really prioritized.”

And, in a few days, it’s Vazquez’s turn to prioritize.

“It’s going to be cool,” Vazquez said. “I’ve been waiting for that opportunity to be a free agent, to find out.”

As Pujols retires, do his bats?

In the Cardinals’ clubhouse this past spring, a teammate grabbed one of Albert Pujols’ Marucci AP-5 model bats, gave it a quick swing, and lamented how he’d never get to use it in a game.

Pujols’ bats and the limited players who could use the model became a brief topic in this year’s World Series when Maldonado used a bat given him by Pujols in Game 1. Major League Baseball told him to shelve it before Game 2 because it’s a model permitted for use by a few players, all of whom debuted before 2010. Pujols and Molina were among the last remaining players permitted to use the bat model, they both acknowledged during the season. A Marucci contact declined comment on the model’s future this past summer.

The AP-5 was one of Marucci’s original models and its popularity and quality aided the bat manufacturer growth into one of the most ubiquitous in the industry.

In 2008, MLB had an expansive study on bat types and how they splintered, and the results of that study led to standards to reduce the number of multi-piece breaks. Among them, MLB reduced the maximum diameter of the barrel to 2.61 inches from 2.75 inches. Players who were in the majors before the new rules could continue to swing previously permitted models for the remainder of their careers.