DeWitt: Cardinals budget for 2021 not 'hard and fast' as team wants contender 'our fans deserve'
0 comments
Share this
{{featured_button_text}}
1 of 2 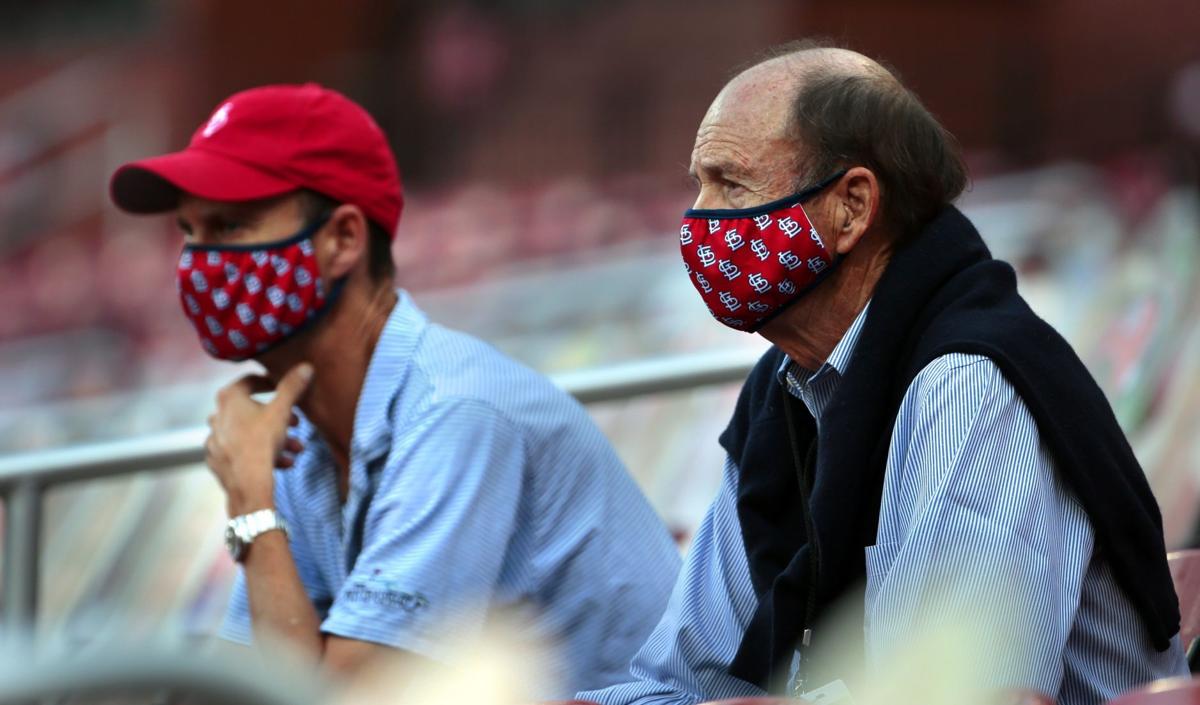 St. Louis Cardinals owner Bill DeWitt, Jr., right, and president Bill DeWitt III look on as the team prepares to close out the Milwaukee Brewers and head to the playoffs on Sunday, Sept. 27, 2020 at Busch Stadium. Photo by Robert Cohen 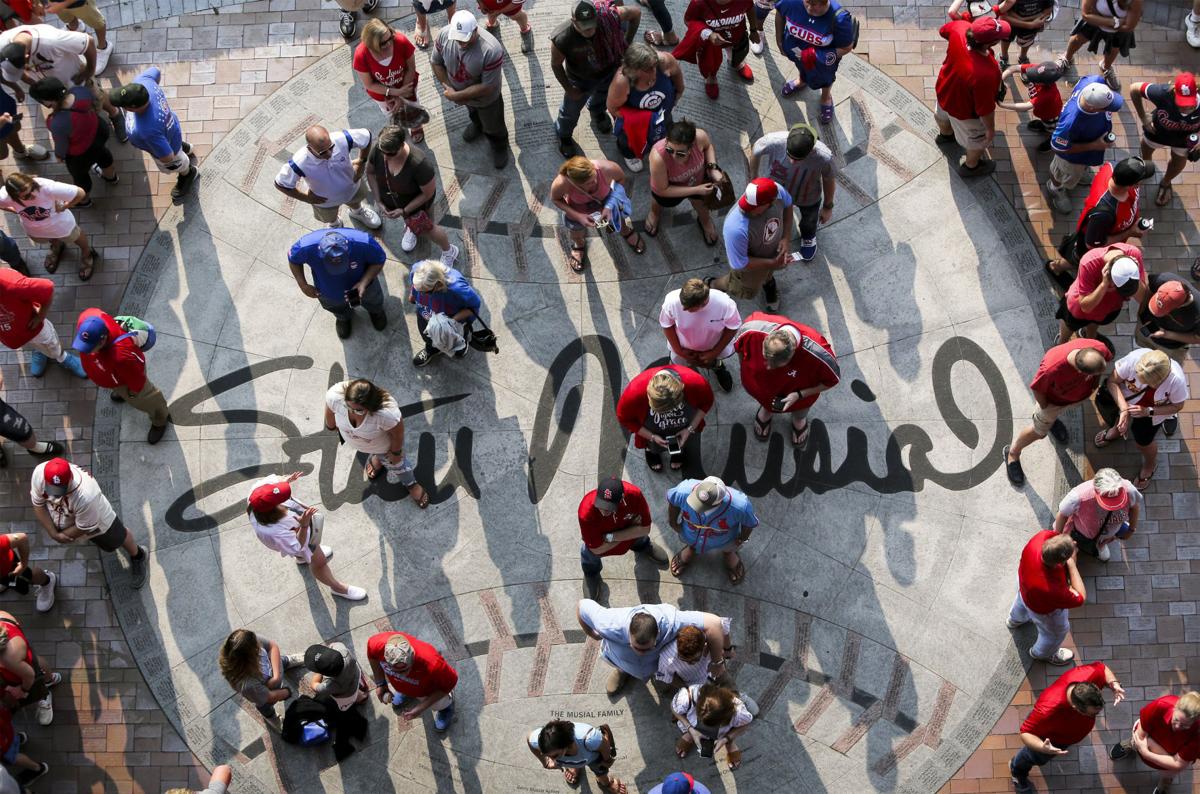 Fans wait to enter Busch Stadium before the start of the home series against the Chicago Cubs on Friday, May 31, 2019 in St. Louis. (Colter Peterson, cpeterson@post-dispatch.com)

One of the earliest, thriftiest indications of a falling barometric pressure in baseball and the financial storm clouds roiling into view came at the start of the offseason and in the middle of the Cardinals’ infield.

A team that has long prided itself on a willingness to spend and extend on homegrown players opted not to exercise its $12.5-million option for 2021 on Gold Glove second baseman Kolten Wong’s contract. It was one of many options declined throughout the majors — one of the largest, too — and the decision signaled how the Cardinals intend to trim certain, guaranteed costs headed into a winter of uncertainty. After a shortened season of zero attendance, slashed revenue, and a persisting global pandemic, the Cardinals expect to reduce payroll for 2021.

By how much and to what target is as unknown today as the number of games they’ll play and number of fans who will attend them.

“We’ve always made every attempt to be competitive, year after year,” chairman Bill DeWitt Jr. told the Post-Dispatch last week. “We’re not going to change that approach because that’s what our fans expect, and that’s what our fans deserve. . . . (Declining the option) enables us to have flexibility for sure. We don’t know what our payroll will be in the coming year. competitive team even in pandemic

“I’m not going to go there at this point because I don’t know,” he continued. “It’s not like we have a hard and fast budget. It’s fluid.”

The Cardinals are generating a variety of models to determine their financial outlook for 2021, and that includes everything from a reduced schedule to a full house at Busch Stadium, something officials think is unlikely for the coming season. When asked if that list of unknowns restricted player acquisitions at this time, DeWitt said his baseball operations group has the green light to sign a free agent. Indeed, the team continues to talk with Yadier Molina and Adam Wainwright about their returns. But the preference is to avoid substantial commitments, such long-term offers. At least until they know more about 2021.

A sign of their uncertainty is that the Cardinals have not yet begun the renewal process with season-ticket buyers, DeWitt said. They don’t know how many games or how many seats they’ll have to sell, or the local policies that will determine that.

The Cardinals have long tied their major-league payroll to their ticket sales. They have lauded a fan base that reliably sends 3.4 million through the ballpark turnstiles, has annually been top five in attendance, and allowed the club to spend beyond its market size. Their financial “model is heavily attendance-based,” an executive said this past year. That stream of revenue turned off this season.

The Cardinals, a private business, and DeWitt declined to disclose specific losses.

Through other teams it’s possible to gain an understanding.

After 17 consecutive years of increasing revenue and $10.7 billion in 2019, according to Forbes, Major League Baseball claimed a revenue loss of slightly more than $3 billion for 2020. The Colorado Rockies did the math for their season-ticket holders and told them, in a letter, teams averaged a revenue loss of $100 million.

The Cardinals were close to that average, if not slightly above, sources confirmed.

The recent sale of the New York Mets for a reported $2.4 billion show the increasing value major-league teams have when eventually sold. Projected values and past profits make headlines and do illuminate the money in moneyball. But they don’t firewall an industry from the steep, unprecedented losses of 2020 and strained cash flow.

The Chicago Cubs claimed a loss of $140 million this season and expect a $120 million loss for 2021, The Athletic reported. The Brewers’ get 30% to 40% of their budget from game revenue, the Milwaukee Journal-Sentinel reported Sunday, and would not reveal to the paper if the $100-million average was an “appropriate figure” for their losses.

The Atlanta Braves’ parent company, Liberty Media, is publicly traded, and that makes the Braves the clearest spyglass into major-league finances.

In an earnings call earlier this month, Liberty Media CEO Greg Maffei, according to the Atlanta Business Chronicle, said, “The reality is baseball lost a lot of money this year. And unless fans are in the seats next year, it will be a challenging business as well.”

The Cardinals are in the Braves’ revenue vicinity, a comparable team, major-league officials have told the Post-Dispatch. The Cardinals usually rank near 10th in local revenues, between eighth and 12th annually. The team has said it uses those revenues to budget a payroll they aim to rank in or near the top third. They ranked 10th in payroll in prorated 2020 salaries, at $73.2 million, per Sportrac.

Atlanta has a brand-new ballpark and a development not unlike Ballpark Village. The Cardinals’ BPV retail and hotel had reduced revenue because of the lack of games and pandemic. A new apartment building is at 85% capacity, an official confirmed. Atlanta has a richer television contract to create some gap, but this season even the broadcast deals were diminished. The Cardinals, who have an ownership stake in their broadcast affiliate, were set to receive an estimated $58 million to $60 million in 2020 from their 15-year deal with Fox Sports Midwest. But that’s prorated, at about $450,000 per game, according to a source. No games to broadcast, no fee.

The Cardinals paid salaries in their ballpark operations through the end of October, but like many teams in the majors have had layoffs and downsizing since. Some expiring contracts were not renewed, and seasonal or part-time employees had their positions eliminated, pending what’s needed for the 2021 season. Dozens of jobs were reduced on the baseball side, including former players serving as special assistants and coaching staffs for several minor-league affiliates that are being cut as part of a game-wide reorganization.

DeWitt agreed that investing in the product is part of what will bring fans back to the ballpark when it’s possible. He was asked if the Cardinals are in position, because of the financial landscape, to augment their current roster.

“To be competitive year in and year out? Yes, I do,” DeWitt said. “The fans have always been supportive and enable us to do the things that help us be competitive. They’re a driving force in our franchise — always have been, and always will be. They enable us to do what we do, which is to try and be among the top group in expenditures on player acquisitions, and if we make the right moves and draft the right players we look forward to having continued success.”

He reiterated ownership’s interest in having Molina and Wainwright, cornerstones of this era and 13 consecutive winning seasons, re-signed this winter.

“We’re interested in having them back,” he said. “They’ve obviously both been great Cardinals, been with championship teams, and they mean a lot to our franchise. That obviously plays a part in our discussions with them. Not to mention the fact that they’re both productive players.”

The free-agent market has been slow to warm, and player and agents are braced for another flood of available players in early December as teams reduce payrolls by not offering arbitration-eligible players contracts for 2021. Like the declined options of November, the non-tenders of December cut costs and could reduce salaries by creating more supply than demand. The Cardinals see dropping Wong’s salary from 2021 as a way to “allocate” that money in other ways.

John Mozeliak, Cardinals president of baseball operations, said last week that he expects the pace of the offseason to “feel slower.” An agent who represents several of the top free agents available said he hears a similar echo as teams insist they’re setting budgets and bracing for uncertainty as a pandemic spikes, a vaccine reportedly nears, and a season awaits clarity.

The one thing all teams can buy is time.

“I’m sympathetic to the players, too,” DeWitt said. “They may feel like if everything’s great and we play a full season with fans then teams are able to do one thing. Whereas, if you can’t have fans or you have other limits, who knows what teams can do? There is uncertainty. The good news is that we have a number of months to go here. I know everyone wants a decision today or tomorrow, but it’s not realistic.

“As time goes on, we’ll learn more, and we’ll be able to adapt.”

Theo upped the stakes in the NL Central. He changed Cardinals history by changing Cubs history.

St. Louis Cardinals owner Bill DeWitt, Jr., right, and president Bill DeWitt III look on as the team prepares to close out the Milwaukee Brewers and head to the playoffs on Sunday, Sept. 27, 2020 at Busch Stadium. Photo by Robert Cohen

Fans wait to enter Busch Stadium before the start of the home series against the Chicago Cubs on Friday, May 31, 2019 in St. Louis. (Colter Peterson, cpeterson@post-dispatch.com)