Tommy Lasorda, seen in 2018, was the fiery Hall of Fame manager who guided the Los Angeles Dodgers to two World Series titles and later became an ambassador for the sport he loved during his 71 years with the franchise. He died on Thursday, Jan. 7, 2021, of a heart attack at his home in Fullerton, California. (AP Photo/Damian Dovarganes) 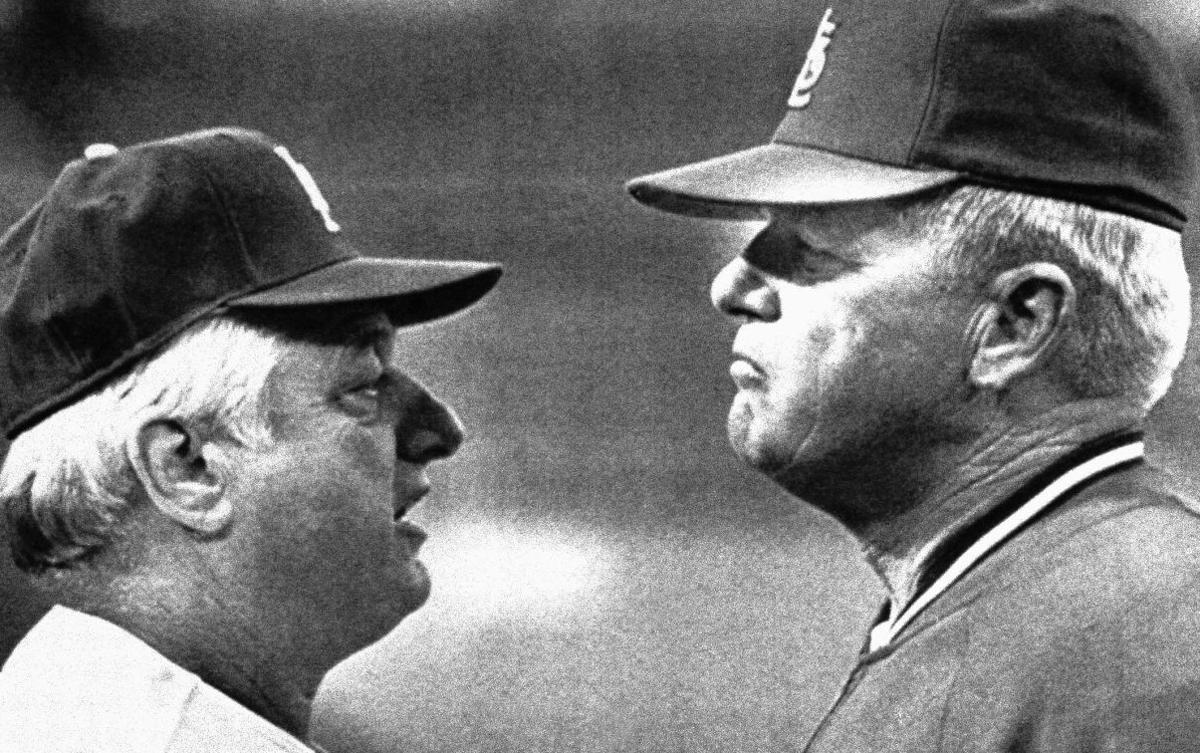 Managers Tommy Lasorda of the Los Angeles Dodgers, left, and Whitey Herzog of the Cardinals meet before for the start of the 1985 National League Championship Series.

The death toll continues to rise in Cooperstown, N.Y.

In nine months, eight baseball Hall of Famers have passed away. And now, after 93-year-old former manager Tommy Lasorda died of a heart attack in his Los Angeles-area home Thursday night shortly after he had been released from a long stay in a hospital, former Cardinals manager Whitey Herzog is the second-oldest living Hall of Famer, having turned 89 in November.

Herzog, second in age by six months to New York/San Francisco Giants star Willie Mays, spent some 11 seasons managing against Lasorda — including the Cardinals’ 1985 National League Championship Series victory over the Dodgers in which Lasorda memorably chose to let Tom Niedenfuer pitch to Jack Clark with a base open in the ninth inning of the decisive Game 6.

Clark hit a game-winning homer. And Herzog often would thank Lasorda for pitching to Clark when they were at functions together in their retirements and Lasorda would respond, more or less jokingly, with an unprintable.

At the time, Lasorda had former Cardinals lefthander Jerry Reuss ready in the bullpen to face lefthanded-hitting Andy Van Slyke, potentially with the bases loaded. Brian Harper would have hit for Van Slyke.

Reuss said Friday that before the series Lasorda had held a meeting in which he specifically said that Clark would not be allowed to beat the Dodgers.

“If there’s one person in this lineup we’re going to pitch around with the game on the line, it’s Jack Clark,” Reuss recalls Lasorda saying. “He paused and he said, ‘I want to make this clear. We will pitch around Jack Clark if we have to.’”

Reuss was preparing to face Harper “but we never got there,” he said. “And you saw the results.”

Cardinals lefthander Rick Horton, who was there that day, noted that while Lasorda might have erred in this instance there also was a vital moment in Game 1 of the 1988 World Series that turned out differently. That was when Lasorda sent up limp-legged Kirk Gibson to pinch-hit against Oakland’s Dennis Eckersley in the ninth inning and Gibson responded with a shocking two-run homer to win the game.

Horton, then a Dodgers reliever said Friday, “I don’t think Tommy regrets putting Kirk Gibson up on one leg, which I thought was a terrible idea.”

Although the two hadn’t talked in nearly a year, Herzog and Lasorda were close friends.

“When Tommy was healthy, he would talk to anybody. He’d be sitting in a room by himself and he’d be talking to himself,” Herzog said, chuckling. “He was never at a loss for words. And being around all the movie stars he had sitting in his box and in his office all the time, he was . . . well, he was Hollywood.”

Horton played on championship clubs for both managers, winning his only World Series ring in 1988 with the Dodgers for whom Lasorda won two World Series and four pennants in 21 seasons. Lasorda’s final game was on June 23, 1996. It was the day before Lasorda drove himself to a hospital having experienced a heart attack.

“If you were around him, you knew he was a great ambassador for the Dodgers and for baseball but also for the country,” Horton said. “He was very patriotic in a lot of his comments (Lasorda also managed a team of minor-leaguers to a gold medal in the 2000 Olympics). “Some people thought he was off-putting because he was so effusive but I liked it. He was more genuine than a lot of people may have realized.

“I’d see him kind of playing up to the cameras and he knew how to do that, but I also saw him remembering every name of every kid of players on the Dodgers’ team, including my daughter, who was 2. He took time for the off-camera things, too. That’s the Tommy I knew.”

Reuss, the former Ritenour High and Cardinals star who played for Lasorda for eight seasons, said, “He reached out to a lot more people than most anybody else who was involved with the game. Towards the latter years of his life, he helped out a lot of people with different charities and never was really noted for it.

“But he also was the manager where he made sure he got the publicity. A lot of things going on with one person.”

Lasorda and his staff would dine at Charlie Gitto’s downtown whenever the Dodgers were in town. Gitto, who died last July 4 at age 87, and who was one of Lasorda’s closest friends outside baseball, had a table inscribed as “Tommy Lasorda’s Table,” which, of course, is where Lasorda and his entourage sat when they came into the restaurant. Gitto was careful to let only whom he considered the elite sit there when Lasorda wasn’t in town.

When Lasorda was in Los Angeles, “he never had any baseball pictures on his walls,” Herzog said. “It was always the Sinatras and the Crosbys.”

“He enjoyed being with the stars,” Reuss said by telephone from his home in Las Vegas. “And they were equally enamored of him as he was with them. He’d invite them into the office and have the players come by and say hello. He was also comfortable with people in the media, politicians, religious leaders — he treated everybody with the same kind of dignity.”

From his home in Sunset Hills, Herzog said, “He was good for baseball. There was something about him — baseball and Dodger Blue — when he’d sign an autograph, he didn’t say, ‘Best wishes,’ He’d say, ‘To Rick, the Dodgers love you.’”

Like Herzog, Jim Leyland managed against Lasorda for more than a decade with the Pittsburgh Pirates.

“He was a fierce competitor,” said Leyland, speaking from Pittsburgh. “There’s no question that he was the greatest Dodger ambassador ever. He was a charmer. If you went into his office, it was like you were on Broadway. And . . . he was probably the best public speaker I ever heard. If he went before me, there weren’t many people left when I got up there.”

Herzog said, “I always say I was lucky that I got to manage against him and Sparky Anderson. Those were two of the guys I was closest to and they were both in the National League but I had known them from the minor leagues (as players) before they ever got to the big leagues.

“We were all lousy players, but I guess I was the best of the three.”

Lasorda, who was sold to the St. Louis Browns for $50,000 at one point before owner Bill Veeck balked and withdrew his offer, was 0-4 with a 6.48 earned-run average in brief stints as a lefthander with the Brooklyn Dodgers and Kansas City Athletics.

Anderson, a light-hitting second baseman who died in 2010, batted .218 in his lone big-league season with the Philadelphia Phillies. Herzog, a backup outfielder/first baseman hit .257 while playing for several American League clubs.

But all are in the Hall as managers, having won six World Series among them — three by Anderson, two by Lasorda and one by Herzog.

“I’ve lost a great friend,” Herzog said. “But I’m sure Sparky is going to be glad to see him.”

If Cardinals do not add or discover boost for lagging offense, it could be splitsville for lineup

Sharing playing time at a few positions to maximize the matchups is one plan as spring training approaches.

Former Cardinal Rolen is skyrocketing in Hall of Fame esteem

Judging by the early Hall of Fame ballots that have been publicized, former Cardinals third baseman Scott Rolen must have had a terrific seaso…

Cusumano hosts show that got him to Channel 5; Cards broadcaster branches out because of baseball's iffy situation.

Aaron went one step (or two) too far one night in St. Louis

Or his career home run total would have been one higher.

Chairman DeWitt says offers have been made to both players but 'someone may come in and offer them more, and they may choose to take it.'

With Hicks back, depth tested, Cardinals' velocity and variety give veracity to being bullish on bullpen

Nearly 20 months after elbow surgery, 100-mph closer readies to bolster a strength the Cardinals recently have had — and need as much as ever.

Gorman, Liberatore could join the Cardinals at some point this season.

In the past week, the Cardinals' great has played for two different teams, including his older brother's, and even pitched an inning in a rout.

Chairman DeWitt says offers have been made to both players but 'someone may come in and offer them more, and they may choose to take it.'

During an online interview conducted as part of the Winter Warm-Up, team president Bill DeWitt III outlined limits on capacity and vaccine plans.

Tommy Lasorda, seen in 2018, was the fiery Hall of Fame manager who guided the Los Angeles Dodgers to two World Series titles and later became an ambassador for the sport he loved during his 71 years with the franchise. He died on Thursday, Jan. 7, 2021, of a heart attack at his home in Fullerton, California. (AP Photo/Damian Dovarganes)

Managers Tommy Lasorda of the Los Angeles Dodgers, left, and Whitey Herzog of the Cardinals meet before for the start of the 1985 National League Championship Series.