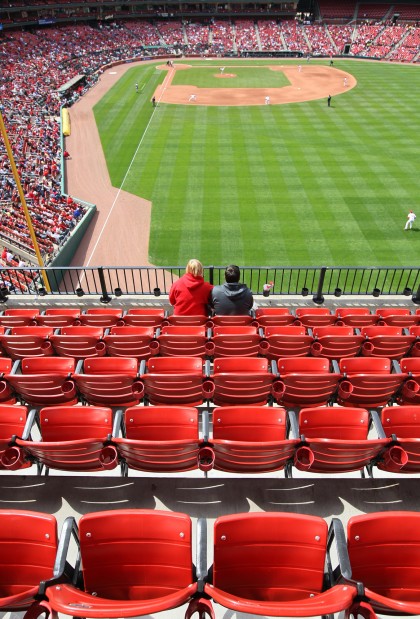 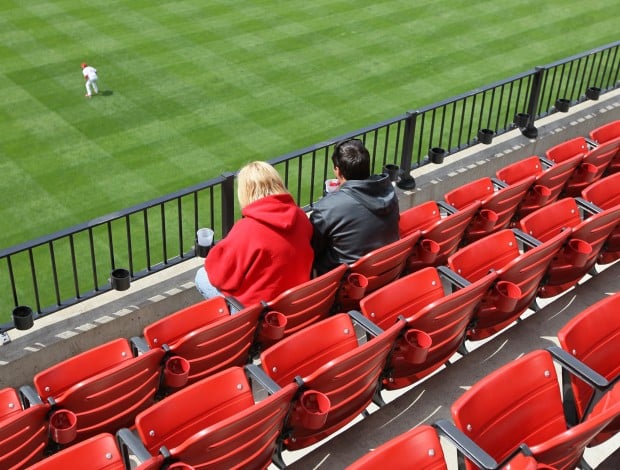 QUESTION: Sparse crowds at Busch Stadium so far this season could put the Cardinals on pace for the lowest-season attendance since the new stadium opened. Why do you think fans are staying away this year? It can’t all be blamed on the weather and opponents, can it? After all, they’ve had bad April weather and weak opponents before without seeing such small crowds. Do you think Cardinal Nation is, perhaps, just not as attracted to this team as those in recent years?

It’s probably not a good sign that, by the club’s own estimates, over 75 percent of single-game tickets are going for below face value via its new “ dynamic” pricing. The market has definitely softened. There seemed a tangible turnoff to the (lack of) Pujols negotiations. The fact the club has missed the playoffs three of the past four seasons also fed skepticism. The Cardinals will still reach 3 million attendance this season, so the issue is only relative. However, the club continues to realize less per ticket sold. One wonders if the trend accelerates should Pujols depart via free agency next winter.

Maybe a little early to judge. The March/April/May weather has been among the worst in many years – two days of tornadoes within a week – and there really has only been one attractive opponent in Cincinnati. The others – Washington, Pittsburgh, San Diego and Florida – traditionally are poorer draws.

Let’s see what happens when school is out and the more appealing clubs come in. A good barometer would be a week’s stand at the end of May and the first of June against San Francisco and Chicago.

This is a prety exciting baseball team. There is more offense than a year ago, more starting pitchers and some power arms livening up the bullpen. But . . . the tough economy has pounded on the fan base. The weather has been terrible. The ballpark experience is very expensive, despite bargain ticket pricing for lesser games. The Cards have a broad regional following and gas prices will cut into the out-of-towners coming in for the weekend. What we’re seeing is a natural market correction.

Some of the worst and most dangerous spring weather in the city’s history must be the chief culprit in the attendance decline. As the weather calms down and warms up, the attendance should rise.

I’m not sure what is causing the drop in attendance for the Cardinals but since so many teams in Major League Baseball are suffering through smaller crowds than we saw even last season, I’d say it’s not a St. Louis Cardinals problem.

The Cardinals are down approximately 3.5% according to the attendance stats posted on ESPN.com. But by comparison to other teams that’s really not a big deal. The Phillies, even with the best record in the NL and the anticipation built up for that amazing rotation, are down nearly 1%. The Yankees are in 1st place in the biggest market in the country and they’re down more than 6%. Colorado is off to a raging start and their attendances is off nearly 4%. Those are all teams that are off to great starts in good-sized markets and that’s not even the worst of it.

The Marlins are absolutely on fire and have one of the top records in all of Major League Baseball with their franchise best start of 18-9. Attendance in South Florida is down more than 8%. The Cubs are down more than 7% in one of the traditional “automatic” drawing venues, Wrigley Field. The Mets are down 7%. The Dodgers are down 12%. In Detroit the crowds are down 15%.

Since we saw a lot more empty seats than usual in several NFL markets as well, I’d saw this isn’t even a Major League Baseball problem. It’s an issue all sports will have to find a way to deal with for the time being, though teams who get the bulk of their local revenue from ticket sales certainly have the biggest challenge.

There are lots of theories about the attendance drops and we won’t know more about them until the end of the year when the full schedule has played out. Weather is blamed in some markets. The economy is certainly a wide ranging factor. Teams off to slower starts than usual, or teams perceived by fans to be stuck in a rut, have taken hits too. There is also the possibility that technology makes it more convenient (and economical) to just stay home.

It looks to me as if attendance is down all over baseball, as noted in this New York Times article. I think this has been a wetter, chillier April than many, and from behind the closed windows of the press box, I admire the bravery of those who have chosen to sit outside on many of these days and think to myself that if, given the choice, I wouldn’t sit in the stands for this one when I could be watching at home on TV. I really don’t know if Cards fans are disappointed that the team didn’t re-sign Pujols or make some other big offseason move, though the way Lance Berkman is playing, that was one very nice pickup. Just like how the team is playing, we’ll have to wait a little while longer before making broad pronouncements.

Cards hang tough but need Pujols to get hot soon

Burwell writes: Team's tough guys have been banging out hits, but Pujols' bat is sorely missed

What do you think is the main reason attendance is down at Busch this year?

Redbirds lose another series opener and drop below .500 at Busch Stadium.

Right fielder went 11 for 24 with two homers and eight runs batted in on a six-game trip to Houston and Atlanta last week.