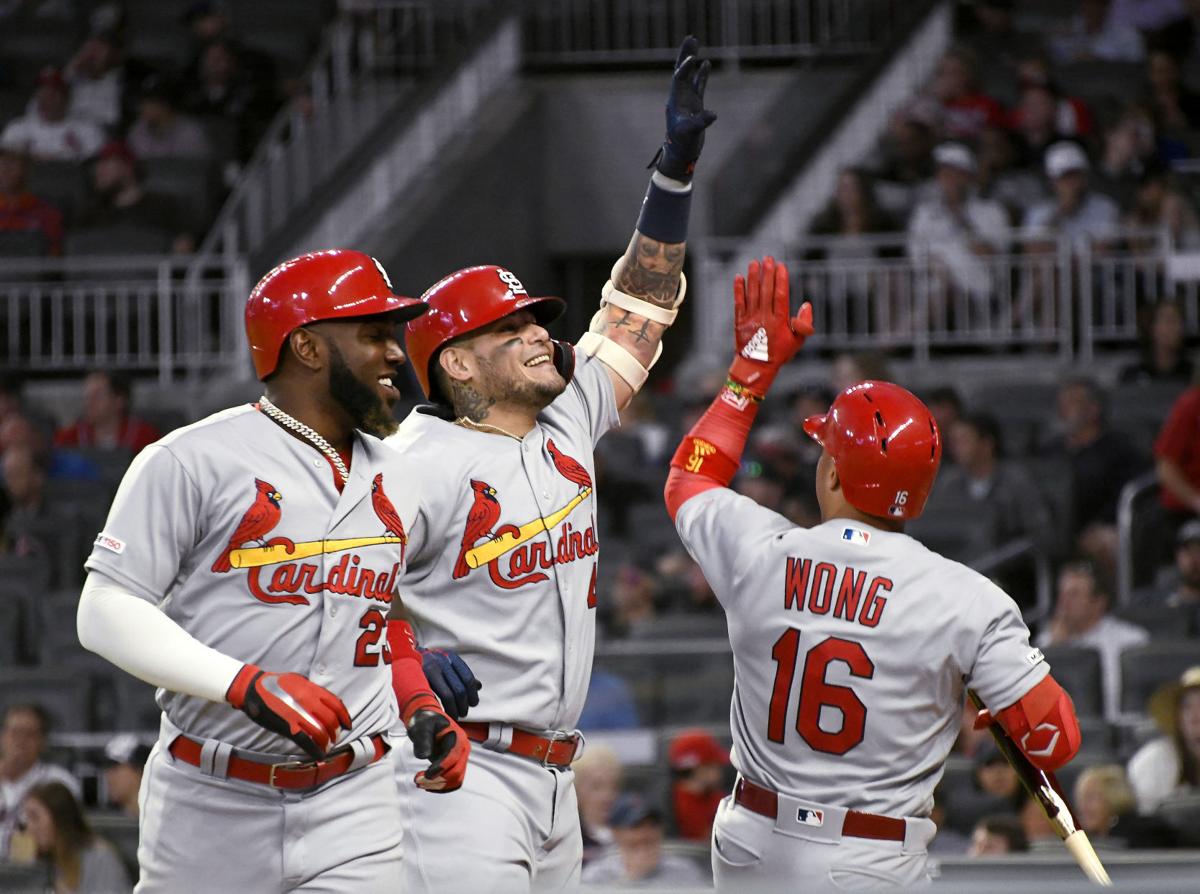 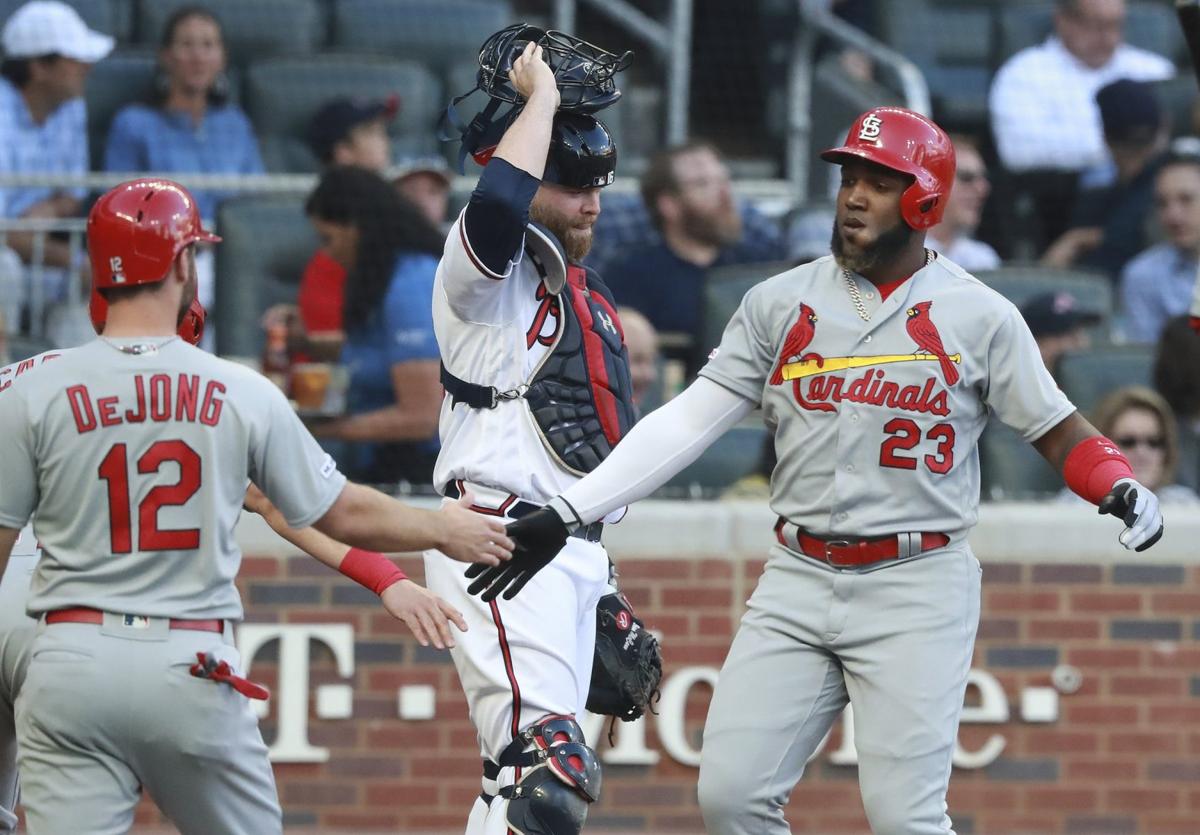 After leaving the righthander on the short end of the stick by not scoring in either of his previous two starts, the Cardinals assaulted Atlanta pitching for 11 runs in the first five innings. Home runs by Marcell Ozuna, Dexter Fowler and Yadier Molina accounted for seven of those runs and Flaherty drove in one himself before Kolten Wong added a third three-run homer in the ninth as the Cardinals delivered a 14-3 tomahawk chop to the Braves at SunTrust Field.

“You don’t get runs, you’re not going to win,” said Molina of Flaherty’s previous outings. Not that Flaherty needed all that much.

Flaherty, throwing his fastball as high as 96 mph, pitched no-hit ball for four innings before a succession of three soft hits by the Braves led to three runs in the fifth inning. He walked a season-high five and fanned six over six innings, throwing a total of 109 pitches, as he gained his fourth win.

But Atlanta righthander Mike Foltynewicz (0-3) now has given up 28 earned runs to the Cardinals in 27 innings, 27 of the runs coming in Atlanta as opposed to just one in two starts in St. Louis.

“That is pretty interesting,” said Cardinals manager Mike Shildt. “But that’s out of my grasp.”

Foltynewicz, who was on the injured list with a right elbow bone spur this spring, was tagged for eight runs, including three homers in the first five innings. Molina knocked Foltynewicz out of the game in the fifth with a three-run bomb, the 150th homer of his career, to deep center to highlight a six-run frame.

• STANDINGS: Cards 3½ back in NL Central

“Our offense was really, really good tonight,” said Flaherty. “It was fun to watch. We got three runs (in the first). And we didn’t stop going.”

Ozuna predicted, “I think we’re going to be good for the rest of the season.”

Before Tuesday, Ozuna had been four for 20 with nine strikeouts against Foltynewicz. But Ozuna inhaled a 2-1 hanging slider and exhaled it over the left-field wall and suddenly the Cardinals had a 3-0 lead.

“We saw him in the video and saw what he did to me,” said Ozuna, “and I think I got him pretty good today.”

Matt Carpenter walked and Paul DeJong had a bloop single before Ozuna cracked his 12th home run, running his runs batted in total to 37, ranking him fourth in the National League. It was Ozuna’s fifth three-run homer of the season.

Later in the inning, Molina doubled, tying him with Hall of Famer Rogers Hornsby for fifth on the Cardinals’ career list at 367. “It’s a great honor,” said Molina.

“I’m going to enjoy it for now, but tomorrow’s going to be another day and, hopefully, I can pass him.”

And Shildt said so is Yadier Molina.

“I always appreciate everybody that’s always looking for continual improvement,” said Shildt. “It’s a personal mantra of my own. I strive for it. I won’t say I always get it.

“You’re talking about a guy who’s been in the league since 2004 and who’s been to four World Series and won two. Nine Gold Gloves and he’s cemented himself as one of the best players in the game and rightfully made a good amount of money and there’s no satisfaction in anything that he does. He wants more. He’s hungry and loves the game. Great player.”

Molina has 30 RBIs (eighth in the NL) in 42 games, his best start in that department in his career and one behind Ted Simmons in 1975 for best RBI start by a Cardinals catcher.

Ozuna almost had two more RBIs in the third when he hit a ball even farther than he did in the first but it went just foul to left. “I think it was a home run,” Ozuna said. “I don’t know why they called that.”

Fowler’s second homer of the season came in the fourth and was his first in 86 at-bats in his hometown. “I didn’t know that,” said Fowler, who probably did know.

Wong’s homer gave the Cardinals three three-run homers in a game for the first time April 15, 2016 when Matt Holliday, Aledmys Diaz and Brandon Moss homered at Cincinnati, also in a 14-3 win.

Hall of Famer Earl Weaver, who managed Shildt’s favorite team, the Baltimore Orioles for a long time, always spoke of the joy of three-run homers, especially three of them. “You ain’t wrong,” said Shildt, smiling.

Flaherty’s six-inning stint marked the season-high fourth consecutive game in which the Cardinals’ starter had gone at least six innings and had allowed three or fewer earned runs. That is considered a “quality start” in the trade lingo, but Flaherty said, “It’s crazy if that’s considered a quality start.”

He was referring, in part, to the fact that he again gave up three or more runs in an inning, which has happened in eight of his past 11 starts over the last two seasons. The pattern in this one was similar to his previous start, a 5-0 loss to Philadelphia.

He pitched four no-hit innings, then walked the leadoff hitter in the fifth and the inning became a “crooked number” inning.

“A leadoff walk is never helpful,” Flaherty. “You want to make them earn it.”

Flaherty gave up four runs in the fifth in the Philadelphia game and three in the fifth on Tuesday night although the Braves hardly battered him.

“He had one ball struck hard,” said Shildt. “He pitched well.”

A $12.5-million team option must be exercised today or Wong will join teammates as a free agent. Molina is a free agent for the first time in his career.

Cardinals are bringing back Shildt's coaching staff, Maddux and Albert included, for 2021

Cardinals president of baseball operations John Mozeliak confirmed the return of the coaches.

A $12.5-million team option must be exercised today or Wong will join teammates as a free agent. Molina is a free agent for the first time in his career.

LA says team learned of positive test during the seventh inning, put infielder in isolation, but didn't feel compelled to stop him from joining on-field celebration. Friedman: 'Not good optics at all.'

If La Russa goes to White Sox, sidekick Duncan will not be along for the ride

“It’s too much moving around and dealing with people for me," former Cardinals pitching coach, now 75, says.

35 years ago: The day Don Denkinger robbed the Cardinals blind

35 years have passed since the infamously bad Don Denkinger call in Game 6 of the 1985 World Series between the Cardinals and Kansas City Royals.

Two years after his sudden release by the Cardinals in the midst of rehabbing from elbow surgery, Sherriff made his World Series debut with a scoreless inning for Rays.

Bring your Cards questions and comments to a live chat with Rick Hummel at 11 a.m.

Cardinals confirm commitment to current coaches, plan to bring them all back

Albert will continue to oversee hitters, who have struggled.