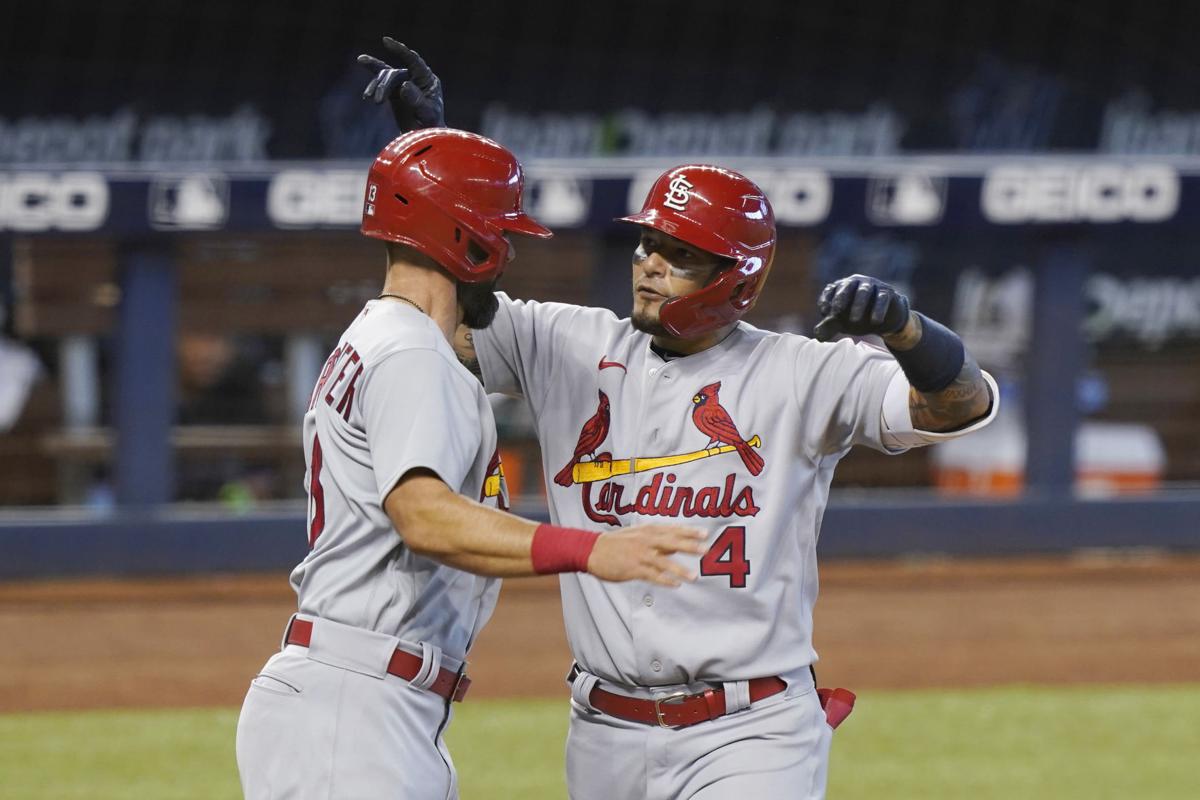 The Cardinals' Matt Carpenter (13) congratulates Yadier Molina after Molina hit a home run in the seventh inning of a game against the Marlins on Wednesday, April 7, 2021, in Miami. (AP Photo/Marta Lavandier) 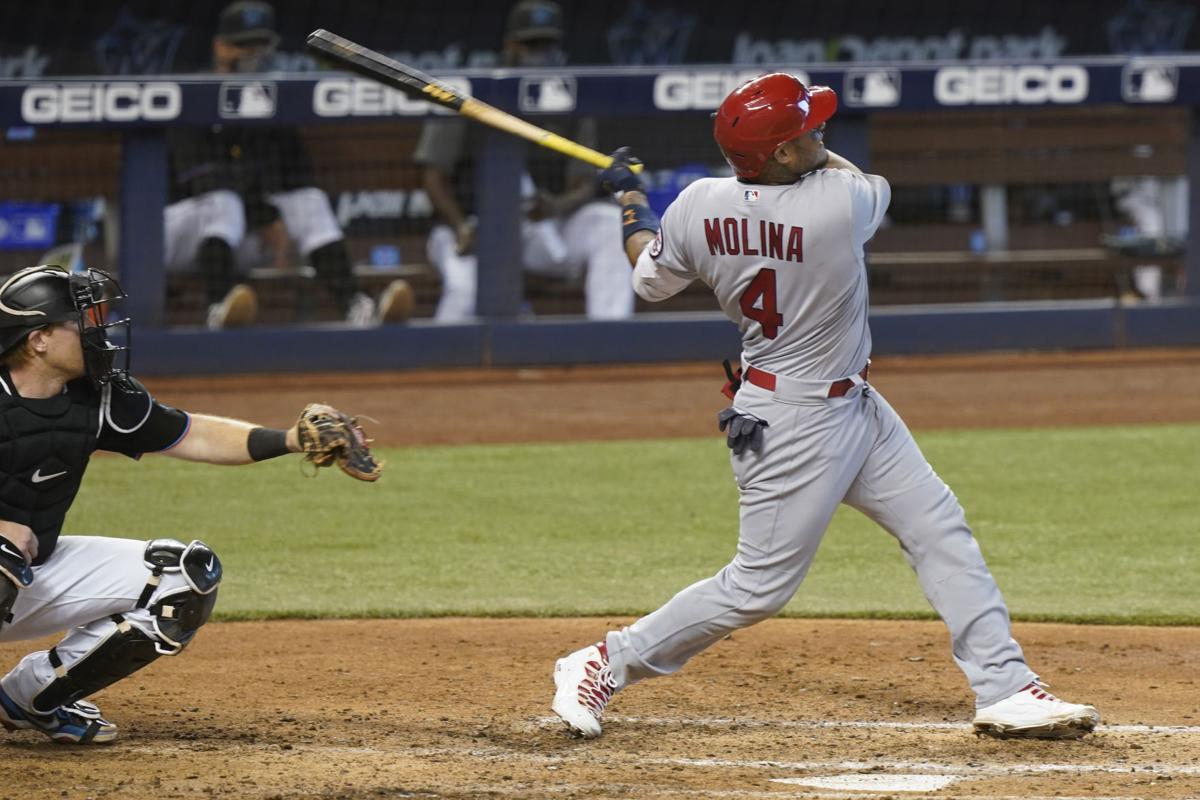 The Cardinals' Yadier Molina belts a home run in the seventh inning against the  Marlins on Wednesday, April 7, 2021, in Miami. (AP Photo/Marta Lavandier)

MIAMI — So the Cardinals finally had a starter endure past the fifth inning Wednesday. Staff ace Jack Flaherty gave up a leadoff hit to Miami’s Corey Dickerson, but no other safeties in six innings covering 101 pitches although he walked four.

Miami’s Pablo Lopez allowed only two hits — and also no runs — through 6 2/3 innings as the teams played a getaway game as if double-parked.

With two out in the seventh, though, Lopez walked hitless Matt Carpenter then Yadier Molina, who starred defensively all series, ripped a Lopez cutter over the left-field wall for his first homer of the season in the Cardinals’ 101st career game against the Marlins in Miami.

“(Molina) is our leader. He’s the guy we get behind,” Flaherty said. “That’s our horse.”

“Good players can beat you in a lot of different ways,” Cardinals manager Mike Shildt. “Clearly, Yadi’s one of them.”

Possessors of the best record of any visiting team here, the Cardinals now have won 65 of those 101 games. That includes a series-sweeping 7-0 victory Wednesday, credited to Flaherty, before a bipartisan gathering of 5,244. The Marlins had only three hits in the game.

Cardinals center fielder Dylan Carlson has had only three hits this season. But they all have been home runs, featuring a grand slam in the ninth that wrapped up business as usual for the Cardinals in Miami, wherever the stadium and whatever it is called (loanDepot Park now).

The sweep is the 10th the Cardinals have achieved against the Marlins since 1994. The first had come that year when current Cardinals bullpen coach Bryan Eversgerd, a reliever, made the only start of his career. That came after the scheduled starter, the recently deceased Rheal Cormier, hurt his back warming up. Eversgerd pitched five innings for the win.

Five innings was the most any of the Cardinals starters, Flaherty among them, had worked in the first five games this season. But, when he took his at-bat in the sixth inning of a scoreless game Thursday, that was the indicator that he would be headed out for the bottom of the inning, which he dispatched in 1-2-3 fashion.

Flaherty had 91 pitches at that point but assured his manager that he felt good enough to continue. Shildt, knowing that the righthander had an extra day of rest in his pocket, agreed.

The key play for Flaherty almost certainly came in the first. Flaherty, executing an inside move, caught Dickerson — one of two Miami runners at the time — leaning too far off second. The first out thus was recorded in what could have been a calamitous inning for him. He then was able to make a course correction.

“That was a big play right there,” Flaherty said. “Three-two count. Big pitch coming up. Luckily we caught him off.”

“That’s something we work on,” said Flaherty, who appeared to initiate the play.

“I don’t know if Yadi gave it to him or not,” Shildt said.

Flaherty finished with six strikeouts and retired 14 of the final 16 men he faced.

The bullpen took over in the form of Genesis Cabrera and Jordan Hicks. Cabrera handled the seventh and eighth innings and Hicks, whose sinker got to 103 mph, wasn’t bothered by a walk and a hit in the ninth. Right fielder Justin Williams preserved the shutout with a diving catch to end the game and left fielder Tyler O’Neill made a running catch toward the line for the previous out.

With the score at 3-0, Hicks had been set up for potentially his first save since 2019. That opportunity disappeared with Carlson’s blast. But because Hicks had warmed up anyway, Shildt deemed it more prudent to bring him into the game rather than to sit Hicks down. He responded by throwing some 11 pitches at 101 or harder.

Center fielder Carlson also excelled defensively Wednesday. He ran down Brian Anderson’s extra-base-hit bid to right center in the Miami fourth. Then Carlson tracked down Anderson’s drive to deep center before banging into the wall into the seventh, with Cabrera pitching.

“(Flaherty) made it easy for us to stay engaged in the game just the way he was going at hitters,” Carlson said.

Tommy Edman, who had two steals in two games, swiped second with two out after he had singled for the third time in the eighth. And Paul Goldschmidt delivered another blow to the Marlins with a run-scoring single to left.

Carlson, working his back from an 0-2 count, applied the knockout punch with his second ninth-inning homer in two nights. The switch-hitting rookie, who had some early troubles hitting with the bases loaded last season, has nine RBIs with his three hits.

Carlson said he had been receiving plenty of advice from veteran players such as Molina and Goldschmidt during a game, patting him on the back, “telling me to keep my head up,” and reminding him to take the game one pitch at a time.

“It’s really cool when you have guys like that behind you, pushing you and pulling for you,” Carlson said.

What a blast: Goldschmidt, Arenado & Carpenter homer in Cardinals 14-3 romp vs. Washington

Cardinals chase Strasburg from his start with a nine-run fifth inning. Flaherty allows one run in five innings for the win.

Phillies pounce on Martinez for six-run inning and breeze to 9-2 victory vs. Cardinals

That first at-bat would come in the second inning, the cherished first hit would come three innings after that, and a runner would dare to try…

When Gussie Busch bought the Cardinals in 1953, he asked, 'Where are our Negro ballplayers?'

The Cardinals search turned up first baseman Tom Alston, who broke into the team's lineup on April 13, 1954.

On a night of small ball, Nationals go bigger to beat Cardinals 5-2

Carlson shifts back to center, continues ascent in Cardinals lineup

The Cardinals' Matt Carpenter (13) congratulates Yadier Molina after Molina hit a home run in the seventh inning of a game against the Marlins on Wednesday, April 7, 2021, in Miami. (AP Photo/Marta Lavandier)

The Cardinals' Yadier Molina belts a home run in the seventh inning against the  Marlins on Wednesday, April 7, 2021, in Miami. (AP Photo/Marta Lavandier)