Meat Loaf, 'Bat Out of Hell' rock superstar, dies at 74 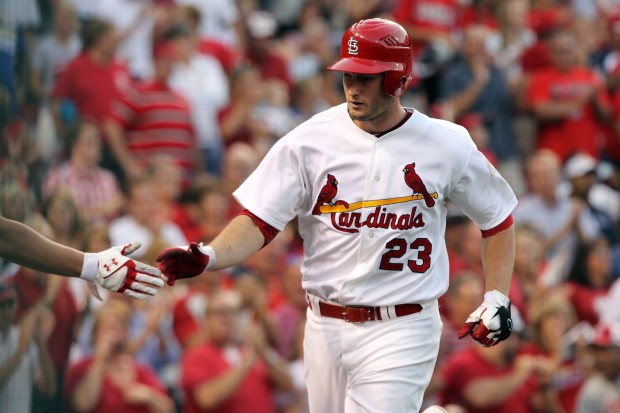 Cards' David Freese celebrates his homer in the third inning in a game between the St. Louis Cardinals and the Chicago White Sox at Busch Stadium in St. Louis on Thursday, June 14, 2012. Photo by Erik M. Lunsford, elunsford@post-dispatch.com 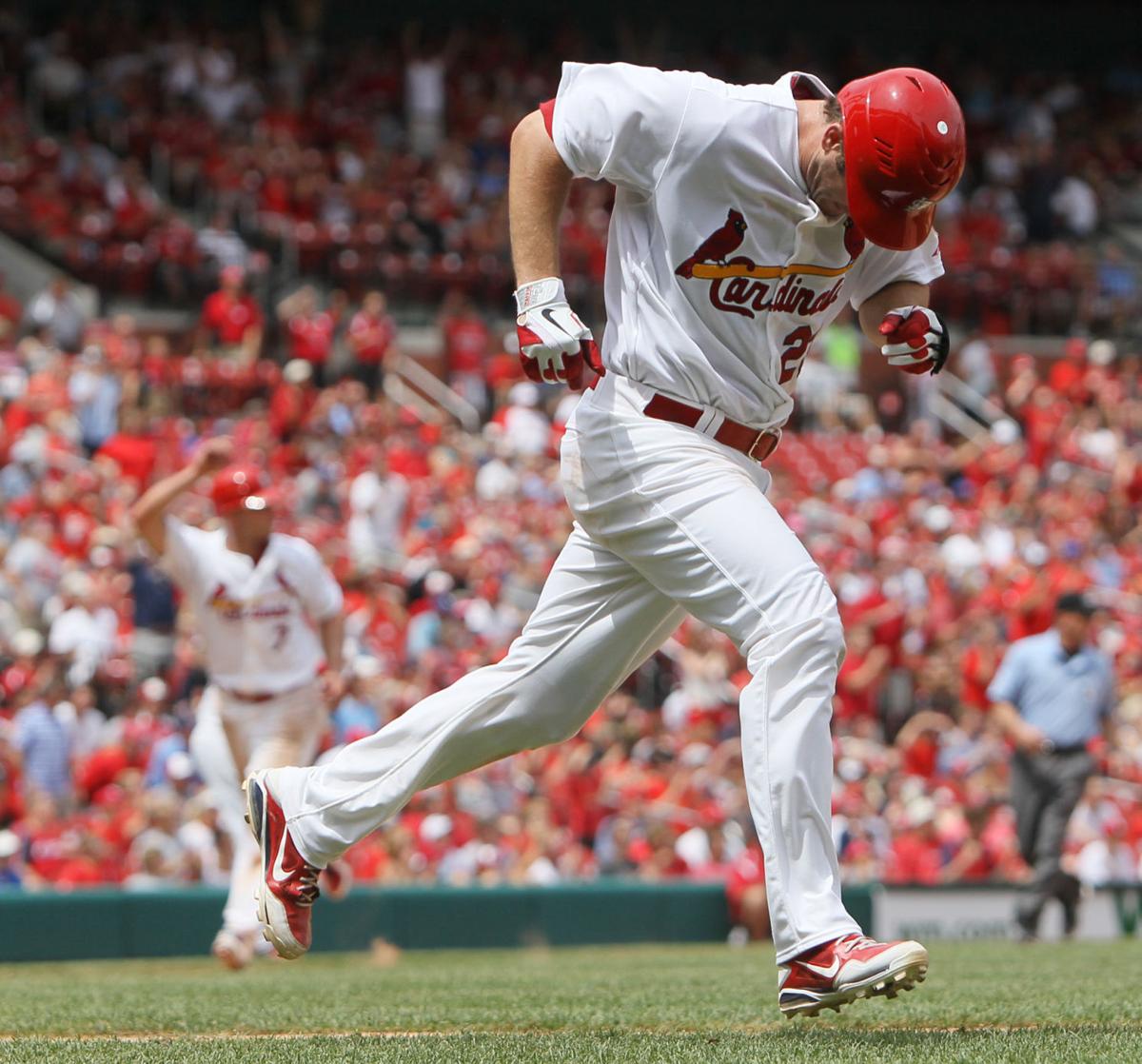 Cardinals' David Freese puts his head down as he runs to first with a two-run single in fifth inning action during a game between the St. Louis Cardinals and the Los Angeles Dodgers on Thursday, July 26, 2012, at Busch Stadium in St. Louis. Freese was tended to by a trainer for leg cramps during a break in the inning and was later pinch hit for in his next plate appearance. Photo by Chris Lee, clee@post-dispatch.com

DENVER • While he and his teammates blitzed the Chicago Cubs for a record-tying 12-run seventh inning 10 days ago, Cardinals third baseman David Freese quietly rewrote several of his own personal bests. His two-run double and two runs scored in the inning set his season totals at 55 RBIs, 43 runs scored and 17 doubles.

Told afterward that he had tied his career high for RBIs and eclipsed his highs in runs and doubles from any previous season, Freese nodded. With his eyes set on another personal record, he offered a simple explanation.

The statistics that many of Freese's coaches and peers have believed were inevitable if he could stay on the field have become actual because he has. With a start tonight as the Cards open a three-game series against Colorado, He will snap a few other career highs. He'll start his 88th game of the season at third base, pushing past the 87 games he started at third in 2011.

Soreness in his right calf kept him out of two games this past weekend, but that kind of nagging discomfort is far different from the fragile ankles and fractured hand that kept him from an everyday role in 2010 and 2011, respectively.

As the Cards head into the dog days of the season, Freese has been at his best. Within a couple of weeks he'll play his 100th game in a major-league season — a first in his career — and he arrives at the ballpark tonight with a 10-game hitting streak. During it, Freese has hit .563 with an .813 slugging percentage, six extra-base hits and seven RBIs. He extended it with two hits Sunday.

"After two years of injury, fighting that whole time to keep playing, this ... has re-energized me," he said. "I feel like I'm getting younger. I didn't play my age for two years. I played older than I was. Now, I'm playing at my age."

Cardinals hitting coach Mark McGwire said such production from the third-year big leaguer "is not a surprise to anybody in this clubhouse." But it's not as simple as merely getting at-bats. McGwire described how he and several veterans have talked with Freese about how to stay ready for those at-bats.

As Freese has sped toward his first 100th game, the challenge of staying productive on the field has been every bit as demanding as that of getting back on the field in past seasons.

"It's about learning how to pace yourself," McGwire said. "Getting the work that you need to get in and then get in the clubhouse and rest. When you're young you want to go out there and take 100 ground balls and swing the bat 100 times a day. The fact is, you can't do that 162 (times). You have to learn to get in your work and then get in there and get ready for the ballgame. It can be just as difficult staying sharp mentally. When you're playing every day you just learn how to do that."

Freese has been modifying his pregame routine. Part of playing his age has been maturing into a regimen that keeps his swing sharp and his body strong, without sapping him before the game. Manager Mike Matheny outlined how bench players and regulars have completely different warm-ups because of the demands on their position. Freese said he's had to embrace quality over quantity, especially when it comes to maintaining his swing.

This is the leading indicator for what he's learned: His hottest stretch of the season has come during the hottest temperatures of the season. Freese has a .476 average with 13 walks and only six strikeouts since the All-Star break. Unlike during a swoon earlier this season, he's striking the ball with authority to right field, the opposite field. His two-run double in the 12-run inning for his 54th and 55th RBIs of the season went to the right-field wall.

The rise in batting average — from .279 on July 1 to .316 today — has corresponded with more time in the field, too. Freese no longer is removed for a better fielder in the late innings. He has appeared in same amount of games at third this season as he did last season (88) but already has 822/3 more innings at the position.

"I think (Matheny) sees that I'm having fun, and that I'm determined," Freese said. "I think this year is a big year. I want to prove I can be a complete player."

Being available to play is how that starts.

"I knew when I got to game 100 and I figured if I'm in a lot of games and I can push toward 120, 130 then I was obviously doing something right," Matheny said. "I think there is a whole level of respect that goes to guys who go out there every day. And they're rewarded. If a guy wants to put up good numbers, you've got to be in there."

Freese's next game will be his 250th since coming to the majors to stay, and he has crammed a lot into a little time. He's been a World Series MVP, a National League championship series MVP, a record-setter when it comes to October production, and this year an All-Star. All of those are honors that define him. But there is one prefix he covets and finally has a hold on.

Cincy rolls on, but could be without Phillips

Cardinals third baseman David Freese is closing in on breaking the 100 games-played barrier for the first time in his career. He has been inju…

Garcia begins the road back

Scouting report: The Rockies (37-63), who are plummeting toward the worst record in franchise history, have lost three of four to the Cardinal…

If the Cardinals can't rebound to make the playoffs, blame all the close-game losses.

Cards' David Freese celebrates his homer in the third inning in a game between the St. Louis Cardinals and the Chicago White Sox at Busch Stadium in St. Louis on Thursday, June 14, 2012. Photo by Erik M. Lunsford, elunsford@post-dispatch.com

Cardinals' David Freese puts his head down as he runs to first with a two-run single in fifth inning action during a game between the St. Louis Cardinals and the Los Angeles Dodgers on Thursday, July 26, 2012, at Busch Stadium in St. Louis. Freese was tended to by a trainer for leg cramps during a break in the inning and was later pinch hit for in his next plate appearance. Photo by Chris Lee, clee@post-dispatch.com