Full speed ahead: Hicks starts bid to reclaim Cardinals closer role with swift inning 21 months in the making
0 comments
Share this
{{featured_button_text}}
1 of 2 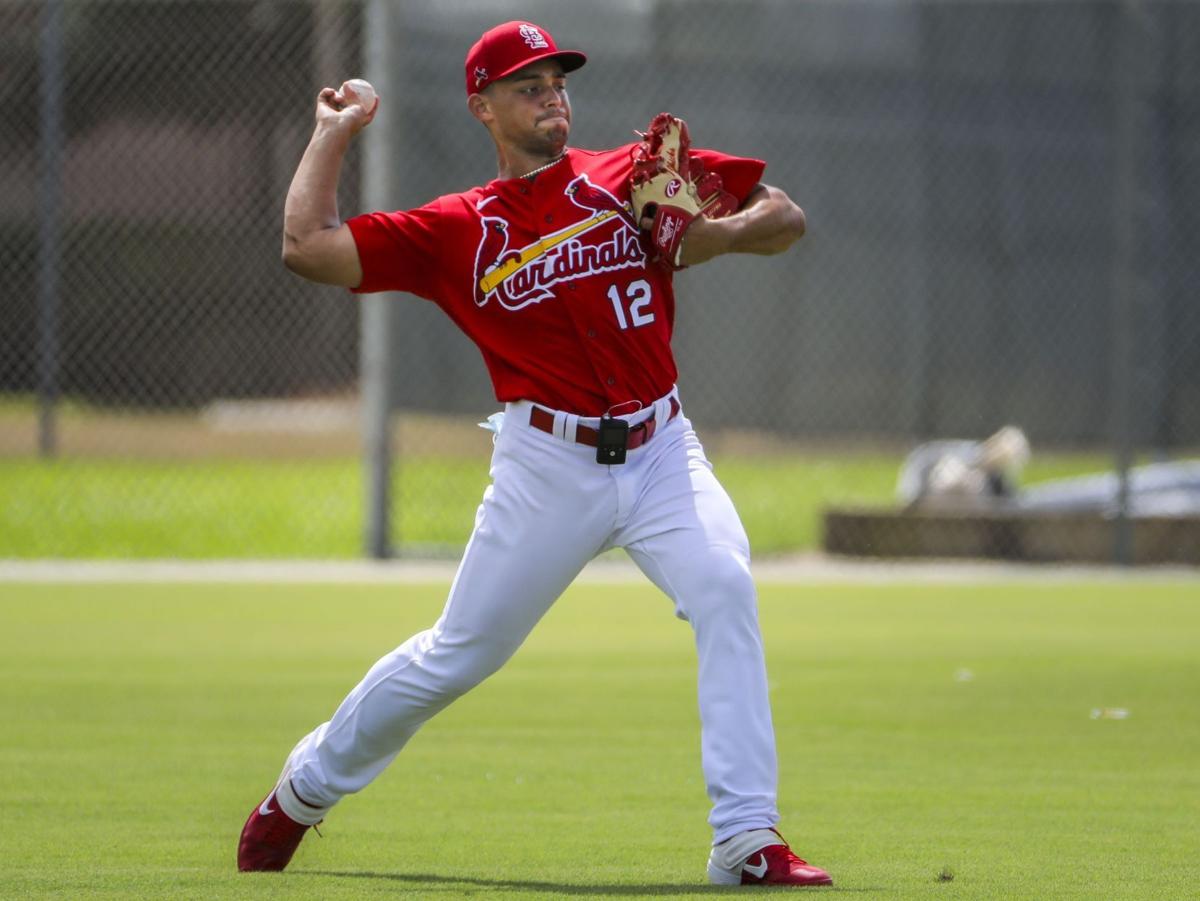 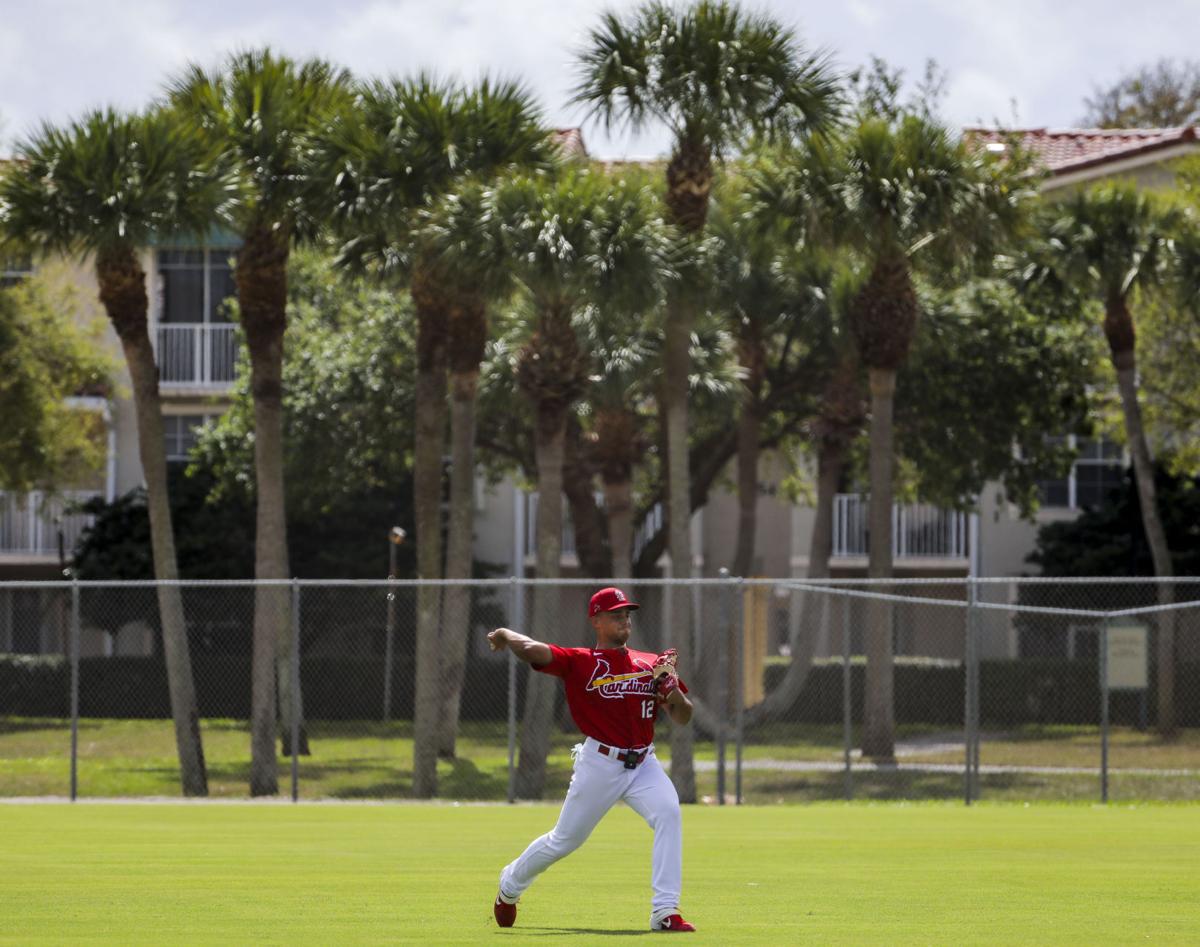 Cardinals relief pitcher Jordan Hicks (12) warms up during Cardinals spring training at the Roger Dean Stadium complex in Jupiter, Fla., on Monday, March 1, 2021. The Cardinals have a rest day following their first game on Sunday, their next game is on Tuesday against the Marlins. (Colter Peterson, cpeterson@post-dispatch.com)

WEST PALM BEACH, Fla. — It had been two birthdays, two Christmases, and almost 21 months since Jordan Hicks tugged on cleats and tested his fastball against a hitter from another team. The plan going into this first game appearance since elbow surgery was to assert his sinker, the elite sizzler that had the highest average velocity in the majors when last Hicks was healthy enough to throw it.

That passed, and fast.

Hicks pitched a perfect inning in a B-game at Washington’s spring facility, needing 11 pitches to retire three batters without a ball leaving the infield. All 11 pitches were fastballs, most at 100 mph or swifter and several with plunging movement. This was his opening statement to reclaim his role as closer.

“He wanted to give his fastball a chance to see where he is,” pitching coach Mike Maddux said. “He pounded the strike zone. He got ahead. He established the fastball. And he challenged hitters. The eye test tells me had plenty on it. He just threw it past them. A first step.”

If Hicks recovers well Thursday, he’ll be scheduled to appear in a Grapefruit League game within the week. The righthander had not appeared in a game since June 2019, and his time since has been spent recovering from Tommy John surgery. The Cardinals acknowledge they have been “slow playing” Hicks’ schedule so far this spring — but that is about to speed up.

The club expects Hicks to be ready for the opening day roster, and manager Mike Shildt did not dismiss the idea that Hicks could start the year in the same role he left — finishing games.

“I wouldn’t say it’s impossible,” Shildt said. “I can’t declare that at the moment. The good news is we have a lot of options, and he’s definitely one of them.”

When last he pitched for the Cardinals, Hicks was working on what would have been his 15th save of the season on June 22, 2019. Earlier in the game Albert Pujols, in his first visit with the Angels, brought a sellout crowd at Busch Stadium to its feet with a home run. On a 99.8-mph sinker, Hicks retired Pujols on a groundout for the first out of the ninth inning. Hicks’ last pitch was an 81.8-mph slider that struck out the batter but brought concern racing from the dugout. His right elbow had come undone. It wasn’t until Wednesday morning in the fifth inning of a game on a back field without fans that he next threw a pitch in a competitive crucible.

That first pitch was a fastball taken for a strike. Hicks struck out the first batter with a fastball that popped the mitt before the batter’s wrists brought the bat barrel around. The next two batters fell behind in the count, one didn’t chase a sinker near the dirt, and then both grounded out. Eight of his 11 fastballs were strikes, and with each one the economy of his mechanics stood out. He was touching around 102 mph with apparent ease.

Hicks was unavailable for comment as he headed back to the Cardinals’ complex for standard treatment to begin his recovery. A teammate said enough.

“He’s gifted, man. He’s gifted,” said Jack Flaherty after his start Wednesday in the main-field game against Washington. “For the ball to come out the way it comes out — it’s a rarity. There are very few guys who throw the ball the way he does. His mechanics are very sound and stable and smooth. It’s fun to watch him get on the mound and peek up at the radar gun when he kind of lets one go and he’s not even trying. You look up and it’s 100-plus. You ask him and he didn’t really let it go yet.

“You’ve got to sit back in awe sometimes.”

With 20 months of recovery and workouts, including opting out of 2020’s pandemic-shortened season, Hicks has made noticeable changes. At 24, he’s two years older, and has added some physicality to his frame as he’s matured. He’s streamlined his mechanics and clearly drilled on them to the point of muscle memory. Their simplicity has been on display during bullpen sessions and lauded by teammates. His hands start higher, have less distance to travel, and seem to do it elegantly.

“It’s really a testament to his dedication, the rehab he did, to the people he had helping him,” Maddux said. “Muscle memory is really delivery checkpoints. That’s a mental thing as well as a physical thing. He doesn’t have to come out there and force it because for him the velocity — it’s there without the effort. Less effort, better stuff.”

The decision this week to shift Alex Reyes to the bullpen for 2021 and the imminent return of Hicks as a late-inning showstopper gives the Cardinals a fiendish collection of velocity. This past year, as he became the team’s closer, Reyes averaged 97.6 mph on his fastball. That ranked 12th among relievers. At 23rd was teammate Ryan Helsley (96.9 mph), and lefty Genesis Cabrera cracked the top 50, at 96.2 mph. Hicks is the only pitcher since 2018 to average faster than 100 mph on his fastball. He averaged 101.2 mph in 2019 before his injury.

Toss in Hicks’ average to last year’s rankings and only the Padres and Cardinals would have three relievers in the top 25 for average velocity.

“Oh gosh, man, it’s like the analogy is on the offensive side,” Shildt said. “You add a big bat on the lineup (and it) makes everything around him better. You’re talking about a big piece that you can count on, has experience in higher level situations, clearly has his stuff. Just allows more depth to what we’re doing. It creates more roles for different people. That depth is huge. It’s a big, big piece of what we’re doing getting Jordan back.”

At each stage of his throwing program, after each significant step this spring, the Cardinals have preached the importance of how he recovers the next day, how the rebuilt elbow responds to game use and strikes of adrenaline like Wednesday’s. Maddux said with Hicks “we’re in it for the long haul, thinking always about his long-term health.” About the only thing slow about Hicks’ career has been his schedule the past 20 months, and that’s picking up pace. When asked if the strength, the mechanics, the health might mean Hicks will have a few more mph coming off his fingertips, Shildt said he “cannot rule it out.”

They can, however, imagine how Hicks at full speed changes their bullpen.

“It’s going to mean a lot of trouble for everybody else,” Flaherty said.

Team intends to 'honor the off days,' says pitching coach Mike Maddux, and that will mean opening with a five-man rotation, and a fifth spot still up for grabs.

A scan taken of the righthander's shoulder did not show any structural 'abnormalities,' an official says. Other exams are required before Mikolas resumes throwing.

Goold: From Munoz bolting to camps closing, eight days in Jupiter as baseball came to a stop

A year ago, operations ceased while a Cardinals game continued. That was one moment in a series of events that offer a snapshot of COVID-19's arrival.

Flaherty finishes five with a flourish against teammates; Gorman gets game-action at second base

Kim will continue making progress with a longer, more intense throw Tuesday, and Mikolas has been cleared to begin some activity.

Hicks speeds through scoreless inning vs. Nationals in first game appearance since June 2019

WEST PALM BEACH, Fla. — With a vantage point two stories up and a few blocks away, it was still possible to see the sizzle on Jordan Hicks' fa…

Strike zones, toughest interviews and more tales from our baseball writers with Virtual Baseball on Tap

Watch the replay of our Baseball on Tap event and hear from Derrick Goold, Rick Hummel, Ben Frederickson, Benjamin Hochman and Jeff Gordon.

The Cardinals had hoped Wednesday would be a day of 'benchmarks' with Hicks' first game appearance, Bader's return to the lineup, and Mikolas' throwing session. Two of the three are still planned.

Cardinals Mikolas heads for more exams on sore shoulder, will not be ready for start of season

Mikolas will undergo a series of exams Wednesday to explore reasons why soreness has seized on his right shoulder and not relented.

After another rocky first inning, Cardinals' Kim finds groove by picking up the pace

For the fifth time in seven exhibition games, the Cardinals' starter failed to finish the first inning. But he finished strong.

Cardinals relief pitcher Jordan Hicks (12) warms up during Cardinals spring training at the Roger Dean Stadium complex in Jupiter, Fla., on Monday, March 1, 2021. The Cardinals have a rest day following their first game on Sunday, their next game is on Tuesday against the Marlins. (Colter Peterson, cpeterson@post-dispatch.com)