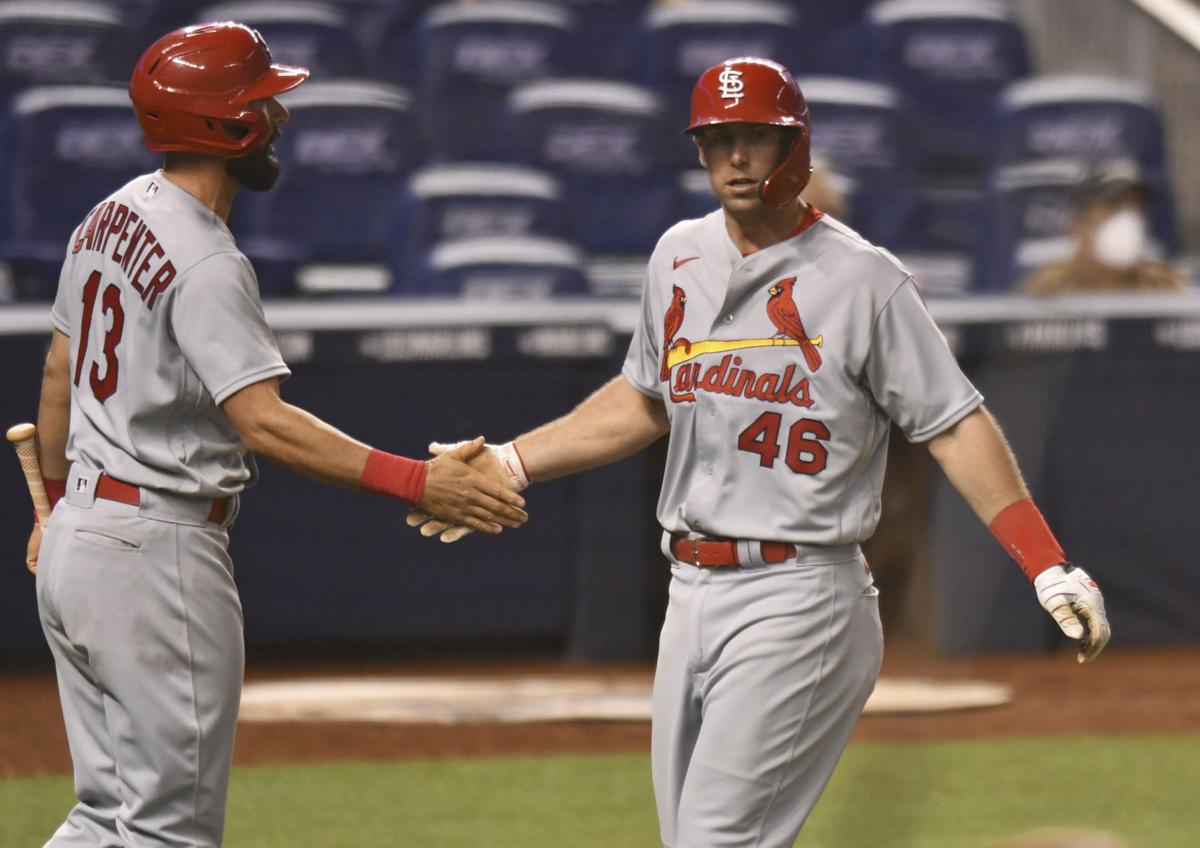 St. Louis Cardinals' Paul Goldschmidt (46) is congratulated by Matt Carpenter (13) after Goldschmidt scored during the sixth inning of a baseball game against the Miami Marlins, Tuesday, April 6, 2021, in Miami. (AP Photo/Jim Rassol) 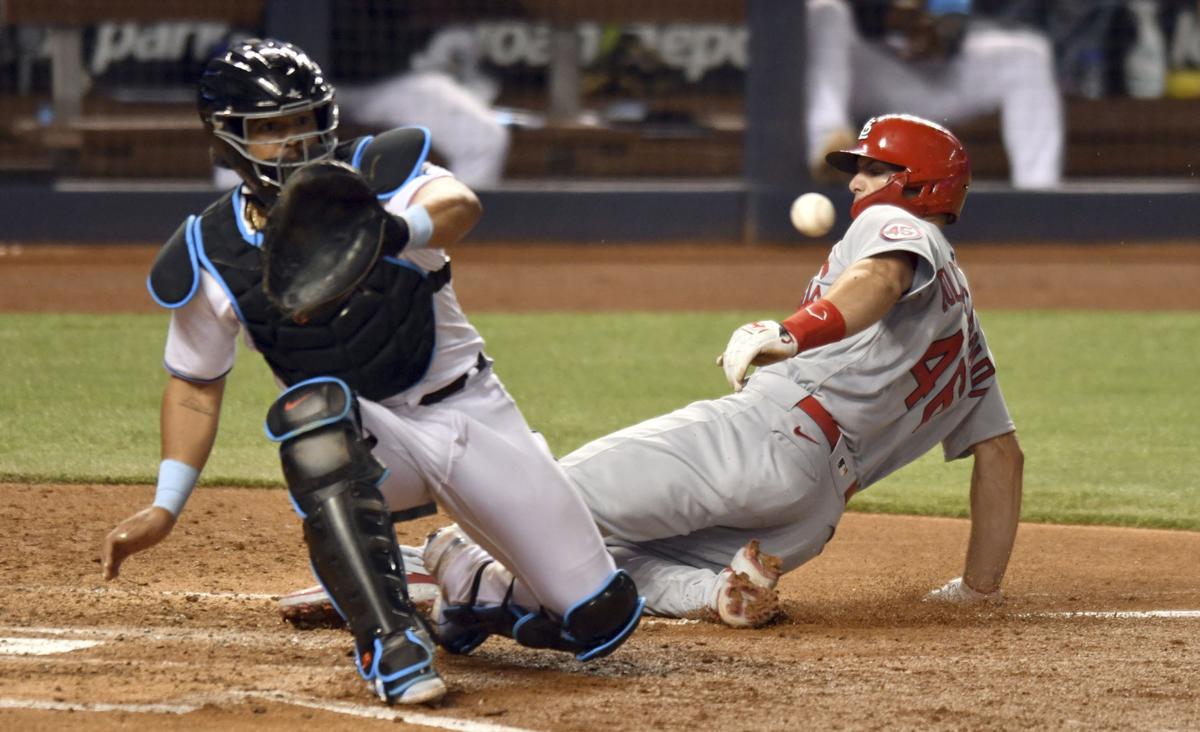 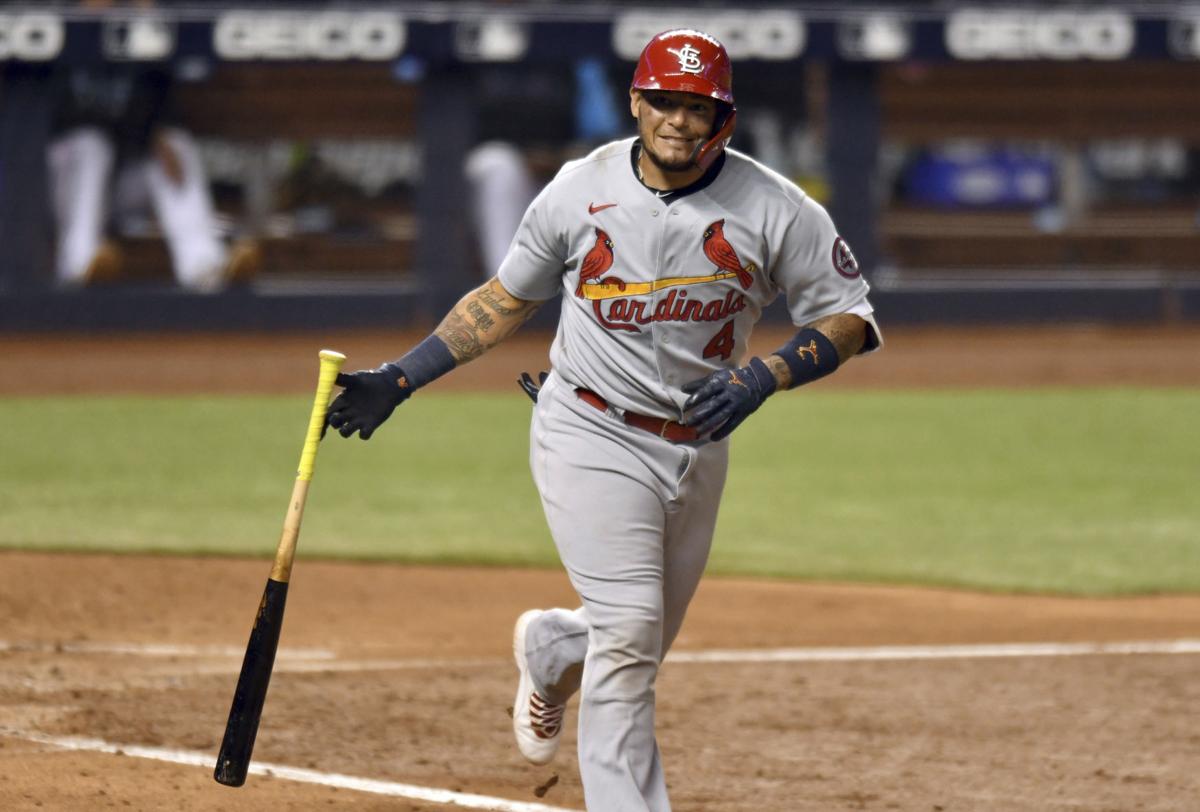 St. Louis Cardinals' Yadier Molina drops his bat after hitting a sacrifice fly during the sixth inning of the team's baseball game against the Miami Marlins, Tuesday, April 6, 2021, in Miami. (AP Photo/Jim Rassol)

MIAMI — The Cardinals surely must have sensed they would see a night like this, when prized righthander Sandy Alcantara would haunt them. But that was part of the price of doing business with the Miami Marlins in order to acquire slugging outfielder Marcell Ozuna before the 2018 season.

Ozuna is long gone now but Alcantara was very much center stage for five innings Tuesday night, tying his career high with 10 strikeouts. “Alcantara’s one of the better ones we’ve seen in a long time,” said Cardinals third baseman Nolan Arenado. “He didn’t give us a whole lot of chances to do anything.”

The Cardinals, however, felt fortunate they weren’t farther behind than 2-0 because the Marlins had 12 base runners in their first five innings.

But there was some resourceful pitching by John Gant, who had to pitch around traffic all night in his four-inning stint. And then the Cardinals, without getting a hit out of the infield, broke through with three runs in the sixth and held on for a 4-2 victory as their bullpen knocked off five innings after throwing four scoreless frames the previous night.

The biggest part of the sixth-inning surge was some spot-on base running by Tommy Edman, Paul Goldschmidt and also Arenado, who were on bases 3, 2 and 1 after two infield hits and a walk to start the inning.

Edman scooted home when he saw a pitch elude catcher Jorge Alfaro and skitter up the first-base line. “Boom, (Edman) gets a good jump, scores and Goldy gets over,” said manager Mike Shildt.

With Goldschmidt at third and Arenado now at second, Paul DeJong bounced to third baseman Brian Anderson, who fielded the ball to his left, looked at Goldschmidt, who had slowed about 25 feet down the line. Once Anderson cocked his arm to throw to first, Goldschmidt set sail for the plate, sliding in safely with Arenado alertly going to third as first baseman Garrett Cooper’s throw dribbled away from Alfaro.

“Fantastic baseball play,” said Shildt, referring to Goldschmidt’s decision-making. “And Nolan’s a good baseball player. He has good instincts on how to play the game.”

When the count went to 3-0 on Matt Carpenter, Marlins manager Don Mattingly waved for the fourth ball to be intentional to set up a double play with Yadier Molina at the plate. But Molina, who also drew high marks from his manager for his handling of the many situations the Cardinals’ staff encountered, cracked a sacrifice fly to center giving the Cardinals the lead, which their crack bullpen protected to the finish. Dylan Carlson ended a nothing-for-13 dive by hitting his second home run in the ninth inning.

Thirteen also was a key number for the Marlins, who were one for 13 with men in scoring position.

Gold Glove left fielder Tyler O’Neill committed two errors on the same play in the first inning when four of six Marlins reached base but just one scored.

After Corey Dickerson lined a single to left off Gant, Starling Marte sent a knuckleball to left which went off the glove of the retreating O’Neill. That was error No. 1.

Then O’Neill recovered the ball and fired to third to try to cut down Dickerson, who had hesitated between first and second to see the fate of the ball Marte hit. But O’Neill’s throw short-hopped past third baseman Arenado, who said he should have blocked it.

Gant was backing up home instead of third and Dickerson, who had slid into third, got up and dashed home with the game’s first run.

Cooper walked but Gant got a double play on an Adam Duvall grounder to Arenado, who said, “I’ve noticed that about these (pitchers). They don’t let a whole lot get to them.”

O’Neill was involved in another strange play in the second. He fouled a ball straight back and shattered the lens of a Marlins camera positioned over the backstop behind the home-plate area. Home plate umpire Jerry Layne ordered the glass to be swept up that had splattered onto the field. O’Neill then became Alcantara’s third strikeout victim.

Shildt said he wasn’t sure what the camera’s purpose was. “Another ball hit it yesterday,” said Shildt, who said the ball was ruled out of play. “(O’Neill) did his part to make it permanently out of play. Never seen it. That’s what’s great about our game. Every time you go to the ball park, you’ve got a chance to seeing something you’ve never seen before.”

But while Alcantara was mowing down the Cardinals, Gant was dodging nearly everything hurled at him. Gant worked out of a bases-loaded, no-out spot in the third by fanning Duvall on a changeup, getting Anderson on an infield fly to DeJong and striking out Jazz Chisholm Jr., on a 91 mph sinker.

“I didn’t have the stuff I wanted. I got us into jams but I was able to battle out of it — blue-collar style,” said Gant.

Gant had nine base runners in his four innings. “That’s not how you draw it up,” he said.

“I’ve got to do a better job of getting deeper in that game and saving some bullets for those (relievers). They used a lot tonight.

“But we’ve got the personnel down there for it.”

Shildt praised Gant, saying, “Fantastic job. Dodging bullets, making pitches. But our catcher caught as good a game as I’ve almost ever seen. And that’s saying a whole lot. He was just amazing. You’re talking about the traffic that was out there all night.”

After his misplays earlier, O’Neill kept the score at 2-0 in the fifth with a tumbling catch in left field off Chisholm Jr. That play may have swung the momentum the Cardinals’ way.

“That’s a huge play,” said Shildt. “If that ball gets by him, it’s a huge game-changer.”

Giovanny Gallegos, who worked two innings on Monday, was brilliant in the seventh, forcing called third strikes on the 3-4-5 hitters in the Miami lineup, Cooper, Duvall and Anderson. It was the first time in Gallegos’ career that he had pitched two days in succession after throwing at least 25 pitches (26 in this case) in the first game.

Tyler Webb and Alex Reyes pitched around a leadoff double by Chisholm Jr. off Webb in the eighth. Reyes walked pinch hitter Jesus Aguilar with two out to give the Marlins two runners but center fielder Carlson ran down Dickerson’s liner in the gap. The save was Reyes’ second in two nights.

Nolan Arenado is the new 3rd baseman for the Cardinals

St. Louis Cardinals' Paul Goldschmidt (46) is congratulated by Matt Carpenter (13) after Goldschmidt scored during the sixth inning of a baseball game against the Miami Marlins, Tuesday, April 6, 2021, in Miami. (AP Photo/Jim Rassol)

St. Louis Cardinals' Yadier Molina drops his bat after hitting a sacrifice fly during the sixth inning of the team's baseball game against the Miami Marlins, Tuesday, April 6, 2021, in Miami. (AP Photo/Jim Rassol)