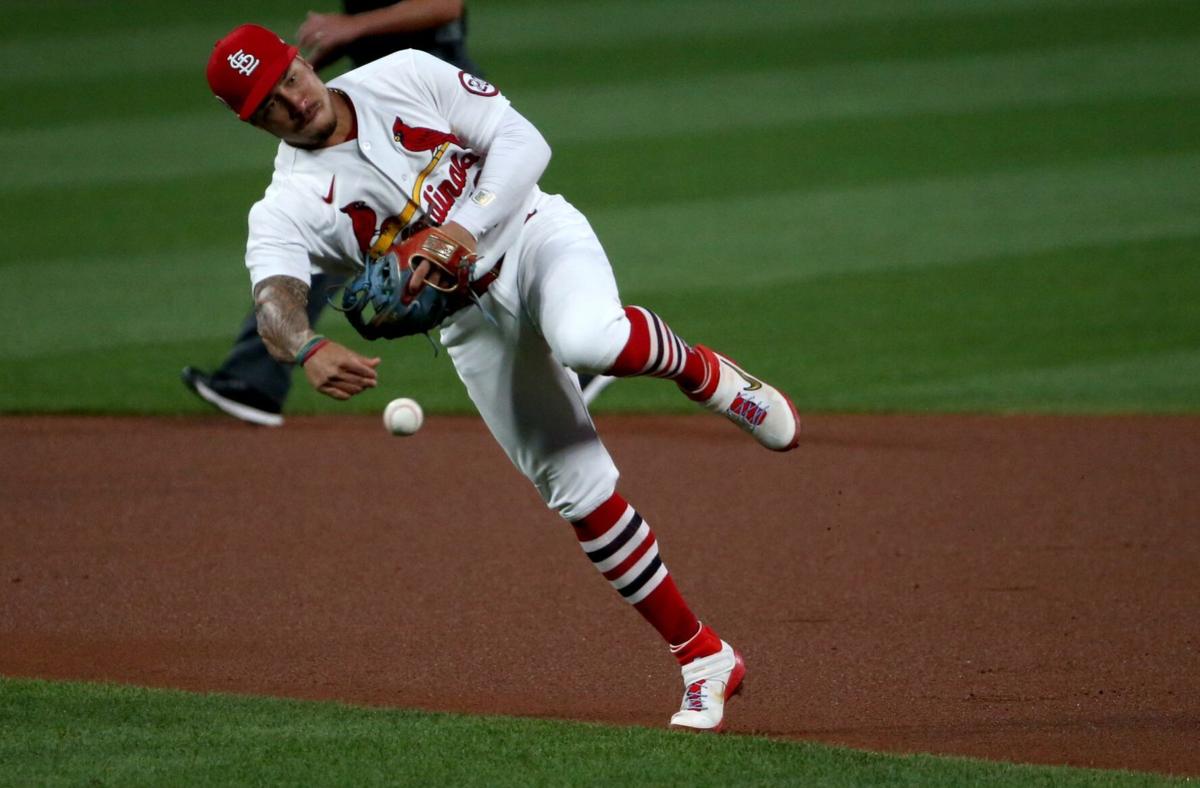 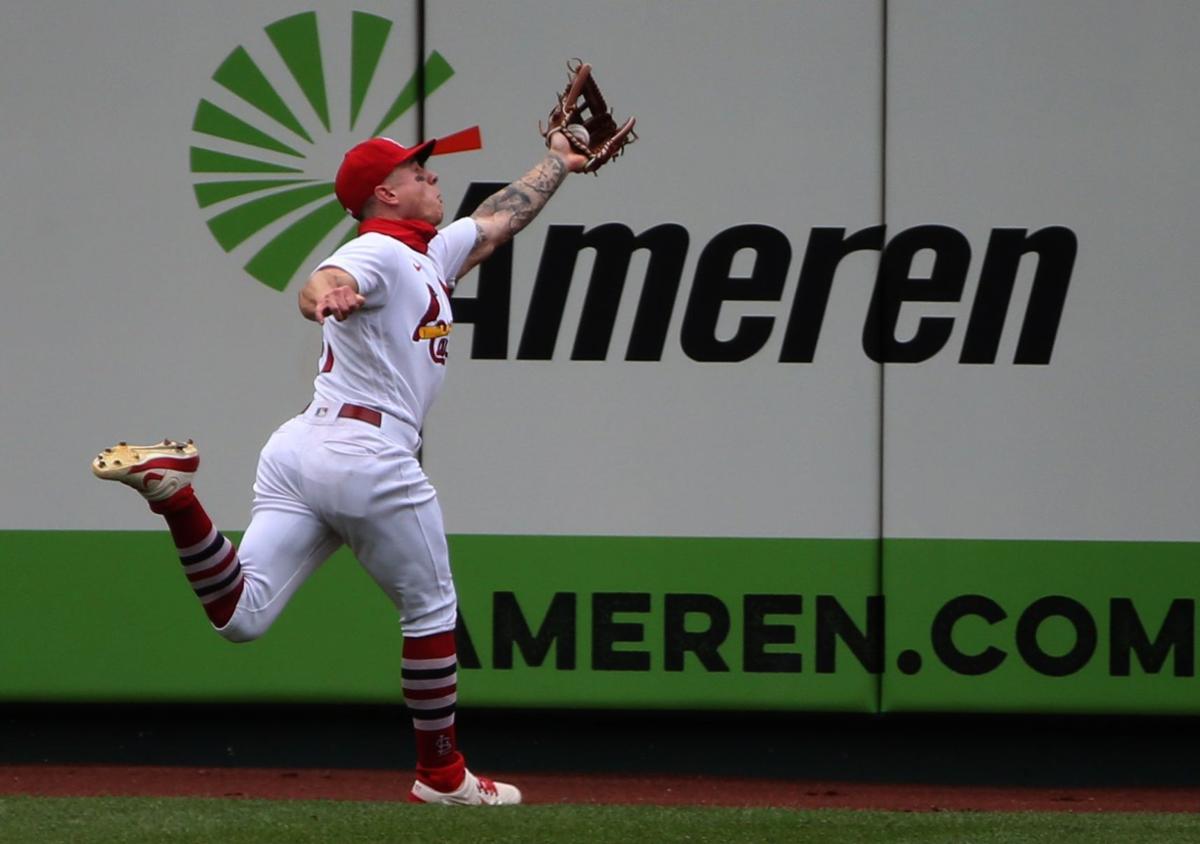 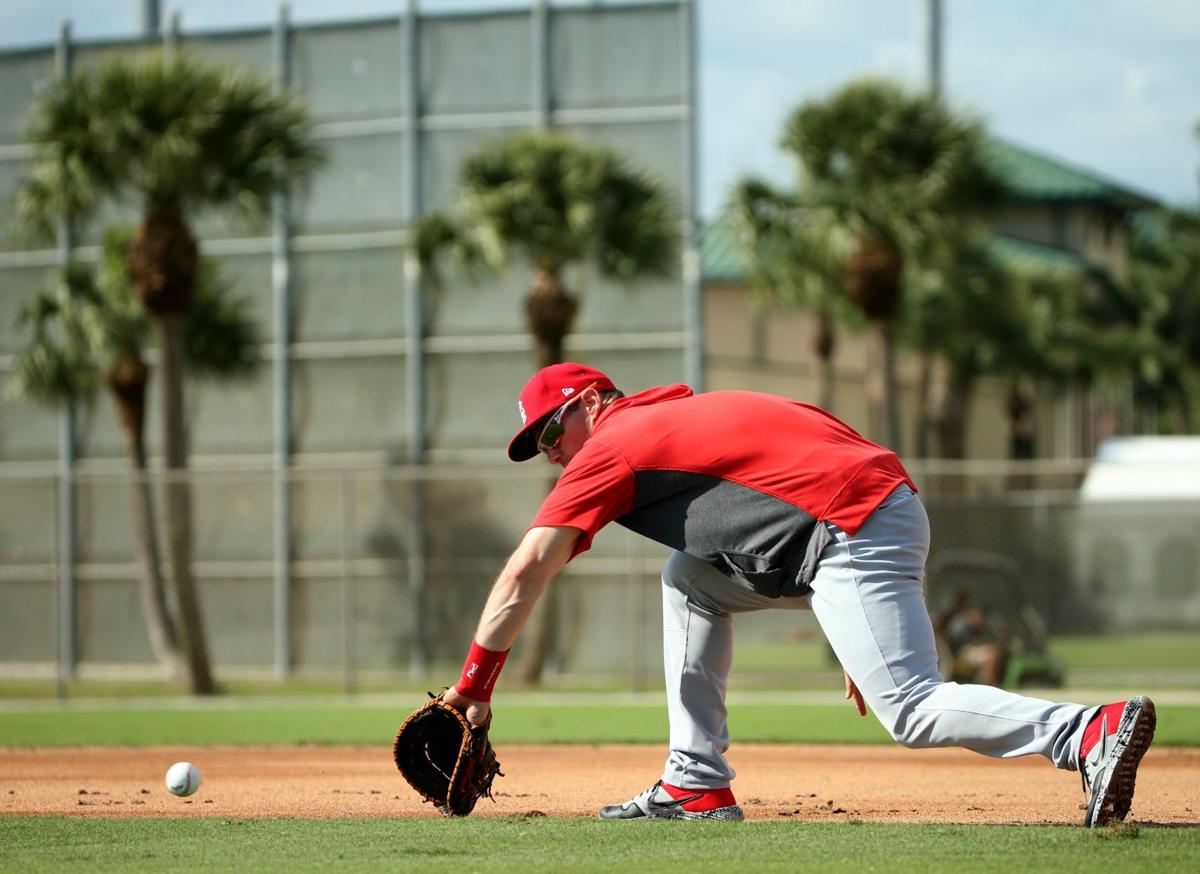 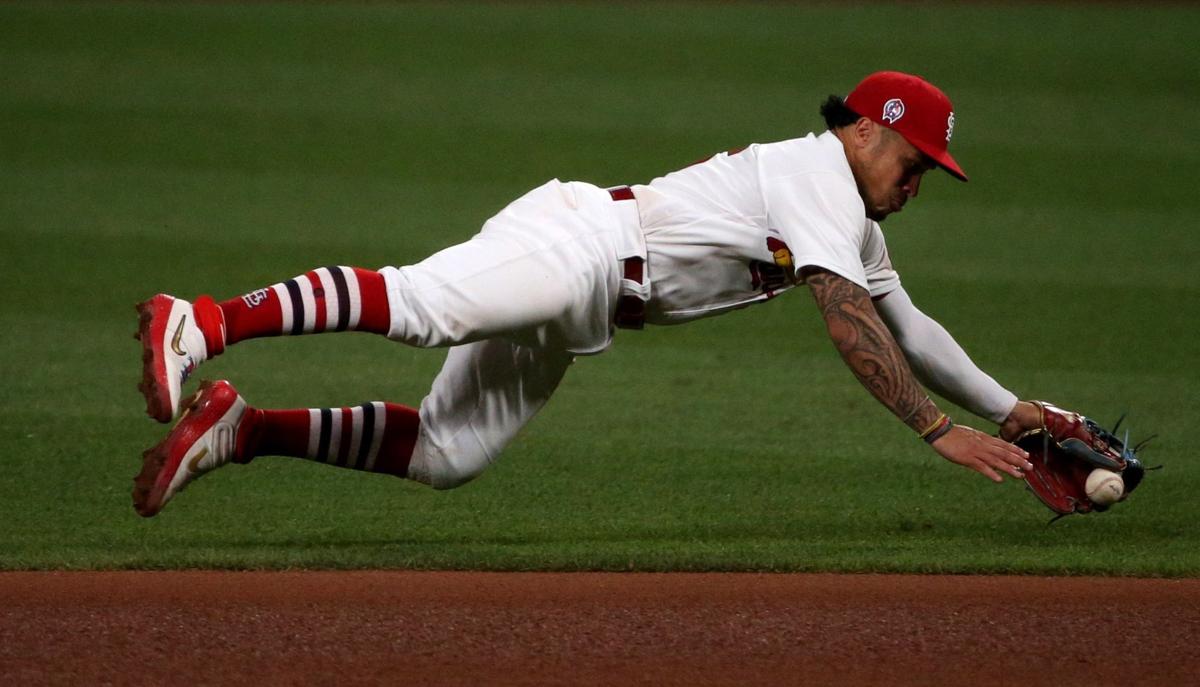 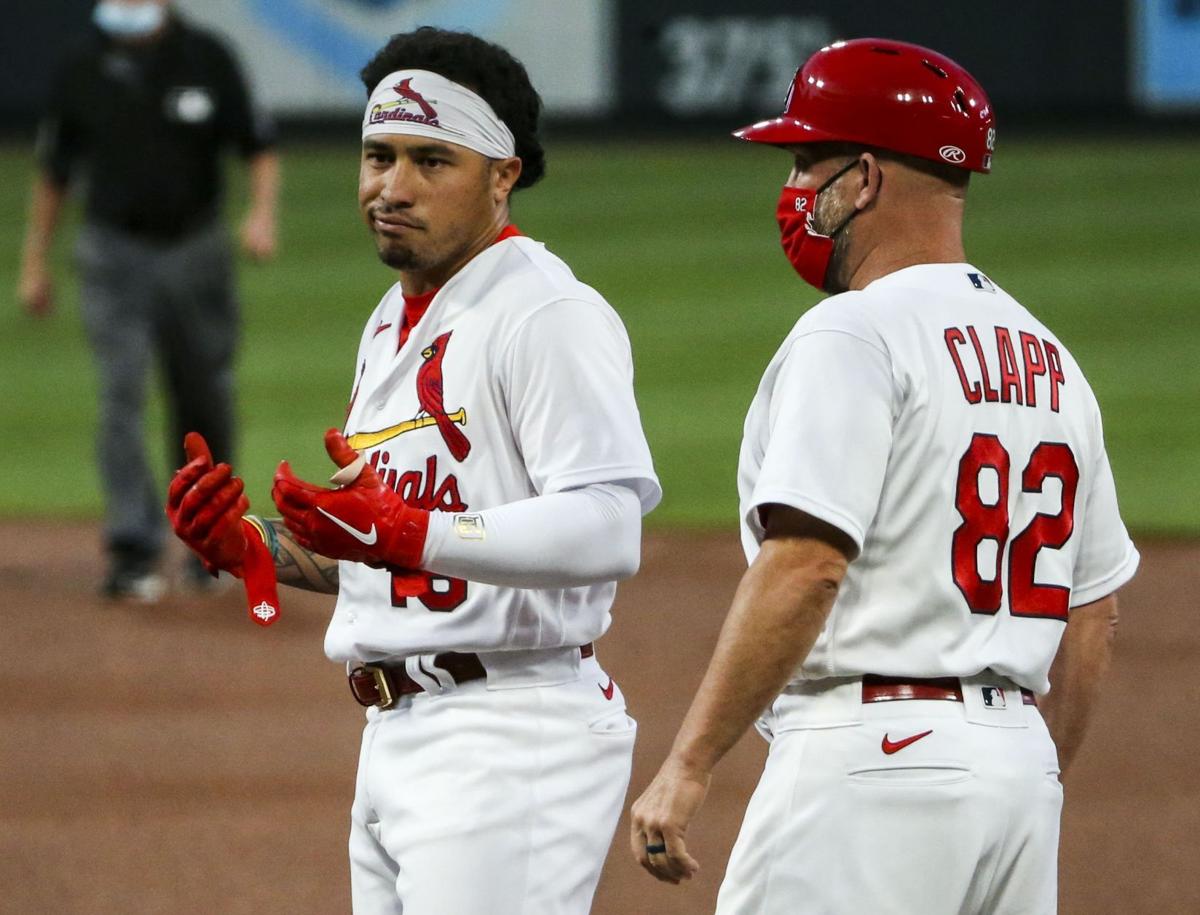 St. Louis Cardinals second baseman Kolten Wong (16) talks to first base coach Stubby Clapp (82) after getting a hit during the first inning of a baseball game at Busch Stadium in St. Louis on Wednesday, Aug. 26, 2020. The game is number seven out of 12 straight home games for the Cardinals as they try to catch up after coronavirus cases delayed their shortened season. Photo by Colter Peterson, cpeterson@post-dispatch.com

Of all the things Kolten Wong chased down, dove for, and got his hands around for the Cardinals this season on his way to a second consecutive Gold Glove Award, the one thing he could not grasp came right after the season ended.

A week before he and teammate Tyler O’Neill had won the highest defensive honors at their positions Tuesday night, Wong caught a call from the Cardinals and learned they would not be exercising his $12.5-million option for 2021.

He was free to steal hits for another team.

“Such a punch to the gut,” Wong said Tuesday night from his home in Hawaii. “I gave my heart and soul to the organization. Working my way up, learning, going back to the minors, and then to battle, to work, to figure things out, and to fight my way back up — that was everything to me. I know I can be better. And just as I’m starting to figure out what my game brings to this new age of baseball.”

Since free agency opened this past weekend, Wong has heard from at least a half dozen teams with interest. A source previously confirmed the Los Angeles Angels as one of those teams.

The Cardinals have not circled back to try and re-sign their second baseman, though they did ask Wong if he would keep that option open. An official said they hope to talk to Wong as the free-agent market develops. Wong said he “absolutely” would welcome a conversation with the Cardinals about a return and is “not closing that door.”

Any other year and Wong’s option would have been a push-button decision, but coming off the shortened season and reduced revenues the Cardinals sought a certain way to cut payroll. They could immediately reduce the 2021 payroll by $11.5 million after the $1-million buyout to Wong. They also could let the market shape their offer to re-sign him.

Wong was hoping for that conversation, not just a call.

“That was shocking to me because I get it, I get what the season was like,” Wong said. “If they wanted to restructure my contract because of COVID-19, I’m in. Let’s have that talk. If they want to backload my deal, OK, let’s talk. I understand this is a business, and I’m still open to it. Keep that door open while looking at others. I love being a Cardinal. I was there for seven years, and I’ve done so many things with that organization. It’s where I wanted to finish off, in St. Louis.”

A two-time winner of the Gold Glove, Wong has played his way into the award’s nexus — a nimble fielder who has a sterling reputation and the advanced metrics to match.

Due to the abbreviated schedule and teams playing exclusively within geographic regions during the regular season, Rawlings chose to base their annual fielding awards entirely on statistics. A formula created by SABR (Society for American Baseball Research) and adopted by the St. Louis-based Rawlings determined the entirety of the award. In recent years, the formula was a portion of the award and ballots from managers and coaches at the major-league level was the heft of the voting.

Paul Goldschmidt was a runner-up at first base. Cubs first baseman Anthony Rizzo won the award this season, the fourth of his career.

Wong led all National League second baseman with 129 assists, and no other fielder at his position had more than 90. He was tops in double plays turned (29), and when it came to advance metrics the 30-year-old infielder led all second baseman in Defensive Runs Saved (six), Defensive Wins Above Replacement (4.5), and Ultimate Zone Rating (7.5). He committed two errors.

Wong ties Fernando Vina with his second Gold Glove at second for the Cardinals.

The shift to a stat-based race vaulted O’Neill into the mix because his advanced metrics ranked well against center fielders and dwarfed many of his peers in left.

O’Neill won his first career Gold Glove in part because of his four Outs Above Average, which tied with teammate and center fielder Harrison Bader for the 12th-best among outfielders at any position. O’Neill led all left fielders; the next closest had 1 OAA. He did not commit an error in 344 innings, and he had 89 putouts in left field. That was the most in the National League, and Wong joked Tuesday: “No wonder it felt like every ball out there was hit to him.”

O’Neill is the first Cardinals outfielder to win the Gold Glove award since Jason Heyward (2015), and he joins Jim Edmonds, Curt Flood and Willie McGee as outfielder winners.

“I think I really shine when people see the amount of groundballs I get to, the amount of range I have, and if you rely on teams in the west or east that may not see you all the time it’s a tossup if you get that love,” Wong said, explaining how he welcomed the move to stats only. “The stats levels the field. But it does make it close. I’ve told everybody that I want to win this many years in a row, but these kids are going to make it tough for me.”

Wong and O’Neill are both eligible to win the Platinum Glove Award as the best fielder at any position in their league. That honor has been monopolized by Colorado third baseman Nolan Arenado, who won his eighth consecutive Gold Glove on Tuesday.

The Cardinals have won 91 Gold Glove awards since the honor began in St. Louis in 1957. That is the most in the majors, by more than a dozen.

It’s in St. Louis where Wong learned to cherish the award.

“I wanted to bring a World Series there because St. Louis is all about the World Series,” Wong said. “We all know that. That’s the place I came up, grew up, met Jose Oquendo, and got to understand what I could do on defense, be around the great fielders they have. And if winning a second Gold Glove is the last thing I do with the Cardinals that is fitting. … That is one thing I’ve been sitting back and soaking in — do I go out now and find that the best place for me is to go back home, or is the best place going to be one that is excited to have me?”

In a summer-long simulation of 2020, data-driven Cardinals thrive, pitch way to NL pennant. So, what gives?

Back in March, the Post-Dispatch asked Dynasty League Baseball to run a sim of the Cardinals season, in case one didn't happen.

One solution at multiple positions is to shop for complements, not more commitments.

St. Louis Cardinals second baseman Kolten Wong (16) talks to first base coach Stubby Clapp (82) after getting a hit during the first inning of a baseball game at Busch Stadium in St. Louis on Wednesday, Aug. 26, 2020. The game is number seven out of 12 straight home games for the Cardinals as they try to catch up after coronavirus cases delayed their shortened season. Photo by Colter Peterson, cpeterson@post-dispatch.com